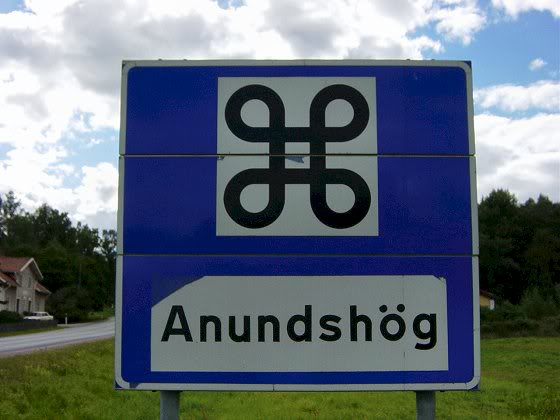 Just outside Västerås, on the eastside of the city, is one of Sweden's most remarkable ancient monuments : Anundshög. Anundshög is a royal tomb from the 6th century, the largest of its kind in Sweden. It's a fantastic place to visit; if you are into these kinds of places that is. Some of you might describe it as dull, but I found this place so fascinating! You will get close to part of the life of the Vikings.

Nearby to the burial-mound of Anundshög there are a number of large grave mounds which indicates that this was an important meeting place for several centuries. There are also two very large stone-ships, graves in the shape of a Viking long ship. And last, but not least, there is also a runic stone from the middle of the 11th century.

There are signs from Västerås that direct you to Anundshög, so this historical site is not that difficult to find. 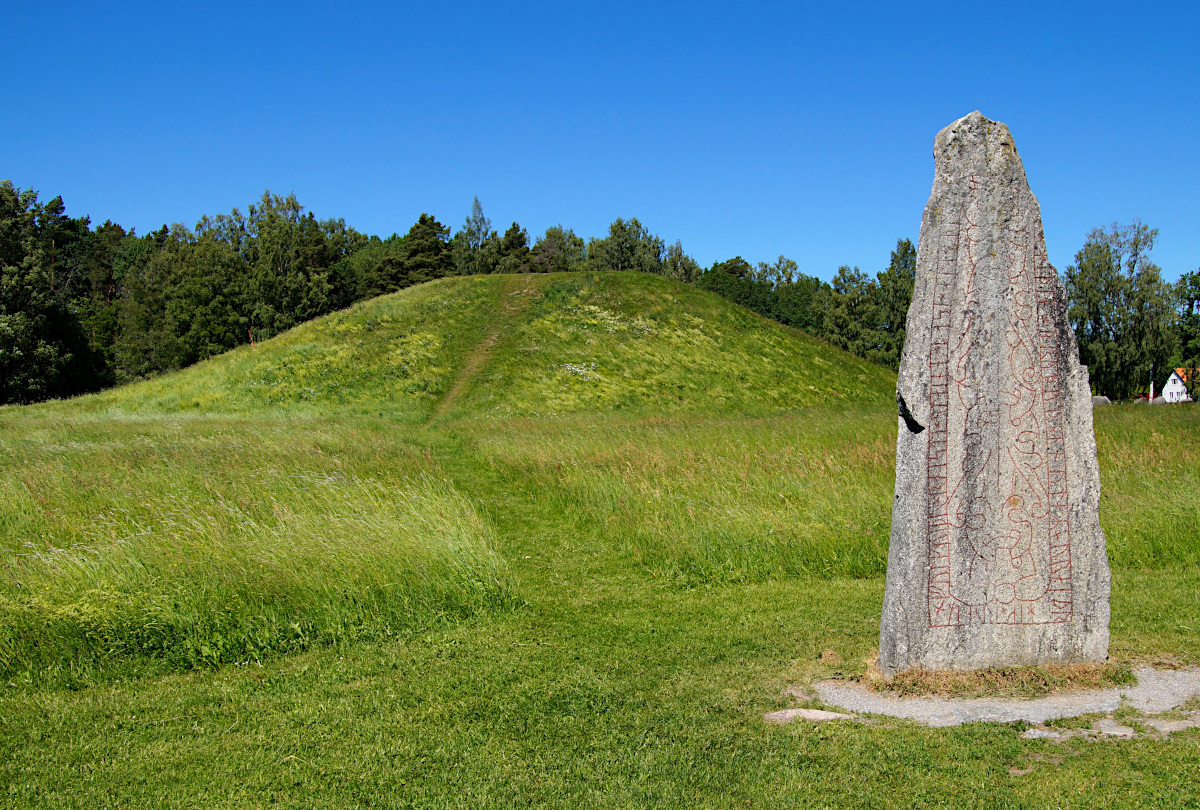 The first thing I want to show you is the runic stone at Anundshög. The stone is quite large, I don't know the exact size, but it is well over 2,5 meters high. The runic stone was erected during the first half of the 11th century and bears the inscription:

"Folkvid erected all these stones in honour of his son Heden, the brother of Anund. Vred carved the runes."

Folkvid was a prominent man in Badelunda and he paid for this runic stone. The remarkable thing about this runic stone is its unique engraved picture, which maybe shows a man and a woman holding each other tightly.

In the background of the picture, behind the runic stone, you can see the burial mound.

You can still see many runic stones in Sweden, although most of them are in Södermanland and Uppland. Runic stones are high stones, standing up, and have rune signs. They are related to the stones with decoration (mostly with a motive from the Nordic myths) or also to stones without any inscriptions. The runic stones often were erected as a memory for people who had died in a battle. The majority of inscriptions, more than 90%, were made during the 11th century.

The runes themselves are an old form of Germanic writing, which originally were being scratched into wood, but later also into stone, ivory and others. 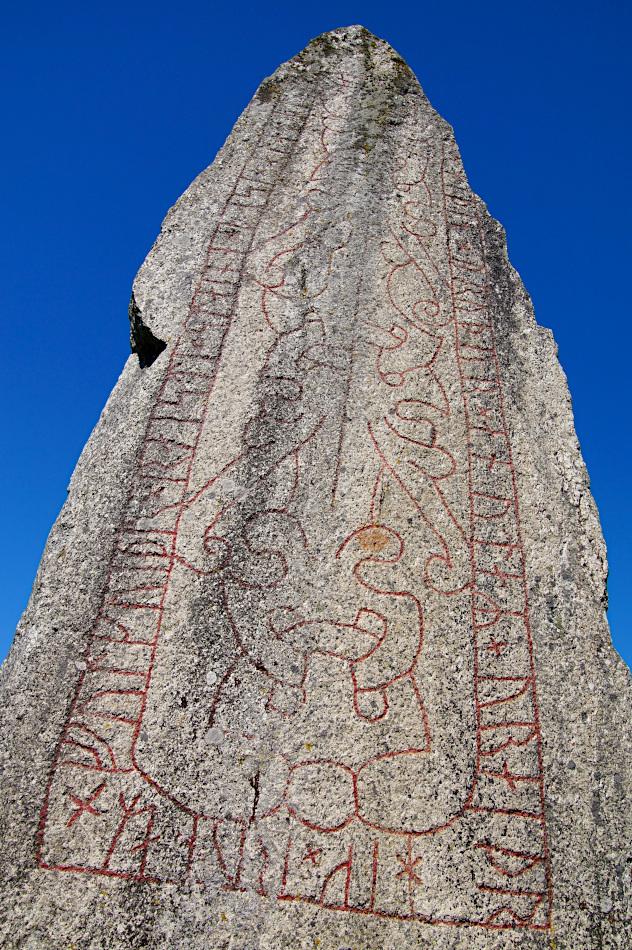 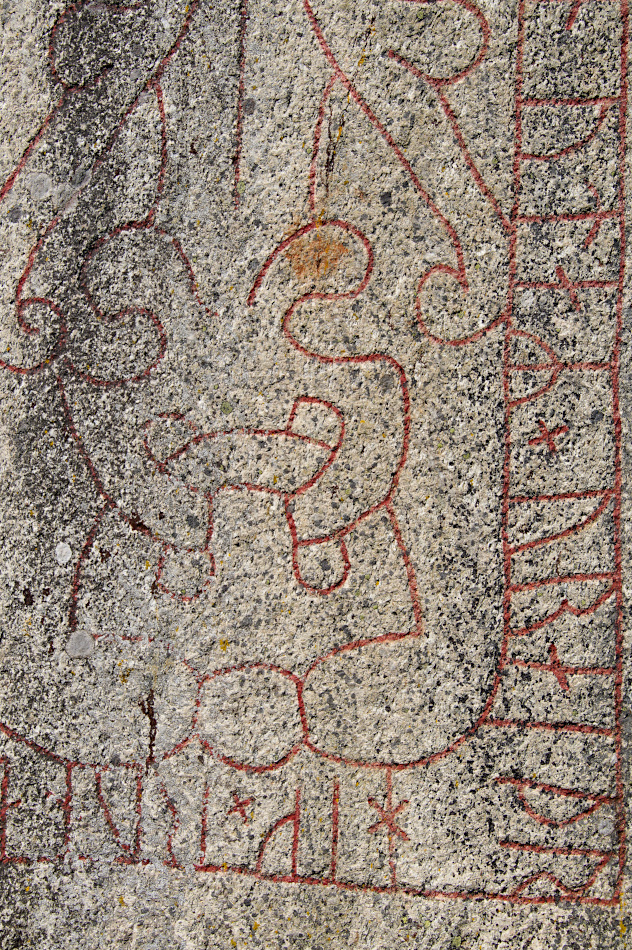 The route of the king 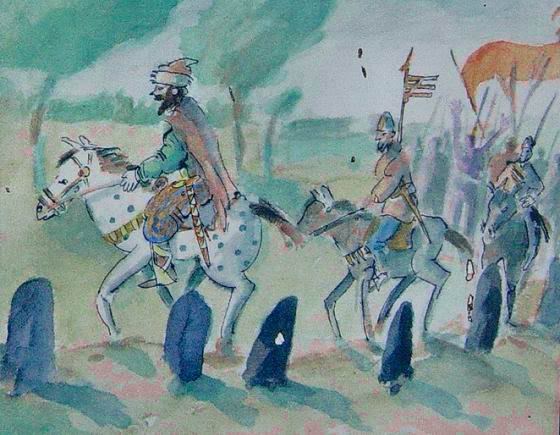 the route of the king

But paying for the runic stone (see previous photo) is not all that Folkvid did. He also paid for the road to be built passing Anundshög and marked it with a row of monoliths. The road was to be used when the newly crowned king rode through his realm to receive the homage of his people. The monoliths are still there, and you can just imagine people travelling here in those times.

I took a picture of a drawing at the historic site of Anundshög. There are several interesting signs at Anundshög explaining its history, both in Swedish and in English. 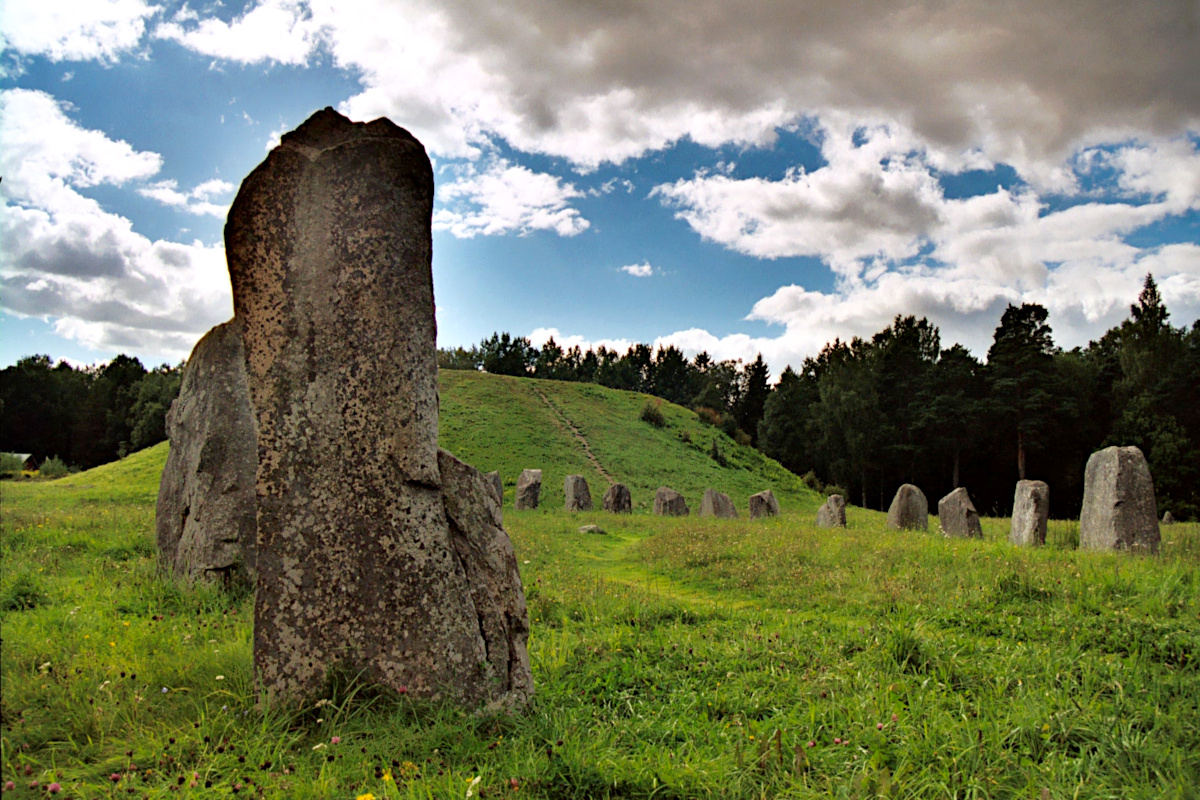 the route of the king

Anundshög is Sweden's biggest burial-mound. This photo is taken from the stone-ships towards the burial-mound. The burial mound is huge! Anundshög itself is about 9 meters high and has a diameter of 64-68 meters, which makes it the greatest grave-mound in Sweden.

One thing you have to do is climb up the burial-mound; you can either take the stairs on the backside of the hill, or, be foolish like me, and climb up the hill on the front side. The burial-mound is quite steep, so that makes it quite a climb ;-) Climbing up here though makes you realize how big the burial-mound really is and gives you a fantastic view over the stone-ships.

The burial-mounds were probably built over cremation sites, where the dead body was cremated together with the burial gifts. It is unknown who was buried here, but it was probably a very important man; perhaps a king. 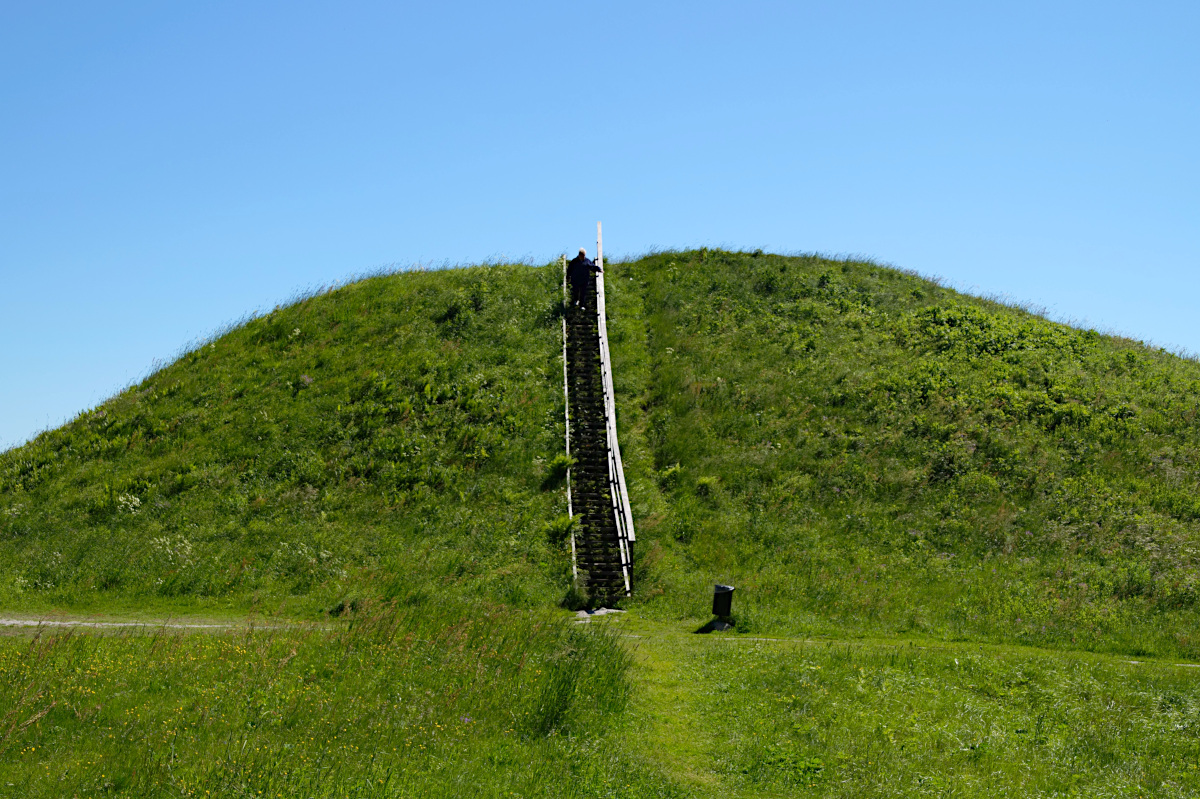 The largest tumulus is Anundshög is from the late Iron Age, between 500 - 900 AD. In 1788 some brewery workers from Västerås began digging in it to plunder the grave. There is no information that points to any finds, as they did not manage to dig all the way to the grave itself.

The first archeological investigation was done in 1998, at which time exploration drilling was done and two shafts were dug in the northern and southern parts of the mound.

Evidence was found showing that the tumulus has been built on an older settlement site. The bottom layer of the tumulus was clay and funeral pyre has been laid on it. Then the whole had been covered by a rock mound to a depth of 4,5 metres and a 37-metre diameter. This done, the mound was covered by earth and sod, in all en effort that would have involved a large number of workers. 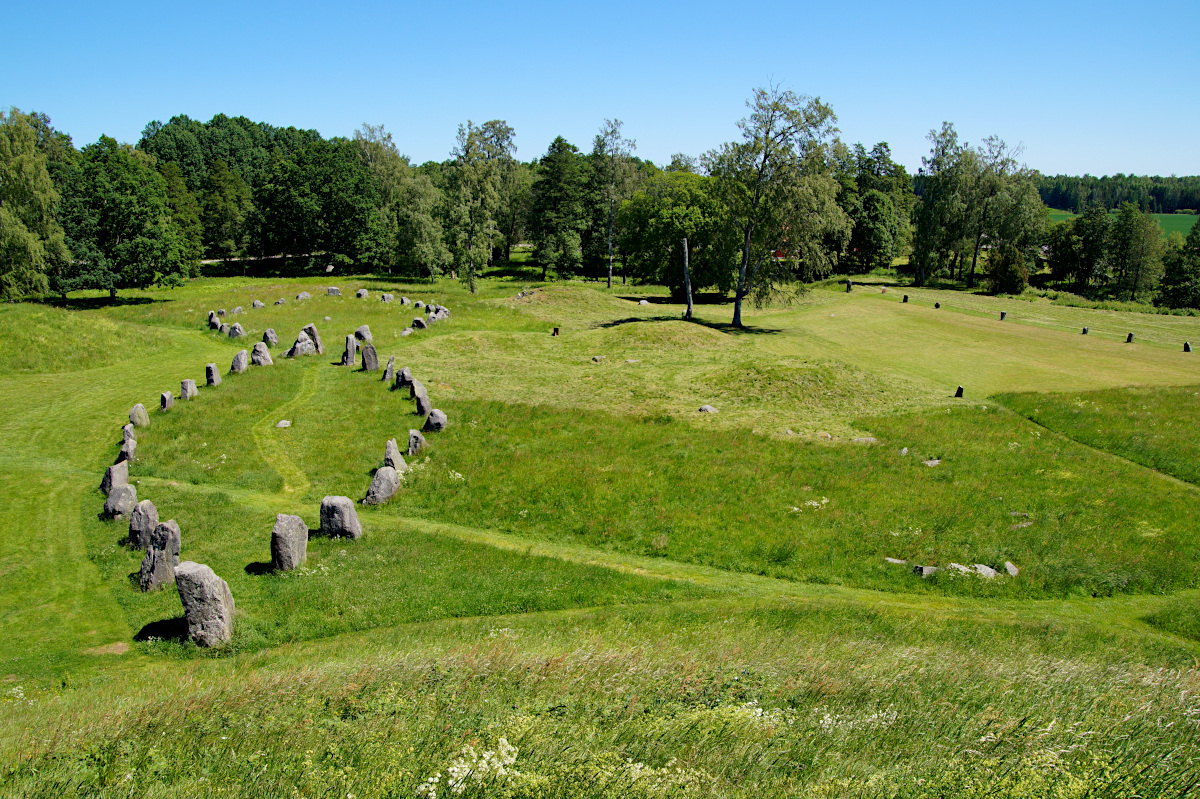 Overview over Anundshög, with stone-ship on the left, stones marking the ancient road to the very right

The ancient monuments surrounding the Anundshög tumulus provides clear proof that the area was the centre of power during the iron age (500 BC - 1050 AD). From here the local king would have controlled all communication in the proximity and would have access to large land areas suitable for stockbreeding. As there was no direct contact to the sea, the place was rather well protected.

The road, here marked by standing stones, would have been used by mighty retinues meeting and passing by on royal tours of the domain during the late Iron Age and early Medieval period.

However, in the beginning of the Middel Ages, it seems someone meant to eradicate this locus of power. The stone ships were destroyed, the rune stones overturned and the royal demesne that must have existed here was broken up. Today not even the name of the estate is preserved, having been replaced in medieval times by the name of the Tumulus: Anundshög. 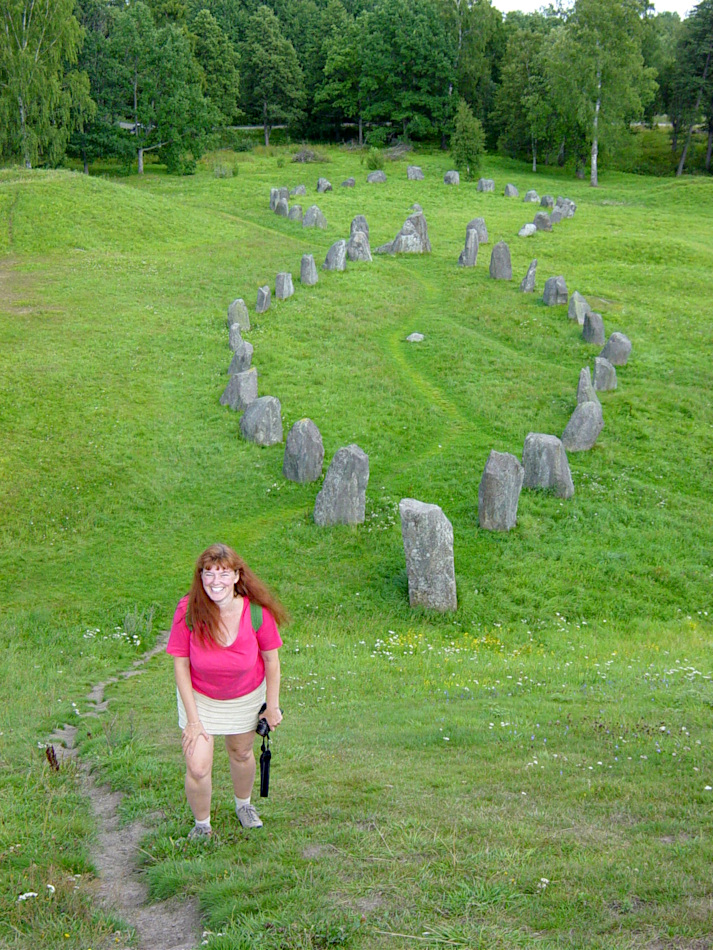 This is me climbing up the burial-mound I mentioned above. Behind me you can see two of the five stone-ships at Anundshög. The two stone-ships you see here are the biggest and most impressive ones.

The stone-ships are amazing in size and in way they are build. The stones are placed in a perfect symmetry around the major axis and it amazes me how they did that. The sides of the ships take the form of bow shaped arcs. The wider of the two ships is 50.8 meters long and 24.7 meters wide, which makes it exactly half as wide as it is long. From the top of the hill you have an excellent view over these two stone-ships. 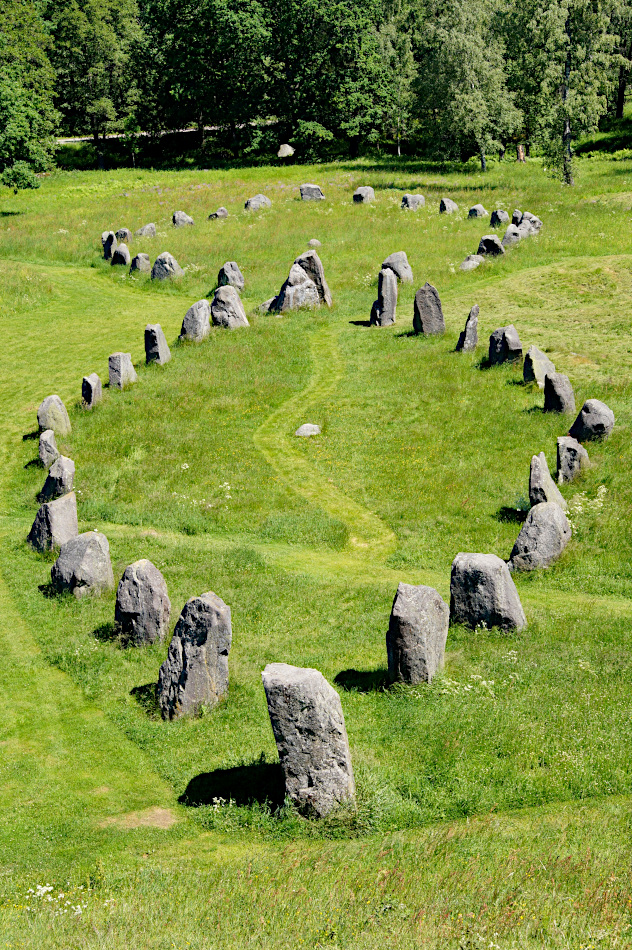 There are five stone settings in the vicinity at Anundshög, making it the largest concentration of stone shipsin Sweden. These stone ships resemble the Viking's ships and in this photo you can see two of these stone-ships.

The stone-ships at Anundshög are two of the largest built in the form of ships in the first century A.D. There are three other smaller stone-ships in the area. The graves have not been excavated, but they were probably built in memory of great men and important boat-owners. The stone-ships symbolised the real ships on their way to the kingdom of the dead, perhaps to honour a chieftain who died in a foreign country. 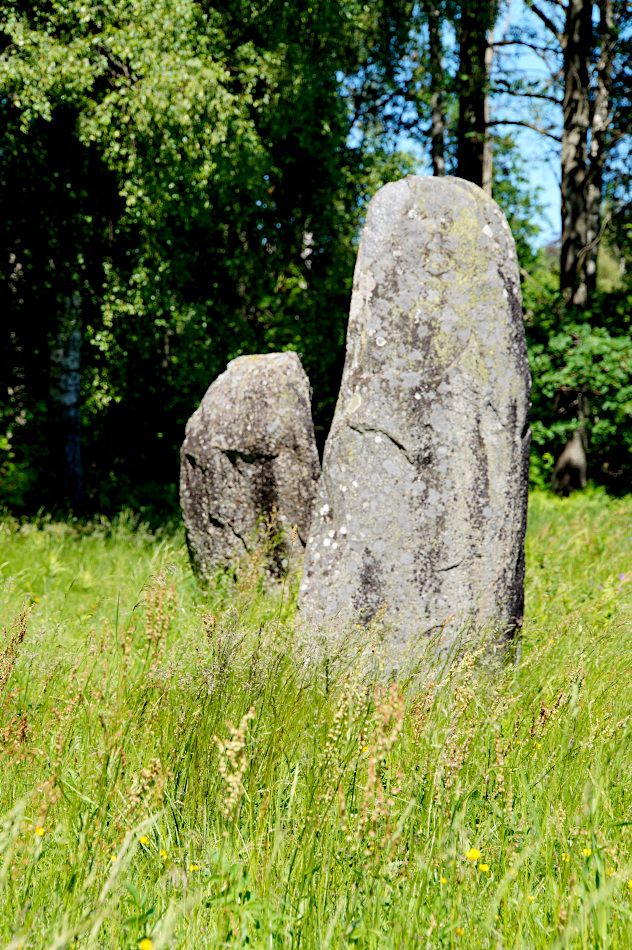 A stone ship consists of raised stones placed in the form of a ship. Such formations are typically Nordic ancient monuments mostly found in burial fields.

No one knows for certain however why these stone ships were built. According to existing documents from the mid 1600s the stones had all fallen down. It is likely that the monument was associated with the pagan religion and destroyed as Christianity developed. The stones remained down until 1932 when work began on restoring four of the stone ships.

Burnt bones and ceramic shard were found close to the stone nearest to the Anundshög tumulus. This may have been a grave. Each ship has a central, so-called mid-stones in the shape of a circle probably placed there to symbolise the ships mast. 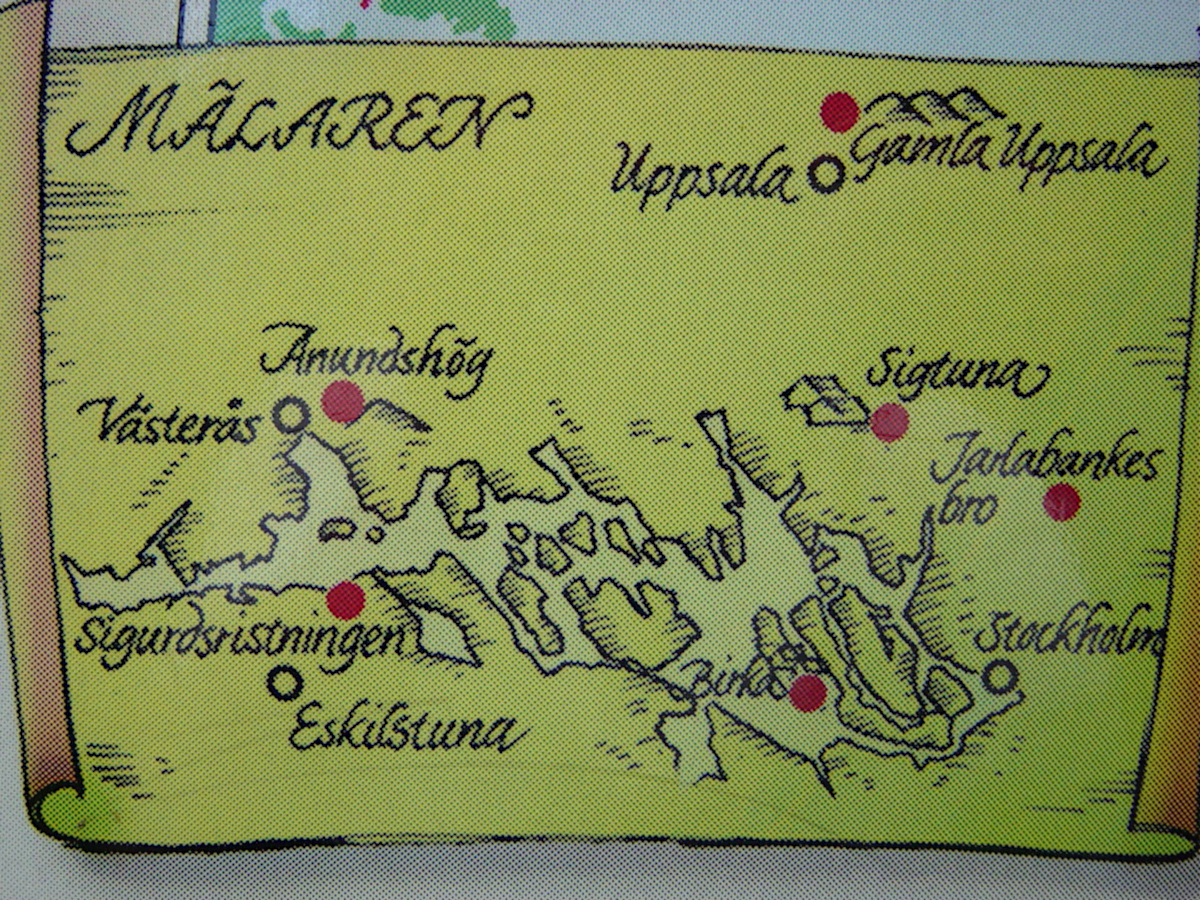 I found this quite an interesting map which shows some important sites for the Vikings in the area of Mälaren. Anundshög (where we are now) is on this map, and this location is included in the European Council's Viking Route. There are other locations in Mälardalen included in the Viking Route, the nearest on this map being Sigurdsristningen. And at the Sigurdsristningen is where I live! This important historic place is only a 10 minutes walk from my home. There is lots about these rock carving on my Sigurdsristning page. So if you are interested in the Vikings or runic stones this is a page you shouldn't miss!

Other interesting places on this map are Birka and Sigtuna, both are still on my travel wish list, but I hope to go there next summer. The Vikings were real tradesmen and travelled all over the globe. There are traces of them from Canada in the west to Russia in the east. 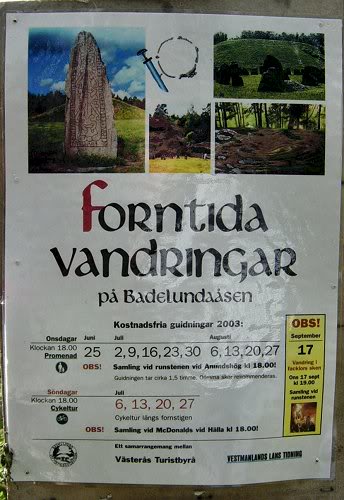 During the summer months there are guided tours at Anundshög. The walks take about an hour and are held during the months of June, July and August. I haven't been on a guided tour myself yet, but if you are in the area that time of year it might be interesting to check it out. You can get more info about the tours at the tourist office in Västerås, https://visitvasteras.se/, or read about it (like I did) at this sign at Anundshög.

The area of Anundshög is always open however, so you can visit whenever you like. You can do a sort of self-guided tour by reading the signs.

Do you want to know more about Vikings?

I am rather fascinated by the Vikings and the traces that they left here in Sweden. Maybe it is because I live so close to a Viking site that I am so intrigued by it. One day for sure I will wite a page focussing on the Viking era, but for now let me link to some of my pages where you can find some more photos of this part of history:


 Sigurdsristning at Sundbyholm, one of Swedens most famous Viking Monuments
 Gripsholm, with a very interesting rune stone (Ingvar runestones)
 Rök, the most famous of rune stones
 If you are interested in viking history I can warmly recommend a visit to Swedish History Museum / Historiska museum in the heart of Stockholm as well.