And in this daytrip we are REALLY going off-the-beaten-path! I guess this is one of those ultimate 'off the beaten path places', where only a few people are aware about. These rock carvings are less than an hours drive from my home, but I had actually never heard of them before, until this sunny day in June 2020. But I am glad I stumbled upon them, as they are rather special.

The Rock Carvings in Häljesta 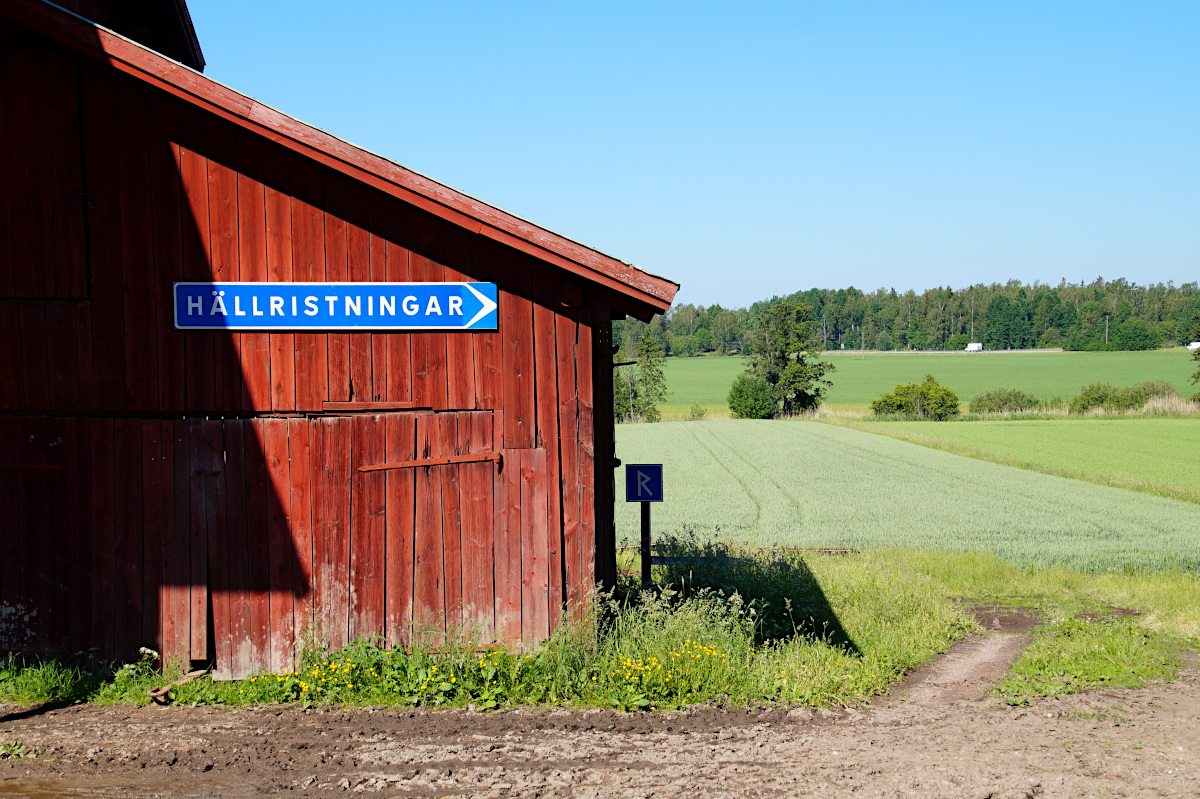 "Hällristning" (the Swedish word for rock carving) sign on the barn

June 2020, the Covid 19 pandemic is making travel a no-go, so I am surfing around on the web to find some inspiration for some close by hiking possibilities. And during my search I came across a website called 'naturkartan.se'. On this website I could click around on a map to find things to do in the area, mainly involving nature and outdoor activities. And all of a sudden I clicked open a photo of the rock carvings, which, of course, immediately grabbed my attention! I have been to the famous Rock Carvings in Tanum on the West Coast of Sweden (one of Swedens World Heritage Sites), but I never realized I had this Rock Carving site 'just' around the corner from my home!

It actually took only two days after clicking on that photo before we were one our way with the car towards Häljesta :-) We had a hike planned on the "Bruksleden" hiking trail during the weekend and a visit to Häljesta would only mean a short detour. We drove into the direction of Munktorp and turned off on a little gravelroad leading us to a farmhouse. If it wasn't for the big sign "Hällristningar" you would never realized the rock carvings were here, hiding behind this red barn in the middle of nowhere. We parked at the farmhouse, where a P-sign indicated that it was ok to park here.

Yes, this is almost as far you can get going off-the-beaten path: parking at the farmers house and walking around his barn, and suddenly seeing the rock carvings at the edge of his farm fields :-) 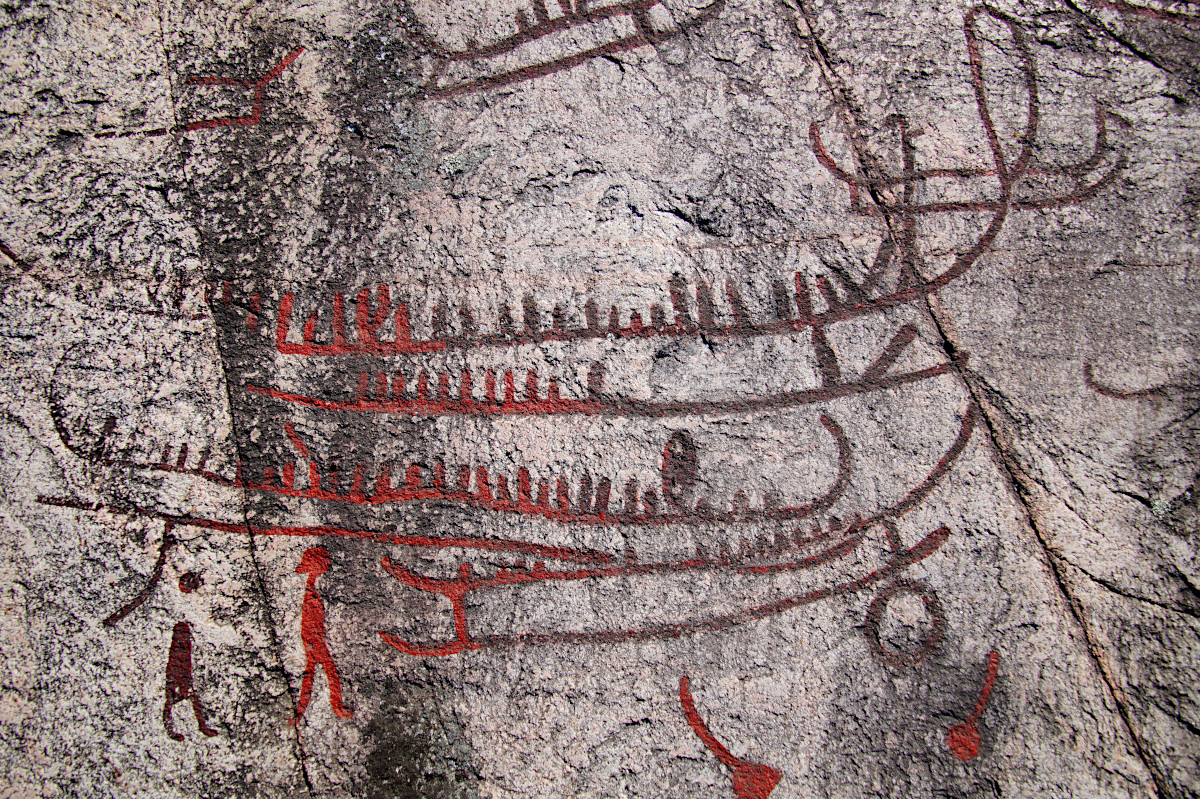 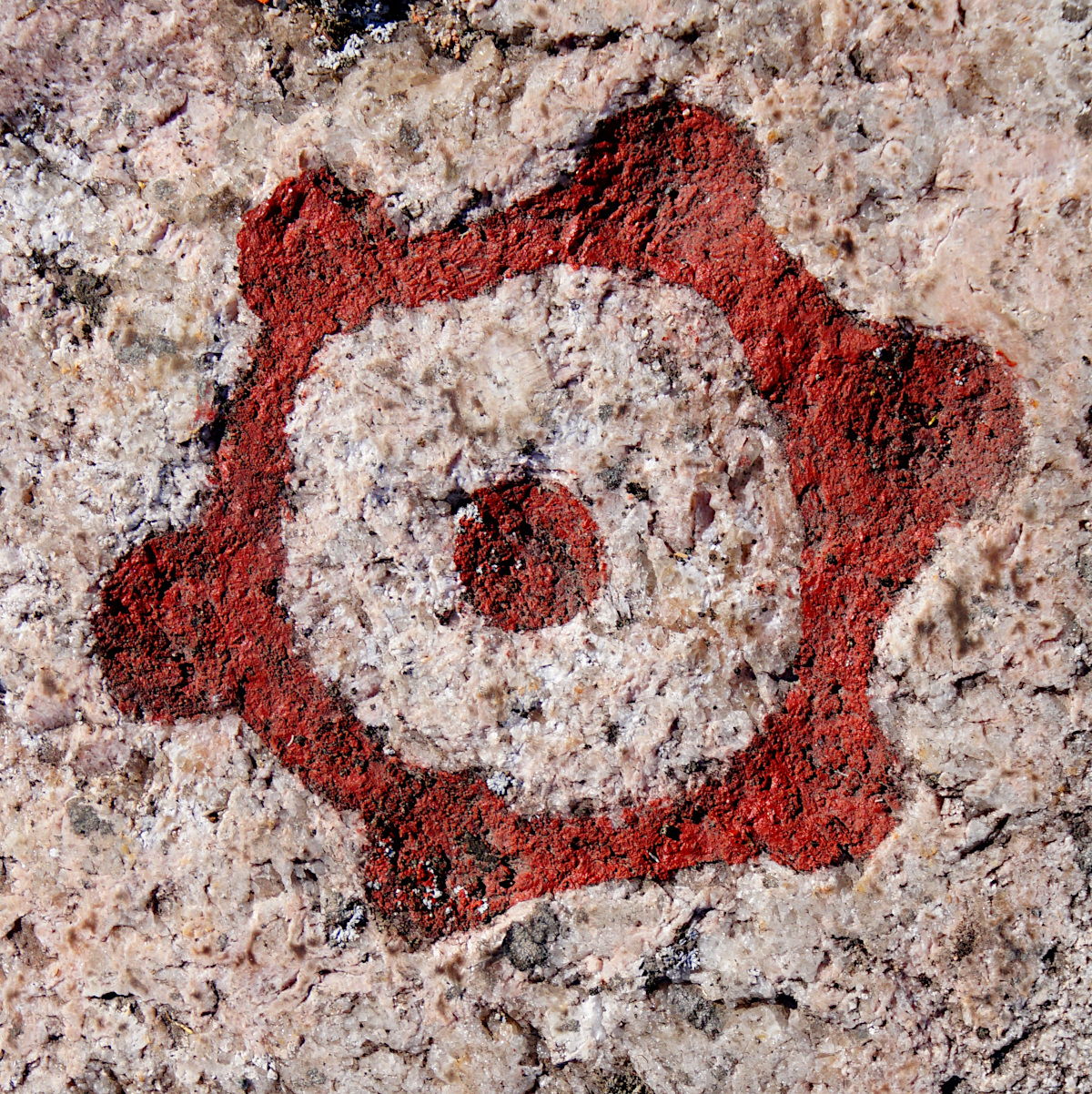 Häljesta has the largest known rock carving area in the county of Västmanland and also one of the largest in the Mälaren area. They were discovered in 1957 by Bengt-Göran Larsson, only a boy at the time, but becoming the farmer here.

On these two rocks you can see around 550 figures, including ships, human figures, ring figures, animal figures, grids and 239 cup and ring mark. The rock carvings originate from the Bronze Age (1500 - 500 Before Christ) when people carved the signs into the rocks. And these carvings often are perceived as a reflection of the religious life of the Bronze Age, which was primarily related to fertility rites. The Häljesta Rock Carvings are from the same period as the famous carvings around Tanum's parish in Bohuslän where there are a lot of similar images.

The Rock Carvings are surprisingly easy to reach as they are really close to the highway E18, west of the city of Västerås (approx 30 km). To reach the rock carving turn off the E18 towards Munktorp at Exit 124. Then drive towards Munktorp. Take the second exit on the right towards Häljesta (there is a sign at this crossing and you will drive onto a little gravel road). Parking is at the barn, and is marked with a parking sign. And as is quite usual in Sweden, no entrance or anything like that are charged when visiting sites like this. 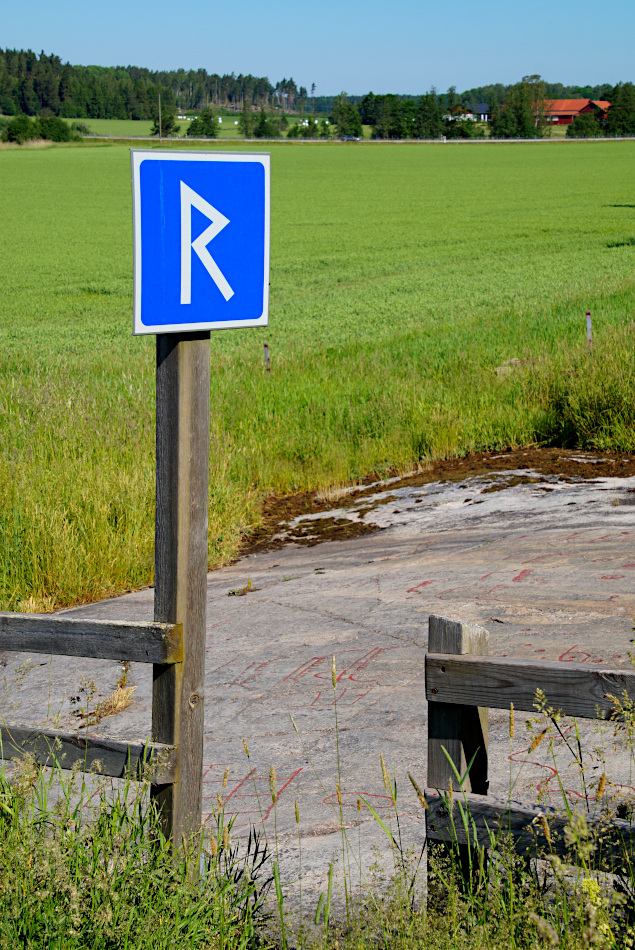 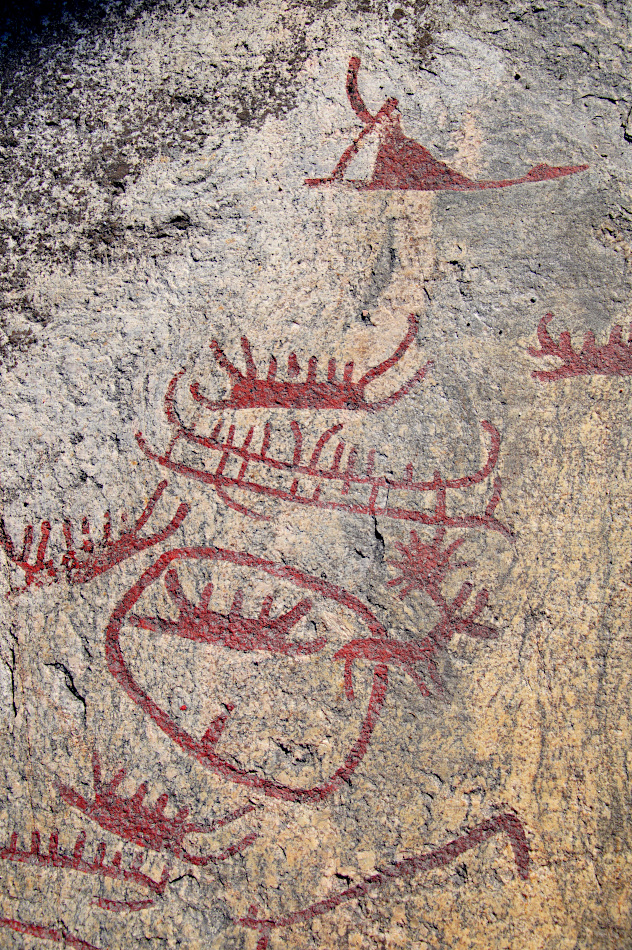 Image a different time and imagine a totally different landscape. Look at the photo above to the left, and then think away the houses that you see in the far distance, and also think away all the trees. And think even away the green fields, and imagine water instead. The fields below the rocks were a bay of Lake Mälaren during the Bronze Age when the carvings were made.

The proximity of the settlement to water was important as the waterways were the easiest, fastest and safest transport routes. The sea level during the Bronze Age was about 15 meters higher than today, which means that Mälaren was a sea bay and the little stream 'Tunabäcken' that runs 200 meters west from here was navigable. 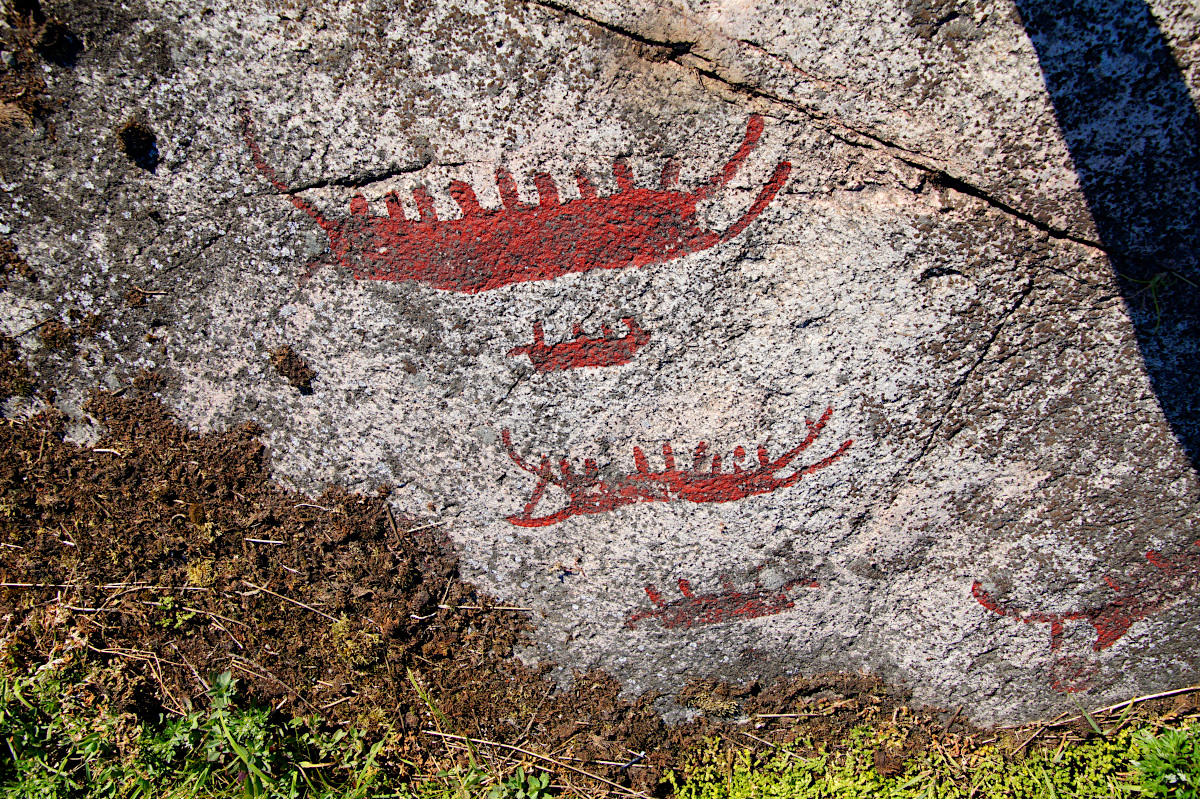 Ships, ships and more ships! In total you can find 125 ships depicted on these rock carvings. In the photo above and the photos below you can see a few of these ships. That these carvings consisting of so many ships is maybe not that surprising considering the location at the edge of the then Lake Mälaren.

Today, there is mainly a consensus that the rock carvings have to do with religion and rituals, but in some cases they probably also reproduce myths and stories. What the pictures mean, however, is and remains largely an open question. The rock carvings are a symbolic language, in which the choice and design of images have followed rules and codes, which were known by the people of the time but which we today cannot interpret with any certainty.

Some people assume that since the gods could not be depicted on the carvings, they were drawn as ships. The ship image is thus in fact synonymous with the highest divine. 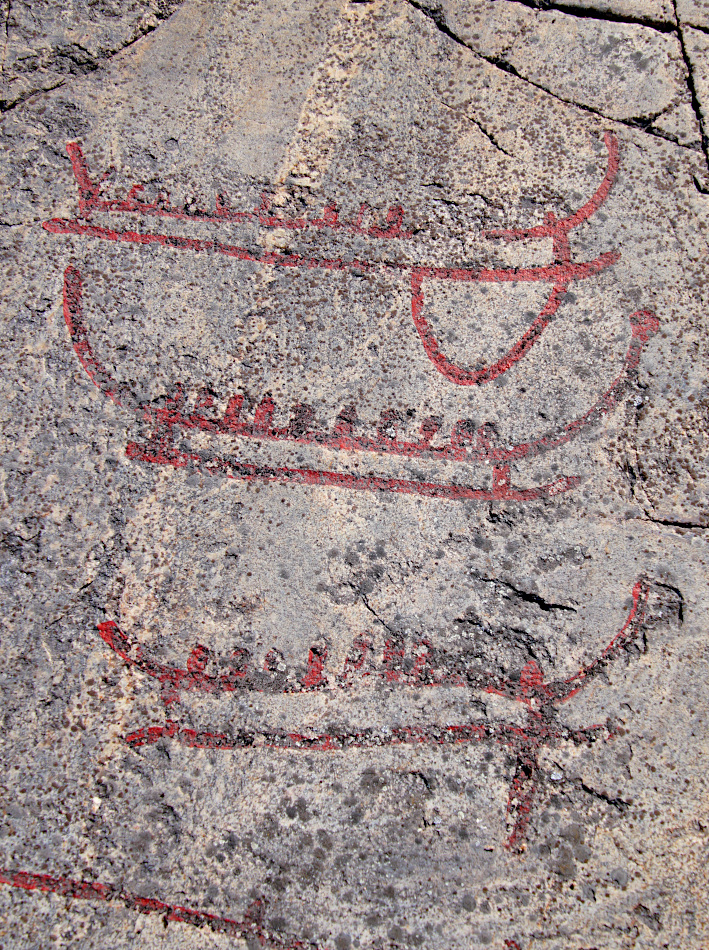 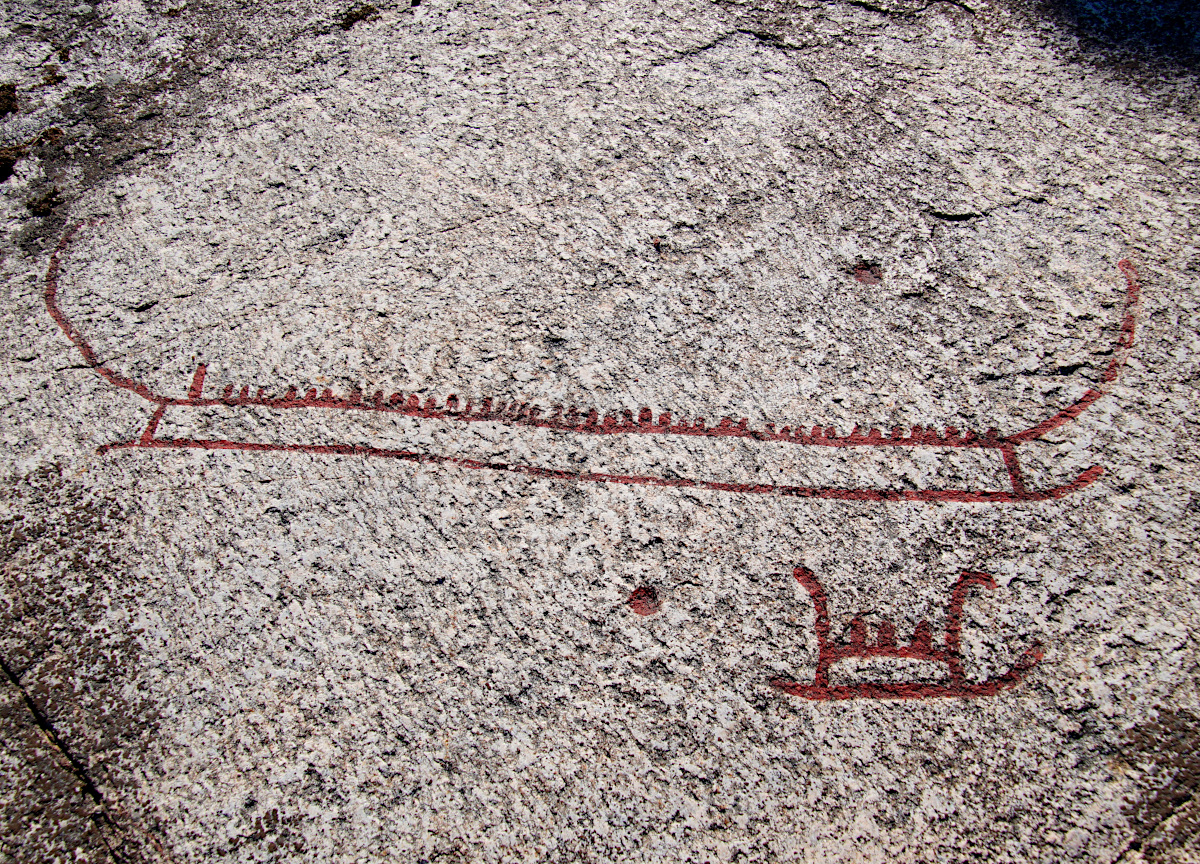 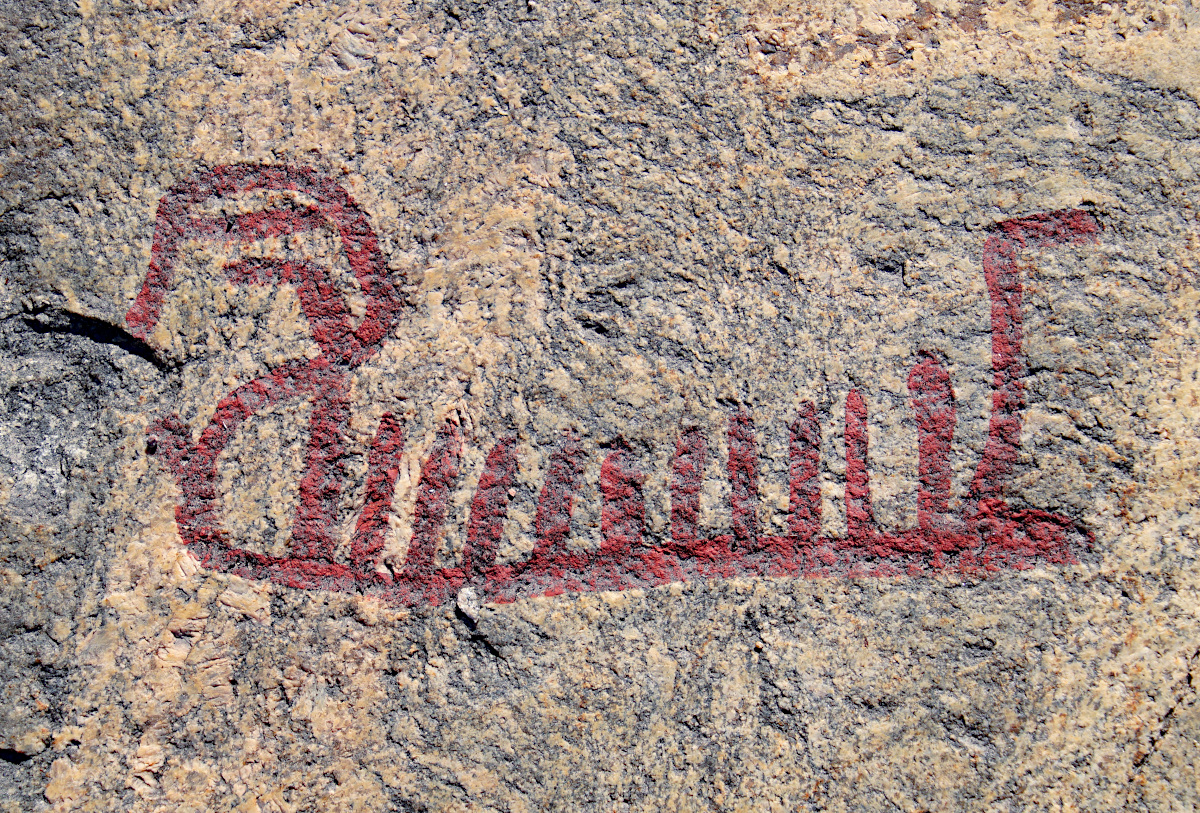 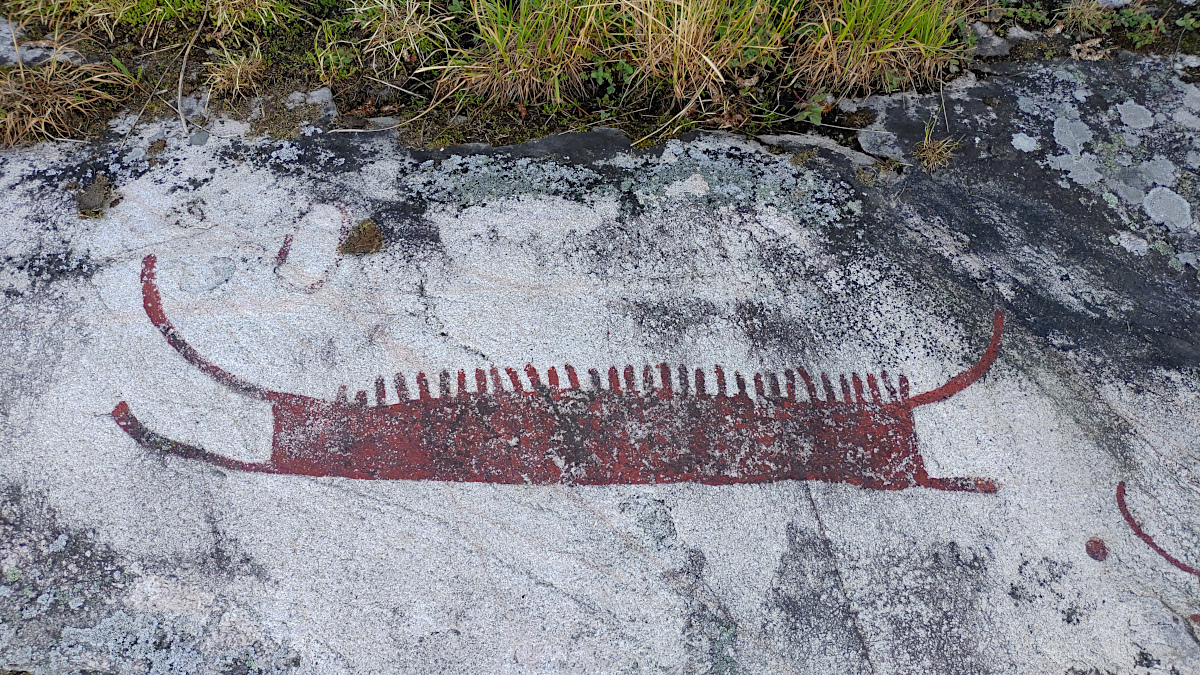 But besides these ships there are also 49 rock carvings depicting humans and 7 animal figures. And some of these are quite unique for the Häljesta Rock Carving site. 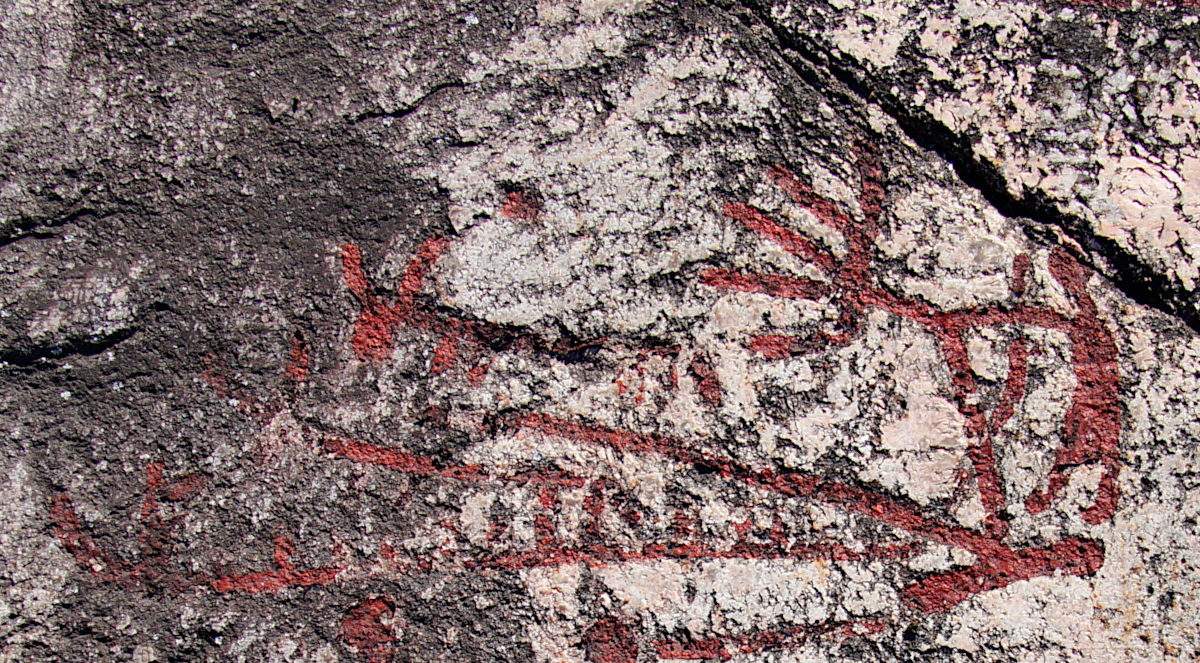 The southern rock contains most of the unusual figures, including a plowing scene depicting two horned animals (probably oxen) pulling a plough (photo above). The plough is controlled by a human with supernatural large five-fingered hand. Scenes of this kind are very unusual in Sweden and this is the only one known so far in Mälardalen area. The scene is a sign of fertile farming in the area. Another interpretation of the scene is that the farmer holds a tree shrub in his hand when plowing the first lap of the field. It would pave the way for good harvest.

During the Bronze Age the climate was much warmer than now and the tame cattle you could go out year round. Humans lived relatively in the same spot with livestock and farming as the main source of nutrition, but hunting and fishing as well as the collection of wild plants, fruits and nuts, was an important nutritional supplement. 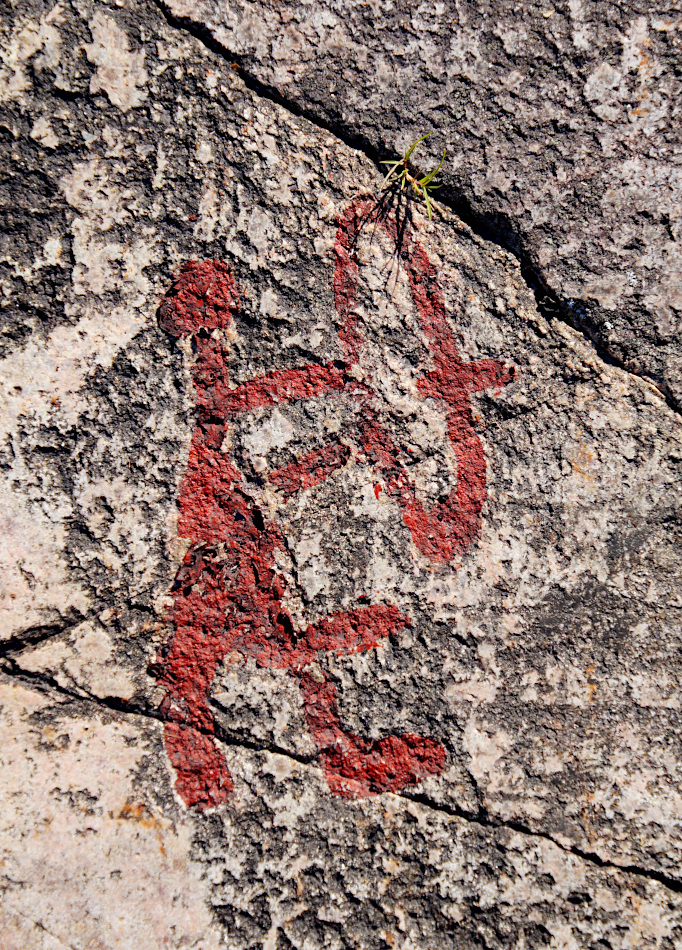 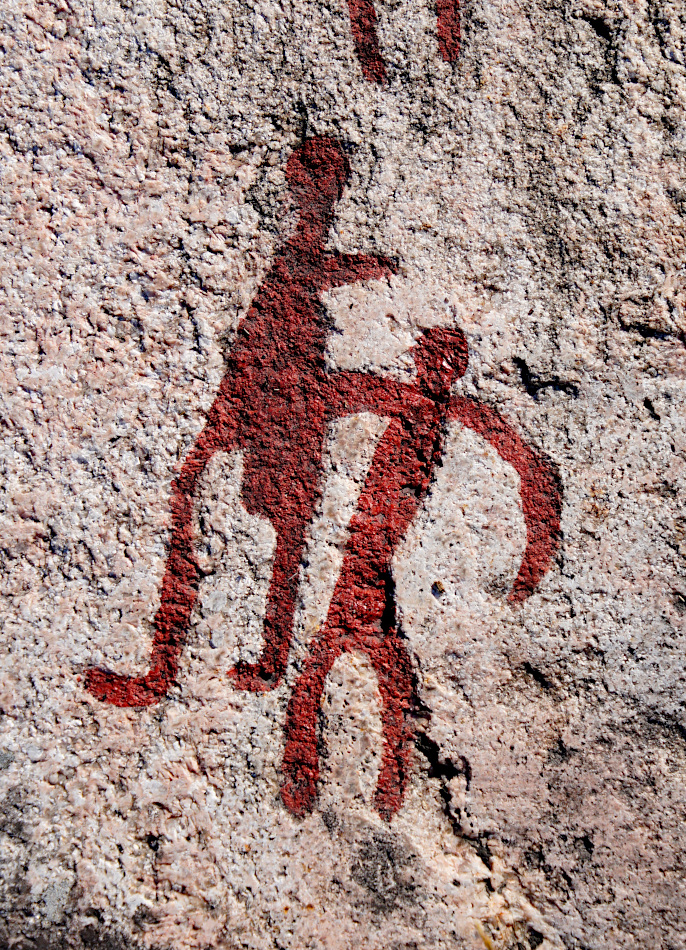 On the northern rock you can find another very unusual figure: an archer with clearly marked phallus (see photo above left) 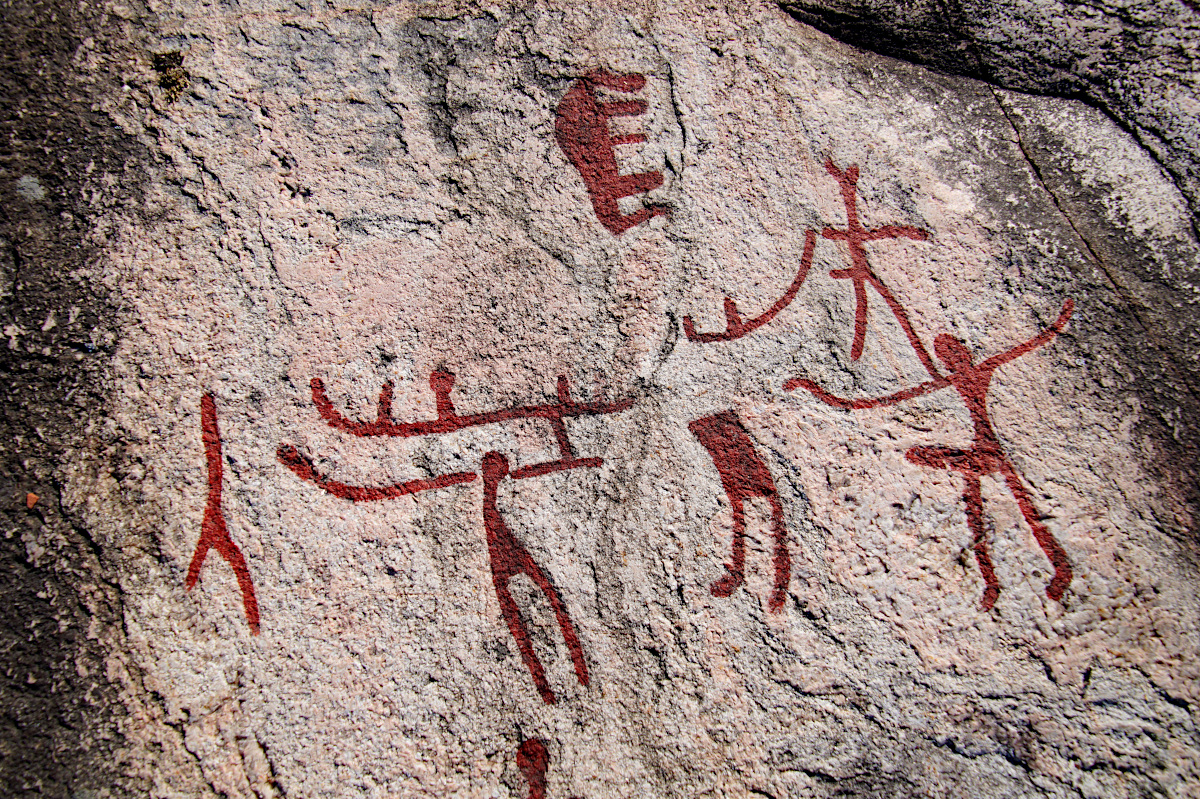 If you have seen a rock carving in Sweden before, it most likely has been filled with red paint, but this colour is not original. It has been filled in by archaeologists to make the rock carvings visible. Whether or not they were coloured during the Bronze Age, we do not know; no such colour residues are left today. Maybe the pictures were not meant to be seen? Some scientists believe that the important thing for the people of the time was the very act, to carve pictures in stone. Maybe it was a kind of ritual or a way of showing presence in the landscape.

And I guess that is the fascination of seeing these rock carvings: imagining how these people lived in their time, how they thought, how their world was like. One can only imagine and guess how life was like all those thousands of years ago. But seeing these rock carvings and touching the surface where they carved these images into the stones, builds some type of bridge between their time and ours, and gives a little glimpse into their lives.

If you are in the area I can warmly recommend to make a small detour from the main highway E18 and make a short stop here, and get in touch with Sweden during the Bronze Age.