Strange isn't it how long it sometimes takes before you visit a place, especially when it is 'just around the corner'. I pass Vallby Open Air Museum almost daily while commuting to work. All I need to do is take a few exits earlier from the main road to get here. But, now don't laugh, it has taken me over 15 years before my first visit! But it certainly will not be the last :-) 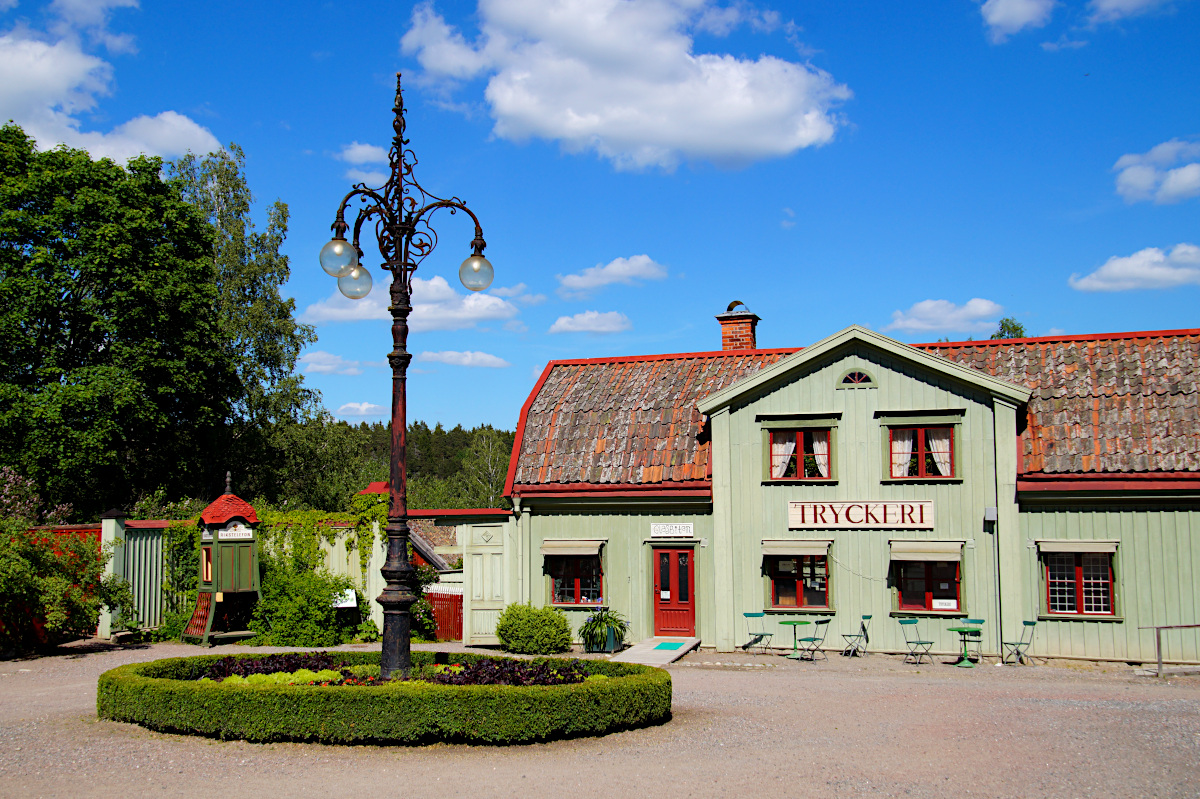 The Print Shop in the City Quarter

So why did it take me 15 years to go here? Well, I guess I never realized how big this Open Air Museum is! It is one of Swedish biggest Open Air Museums and there are around 40 historical buildings here. And amazingly enough you do not need to pay any entrance fee. It all started in 1921 when the museum was founded to present a picture of how life was like in the county of Västmanland.

We picked a gorgeous sunny day in the middle of June to visit the museum. Enjoying the fine weather we slowly strolled along the paths through the museum area and arrived at the recreated Town Square, the part of the town that used to be the heart of the community. Such squares used to be lined with shops, and market days were held regularly on these town squares. This square (photo above) is a cosy place, with a restaurant on the one end, an old clock decorating one of the historical buildings and a typical phone box dating back to the beginning of the 1900s in the corner.

In front of us is the "Tenngjutaregården" building with a big sign "Tryckeri" which means Print Shop. This house was build in the 18th century and originally comes from this very city: Västerås. It was located rather close to the city center in the road "Kopparbergsvägen" and was moved to the museum in the year 1922. Like many houses in Sweden, the exterior was previously painted in the typical Swedish red-colour. But in the 1850s the house was covered with a panel facade, giving it its current look. Inside it houses the museums print shop and two artisans shops. Unfortunately due to the Covid19 epidemic all the houses are closed, and we could not take a peak inside. Originally this house was the residence of a wealthy family. 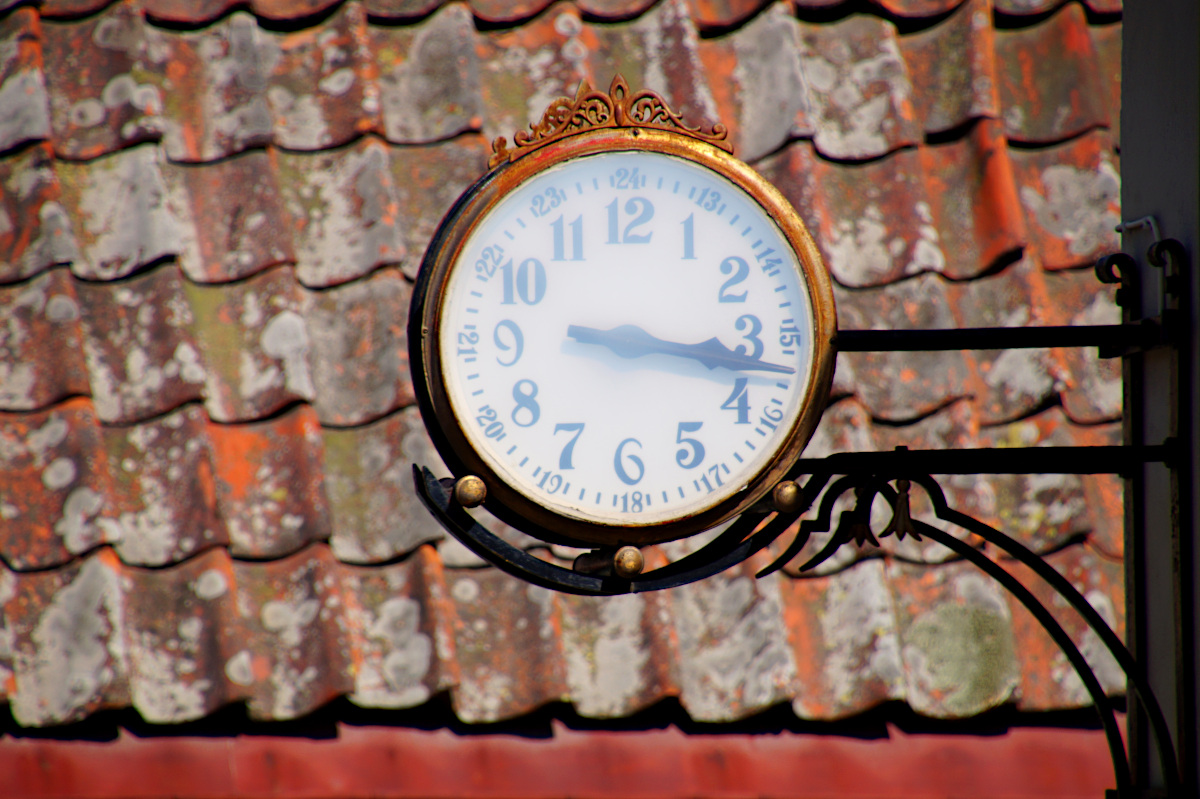 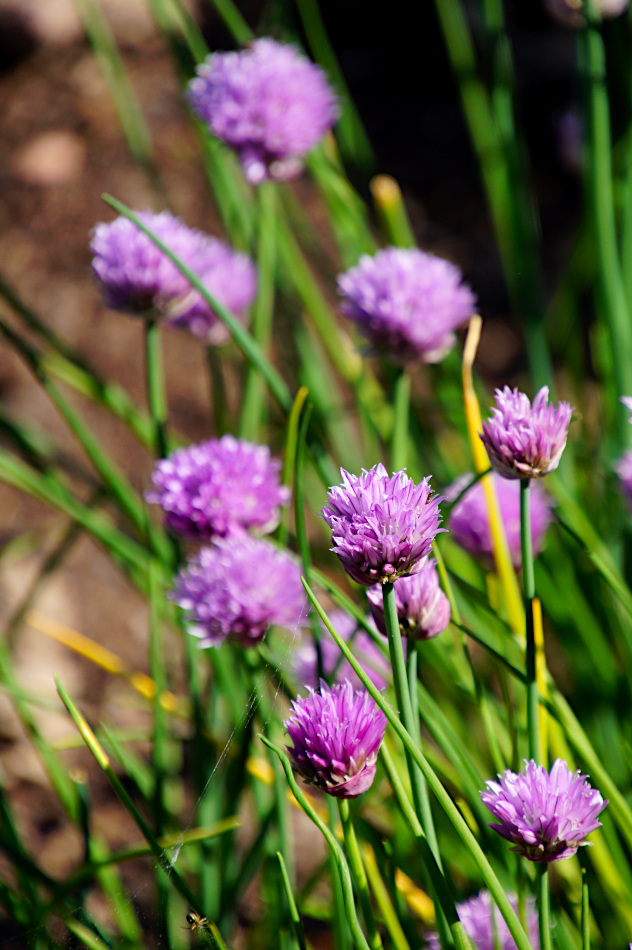 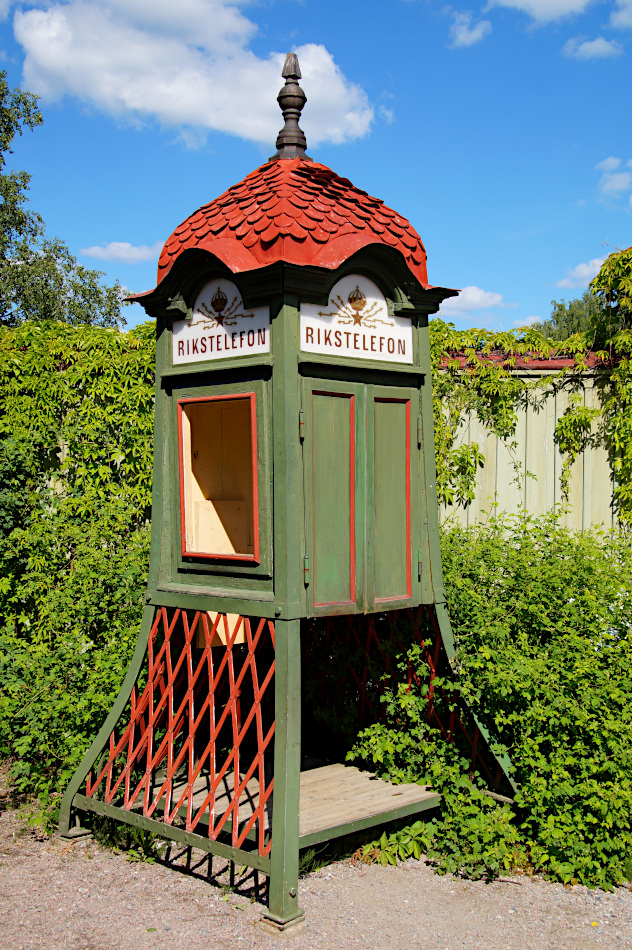 The telephone box dates from the beginning of the 1900s. 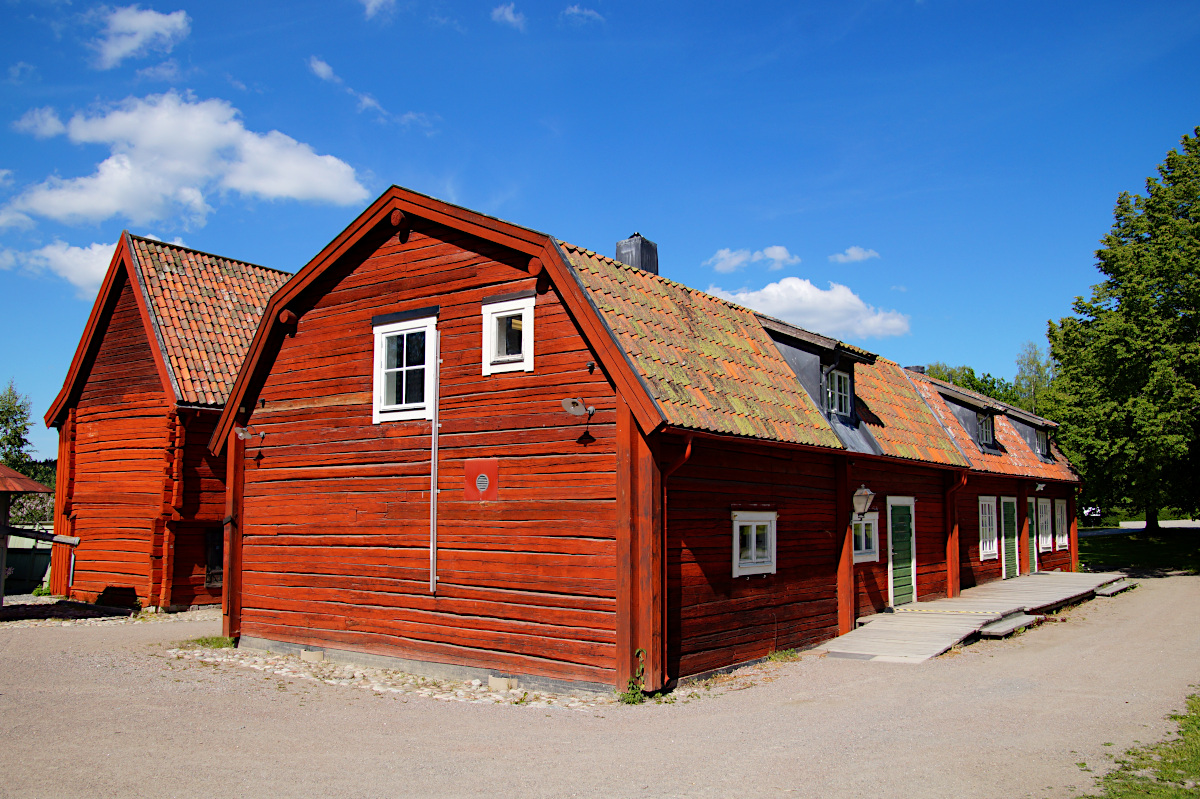 Also on this square (photo below) is the far more humble cottage called "Flinkstugan". Poor people often lived in cottages similar to this little red cottage on the Town Square. This unpretentious cottage, consisting of only 2 room, was built in the late 18th century in Västerås (Djäknegatan on Kyrkbacken), and was moved to Vallby Open Air Museum in 1924.

Like many of the houses you can see here in Vallby, this cottage was painted in the colour "Falu rödfärg" (Falun Red). The red pigment historically originated from the mines at Falun, in the province of Dalarna, Sweden. It was a side product of calcination of copper ore. Mixed with linseed oil and rye flour, it was found to form an excellent anti-weathering paint. And it was inexpensive! During the 17th century, falu red was commonly used on smaller wooden mansions, where it was intended to imitate buildings with brick facing. 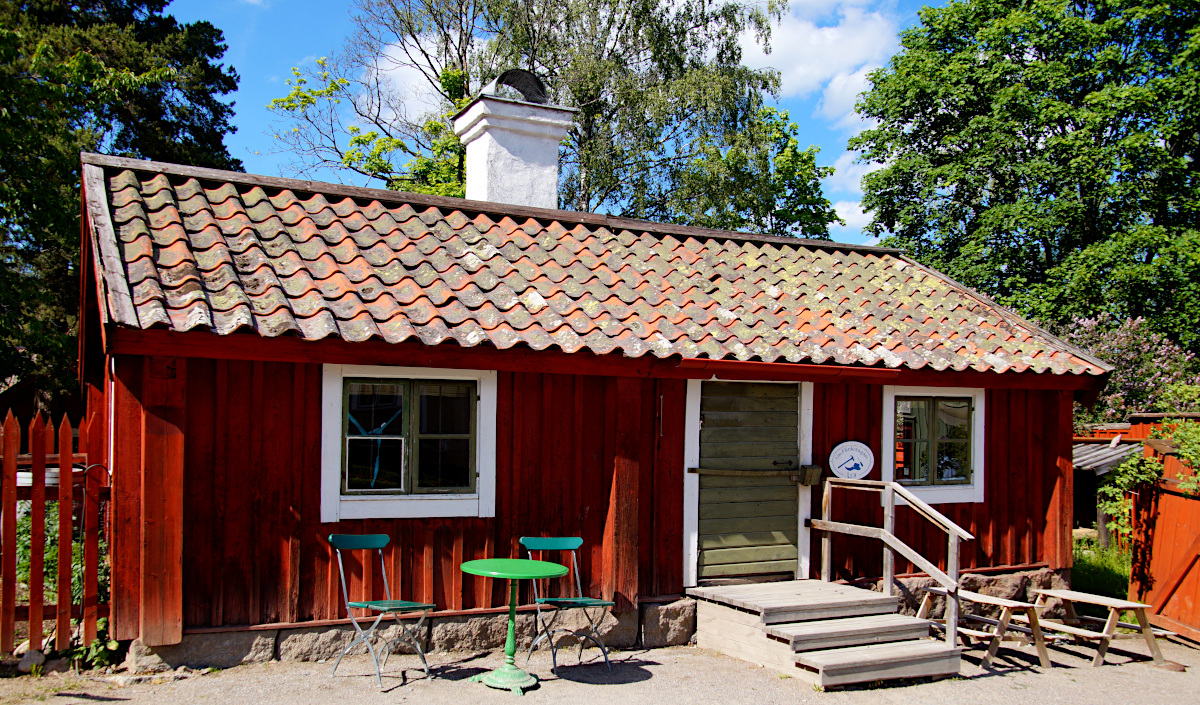 Flinkstugan from the 18th century 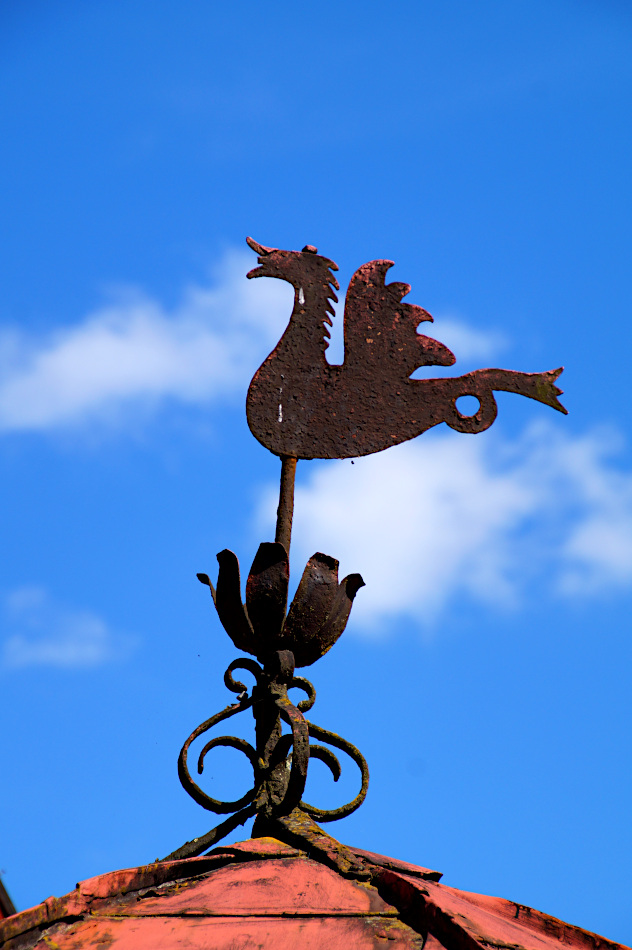 The Vallby Open Air Museum reflects life both in the city and in the countryside between the 17th and 20th centuries. As a visitor, you can experience how people lived and worked during those days, see animals they kept, plants and crops they cultivated in their gardens and field.

Normally during the summer months this place is full of life. You can meet maids, workers and farmers, a school teacher; all dressed in the clothes of those days. You can attend lessons in the village school, try old-fashioned games, help with the work in the workers' backyard and the farm, take a look inside the vicarage. But today it is quiet, very very quiet.....

We are in the midst of the Covid epidemic, and all activities are cancelled during 2020. But you can still visit, as we did today. And although we cannot see it in its full splendour, it still is a great place to visit! Around the houses there are lots of little details to observe, and objects placed, that help imagine how life was like in those days.

One of the details that I liked was this unusual weather vane in the shape of a dragon on top of the roof of the pump house. (photo right)

In the photo below you can actually see the pump house, a little octagonal building in a greenish colour. The pump house is also called the "Öjemarkska well" and is originally from Hamngatan in Västerås. In Västerås there were previously a number of city pumps from which the public could fetch water. Using city pumps was common in the city because there was no running water in the homes. The pump was also a place where people gathered to talk, gossip and discuss. 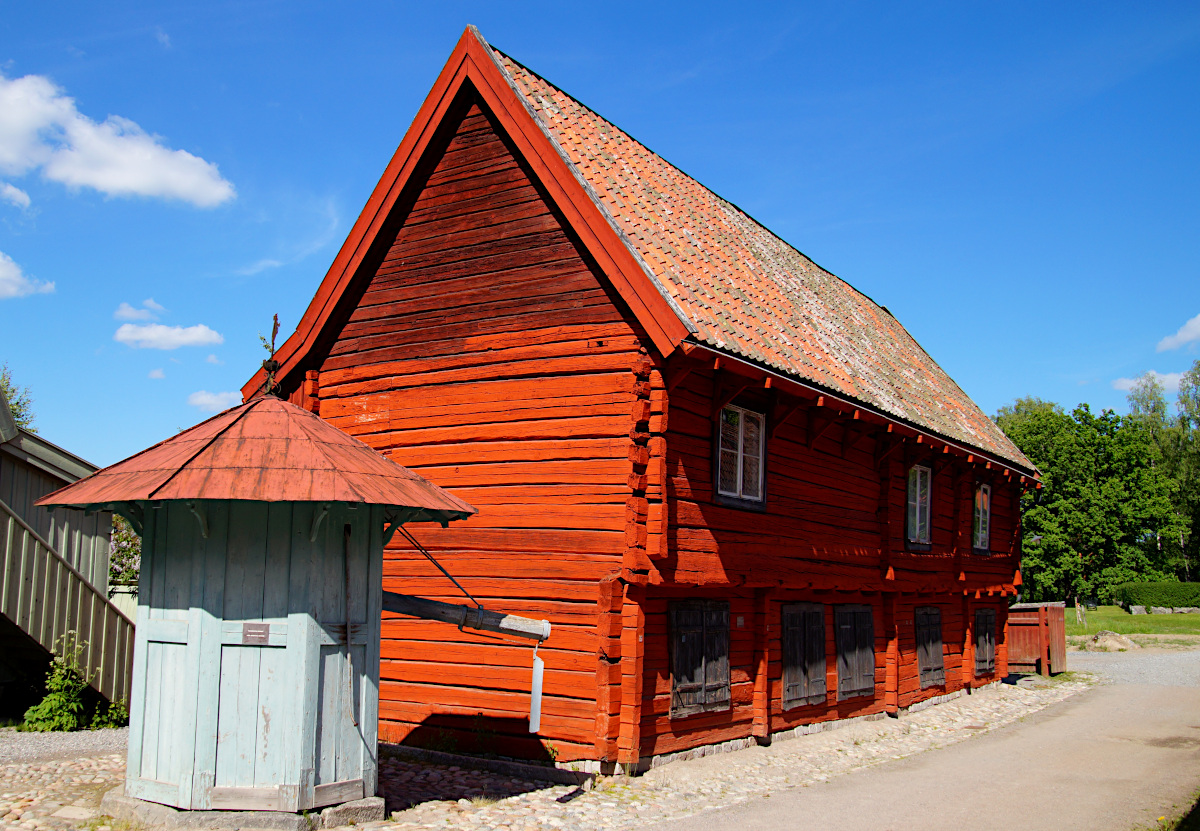 I really like this house beside the city pump (photo above), with its steep roof and the top level slightly overhanging the bottom level. This house dates back to the early 1700s, built in timber, and is divided into four rooms on the ground floor and three partitions upstairs. And do you see those shutters on the ground floor? These used to drop down and used as sales counters where goods were delivered to customers. Rather cool I think!

During its lifetime it was used for housing, workshops and of course as sales booths. It originally comes from the town of Arboga, a cute town about an hours drive from here. This type of street dwelling has a medieval origin and already had its place in the town plan of Arboga in the 13th century. The street stalls in Arboga were concentrated to the square and adjacent streets. 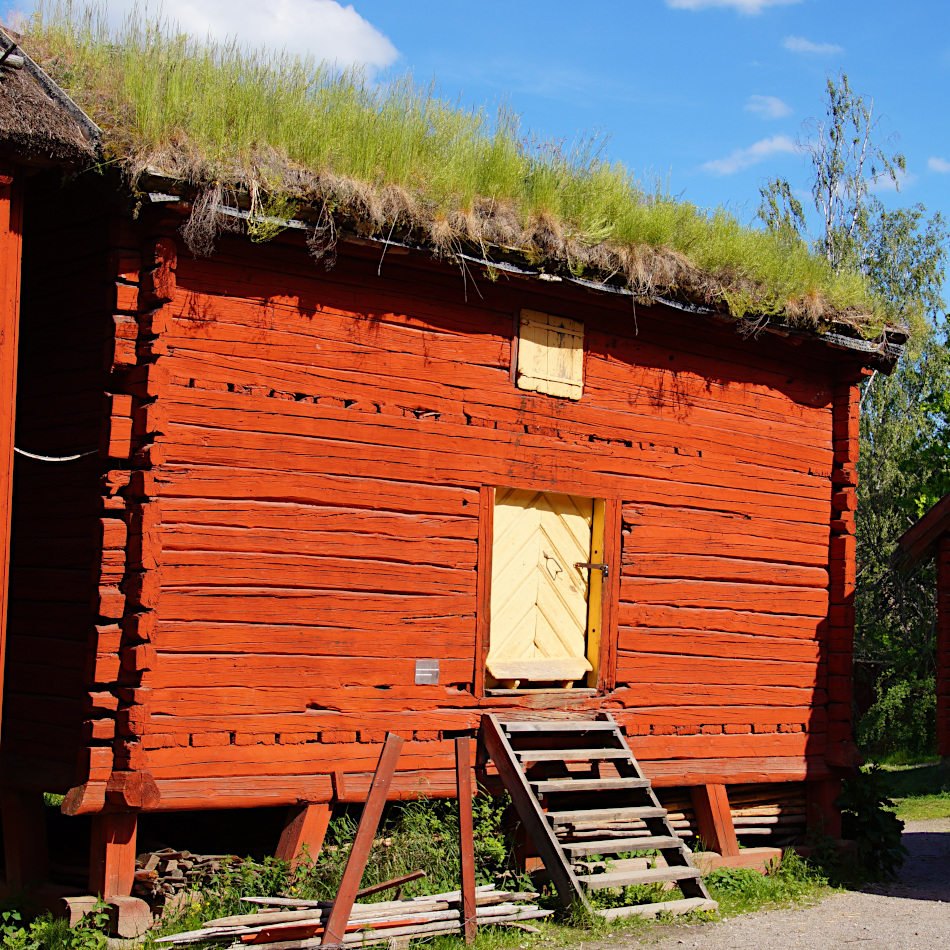 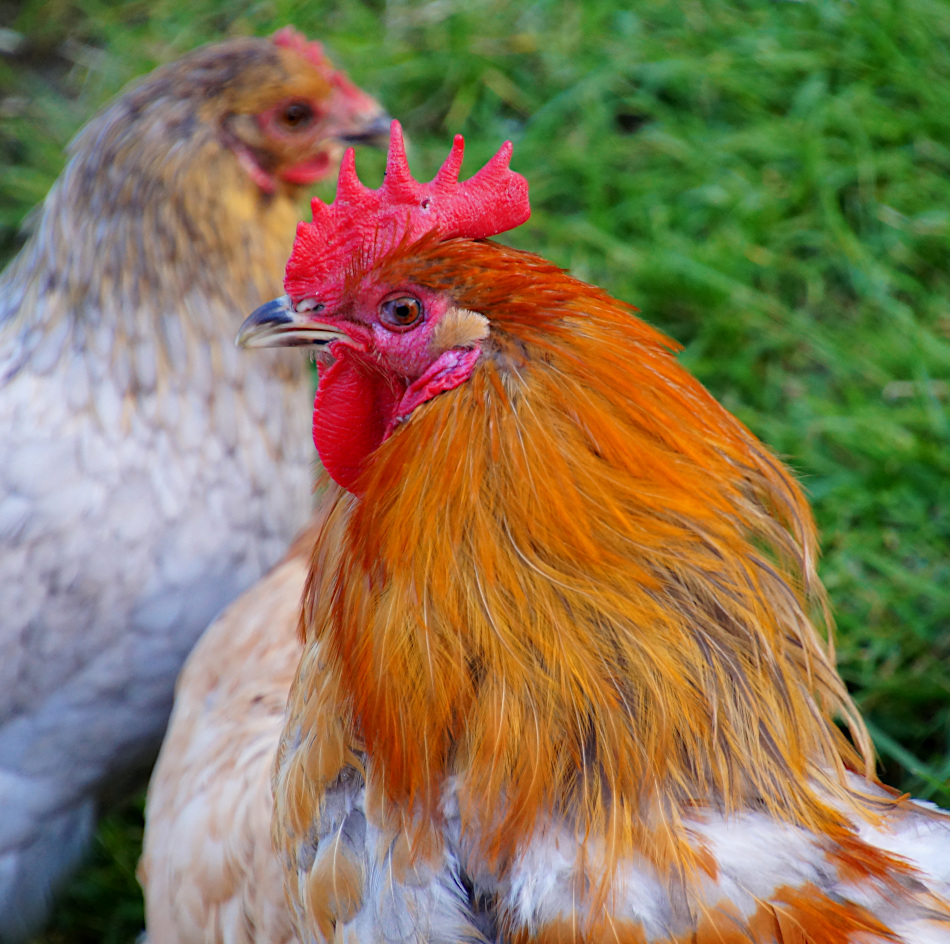 A rather nice surprise was a group of chickens blocking the road. Really beautiful specimens! But they didn't really want to stand still and pose for the camera :-) Besides the chickens you can find more animals, many of them old country breeds worth protecting. Examples includes the Swedish, blue and yellow duck, geese, rabbits, horses, sheep, goats and pigs. 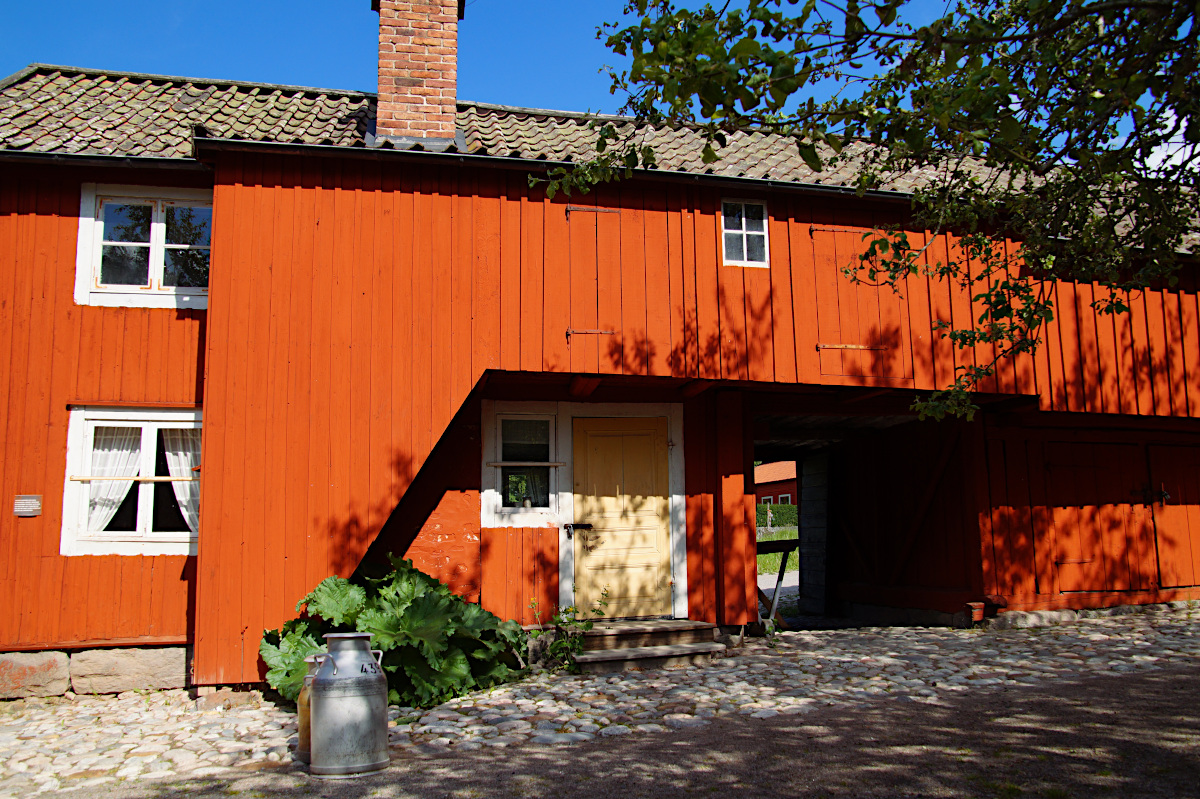 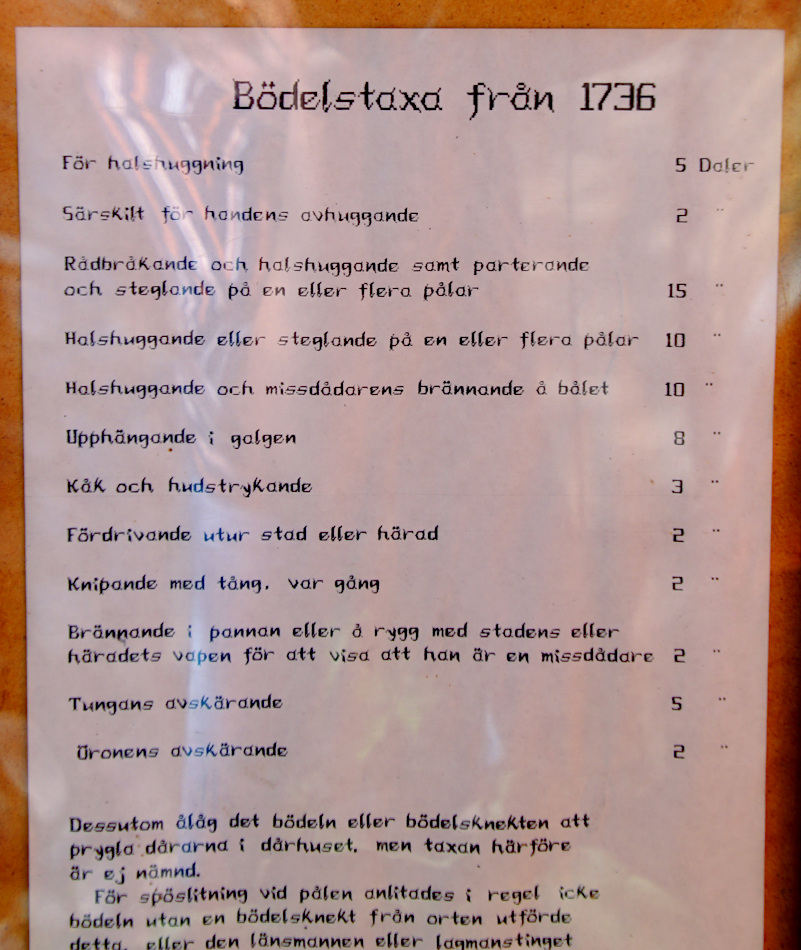 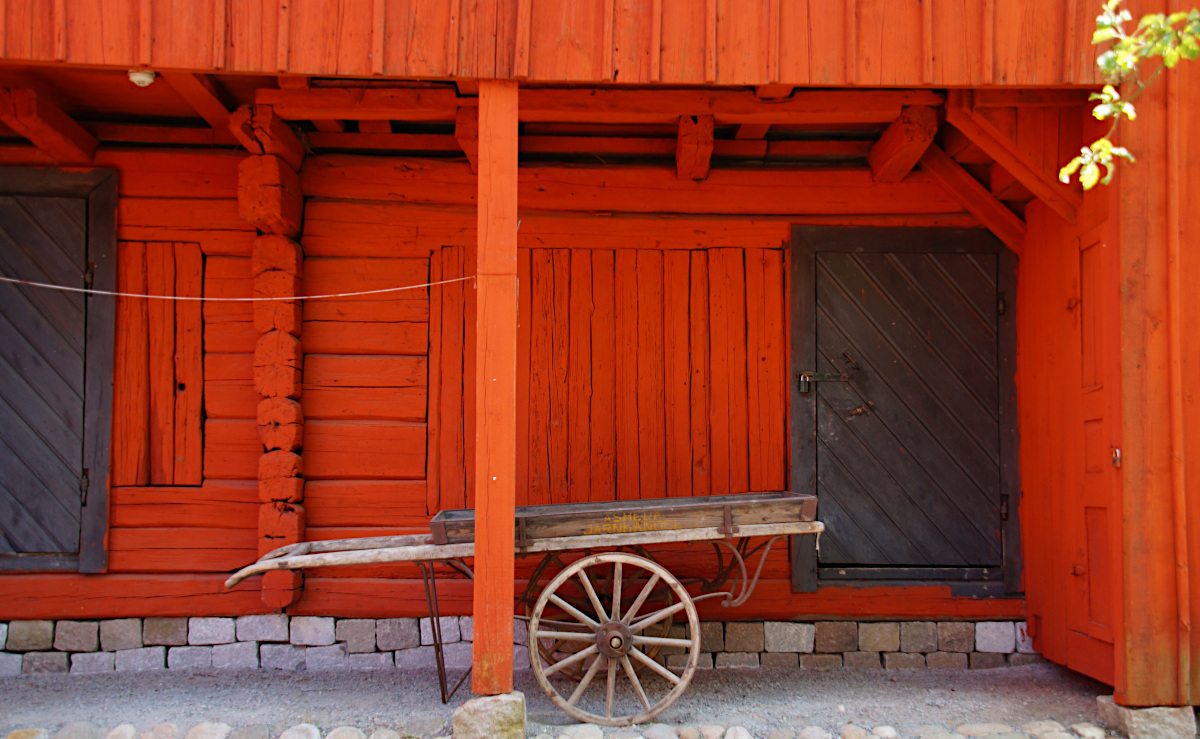 We slowly stroll further on this wonderful sunny day, and we arrive at the Workers´yard. We go through a gate in one of the houses and enter the courtyard. The houses surround this little yard, where a tree provides for some nice shade. There is a little garden-patch where rhubarb and potatoes could be grown.

But there is also a much darker side to this little courtyard. The building in the photo above is called "Skarprättargården" or Executioners Residence in English, because it was once the home of the county executioner. It was situated in Gamla Bryggerigatan (Old Brewery Street) in Västerås. On a little sign in this window you can see a list with the executioners fees from 1736 (photo top right). So how much does a decapitation cost? 5 Daler according to the pricelist. And the list continues with an overview of complex decapitations, each having an increase in price. The gallows costs 8 Daler, and a cutting of the tongue: 5 Daler. Shivers are running down my spine by the thought of all this cruelty and we decide to move to a more sunnier and happier part of Vallby. 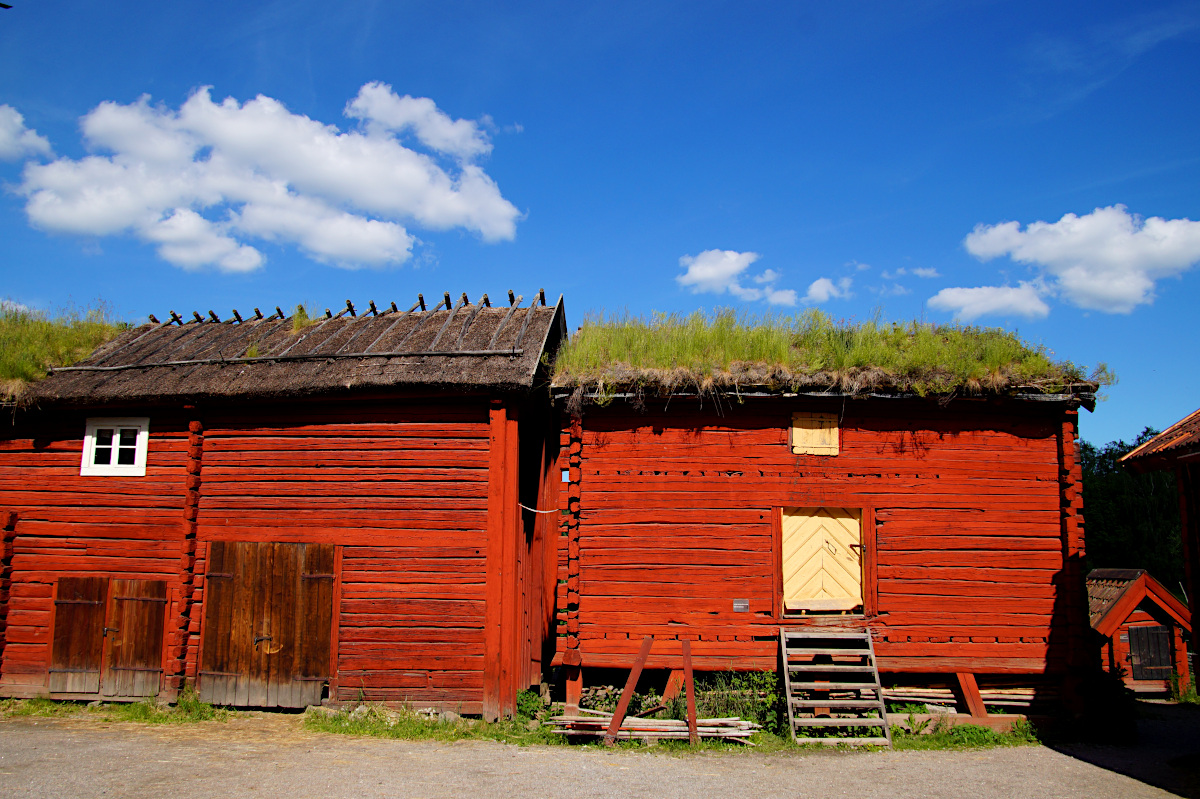 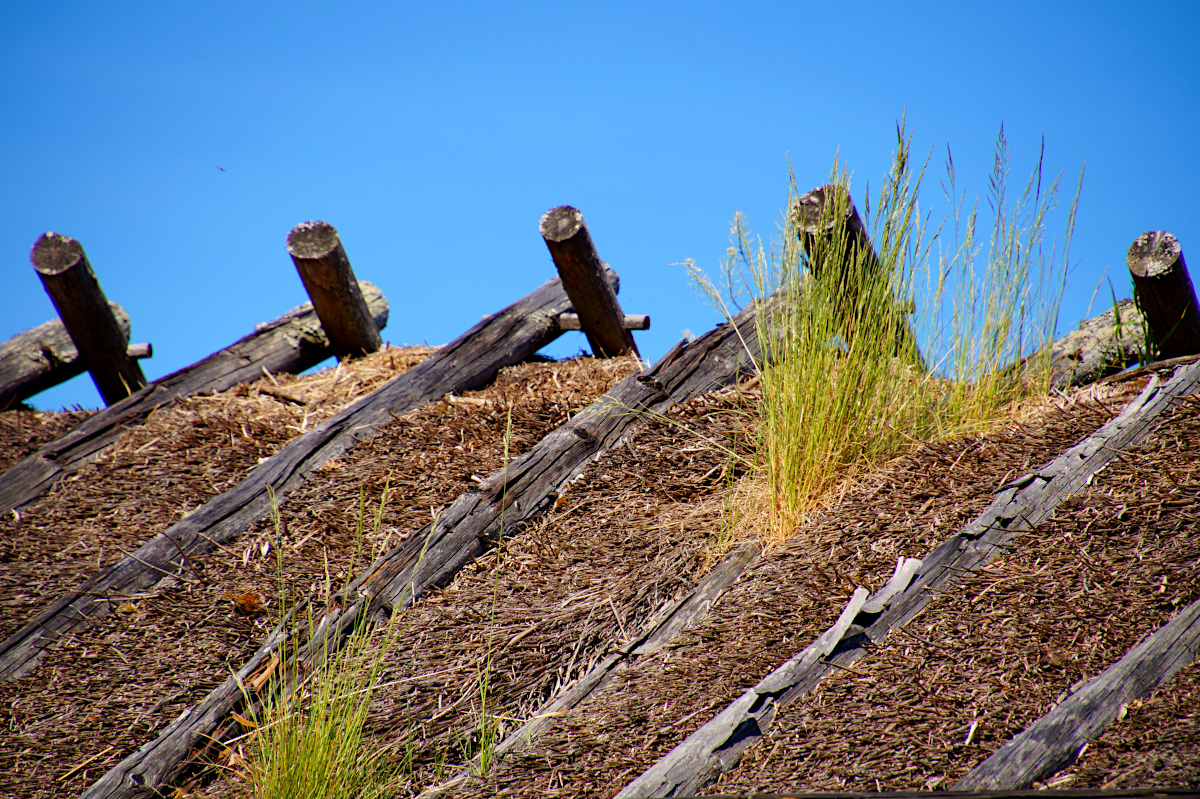 We get to the Farmstead area, one of my favourite parts of Vallby. I guess this is due to those grass-covered roofs that I absolutely love. And my attention was also grabbed by the interesting roof constructions of the building to the left (close-up in photo to the right). I find this so picturesque!

This farm, with associated buildings, is a typical Västmanland farm. The museum's farmhouse includes fourteen buildings, a kitchen garden, a hop-garden, cropland, pastureland, meadows and forest. On the farm lived a family consisting of the farmer and the farmer's wife, their children, maids, farmhands and the elderly former owners of the farmstead who were usually the farmers parents or his in-laws. Everyone had assigned tasks that varied according to the season of the year. The buildings on this farmstead come from various farmsteads in Munktorp, Ramnäs, Fläckebo, Västerfärnebo, Säby, Västervala, Skultuna and Tärna Parishes. 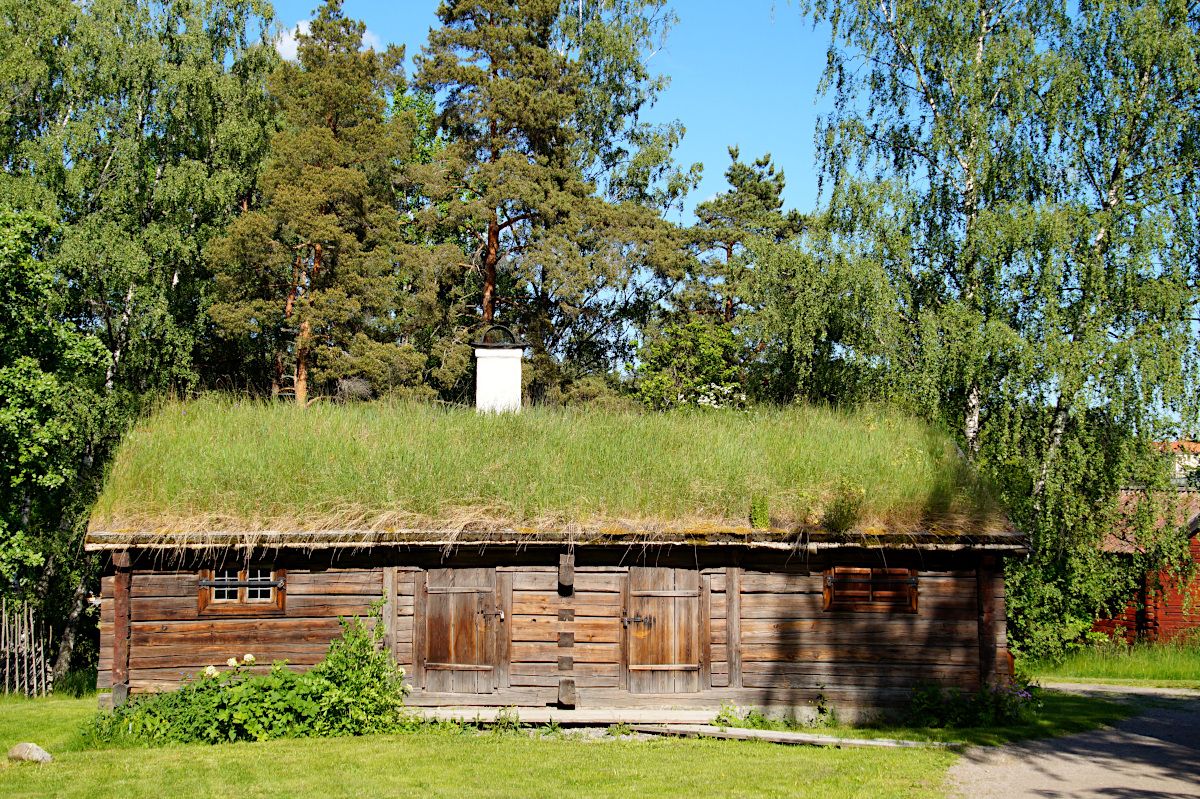 Time for our final stop on our walk: the Ironmaster's Homestead. The house was built as a one-storey house but in the early 18th century it was used up as an upper floor for a new manor house on the farm. When the house was moved to the museum, only the original building was included. The house is today once again a one-storey building. And it also has one of those grass-covered roofs that I like so much :-)

The house was probably built and painted on the inside for the couple Olof Larsson and Anna Persdotter. I read that the walls and ceiling are beautifully painted with leaf and floral patterns. And that is reason enough for me to go back to Vallby again, to see this for myself!

I really enjoyed my visit to the Vallby Open Air Museum, and I actually would have needed more time to see it all! So without a doubt, I will be back, probably somewhere in the summer of 2021. I really would love to see Vallby with all activities ongoing and having a chance to take a look inside some of these historical buildings.