I guess it is time that I write a bit more about 'my' area of Sweden: the area around Lake Mälaren! Mälaren is the third largest lake in Sweden and it also the area that I now call my home. I have been living here for approximately 15 years; to be exact, from the first day that I moved to Sweden. And this page is going to be about the quiet little town of Strängnäs, about a 30 minutes drive from my home. Or 85 km west of Stockholm, approx. a 1 hours trip by car or train.

The Cathedral in Strängnäs 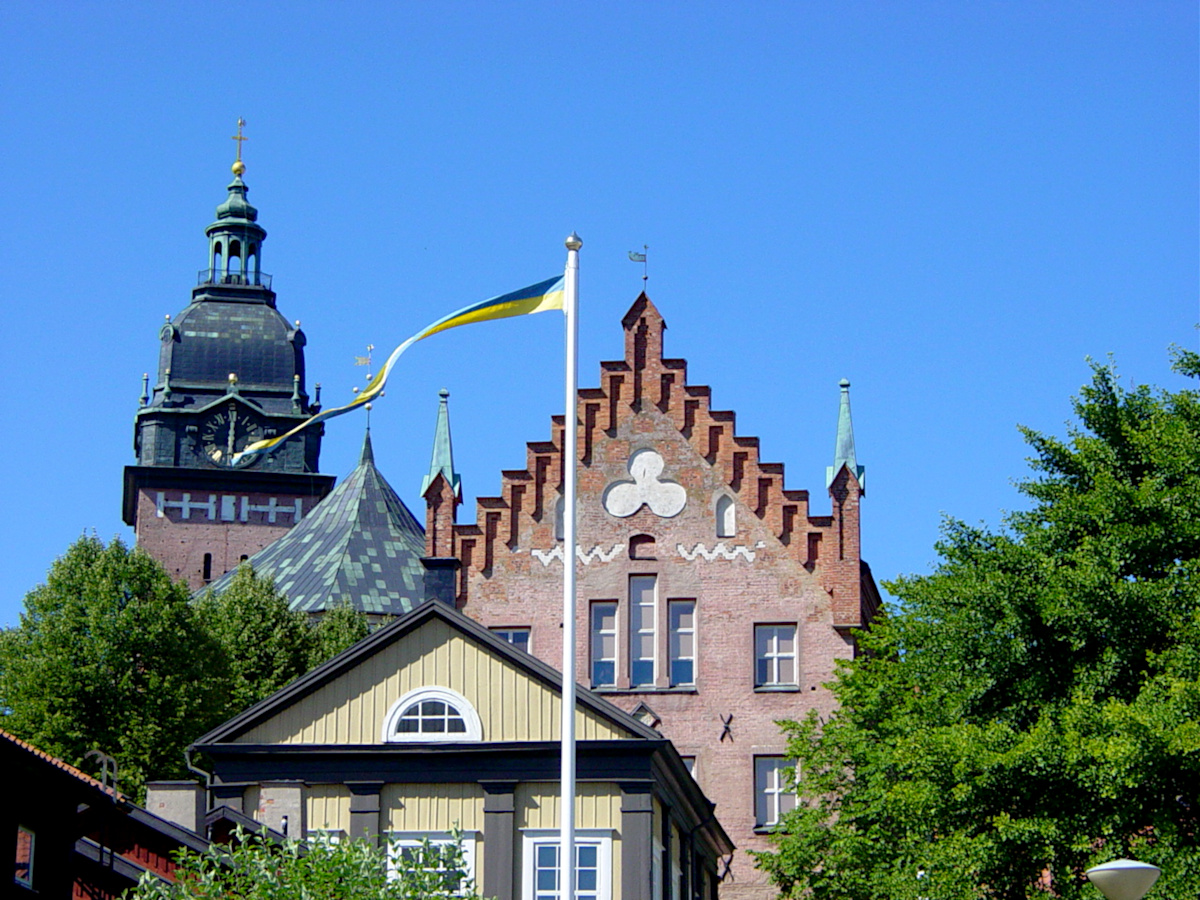 Strängnäs is a quiet little town in the beautiful lake area of the Mälaren, west of Stockholm. It's not really a tourist destination, but some parts of the city are nice to visit. The history of Strängnäs dates back to the Viking era. Strängnäs is actually one of Sweden's oldest towns and has played an important role as a church administrative centre in the middle Ages.

Unfortunately large parts of Strängnäs were destroyed by fire in 1871, but luckily some areas were spared and thos These are the parts of the town that are worth looking at: one area is around the old windmill, and the other is the cathedral, where you still can find some of the old houses.

There is also a little harbour in Strängnäs that gives the city a nice atmosphere. I hardly ever have my camera with me when I am in Strängnäs, so unfortunately I don't have many photos of the town itself. But with the exception of several sightseeing visits to the Cathedral, which this page will be about. 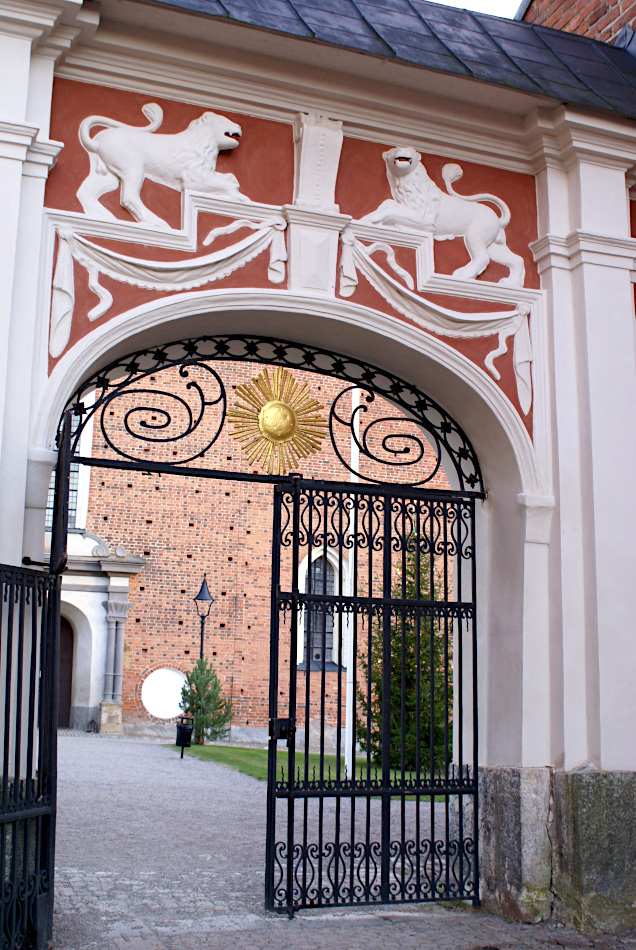 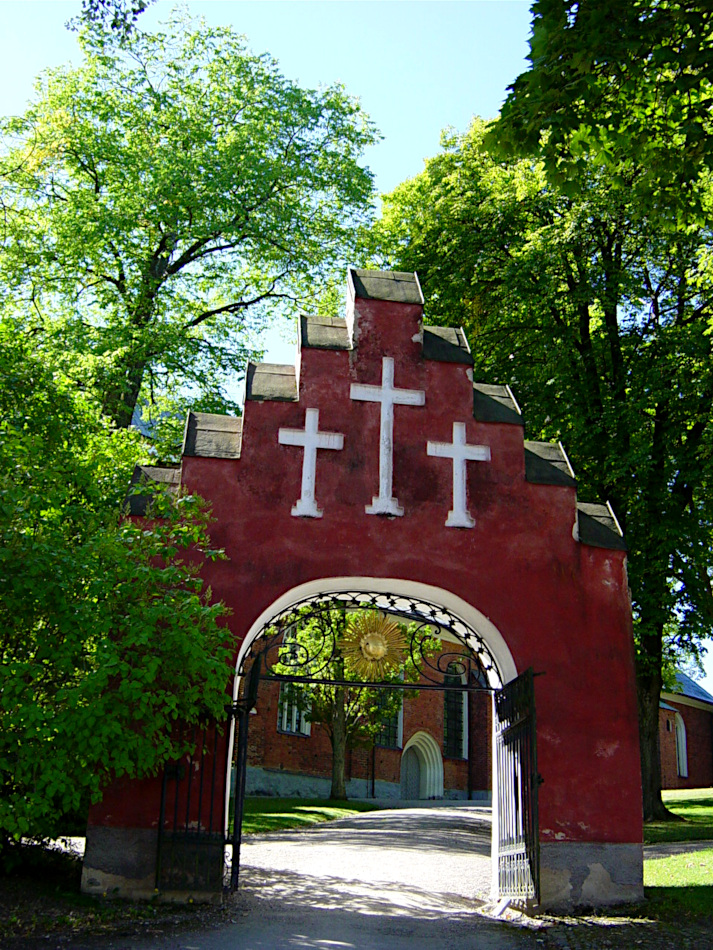 The cemetery with the Cathedral was surrounded by a high and powerful wall from the Middle Ages until the 1870s. The north and west cemetery portico are remnants of this wall. It was in connection with the demolition of the wall that the church site was expanded to the north and east and transformed into today's cathedral park.

Two gates that have previously been connected to the medieval wall are preserved, one in the west and one in the north. The western gate is called the lion gate, as it is decorated with lions in high relief above the arch of the west facade. The other one is the north gate, or also called "korsporten" (the cross gate). The top of the gate is in a staircase gable. Both of these have forged gates with a fixed upper part and is designed with a gilded sun. 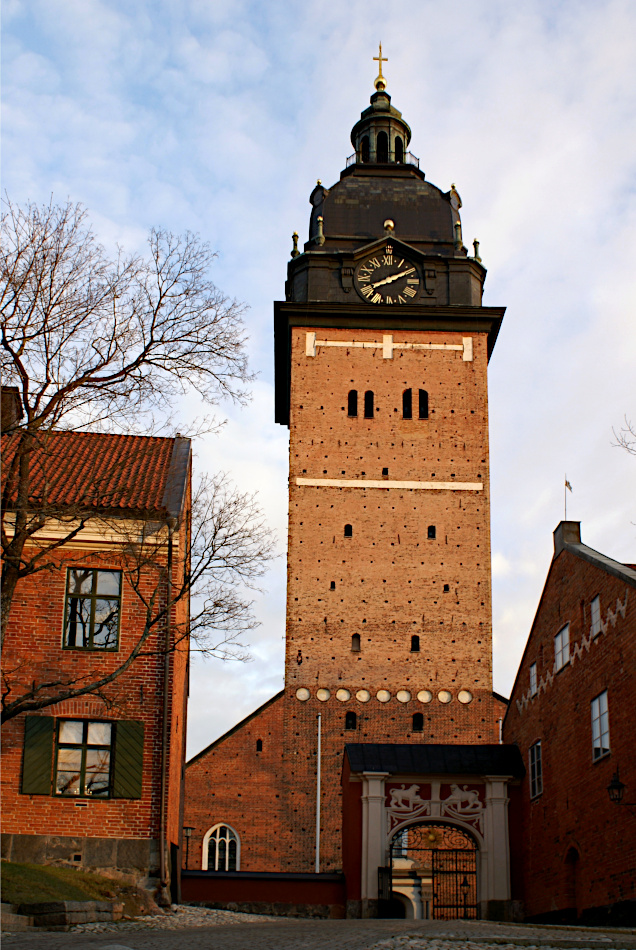 Do you see anything peculiar on the clocktower?

Take a good look at the clock! The clock, which is not present on all sides of the tower, has only one clock-hand! In contrast to the modern days, at that time the minutes were not that important, one was more interested in the hour. And hence, only one clock-hand was needed.

And do you know why so many pigeons call the tower their home?

If you look really really closely at the photo you can see a lot of dark squares. These are holes in the tower wall to support the scaffolding when the tower was build. As the tower was build in several rounds, it was easier to leave these support holes in place. Which nowadays is highly appreciated by the local pigeon population :-) 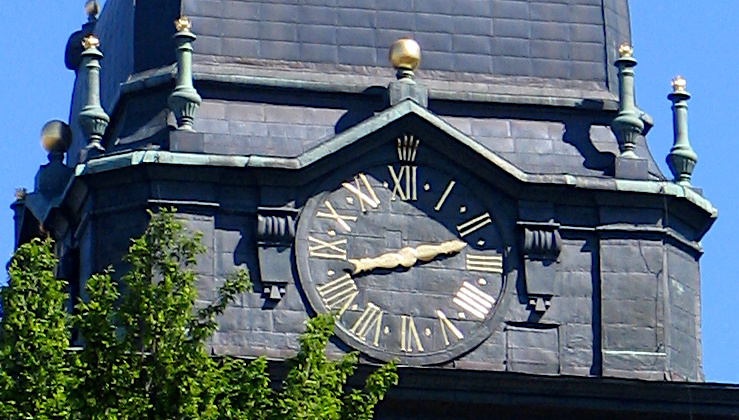 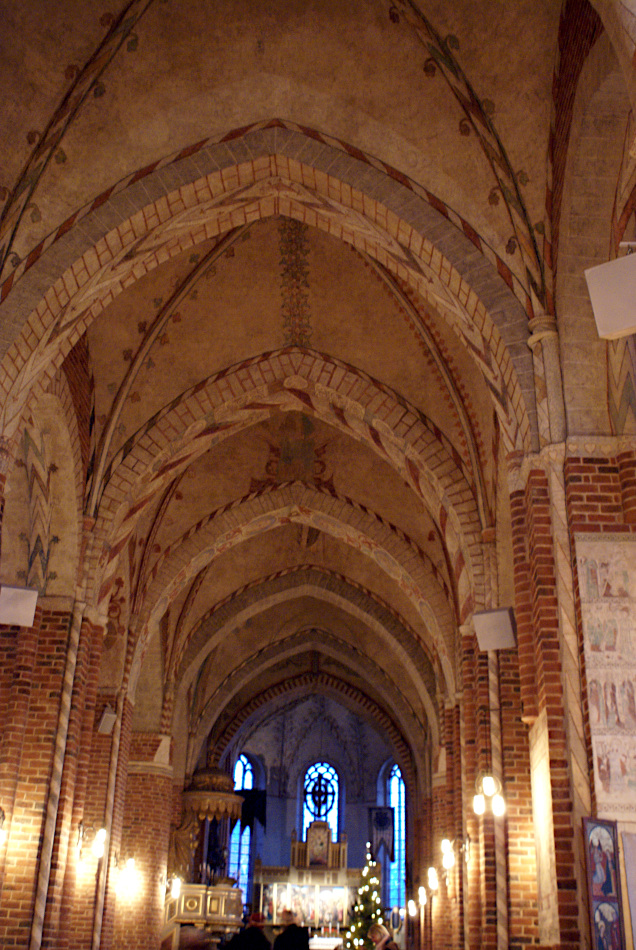 The Strängnäs Cathedral is one of the most beautiful and best preserved of the thirteen cathedrals in Sweden. The cathedral was built in 1280 on a beautiful spot, on a hill, towering over the city of Strängnäs. Strängnäs got its city rights in the same year, which makes it one of Sweden's oldest towns. In the Middle Ages Strängnäs was among the country's most important towns and the Bishop was the King's representative.

The cathedral has a lot of Swedish history; and several Swedish kings are buried here. One nice fact, that not even all Swedes know, is that on June 6th 1523 Gustav Vasa was elected king of Sweden at Strängnäs Cathedral. This day has still a special meaning because today this day is celebrated as Sweden's National Day. 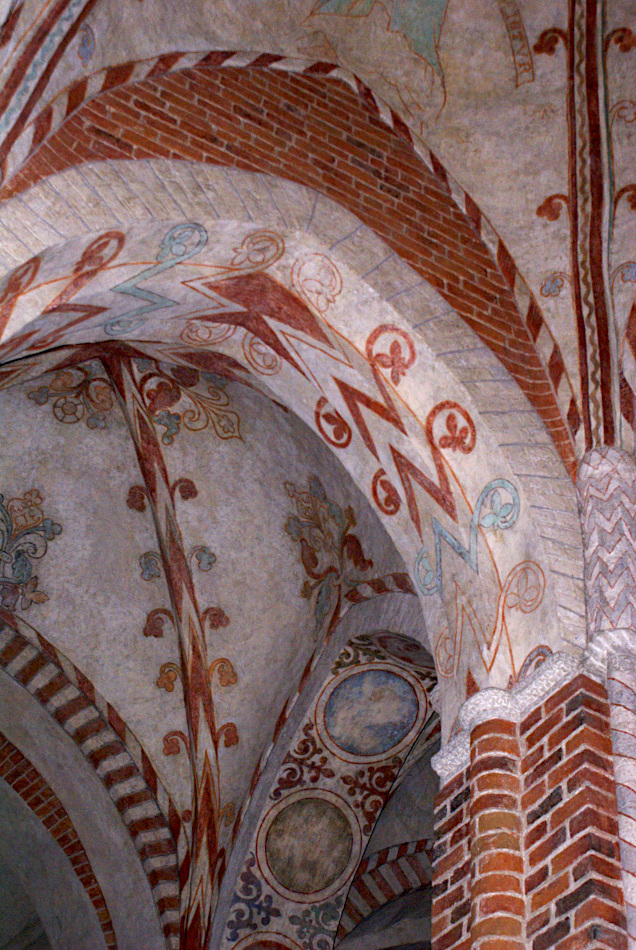 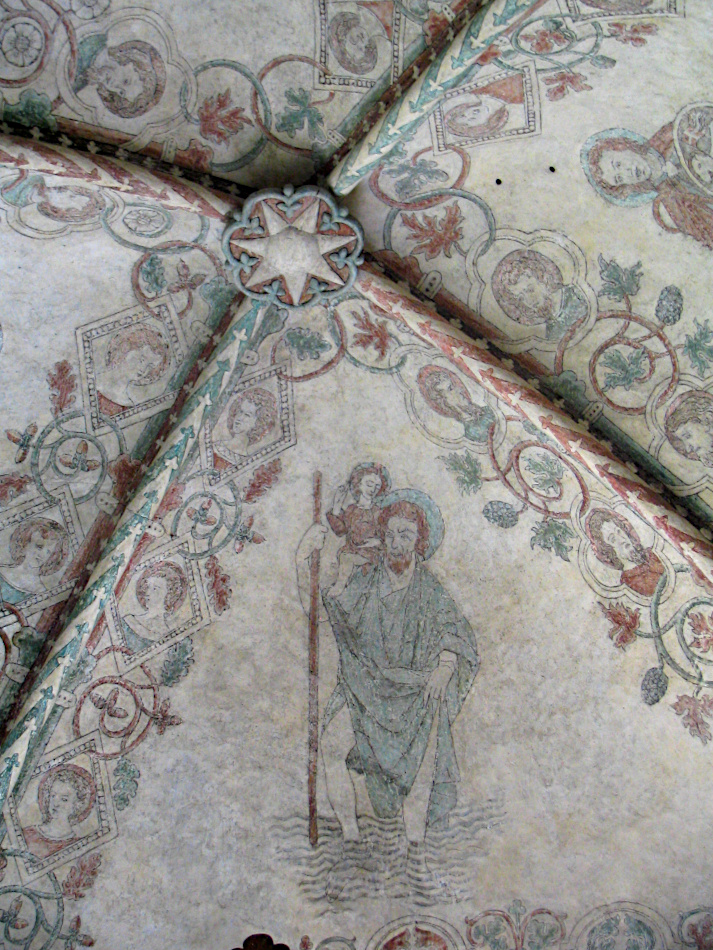 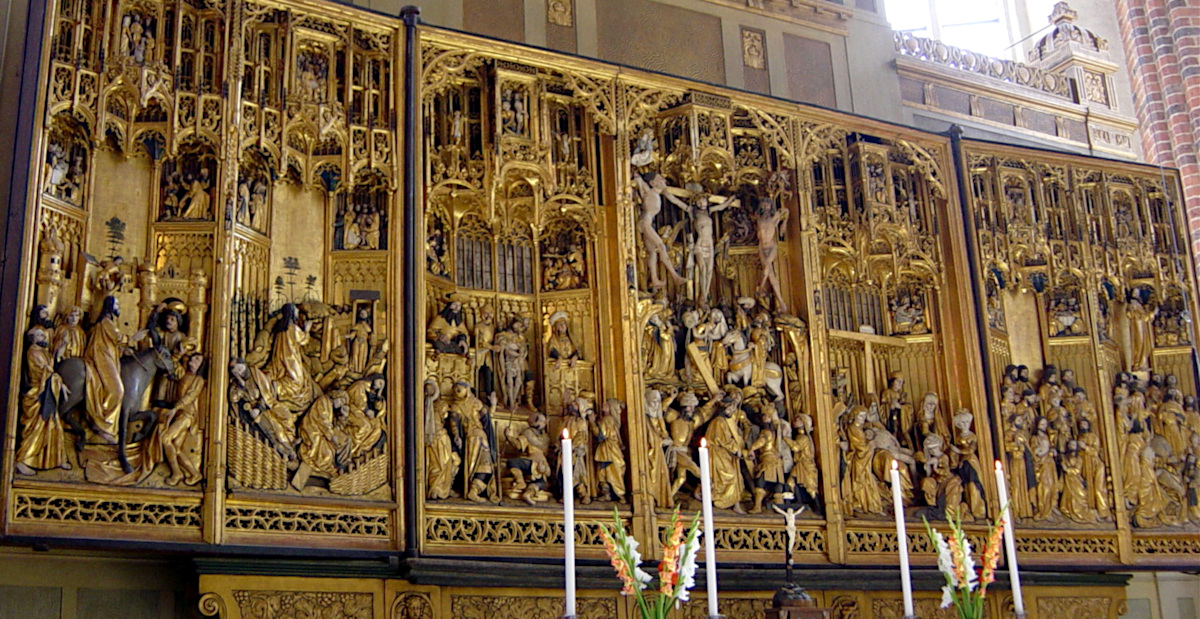 Let's take a closer look at the inside of the cathedral. One of the most impressive and beautiful things in the cathedral is the high altar cabinet (reredo), that dates back to the 1490's. It was a made in Brussels and given to the Cathedral by Bishop Kort Rogge. It is one of Europe's biggest 'reredos'. The altar is made as a cabinet with panels / doors that can be closed. When it is opened you can see the "The story of the Passion" in seven large and several small scenes.

As the doors in the cabinet are very old, and with that very vulnerable, the doors of the cabinet are only open / closed 5 times a year, showing different scenes each time. So it totally depends on the time of the year you visit, which scenes in the high altar you will see.

The photo above and below are from the same high altar from 1490, but taken during different times of the year. During Easter the reredo had the doors open (photo above) and show the story of Jesus' suffering and crucifixion. The photo below was taken around Christmas time, when the doors are closed, and the paintings show the story of the birth and life of Jesus. 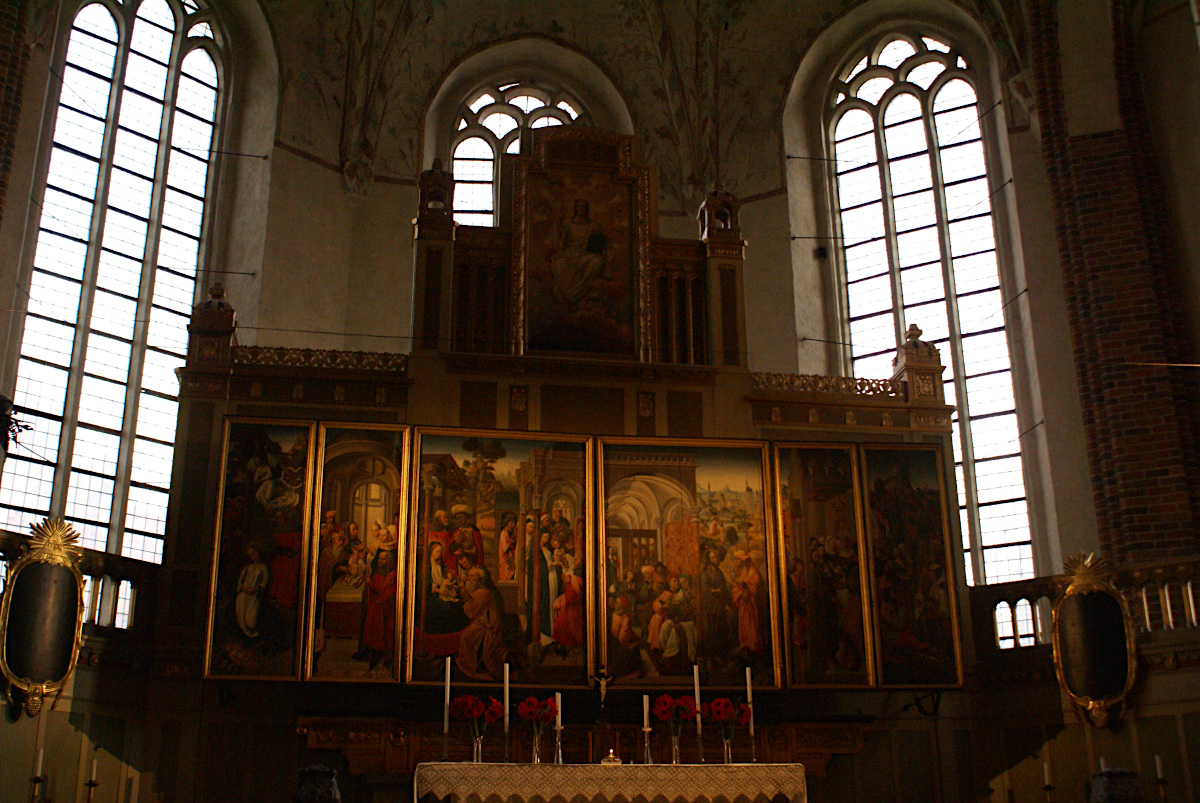 The high altar from 1490, photo taken during Christmas time

Very close to the high altar (photos above) on the right side of the church you can see this altar. Like the high altar this one also dates back to the 1490's, was a made in Brussels and was given to the Cathedral by Bishop Kort Rogge. The picture you see is a small detail of the reredos. Both of these altars are great to see, with so many details! the small grand doors at the top show Christ and Mary as intercessors for the people before God the Father as World Judge. The back of the lower wing doors has famous paintings by the four Latin church fathers: Ambrose, Augustine, Hieronymus and Gregory I. 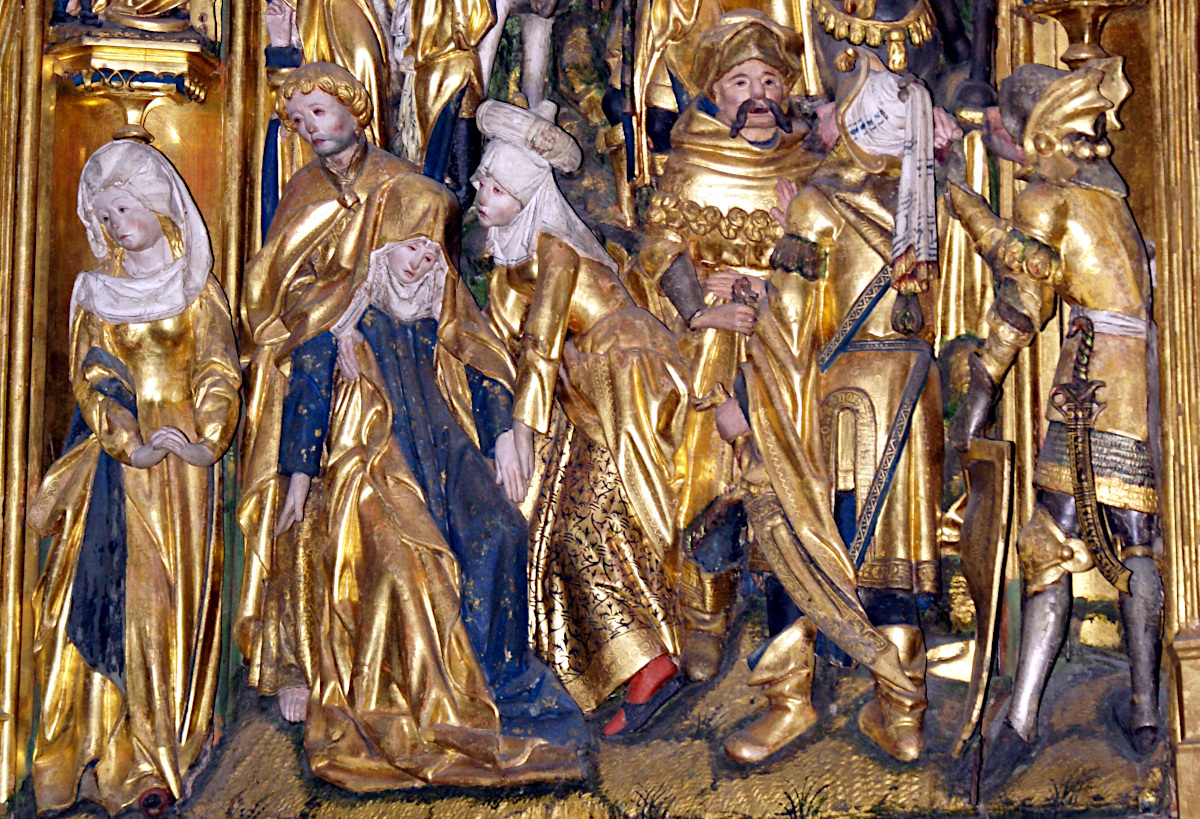 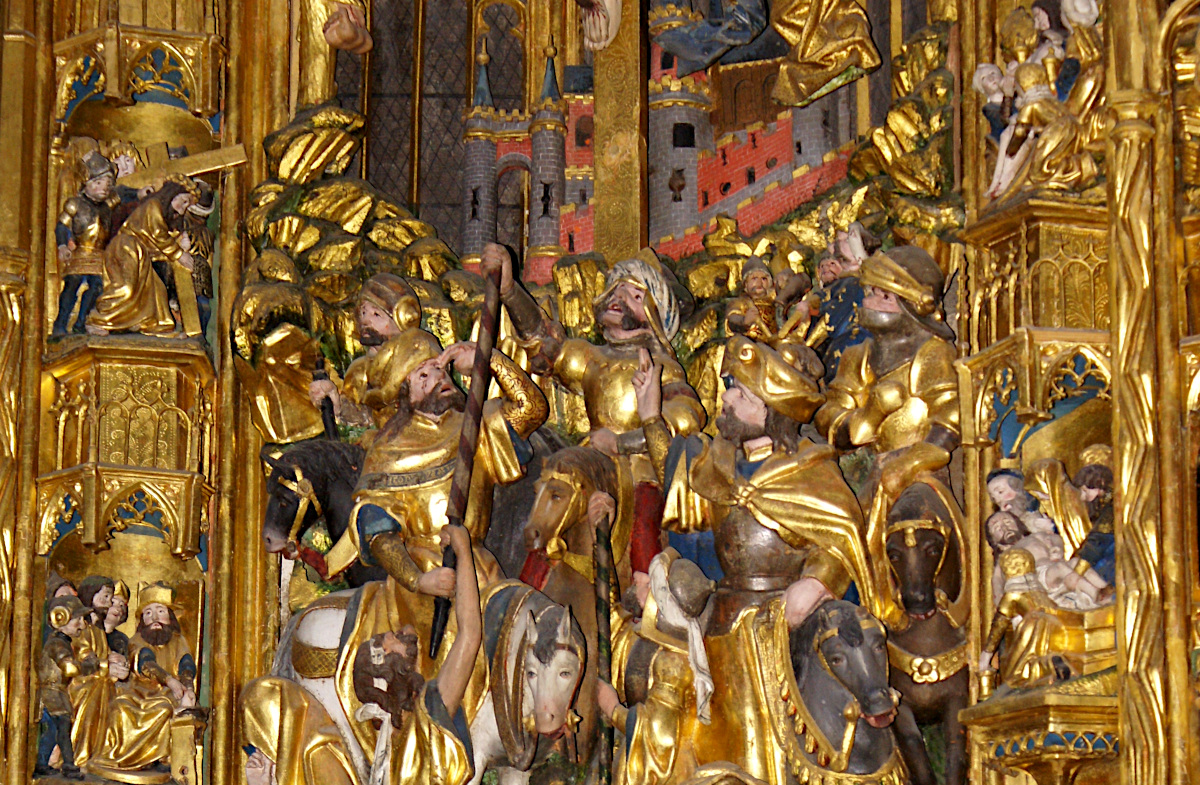 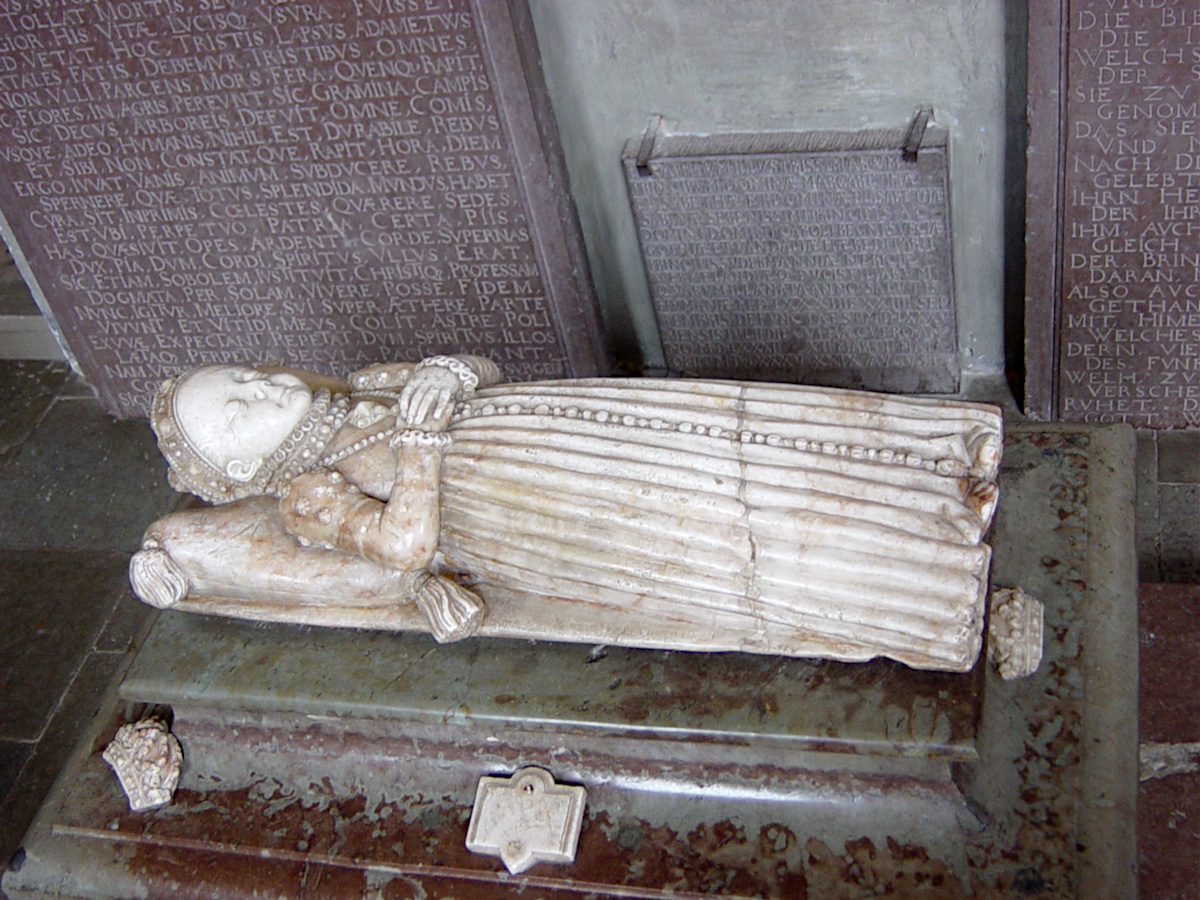 This is the monument to Princess Isabella in the Cathedral of Strängnäs. The monument is beautiful and very touching when you realize that Princess was only two years old when she died in 1566. Isabella was the daughter of King Johan III and died in Gripsholm Castle, which is not that far from here.

The little girl is depicted in full figure wearing royal jewelery and a stiff brocade dress. The sarcophagus was made in 1580 by the Dutch stonecutter and architect Willem Boy. The sarcophagus itself is made from limestone from the island of Öland. The full figure is sculptured out of alabaster, with Princess Isabelles head resting on a pillow covered with tassels. She is dressed, according to the custom of the time, in an adult lady's costume. The Latin text of the reverse reads in translation: "The royal child Isabella, once her parents' hope, lies in this little tomb, covered with marble. On earth, she was short-lived, so that she would stay in heaven before God the longer." 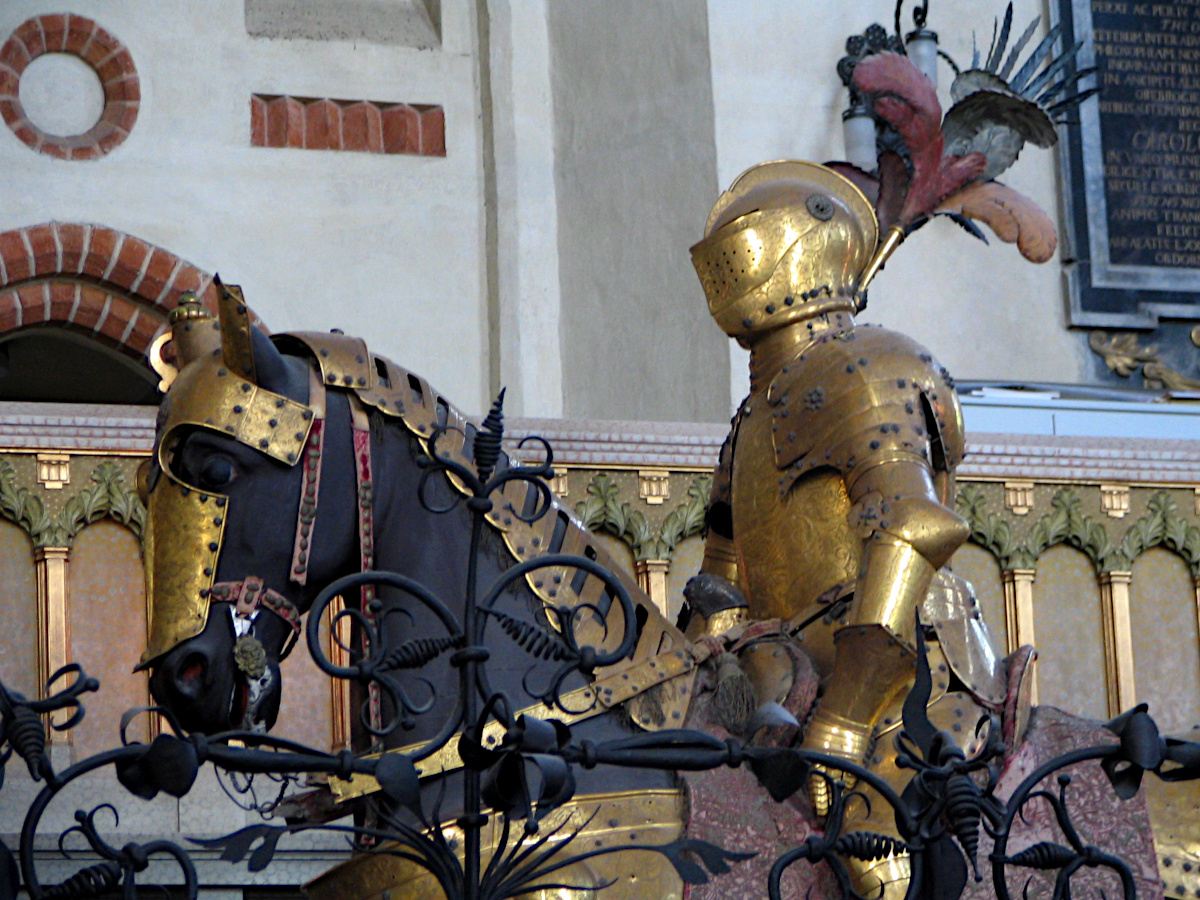 Carl IX's tomb monument, a wooden horse carrying a gilded copper armor, made to the King's burial in 1612. 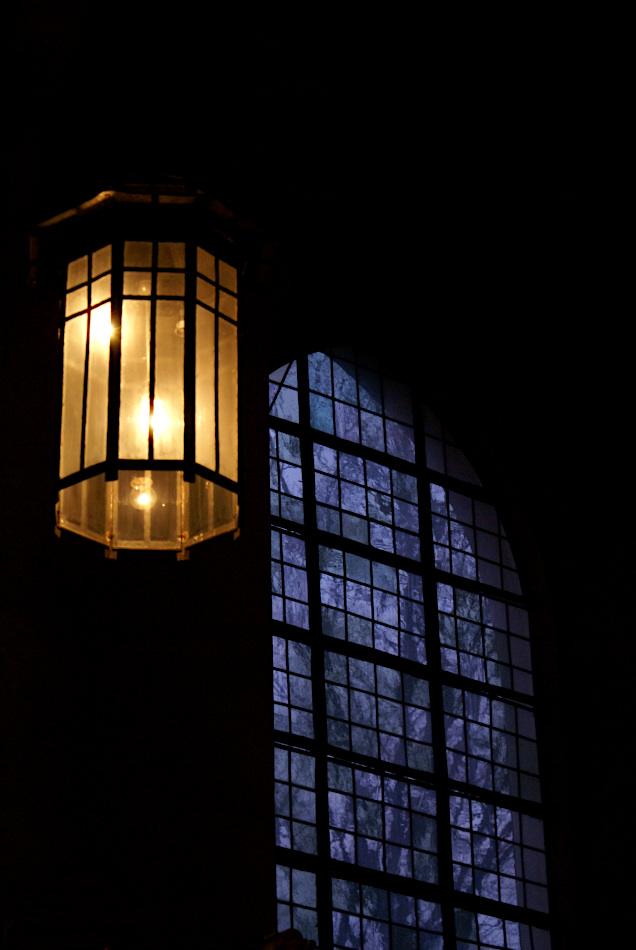 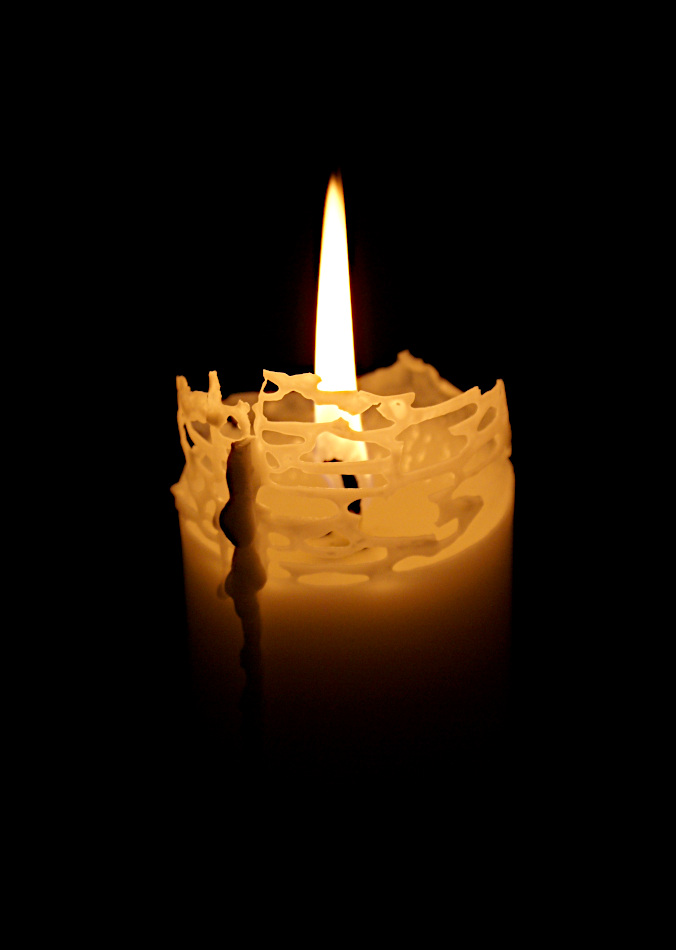 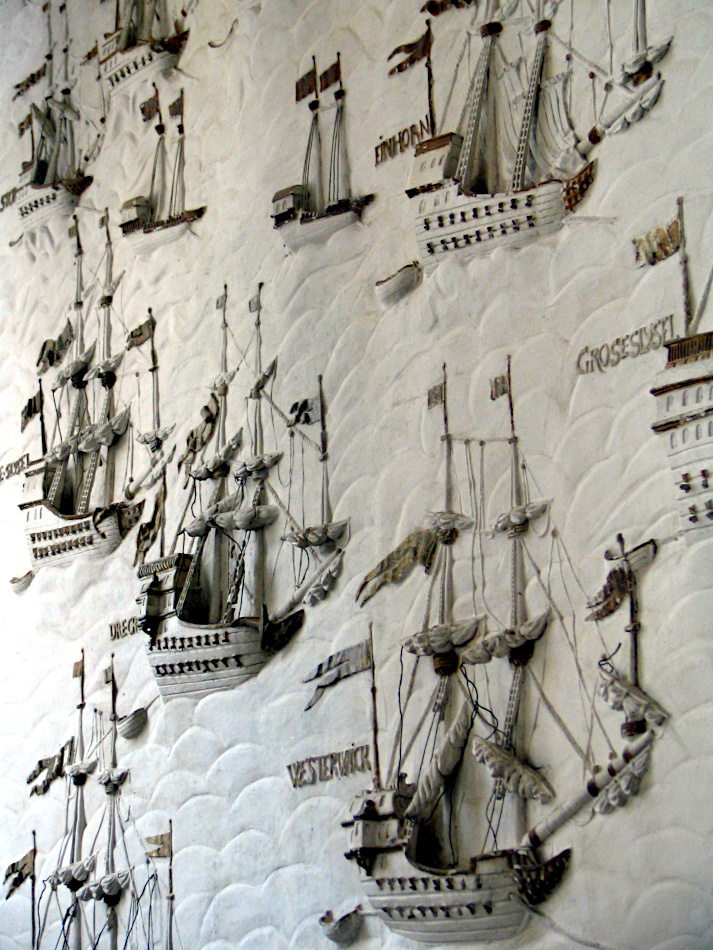 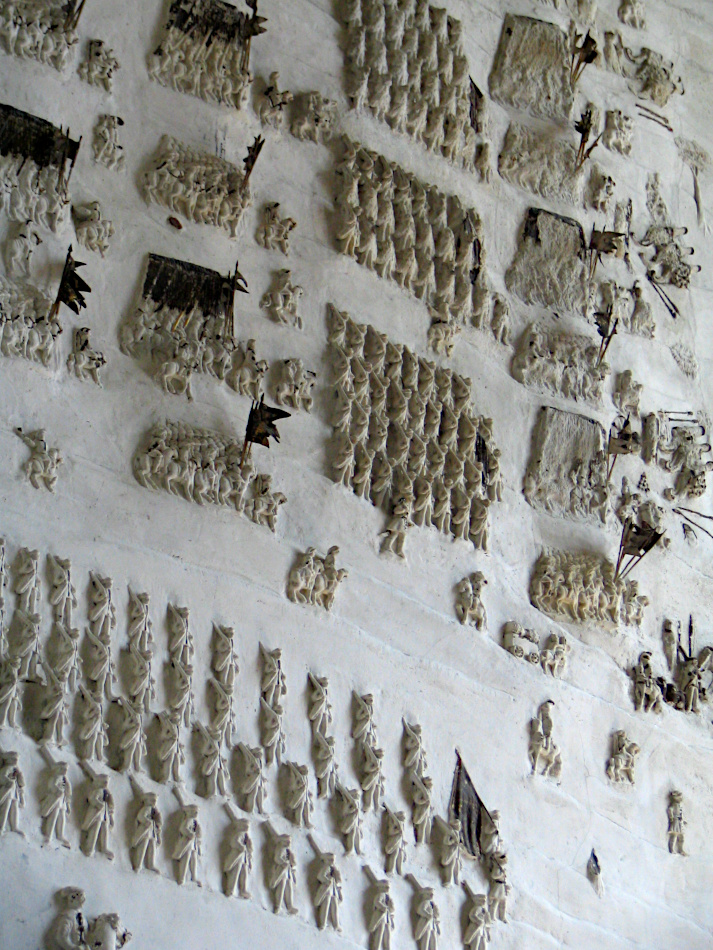 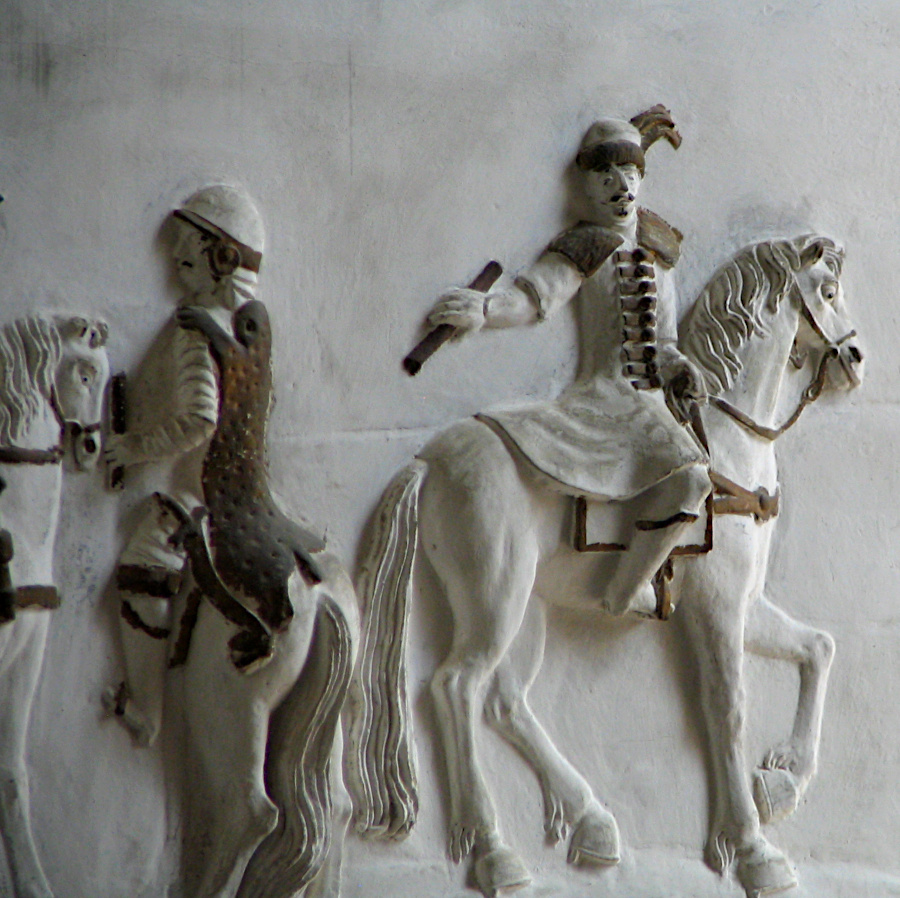 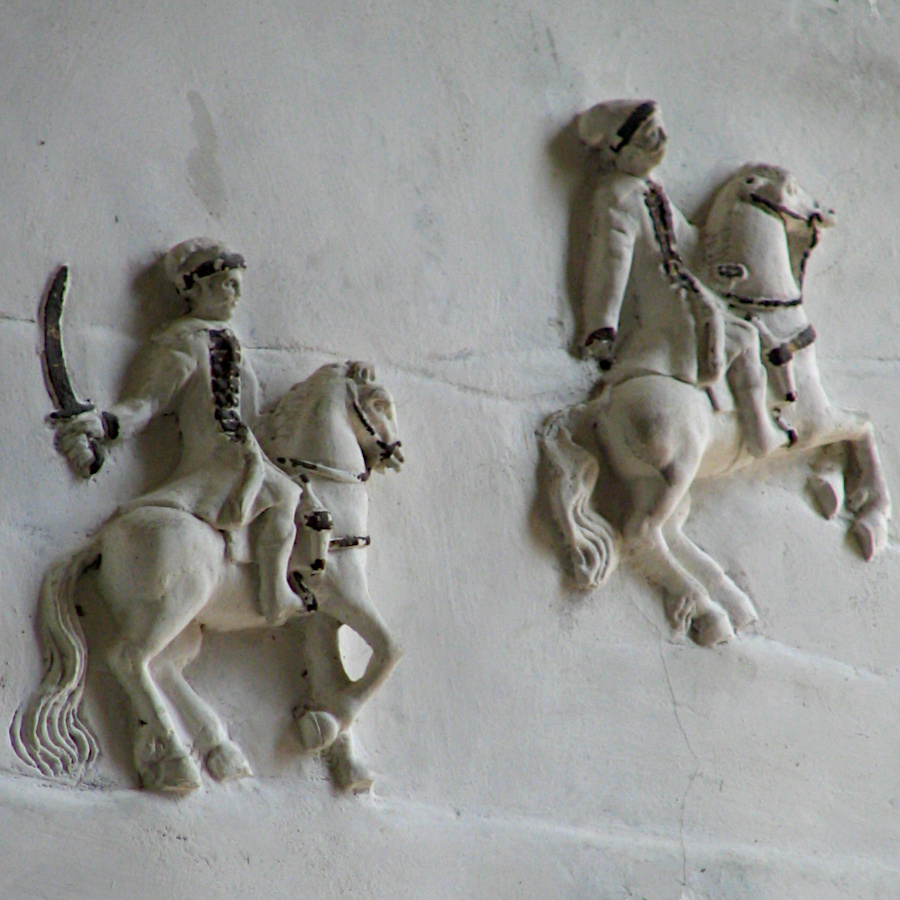 If you are at the cathedral, don't forget to take a look at the chapel of Carl Carlsson Gyllenhjelm. The stucco decor of the ceiling and walls is remarkable! They are from 1649-1652 by Daniel Anckerman. Gyllenhjelm, who died in 1650, was the son of Carl IX's. The tomb monument is made 1629-33. In the photos above you will get some impression of the remarkable stucco, but this is only a tiny section of the walls and ceilings. It is fascinating to look at all the details incorporated in the stucco. 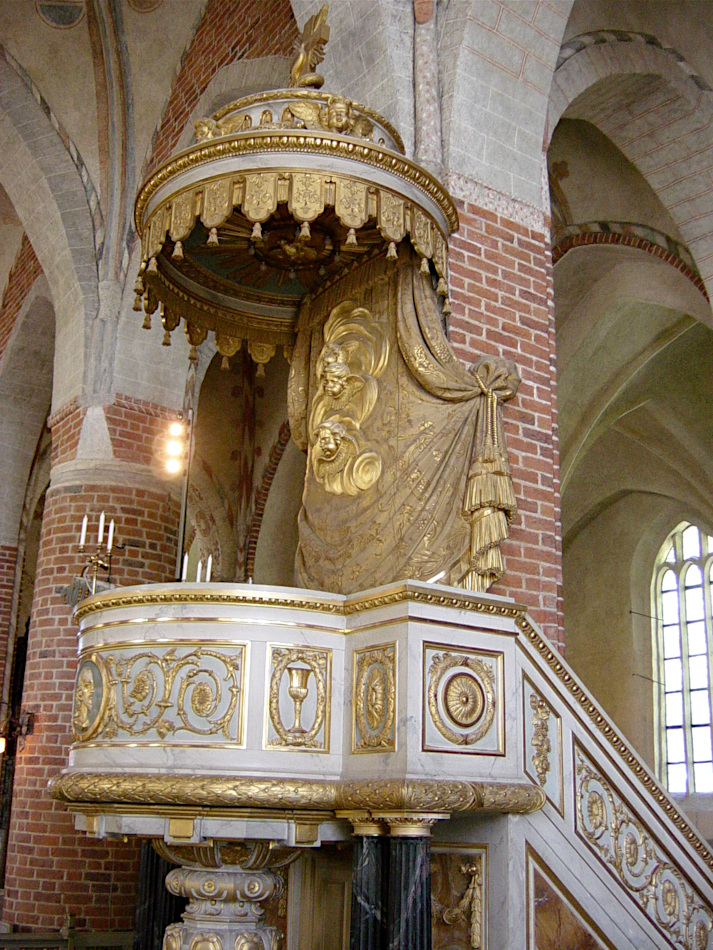 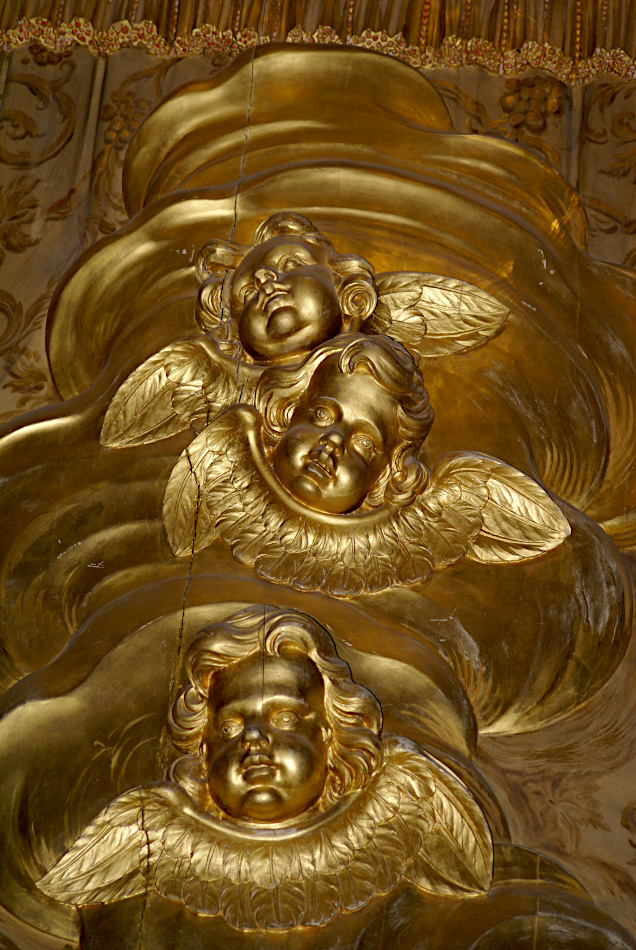 The pulpit dates back to 1789 and is in Gustavian style and was made by the royal sculpturer P. Ljung. 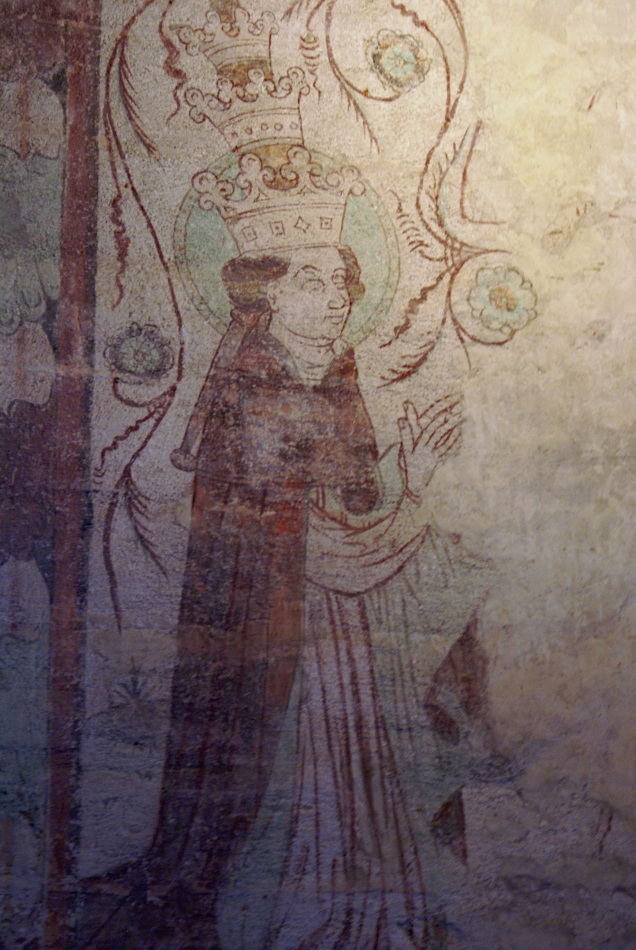 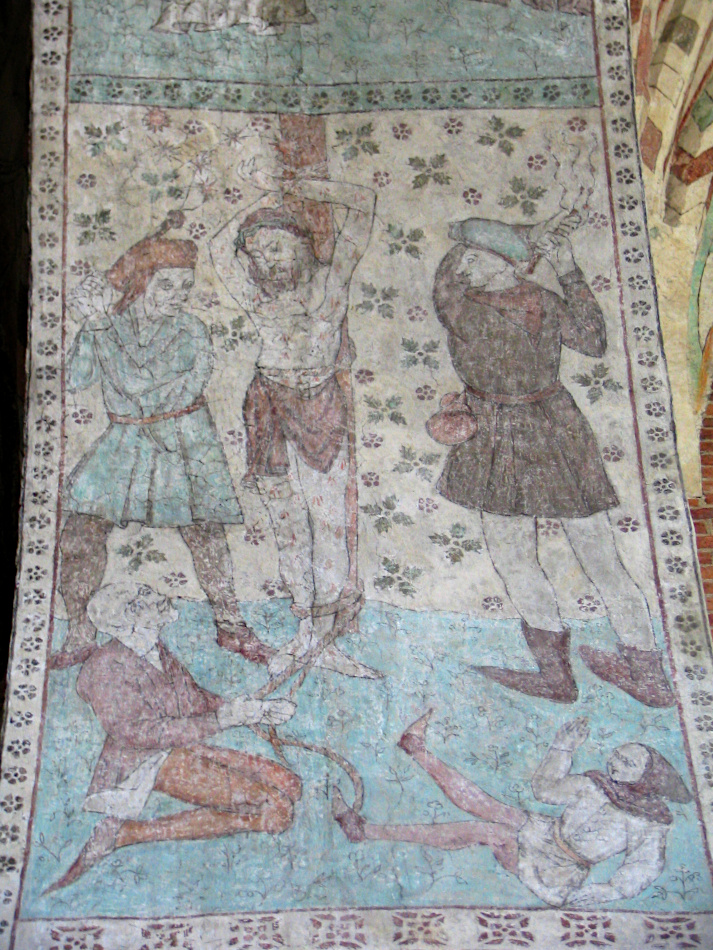 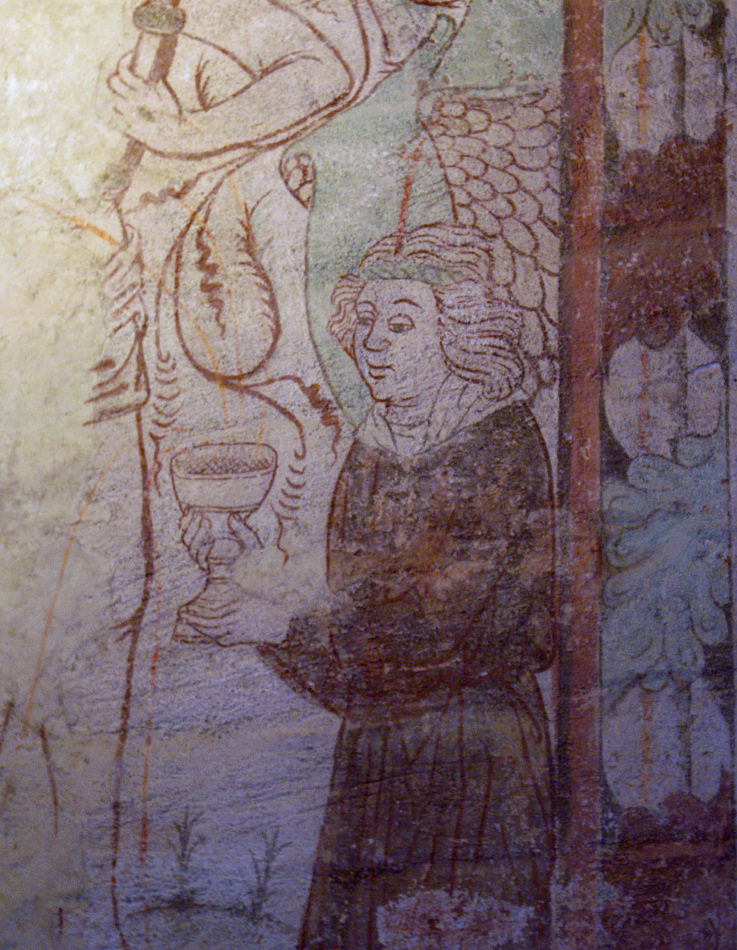 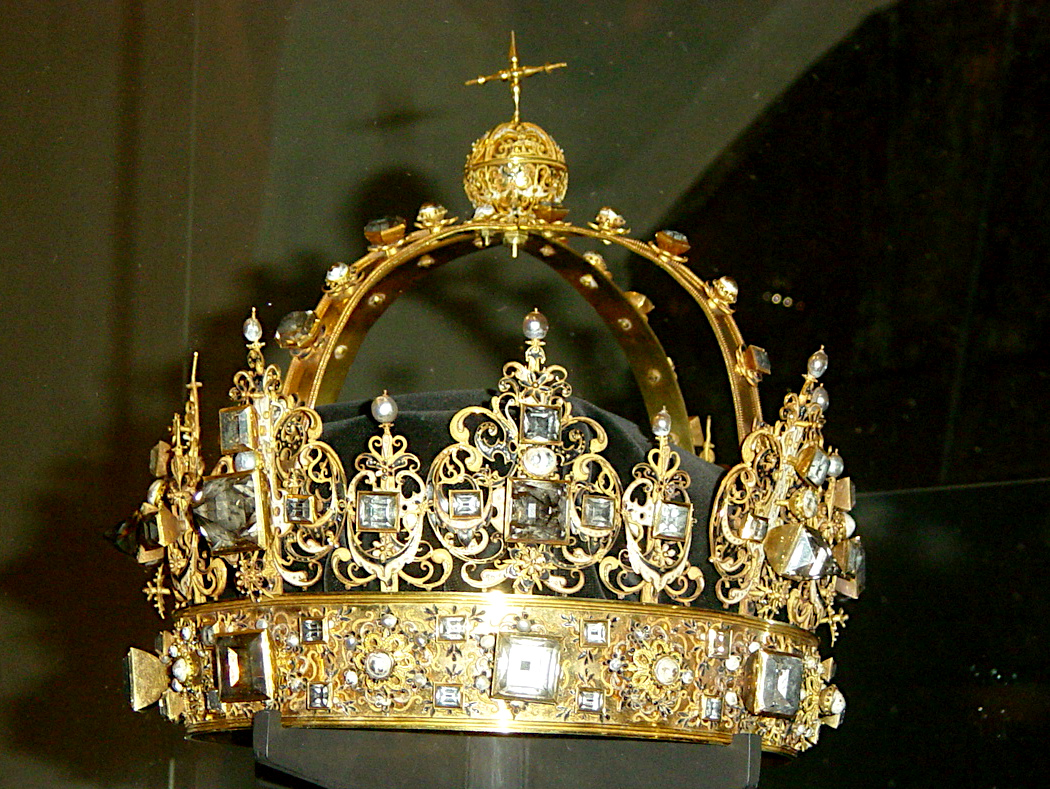 In a little chamber on the left side of the church there is a little 'treasure room'. Here you can see all precious objects, like the one you can see in this photo : the crown of Karl IX. The crown you can see here, and also the sceptre and the apple were made specially made in 1611 for the funeral of Karl IX. When he died in 1612 they were put in his coffin. They were also used at the funeral of Kristina in 1626. The crown, sceptre and apple are all made of gold, black and white enamel, crystal and pearls. The crown was manufactured by Antonius Groth and the sceptre and apple by Peter Kempe.

Update: Unfortunately in July 2018 during a heist the royal regalia - two crowns and a royal orb dating back to the 17th century - were taken from the Cathedral. A worth of approx. 7 million USD, but the historical worth so much more than that! It was so chocking to read and realize that these objects were taken, from this small town so close to me. Having stood there myself, not that long ago, and admired them.

But early 2019 the objects were found! Unfortunately with some degree of damage. The objects are not back on display again in the Cathedral, but there is discussion ongoing to do so in future. I do hope so this will happen, so they are back for all to admire once again.