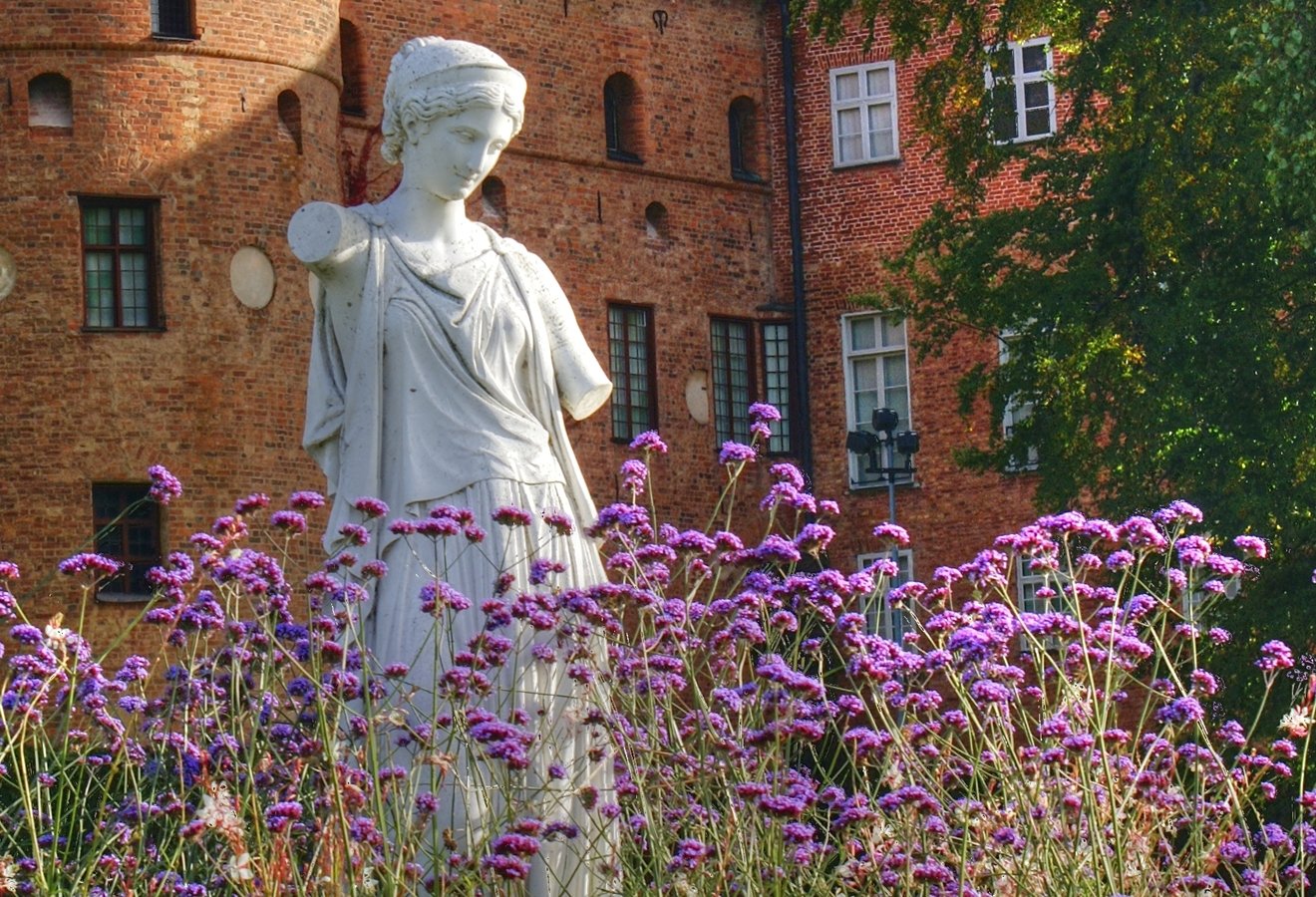 I guess it is time that I write a bit more about 'my' area of Sweden: the area around Lake Mälaren! Mälaren is the third largest lake in Sweden and it also the area that I now call my home. I have been living here for approximately 15 years; to be exact, from the first day that I moved to Sweden. And one of the places that I really enjoy visiting in this area is the cute little village of Mariefred with its impressive Gripsholm Castle.

Please note that I am still busy writing this page about Gripsholm. Quite a few photos and text are uploaded to this page. But if you would like to read the full content, than please come back in a view weeks time when the page hopefully is finalized. 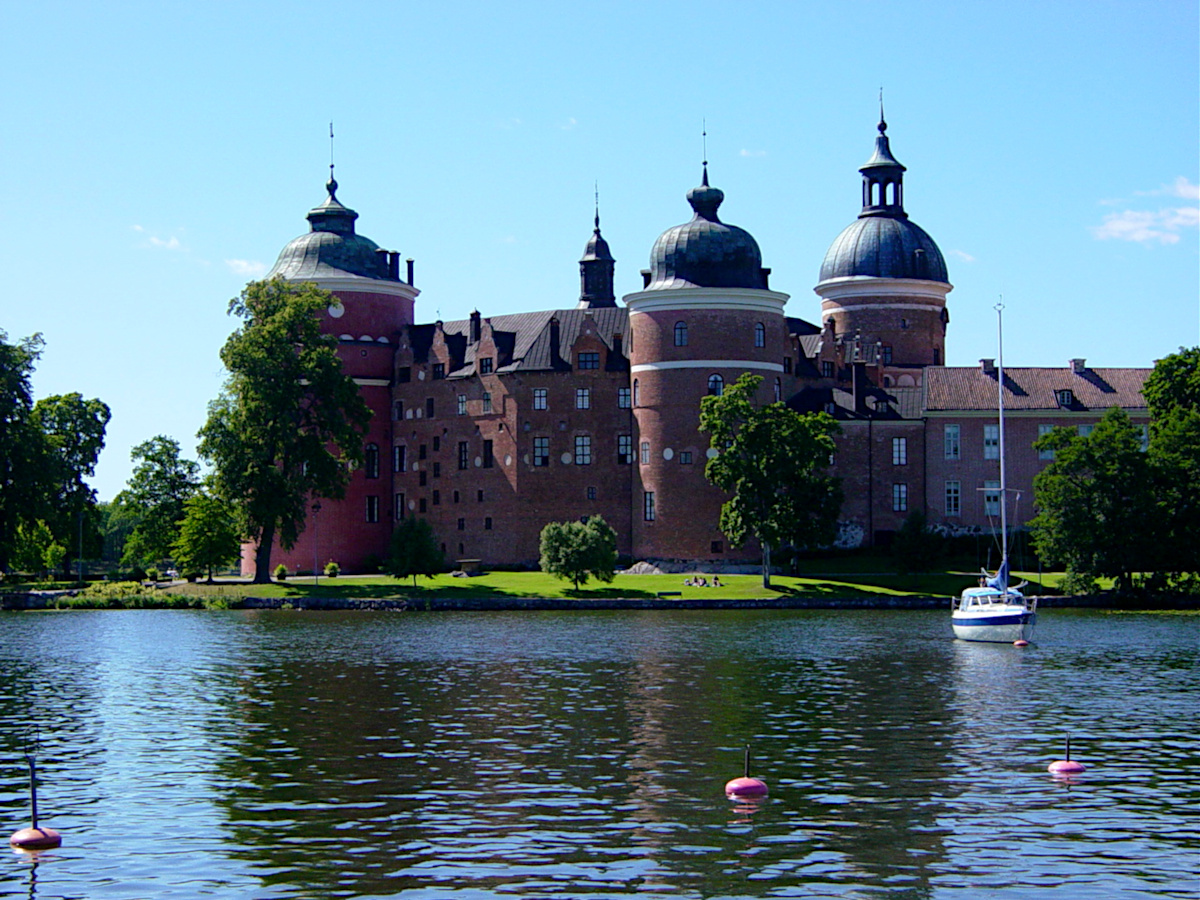 Gripsholm castle is beautifully situated on the shores of Lake Mälaren, next to the village of Mariefred. This is actually not the first castle that was built here. The first castle was built in the second half of the 14th century by Bo Johnsson Grip. And this name also explains part of the name of the castle : Gripsholm. The second part of the name "Holm" means "island", so it actually means Island of Grip.

The castle of Gripsholm is one of the Royal castles in Sweden. This castle started to be build by King Gustav Vasa in 1537 as part of a new system of national defences.

In the castle you can see a lot of Swedish interior design from the 16th to the late 19th century. But the main thing the castle is known for is its great collection of portraits : the Swedish national collection. The number of portraits is huge (the collection has over 4,000 pictures), and it features prominent Swedes from the days of Gustav Vasa until now. I guess you have to know some famous Swedes to really appreciate it. But there are a few names that you might know, like Ingrid Bergman and Greta Garbo. 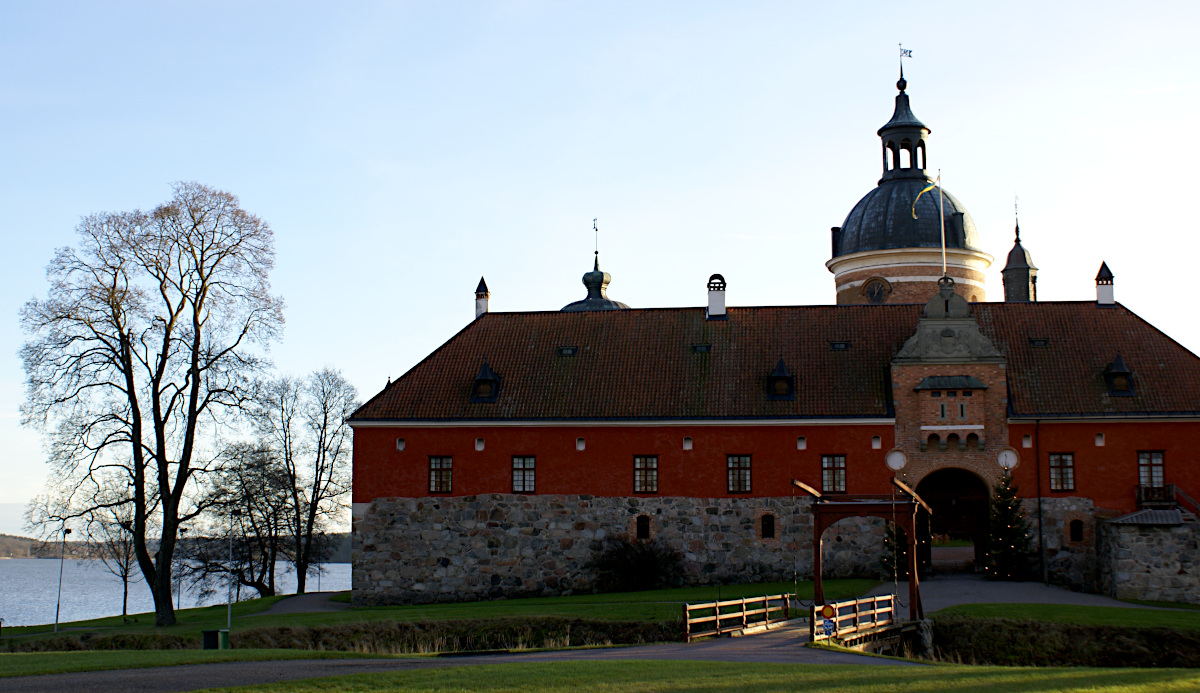 Walking towards the castle

it looks different from every angle 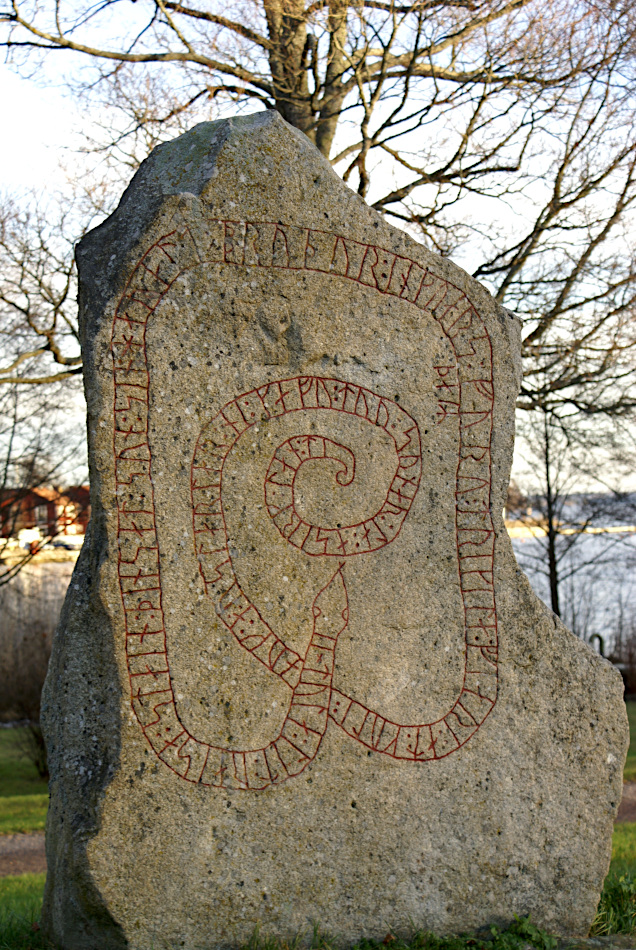 I know you eye is drawn to the castle, and you probably all focused on going directly to the entrance. But really, you shouldn't. If you are intrested in history, you might enjoy a quick stop at the rune stones that are located just outside the entrance. The one to the left is one of Sweden's best known rune stone, and belongs to a group of rune stones called the "Ingvar runestones" (and sometimes referred to as the Serkland Runestones). This one has an inscription from the 11th century. Inscribed on the stone is

"Tola raised this stone after her son Harald, Ingvar's brother"

An interesting part of the text is the expression "Give the eagle blood", which at the time meant "to kill enemies".

Ingvar the Far-travelled lead a viking expedition through Russia to Serkland 'the Saracens land' at the Caspian Sea taking place between 1036 and 1041. The trip however ended in a complete defeat. Few returned, as many died in battle, but most of them, including Ingvar, died of disease. The Ingvars expedition is mentioned on nearly thirty rune stones in the Mälar region. The rune stone at Gripsholm is considered one of the most important of all the "Ingvar runestones".

The runestone was discovered in the early 1820s by Wallin, the caretaker of the castle, and it was then forming the threshold of the cellar of the eastern tower of the castle, the so-called "theatre tower". It was under both side walls of the door and also covered with tar, which suggests that it had been part of another construction before being used as construction material for the castle. It would take an additional 100 years before the stone was retrieved from the castle and could be read in its entirety. 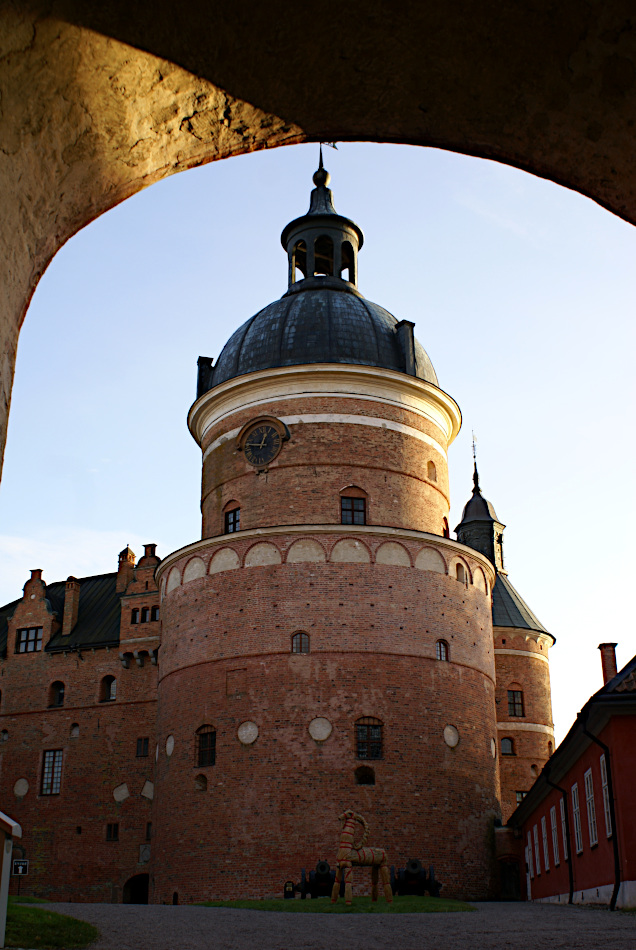 This photo was taken on a winters day. We pass through the gate and the sun is hanging low in sky. It won't be long before darkness falls over Gripsholm castle. But we are still on time to see the impressive tower at the entrance. 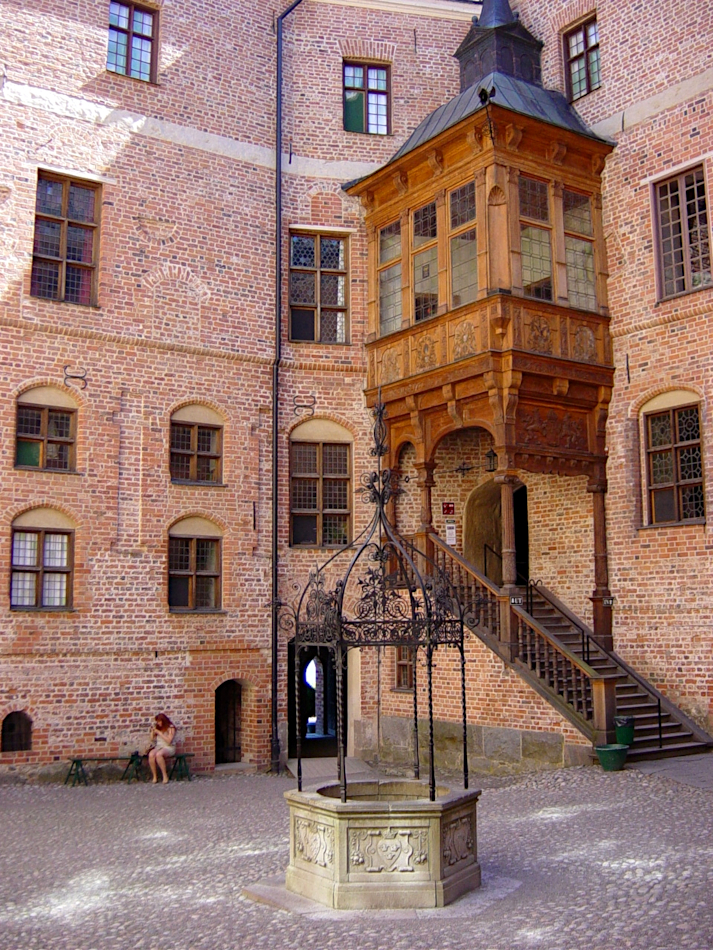 The courtyard at Gripsholm Castle 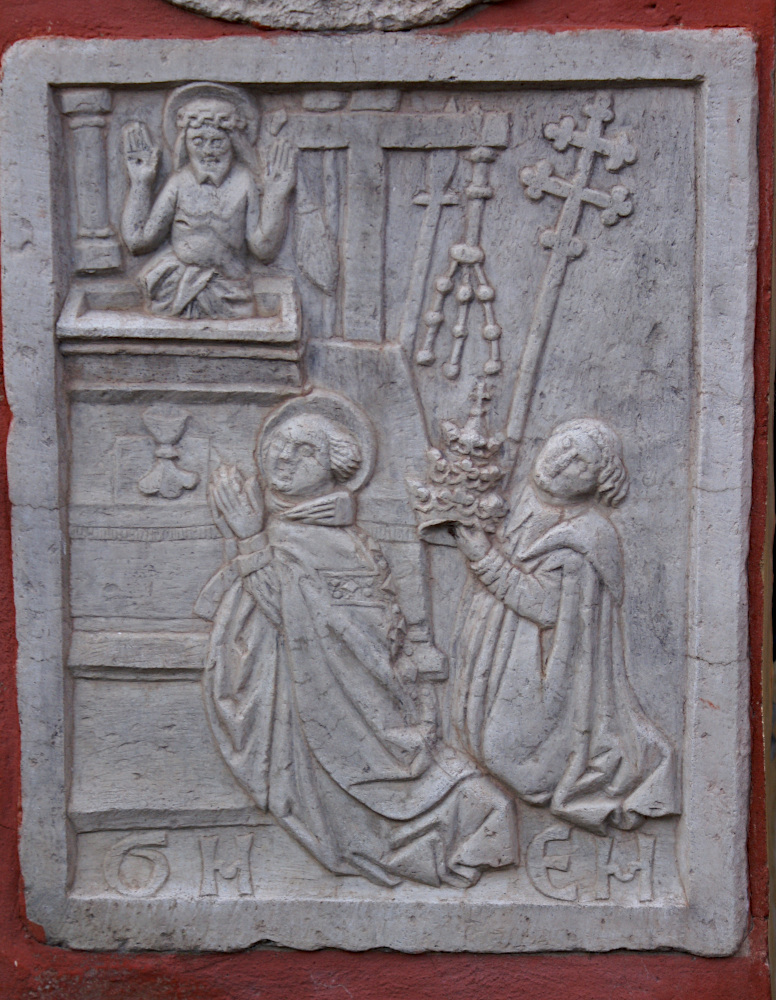 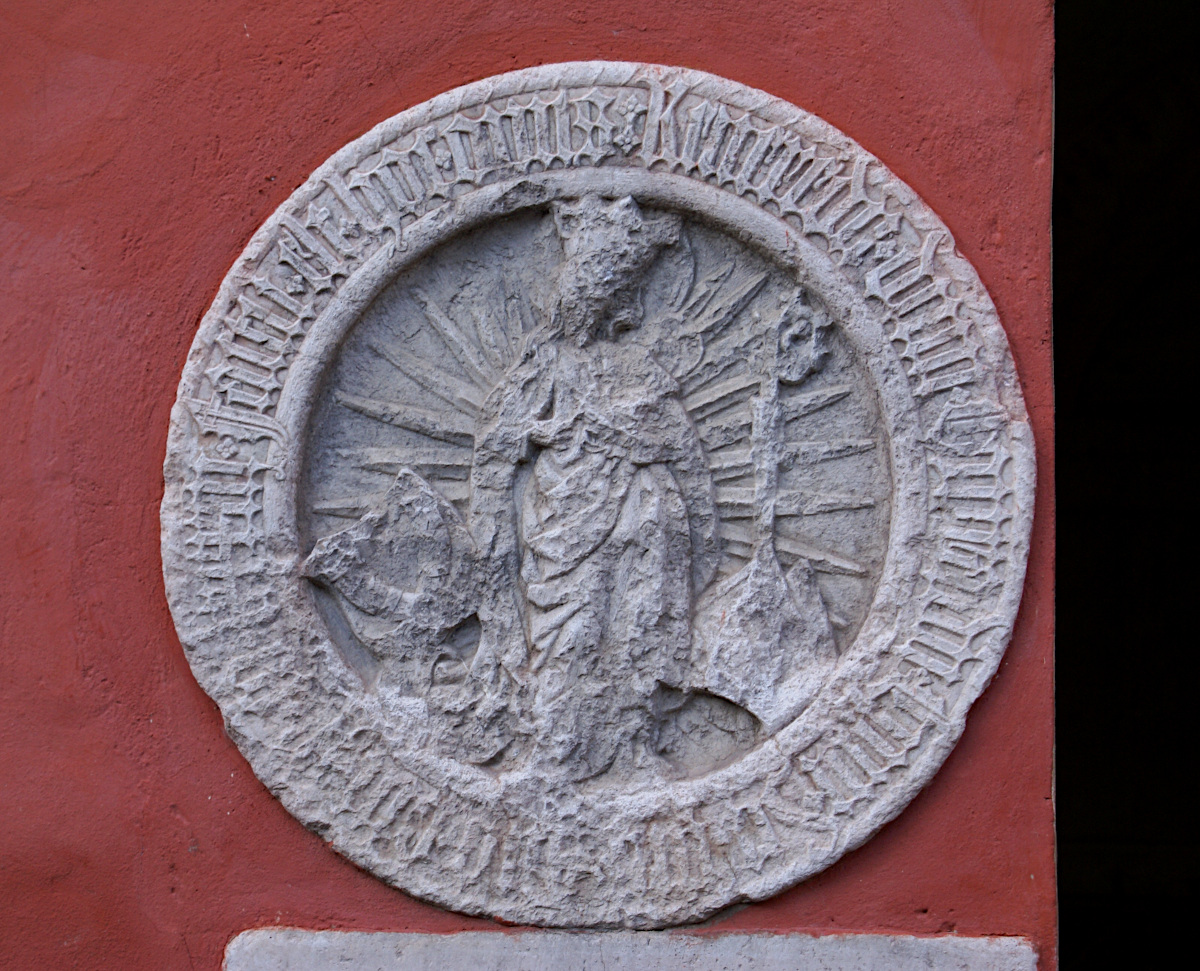 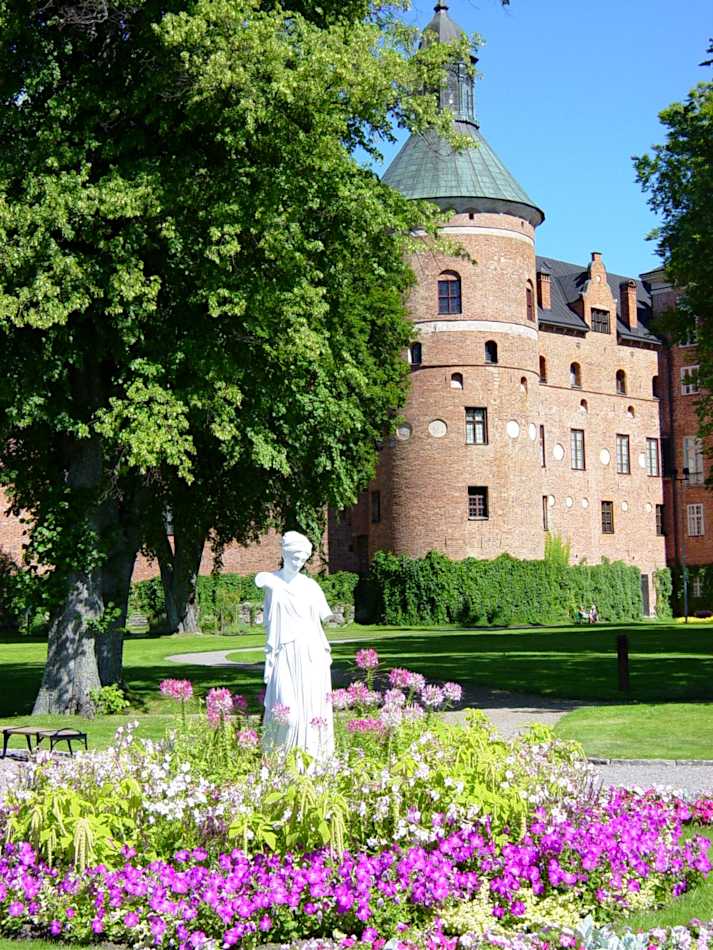 The gardens at Gripsholm

When you visit Gripsholm castle it is nice to take a look at the gardens first and walk around the castle, instead of going inside the castle right away. The castle is situated at Lake Mälaren, and the gardens around the castle are small but nice. It's great to walk here on a nice summers day, watching the views on the castle, the lake, the picturesque village of Mariefred, and of course the beautiful flowers in the garden. 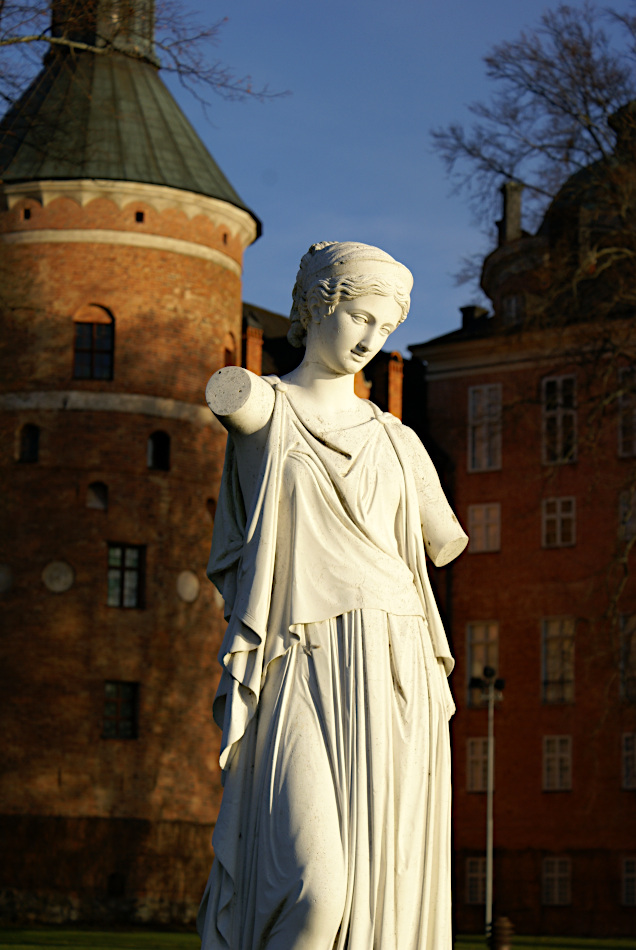 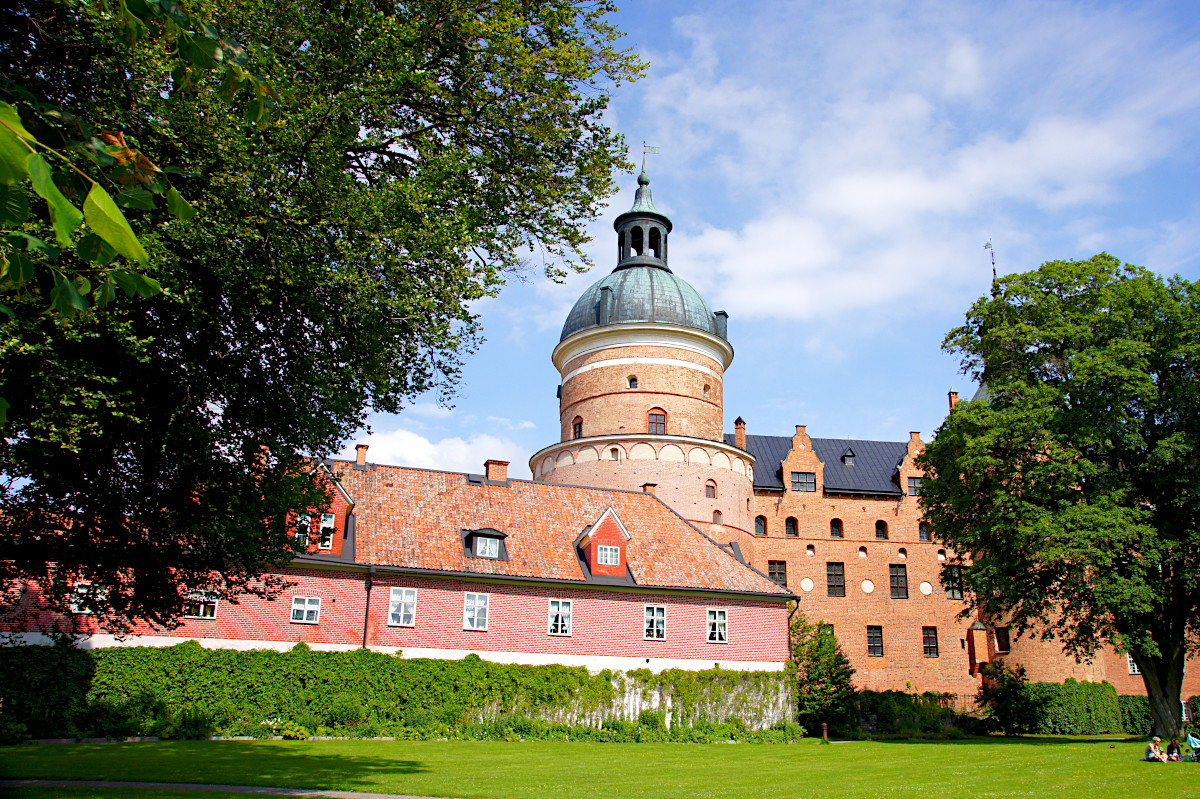 Like a lot of castles, Gripsholm has been altered and added to several times since they first began to build the castle. There are some fun details you can notice of these additions and changes when you look at the castle.

A fun detail of the castle is visable in the photo above. The building on the left side is of a lighter and brighter colour than the rest of the castle and that is due to that the bricks are not real, but painted on as a pattern. They wanted to make the castle look like it was of all brick, and decided to paint the pattern of stones on the walls. It looks great when you look at the castle from a distance; it really looks like a 100% brick castle. But when you come closer you will notice that it is just a painted on decoration, instead of the original brick. I am still not sure if I like it, but it is a fun detail to watch. 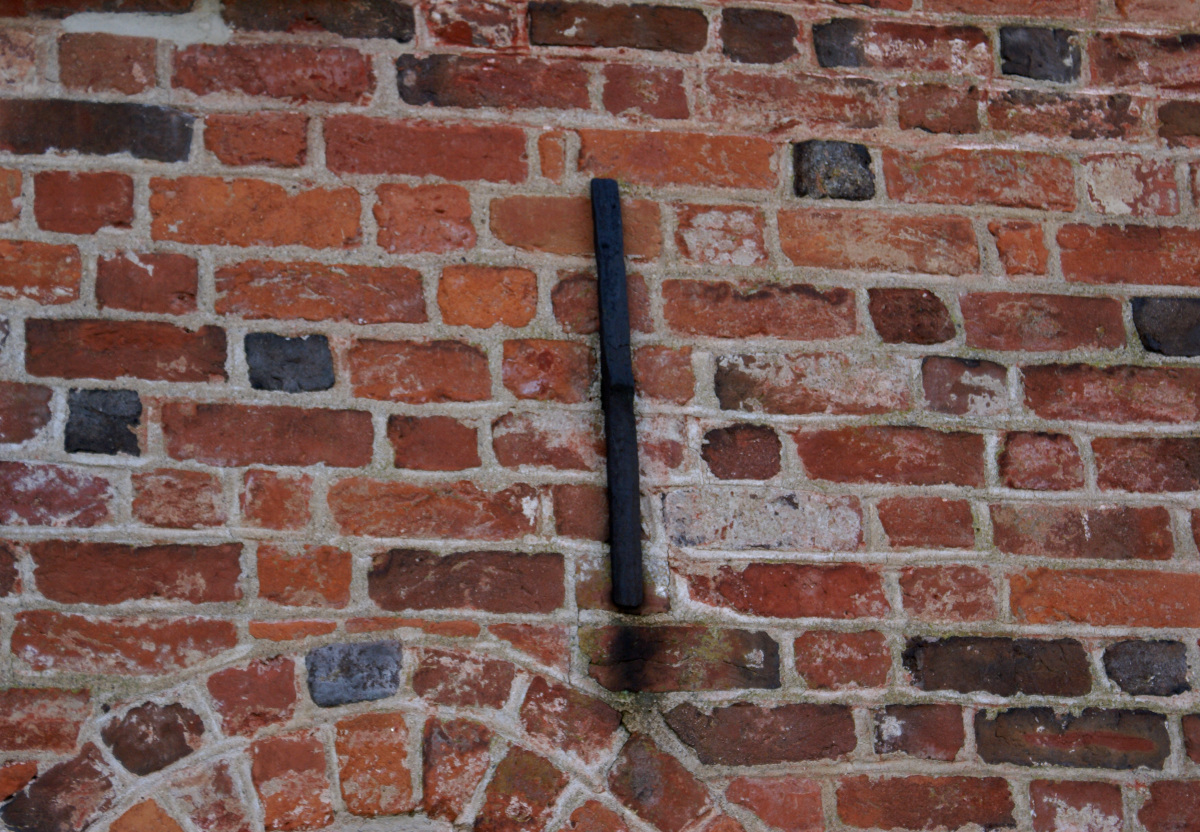 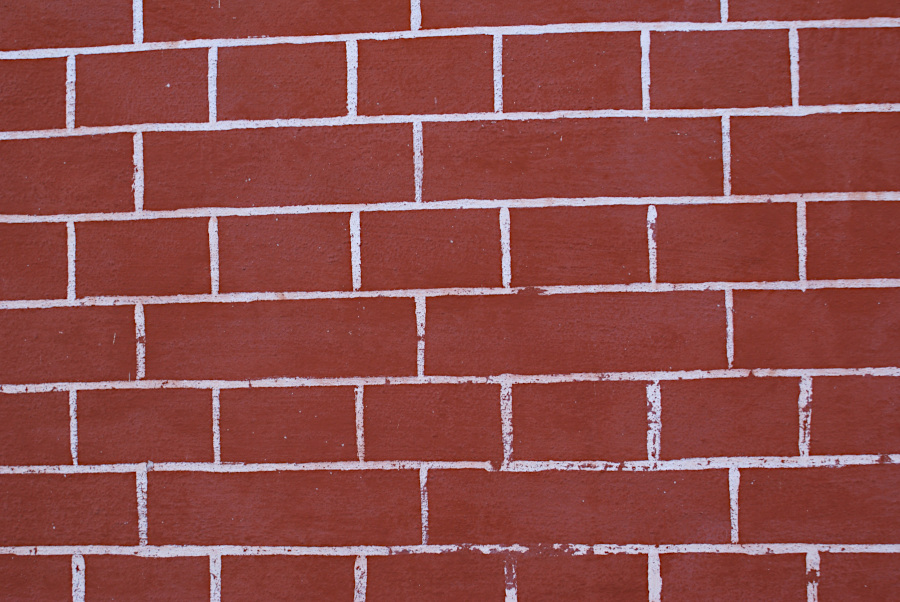 Inside the castle, at the part where the 'members of the court' lived, you can see some alterations. The 'court' got so big that they didn't have enough rooms in the castle to house all the people. It was of course a great honour to live in the castle, so that's where all the members of the court wanted to be. To solve this problem in this part of the castle, the ceilings of the rooms were lowered and an extra floor was created to give the members of the court more space to live. The fun thing to see though is that the windows have stayed the same, resulting that some windows are at weird heights in the room, and sometimes split between the two floors. 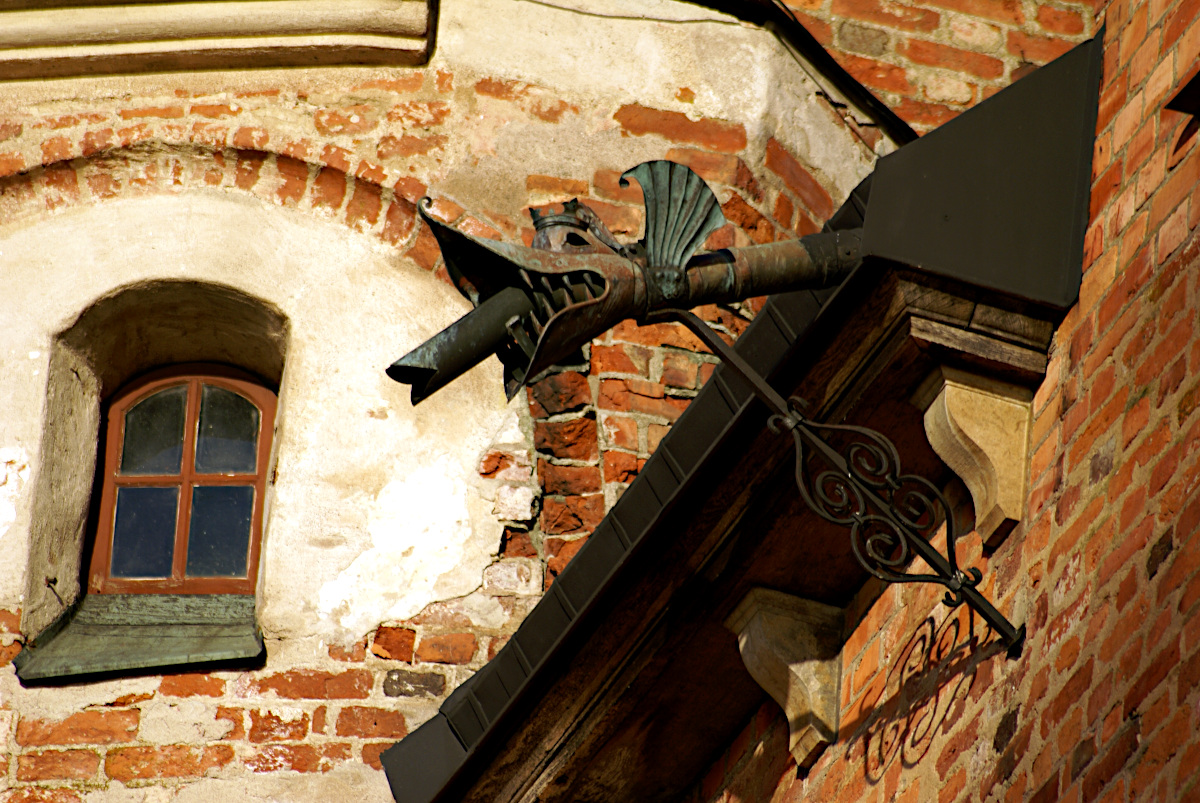 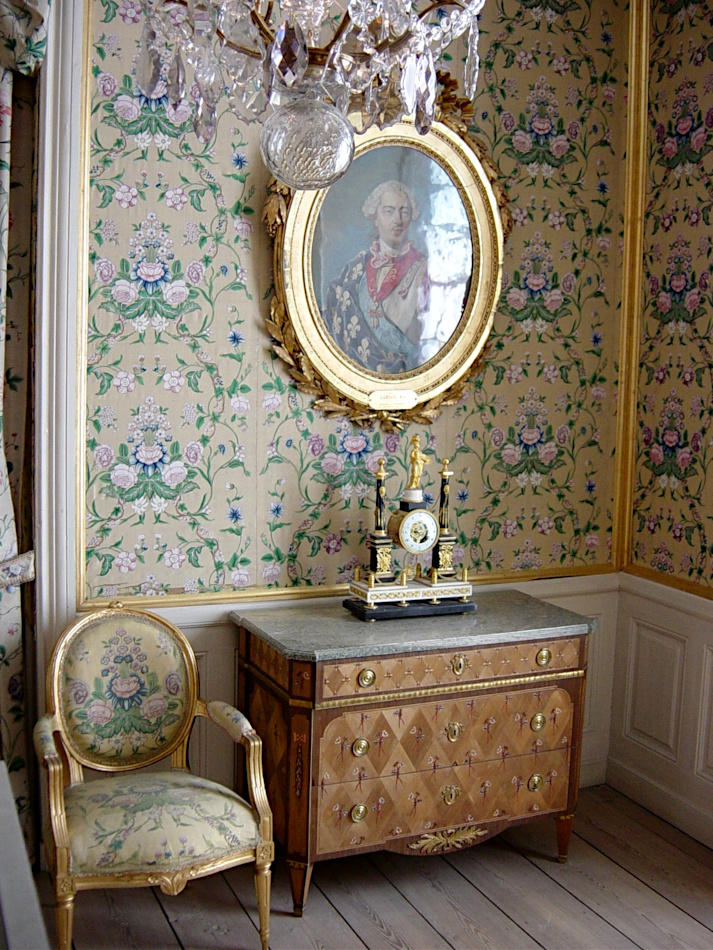 The inside of the castle is huge! I sometimes had the idea I was lost inside the castle with its many rooms and corridors. Many of the rooms are decorated in the original style, like this room, the princess's bed chamber.

The interior decorations in this particular room have remained virtually untouched since 1782. The painted Chinese silken wall-hangings, have faded considerably though. I wonder how bright and colourful it must have looked originally, it must have been fantastic. The clock you can see is from about 1800 and the chest of drawers was made in about 1780.

Beautiful windows in the throne room 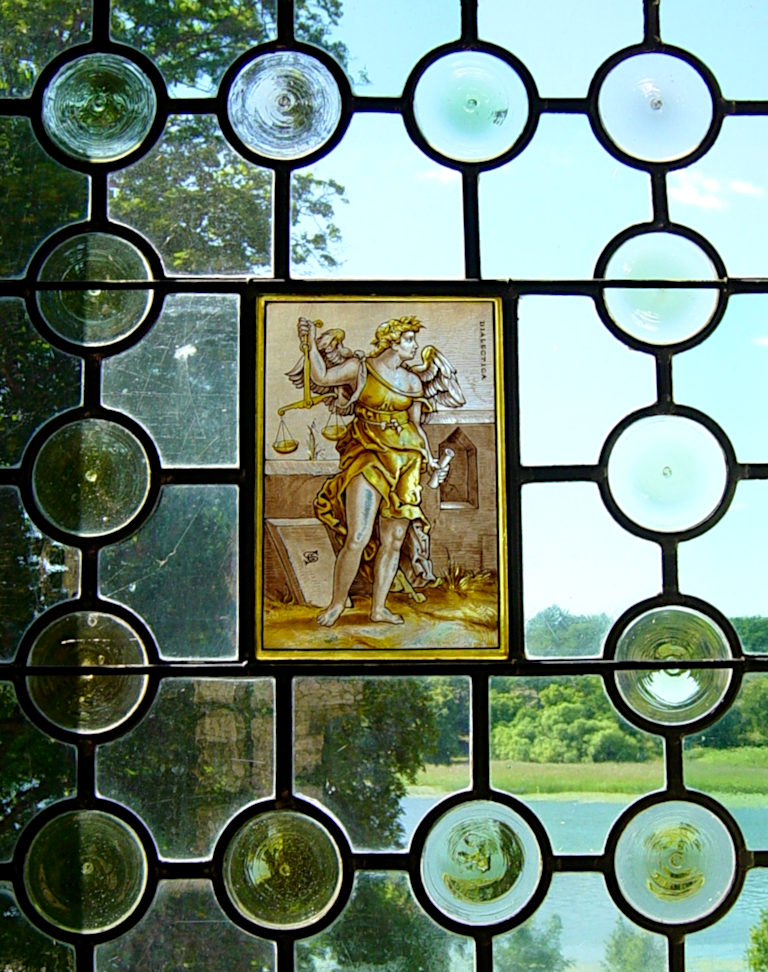 Windows in the throne room 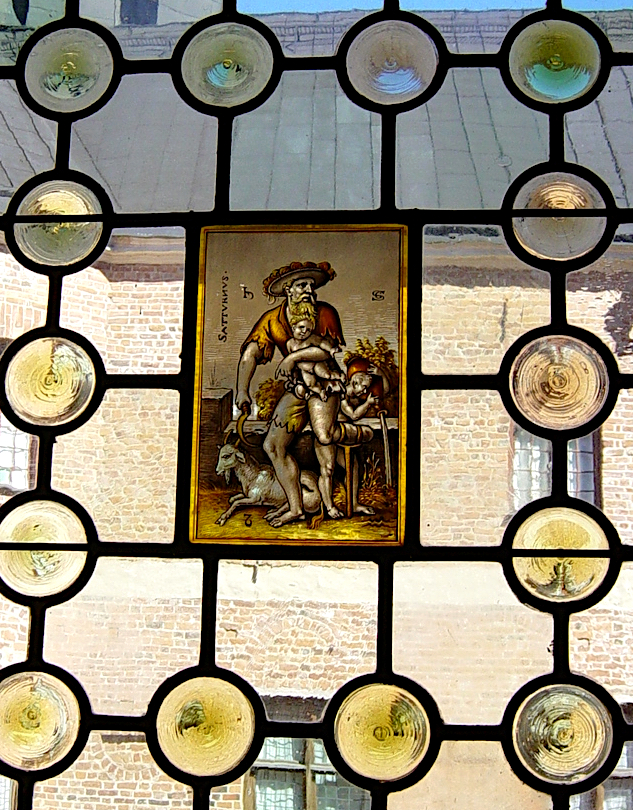 This are two of the beautiful windows in the throne room. The throne room is the biggest room in the Castle and was probably completed during the 1590's. Now it is used as a concert room, with a big piano where I think the throne used to be. This does take away the feeling of the original room, but it is still nice to look at some of the details in this room.

The theatre inside Gripsholm Castle 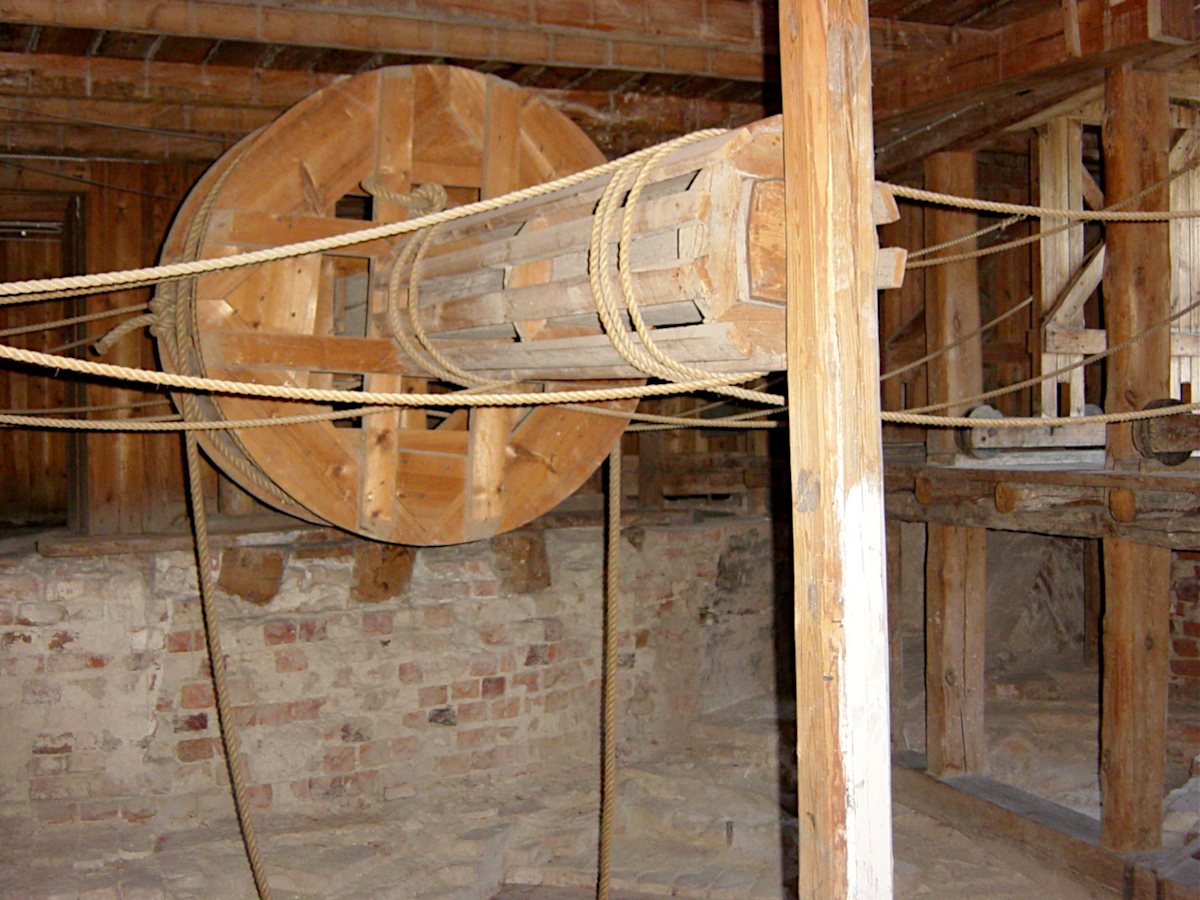 Mechanism to change the decors in the theatre

The theatre in Gripsholm castle is really impressive. I think it is the room in the castle that made the most impression on me. It was build by Gustav III in the 1780's in the old Church tower, now known as the theatre tower. Gustav III loved theatre and that really shows. The architecture of this room is fantastic and it has made the most use of the space. The theatre is one of the best-preserved 18th century theatres in Europe.

King Gustav loved the theatre so much that he was a regular actor in one of the plays performed at Gripsholm Castle. 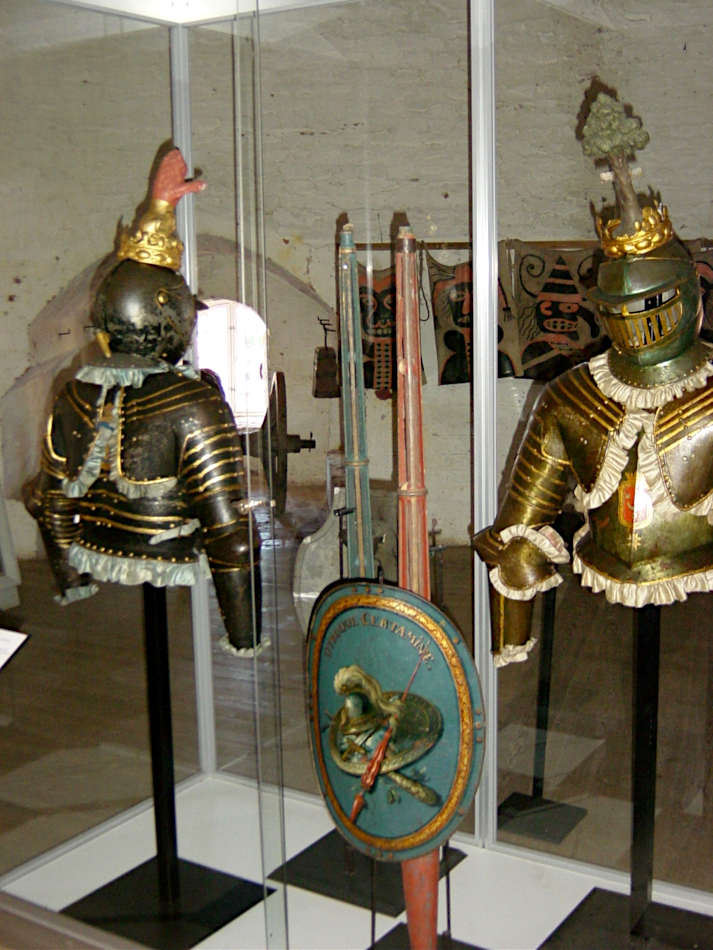 This picture was taken in the Upper Armoury. In this room you can see the suits of armour used in the carousels and tournaments of Gustav III. The room is decorated with wolf nets and flags on the walls, which were still being used in the 19th century for local wolf hunts.

Besides this you can also see a stuffed lion in the room. This lion was given in 1732 by the Bey of Algiers to Frederik I.

Guided tours through the castle 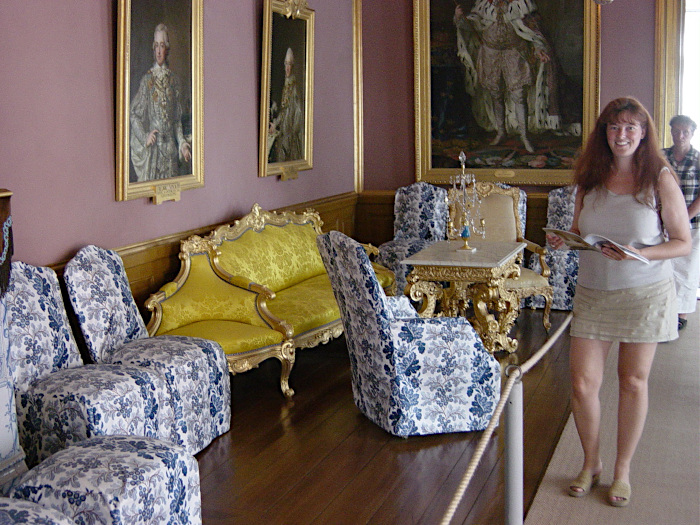 Guided tours through the castle

This is me taking a tour through Gripsholm castle during my first ever visit to Gripsholm. I could have taken a guided tour, but I had to wait for over half an hour, so I decided to buy a guidebook instead and explore the castle by myself. I was in luck though! Halfway my tour through the castle we bumped into a group with an English speaking guide and I was able to have a partially guided tour after all :-)

There are daily guided tours: Between May and September in Swedish at 12:00 and 14:00 and the guided tour in English is at 13.00. The charge for public guided tours is SEK 30 per person and is on top of the entrance fee. The tour takes about 45 minutes. 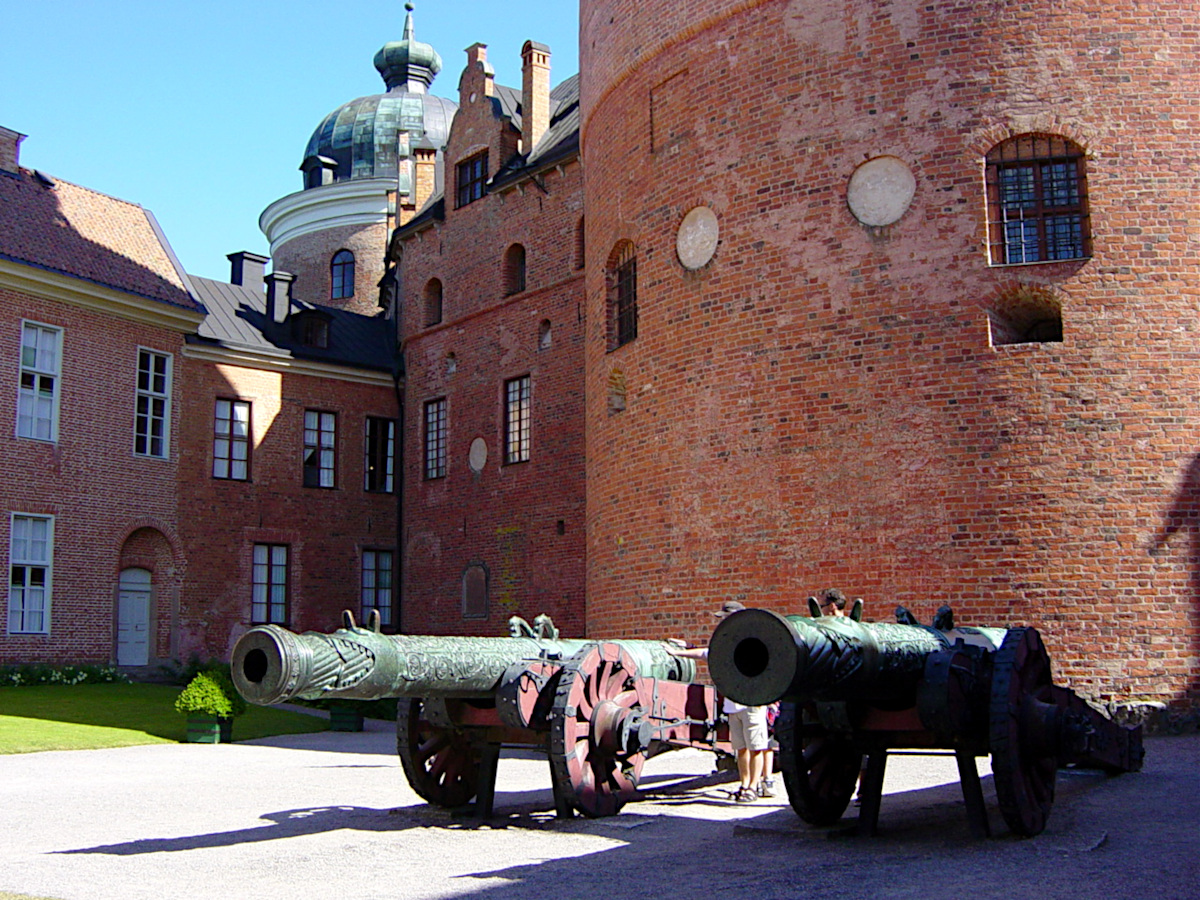 The cannons at Gripsholm Castle

These are the two Russian cannons you can see in the courtyard of Gripsholm castle.

The bigger cannon was cast in 1579 and the smaller one in 1577. The cannons are quite big, and they are actually much larger than most cannons of that time. Both cannons were captured during the war and dragged back to Gripsholm Castle in 1623. Originally both cannons were called 'The Wulf'. One of them, they don't know which, was taken at Narva in 1581and the other at Ivangorod in 1612.

The Swedes renamed the cannons though into "The Boar" and "the Sow". The story goes that they were so annoyed by the task of dragging the big cannons through the mud all the way back to Sweden, that they gave they gave them pig names :-)

The picturesque village of Mariefred 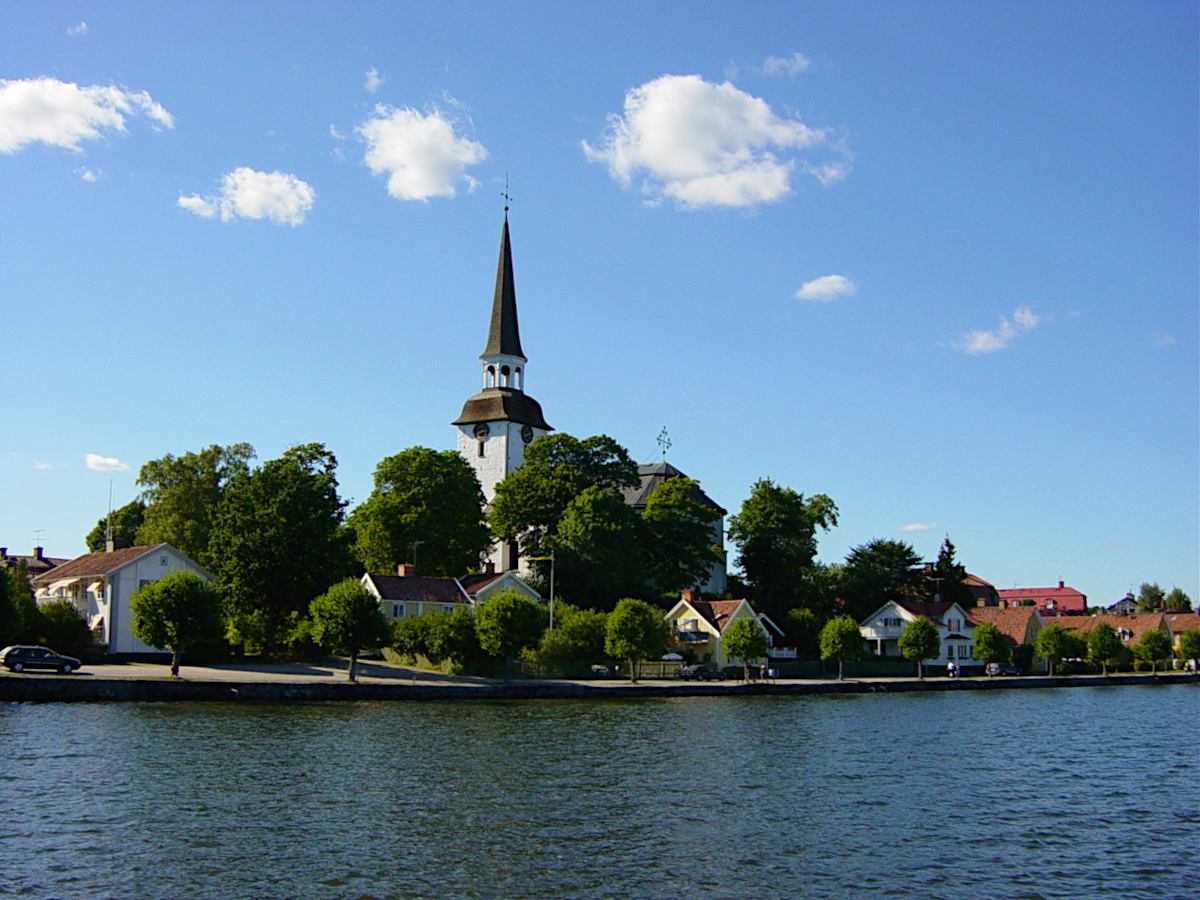 The picturesque village of Mariefred

When you visit Gripsholm Castle, you musn't forget to visit the village of Mariefred as well. There is nothing really spectacular to see, but it's such a lovely quiet and picturesque village. I just loved the atmoshpere of this little town. There are a few attractions though in Mariefred that you might like to see. There is a steamtrain and a little museum at the old trainstation of Mariefred. The steamtrain is still running these days for the tourists.