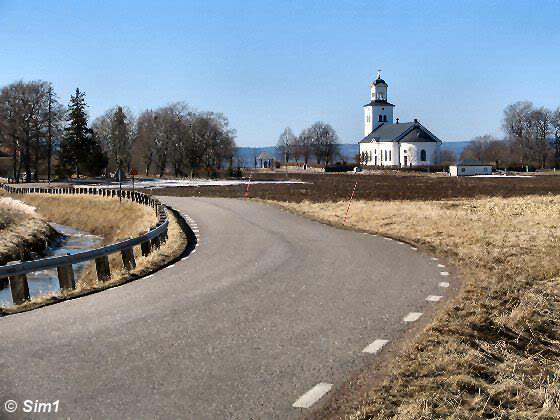 Rök is just a tiny dot on the map in the middle of nowhere. A tiny little curvy road brings you to the village. You'll drive through nice open landscape and in the distance you can see a lovely white church. But there is more to Rök than only that. Maybe it is hard to believe, but this little place is famous! Why? It is the village where you can find the most famous of runestones. The runestone is called the Rök Stone or in Swedish Rökstenen. It has the longest known runic inscription in stone and it is also considered to be the most beautiful of runestones.

The little church of Rök 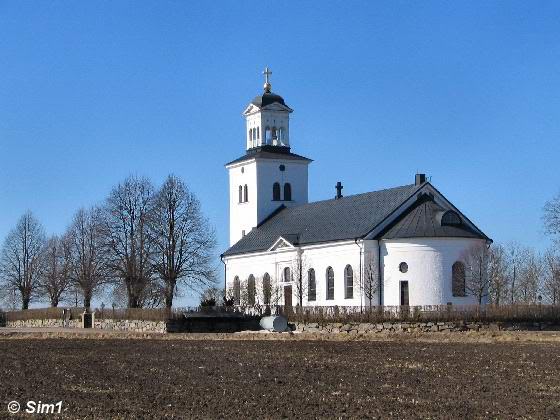 The little church of Rök

The runestone is easy to find, it is outside in front of the little church of Rök. This church is not only lovely to see, it also plays a central role in the discovery of the runestone.

The existence of the Rök stone has been known since the 17th century. It was found as part of the church storehouse. Here it was build into a wall and only the front side of the stone could be seen. When the storehouse was pulled down the stone needed a new spot and it got a place in the entrance way of the new church. But in 1933 it got its own place: right outside the church! A perfect spot as now everyone can admire the runes that are covering it. No spot has been left uncovered: The runes are written on all sides: front, back, top and sides. 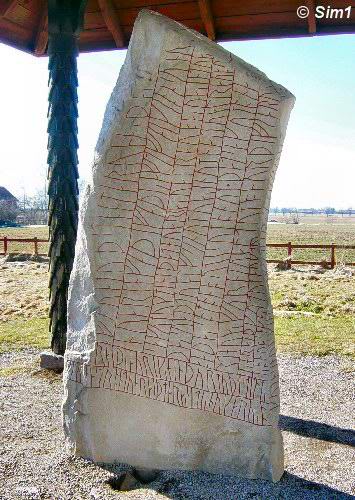 Here is a picture of the famous Rök Stone. Nowadays it is covered with a little roof to give the stone and its visitors some protection from the weather. The stone probably dates back to the 800's, judging from the runic style. A man called Varin erected it in honour of his dead son's memory. The whole stone is covered with runes (front, back, top and two sides), which is rather unique. The runestone is 2,5 metres high and about a meter deep into the ground and it is still in great condition. Only a few parts of the inscriptions are damaged, but most of it is still readable..... if you can read runic that is ;-))

What is a Runestone? 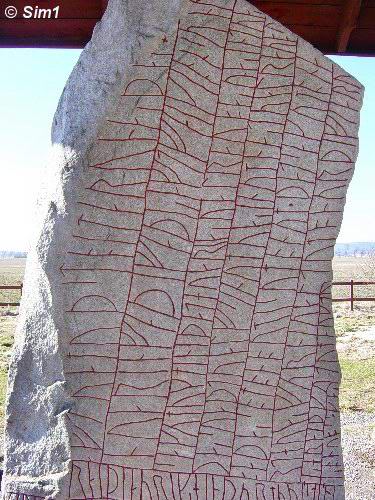 Runestones are standing stones with runic inscriptions on them dating from the Iron Age (Viking Age) and early Middle Ages found in most parts of Scandinavia. Most stones are put up as memorials for a dead person, like this one at Rök as well. On the stones you can find writing in runic, a distinctive sort of alphabet. Runes are an old form of Germanic writing. The oldest runic alphabet is the "Futharken" and consists of 24 runes. The runic writing dates back to the first century after Christ, and were used in some parts of Sweden as late as the 1800s.

I find it just amazing to stand here and see these writings on the stone. A message left by people so many centuries ago and it is still here.... simply amazing!

The Runestone at Rök is extra special because of its inscriptions. No less than 7 different rune types have been used on this stone, which makes it very difficult to decipher. The stone is unique in that it contains a fragment of what is believed to be a lost piece of Norse mythology. It also makes a historical reference to Ostrogothic king Theodoric the Great.

If you are interested in Vikings, history or Runestones, this is a place you might love to visit. If you are not really interested in those kinds of things, I don't think you should make a detour to visit this stone.

Inscriptions on the runestone 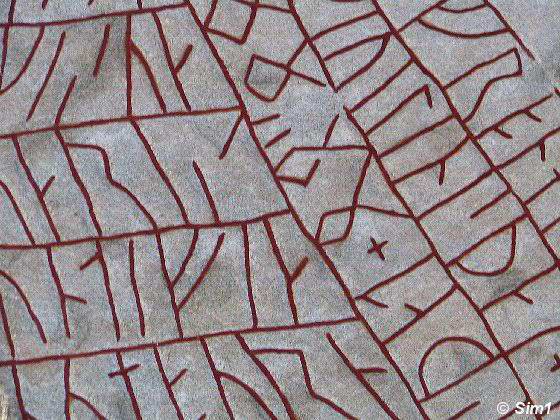 For Vaermod stand these runes. And Varin wrote them, the father for his dead son. I tell the ancient tale which the two war-booties were, twelve times taken as war-booty, both together from man to man. This I tell second who nine generations ago...with the Reidgoths; and he died with them, because of his guilt.

This I tell in the twelfth instance where the horse of the Vakyrie sees food on the battle-field, where twenty kings lie. This I tell in the thirteenth instance, which twenty kings sat on Sjaelland for four years, with four names, sons of four brothers, five called Valke, sons of Radulu, five Reidlulus, sons of Rugulu, five Haisls, sons of Harud, five Gunnmunds, sons of Björn... I tell the tale which of the Ingvaldings was revenged through a wife's sacrifice. I tell the ancient tale to what young warrior a kinsman is born. Vilin it is. He could slay a giant...I tell the ancient tale; Thor Sibbi, guardian of the sanctuary, ninety years of age, begot a descendant. 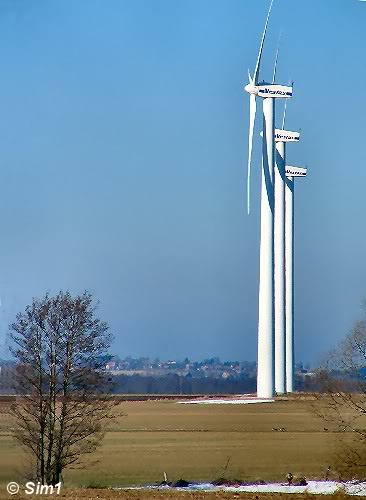 Old and new times go side by side in Rök. In the field next to the church and the runestone, stand these modern type wind mills. It is such a sharp contrast with the runestone.

Do you want to know more about Vikings? 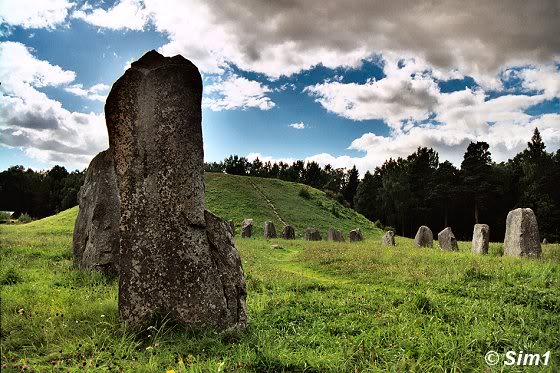 I am rather fascinated by the Vikings and the traces that they left here in Sweden. Maybe it is because I live so close to a Viking site that I am so intrigued by it. Here are some links to my pages where we have written a bit more about the Vikings: 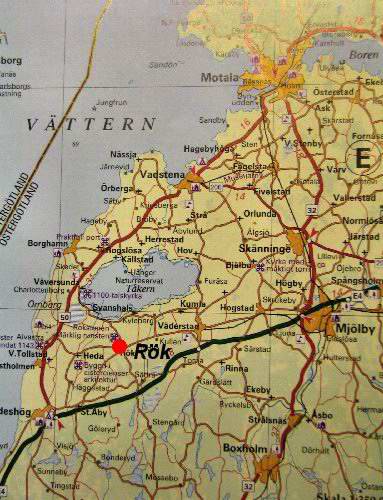 Rök is located in the middle of Sweden in the region of Östergötlands Län. It is very close to the big lake Vättern. Roughly said it is south of the town of Motala, west of Mjölby and directly south of he nature reserve and lake Tåkern. Although Rök feels like being in the middle of nowhere it is still rather easy to reach. The highway E4 (from Stockholm to the south west of Sweden) brings you very close to Rök. Take the exit at Väderstad (between Mjölby and Ödeshög) and follow the small road towards Rök.