September 2020: Who would have thought this would be possible, that we would travel abroad autumn 2020! But we did! We found an opportunity at the very VERY last minute to travel to Iceland! It meant 1 week in quarantine in a nice little house in middle of nowhere, but with great views! And 2 weeks of travelling around the whole island. And being able to travel here during the Covid time has been such a unique opportunity, with hardly anyone around and being able to experience the amazing nature without disturbances. In short: it was a fantastic trip!

The Black Church of Búðir

We got our share of real Icelandic weather during the past few days: storm winds, vertical rain, hail, wet snow, freezing temperatures, slippery roads, not the weather and conditions to go out and explore more of beautiful Iceland! So we got 'stuck' a few days on the peninsula of Snaefellsnes in western Iceland.

And today is our very last day in Iceland and very early tomorrow morning we will be on the plane on our way home. But we are not leaving before making a tour around the beautiful Snaefellsnes peninsula! Something I have been looking forward to so much.

And this very last day is treating us well, we are having some glimpses of sunshine and blue sky. And well, of course combined with the occassional shower. It is a cold day however, just above freezing, brrr it feels cold outside! The mountain got a fresh coat of snow last night, and the autumn colours get deeper and deeper for each day that has passed. And that is actually perfect weather for a stop at the black church of Búðir, as this is maybe not so much as a destination, but more of a photo stop. 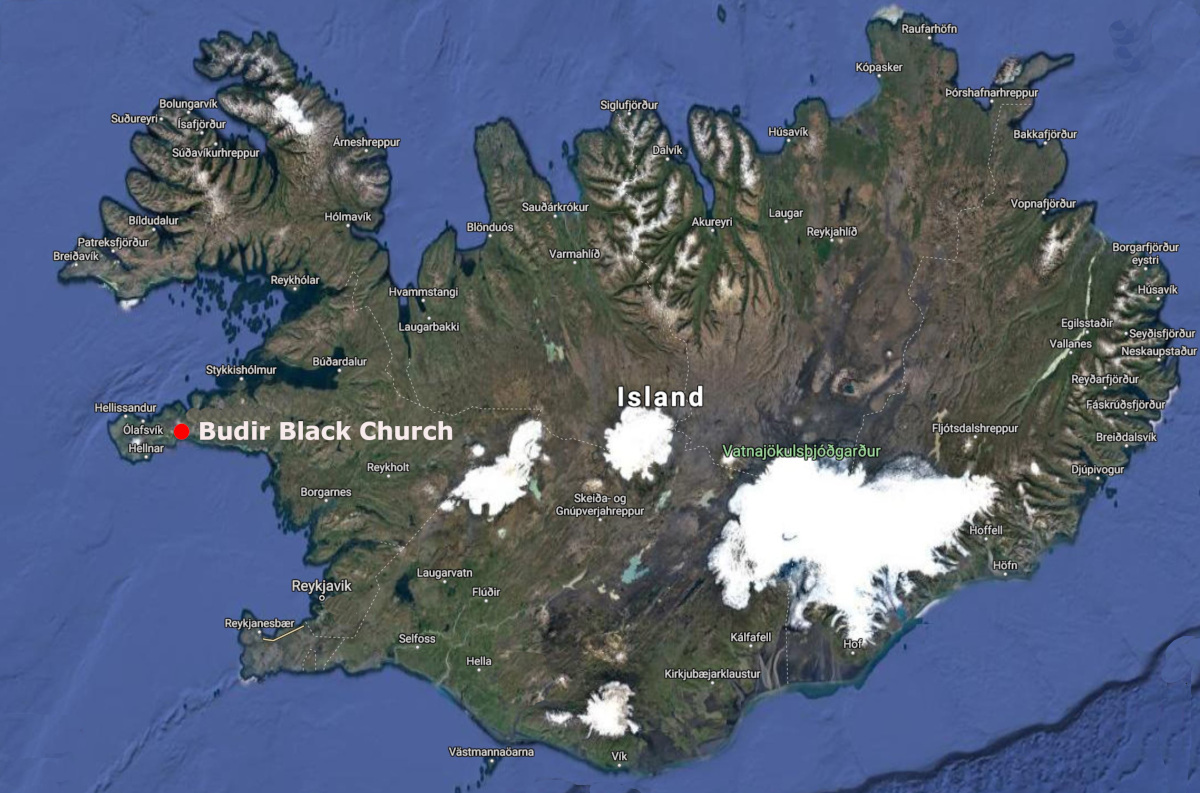 But before I continue, please let me give you an idea where you can find Búðir on the map. It is located about 175 kilometers / 2:15 hours drive north-west of Reykjavik on the southwestern shores of the Snaefellsnes peninsula.

Now don't make the same mistake as we did and set you GPS on Búðir! We just drove by the exit towards Búðir Black Church, when I suddenly realized that I saw the church in the distance on the right hand side. So we quickly made a u-turn and drove into the "Búðavegur" road leading towards the church, which is actually located around 6 kilometers from Búðir. 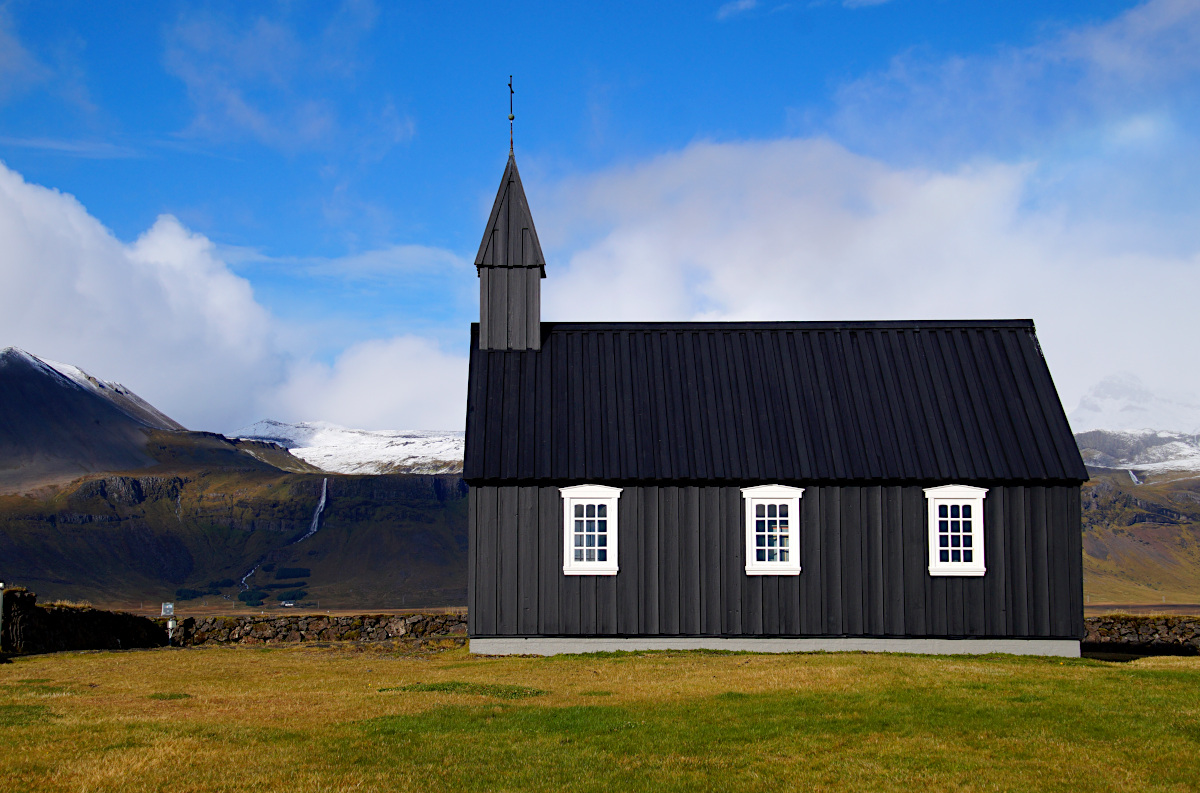 Búðir church was not one of my favourite stops on our route, but yes, I have to admit that it is located very picturesque in the surrounding landscape. Somehow it has gotten extremely popular for people to take photos of this church. I guess it is stricking to many as it is totally black, which is quite unusual for a church, and located far away of everything, hugging the coast and having the dramatic mountains as a backdrop.

What you don't see in the photos is the adjecent white big hotel Budir, which is appearantly a very popular hotel. I personally had no idea it was so close to the church, and it makes a bit of a hassle to take photos here. I either hid it exactly behind the church so you do not see it, or located outside of the frame.

If you look closely at the photo above you can see a waterfall in the far distance on the left side of the church. This waterfall is called Bjarnafoss and it is an absolute gem. I can really recommend including a stop here if you do have the time. 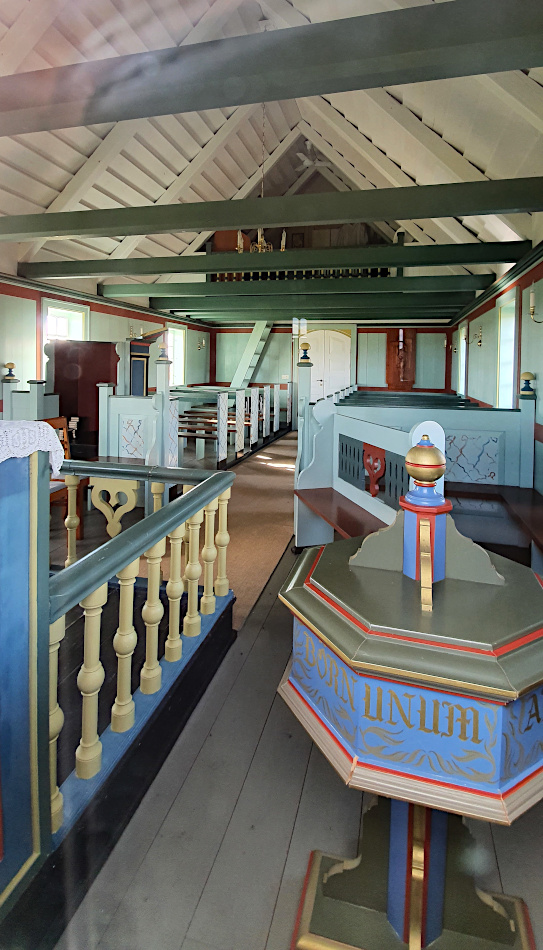 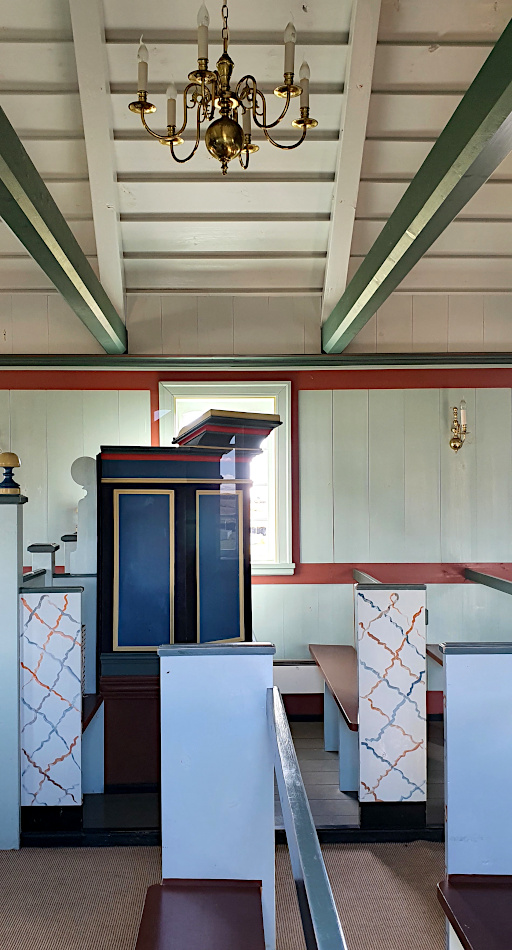 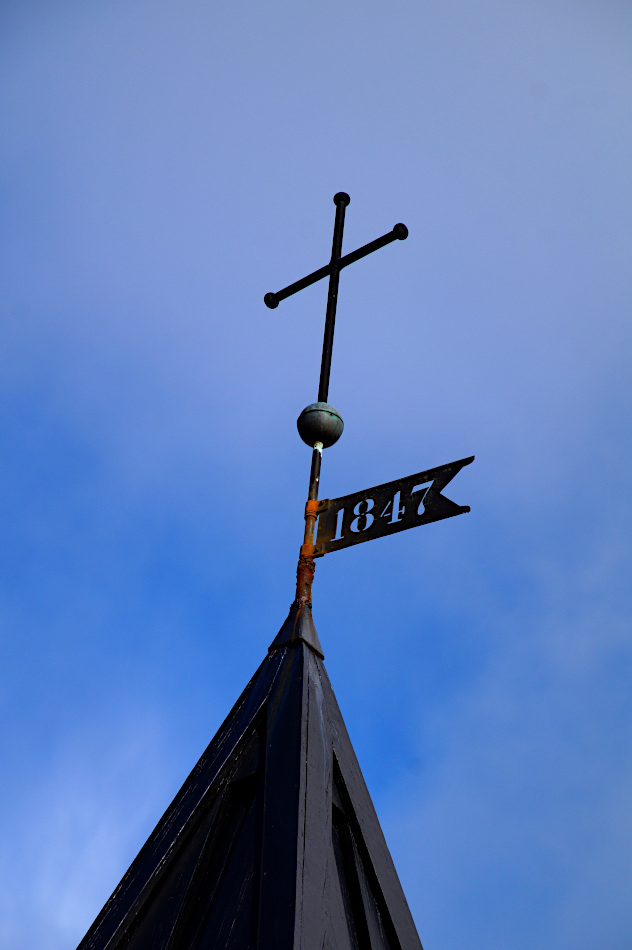 Unfortunately the church was closed due to the Covid. But we managed to take a peak inside through one of the windows to admire the colourful interior. 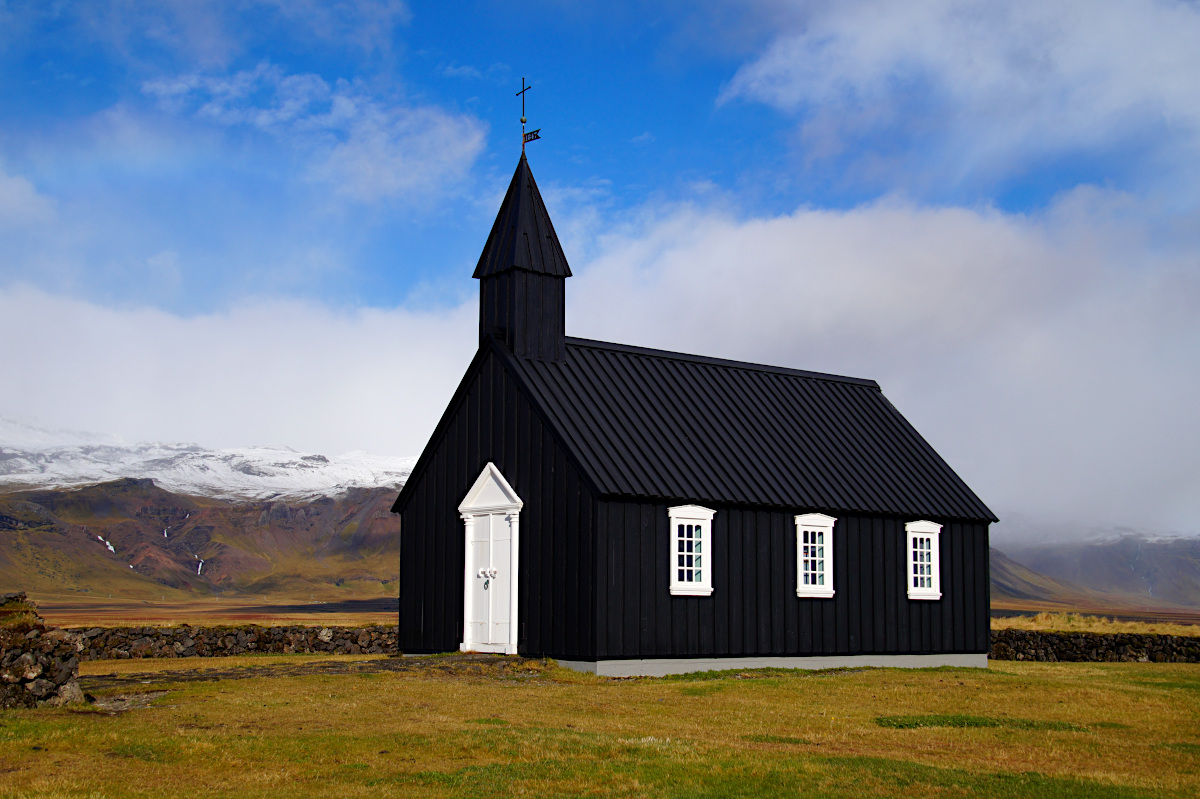 Once Búðir was once a prosperous fishing village and one of Snæfellsnes' most active trading posts. Nowadays the only thing remaining is this black wooden church, Búðakirkja. Medieval sources describe Búðir as one of Iceland's major ports, most likely dating back to the earliest settlement of Iceland.

The history of this church dates back to the 1700's. And as all places in Iceland there is a tale attached to the place: When it came to deciding the location of the church, an old woman reportedly suggested making a man spin in circles until he became dazed and then have him shoot three arrows into the air. Where the third arrow landed, the church should be built. And so it happened that a small turf chapel was built here in 1703, where it stood until it was dismissed by orders of the Danish King Christian VIII in 1816.

After many years the priests council allowed for the construction of a new house of worshipas long as the residents of Búðir would fully finance the project and see to its maintenance. 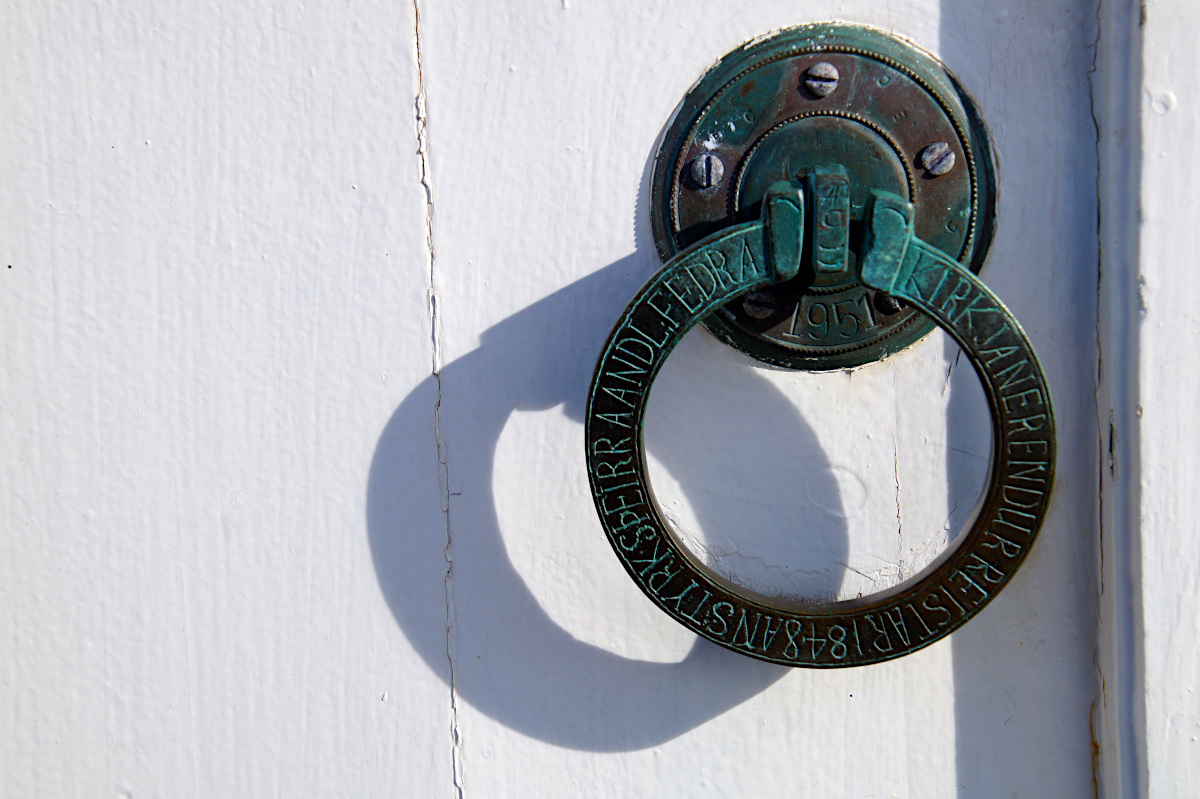 I just love the door handle on the church. I have seen similar in the area on other churches, where dates are engraved in the door handles. Here you can see amongst others the date 1951 when the church was restaurated. It has been renovated a few times more since than. 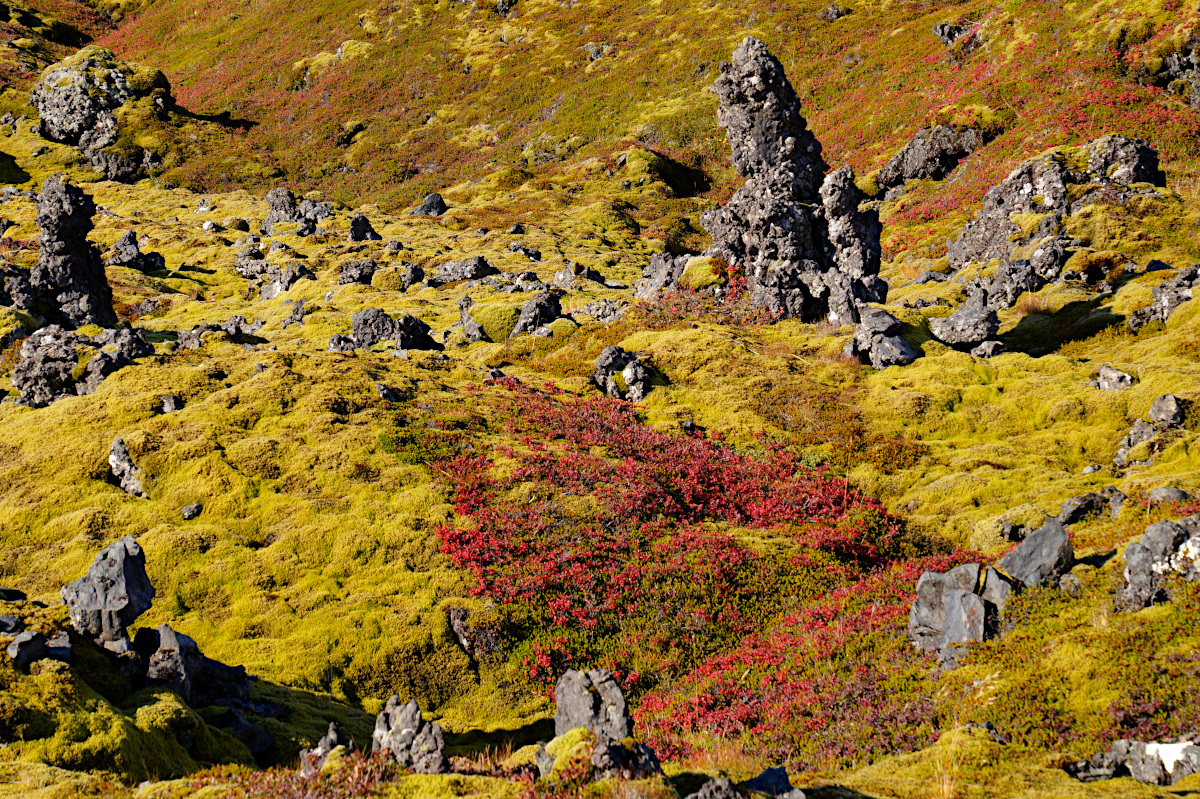 The road to the church leads you through the stunning Búðahraun lava field. The mosses covering the lava fields are a joy for the camera, and the the autumn colours are making it even more stunning. I wish I had some more time here as there is appearantly a walks over the Búðahraun, from Búðir heading southwest along the coast to Frambúðir. I think that would have been a stunning hike to make. 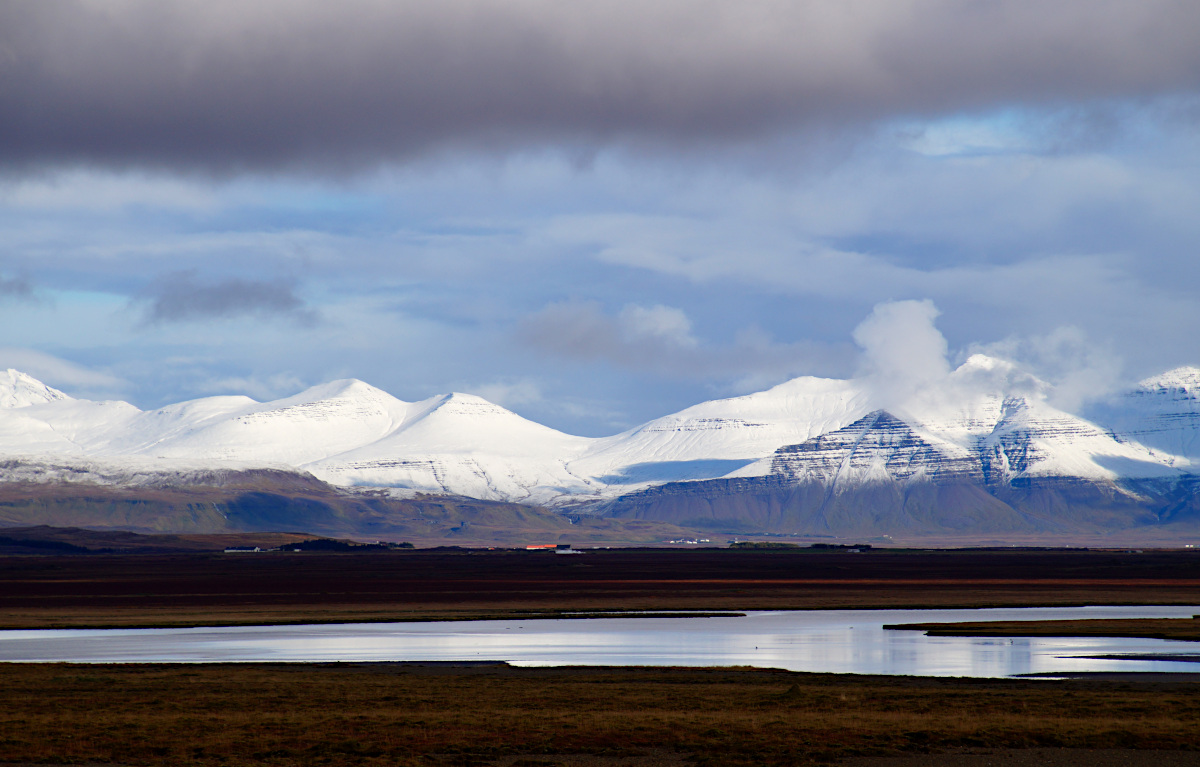 Our trip to Iceland has come to an end. We leave the black church of Búðir behind us and drive towards the snow coated mountains and from there southwards to Reykjavik and the airport. The trip through Iceland truly has been amazing, and it is hard to say goodbye to these stunning lanscapes!