Sim1 around the world
My travel photos and stories

In and around Stockholm, Sweden

Stockholm is a great city to visit if you are interested in musea. There are quite a few of them, and some of them are for free. And the Etnografiska museum (the Museum of Ethnography) is one of these! At this moment at least, Oct 2019, who knows if this will change again in future.

Although sometimes a bit chaotic in their displays, with not that many descriptions with each item, they have some wonderful objects in their exhibitions. This is especially the case if you like masks and statues like I do. The museum has collections from Asia, Africa, Australia, Oceania, America, and Greenland. What you will find here is lots about the folklore, beliefs and practices of different cultures around the world. Most of the objects in the museum date back to the 19th and 20th century

Below you will find a photo impression taken during some of my visits to the Etnografiska museum. Some parts of the exhibitions change, but some you will recognize if you have been here before. It never bores me to go here though, as there is always something that captures my attention and fascination. My latest visit was during October 2019, and the majority of the photos in the impression below are from that visit. 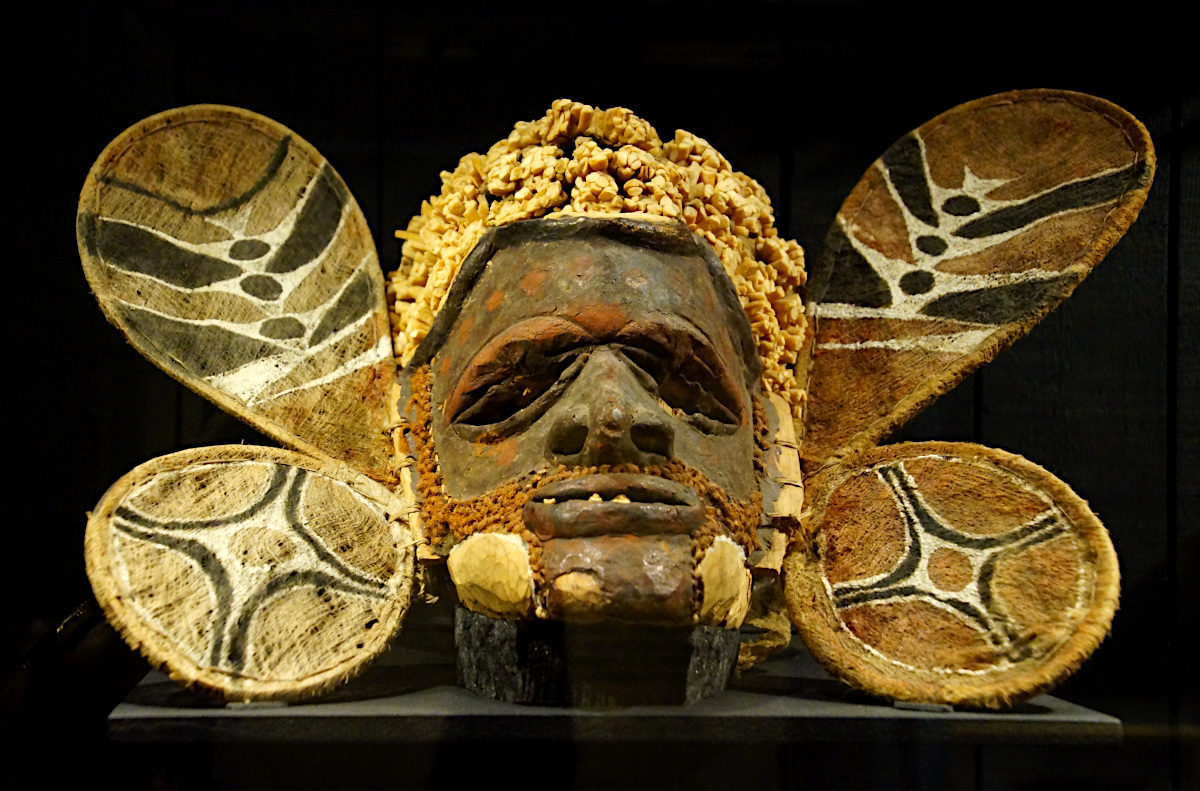 The photo above is taken from on one of the top shelves of the "Magasinet" (the storage) in the Etnografiska Museum. The "Magasinet" is the part of the museum where you can find a whole gathering of objects in all styles and form and from all corners of the world. It is a wonderous world of shelf after shelf of artifacts, all puzzling to the mind. A place where I could spend hours and hours wondering what the objects are, their history, and the people they belonged to.

And one of the objects my eyes were drawn to was this dance mask (photo above). It is a dance mask, and even more specific a Tatanua mask. This is a type of traditional mask made by the natives in the province of New Ireland, Papua New Guinea. The masks are made of wood and other natural materials and used in funeral ceremonies called Malanggan (also spelled malangan or malagan). They are made to celebrate the dead person's characteristics, and as you can understand, these carved masks may take many months to construct.

In the photo below you can see another of these Tatanua masks from the province of New Ireland in Papua New Guinea. This time a mask in carved wood, face white, red around eyes, black around mouth. Sea sponge is sewn onto the bast fabric. The mask was included into the museum collection in 1887. And to give you an idea about the size: all these masks are about 40 centimers in height. 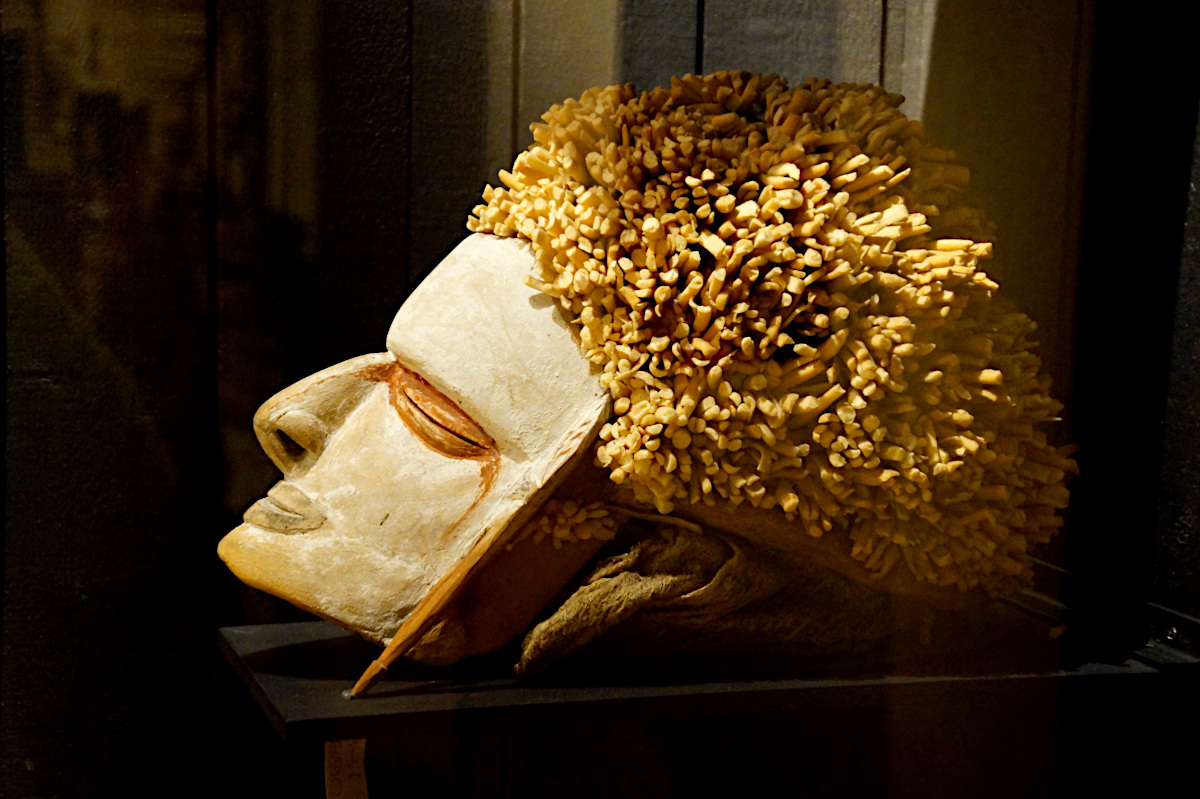 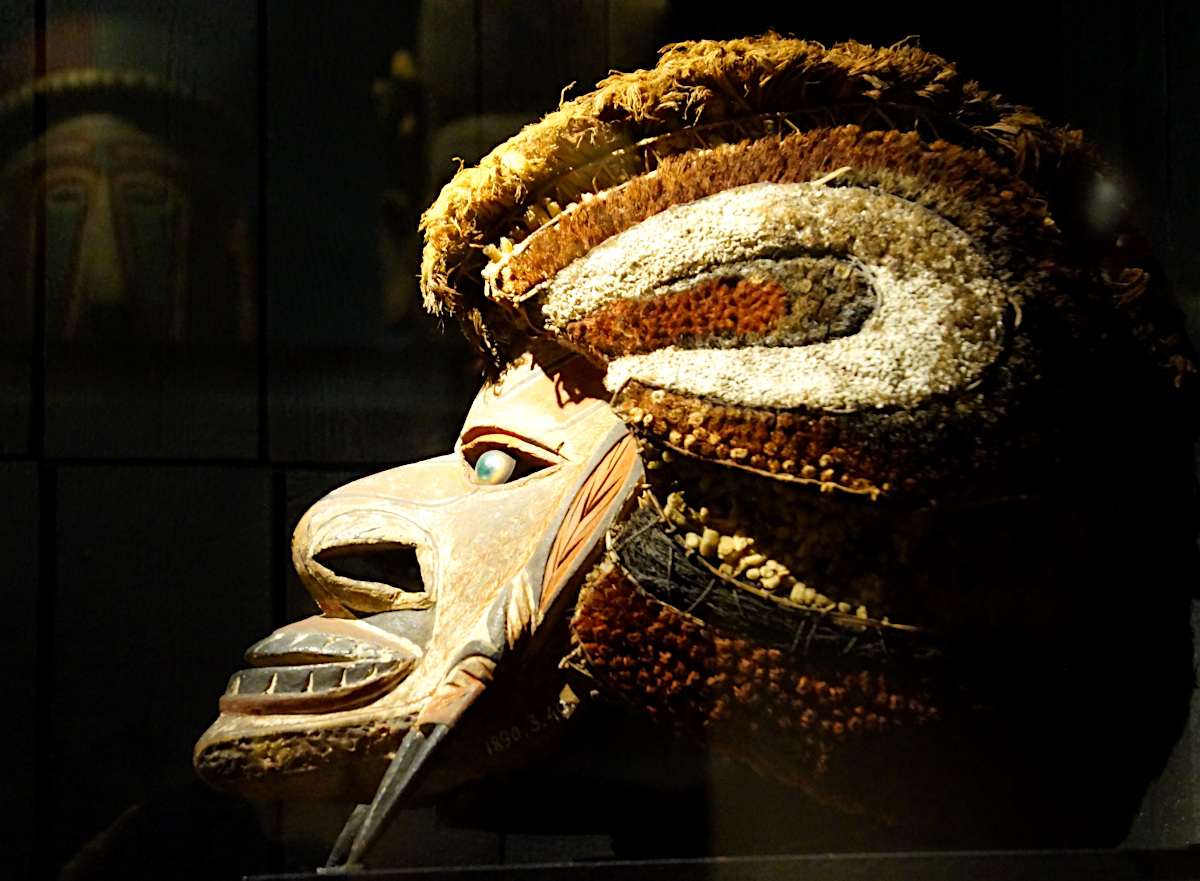 And you can see my fascination with these masks, as the photo to the right is another one of these Tatanua masks. This one came to the museum collection in 1890 by Fredrik Robert Martin, orientalist, art collector, art scientist. Noteworthy are the eyes of the masks; they look very real and sometimes rather scary. This is quite typical for the Tatanua masks, where the eyes often are made from part (Operculum) of the seashell 'Turbo petholatus'. 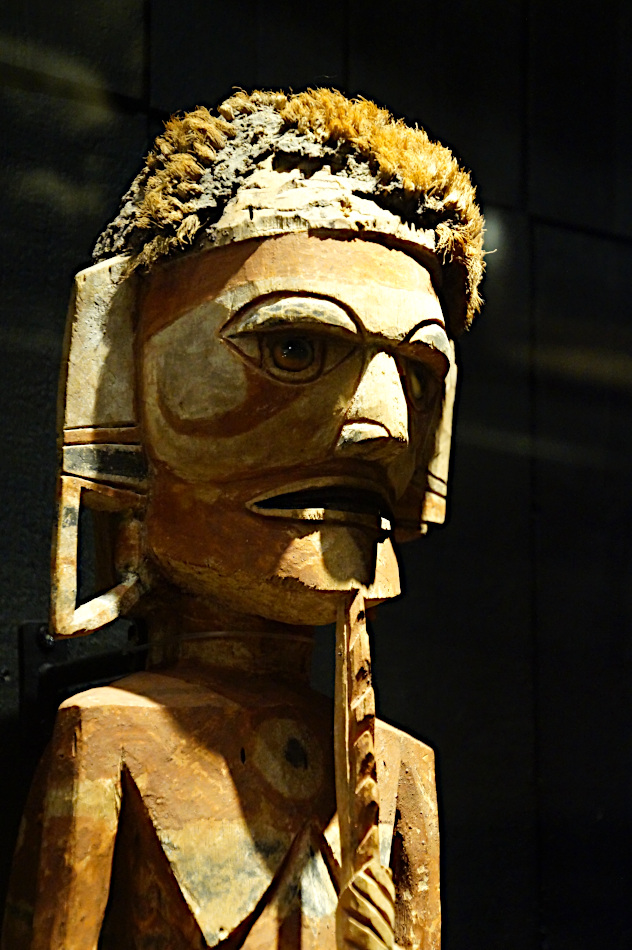 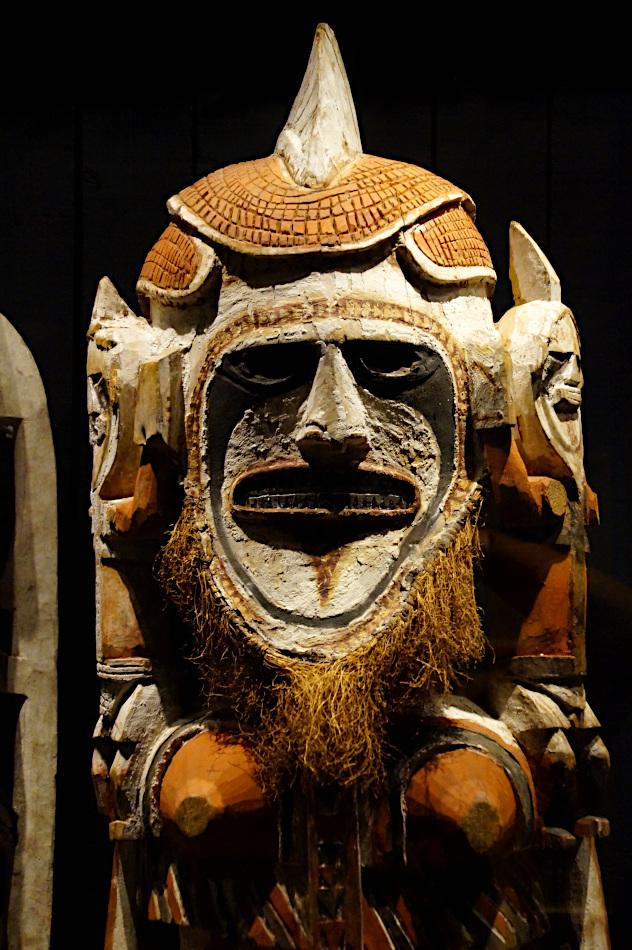 Above are photos of two statues, also included in the same collection of the Malanggan traditions from Papua New Guinea. They are full-size statues, although the photo only shows the top part. I wish I could give you a 3D impression of especially the statue on the right. As on the side of this statue, on each shoulder, sits a male full figure (painted in red, white and black) with arms outstretched. Both statues are quite impressive, the one on the left being 75 cm in height and the one on the right being no less than 130 cm.

The Kingdom of Benin 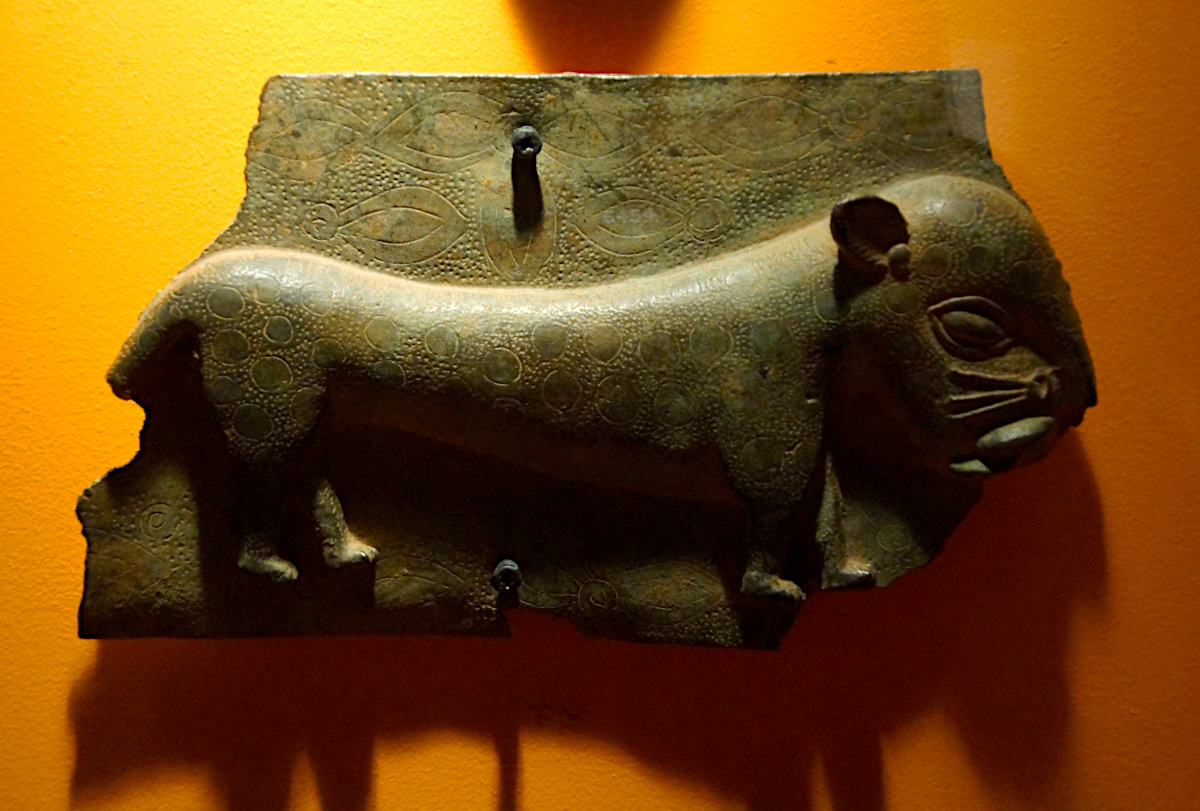 Let's move on and go to a totally different part of the world, Africa to be exact, and the Benin exhibition; one of my absolute favourites in the Etnografiska. The exhibition has been here for a very long time, already during my first visit in 2006 and it is still here in September 2019. But totally understandable, as it is as said, one of my favourite parts of the museum and has some fascinating objects.

In the photo above you can see a bronze plaque showing a leopard, Benin City, Nigeria, 1650 -1600. The leopard is Benin's main symbol of the royal power (the leopard is seen as king in the animal kingdom). Besides this plaque I also admired a small bronze statue of a leopard, with the same type of circles as decorations on it.

The Kingdom of Benin is located in the tropical rainforest of southern Nigeria. The majority of its population is known as Edo, but also groups of Ibo, Ijaw, Yoruba and Itsekiri live within the borders of the kingdom. The heart of the kingdom is its capital, formerly called Edo, but today it is called Benin City.

The Royal Palace was the site of one of the most fascinating art forms in Benin: rectangular bronze panels with reliefs of people and events in ceremonial life at the court. About 900 such relief tablets are still in the world today and are said to have been nailed in ancient Benin to the roof-bearing pillars of the palace, where they formed an impressive foundation for the court ceremonies they partly reflect. 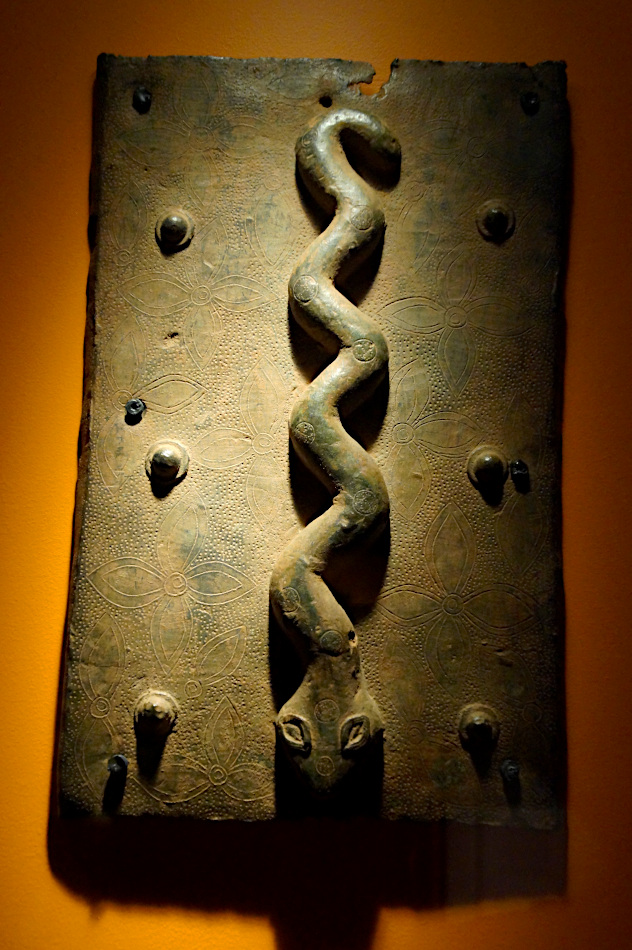 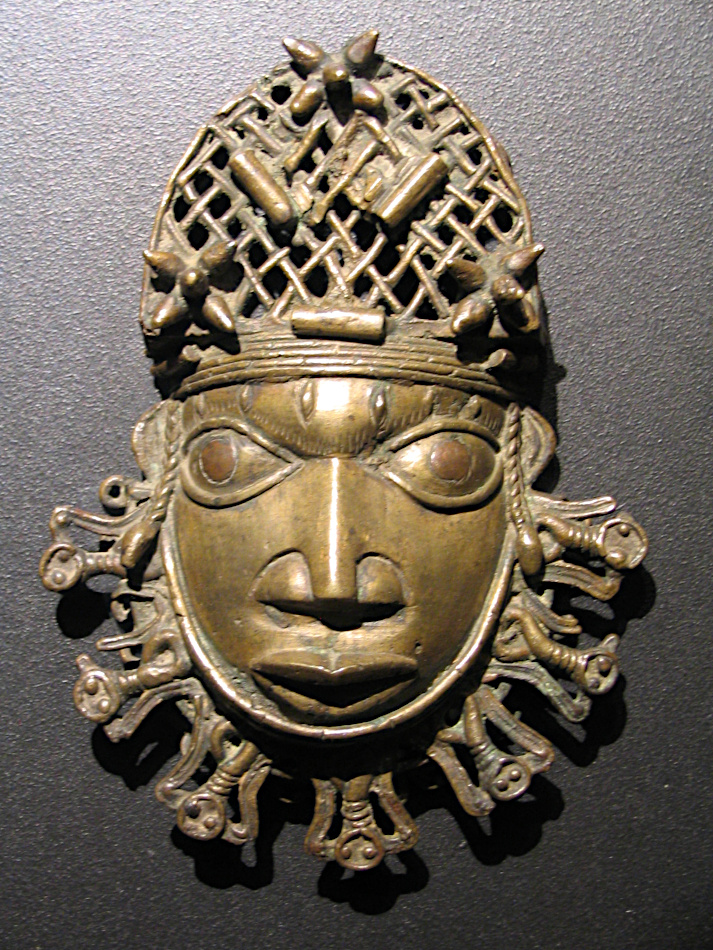 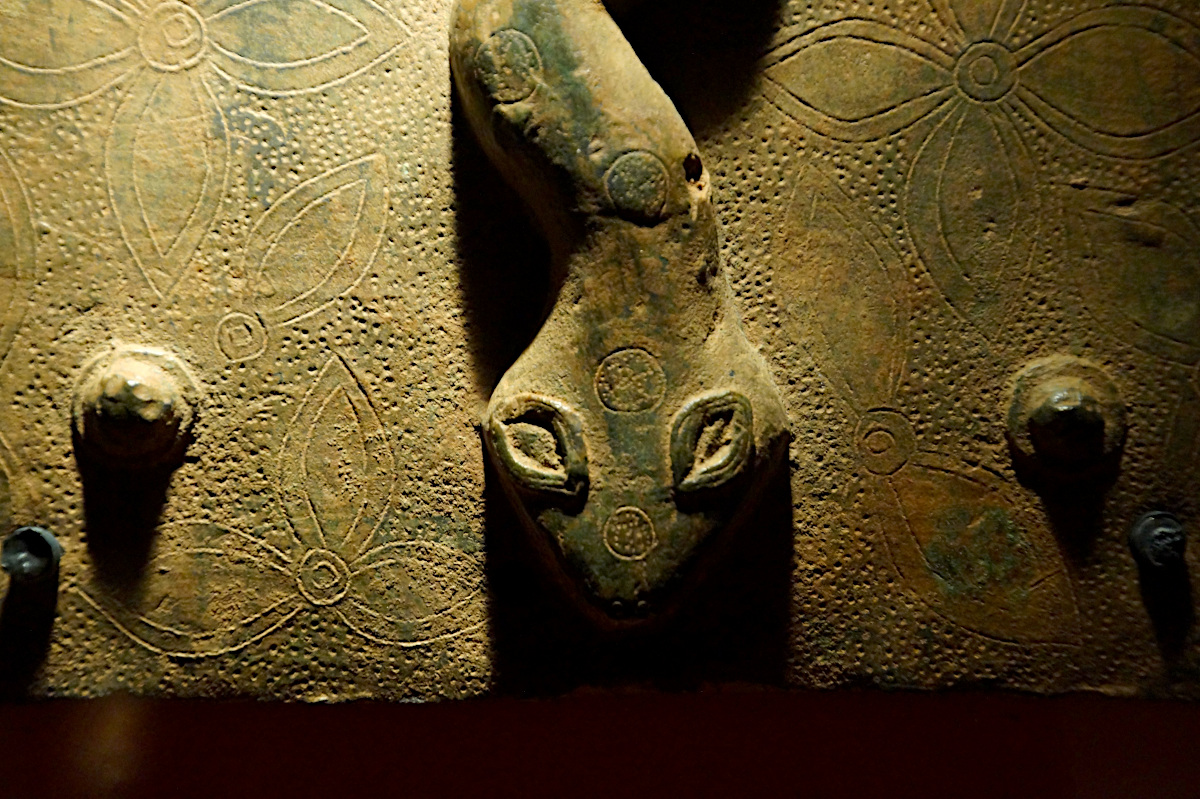 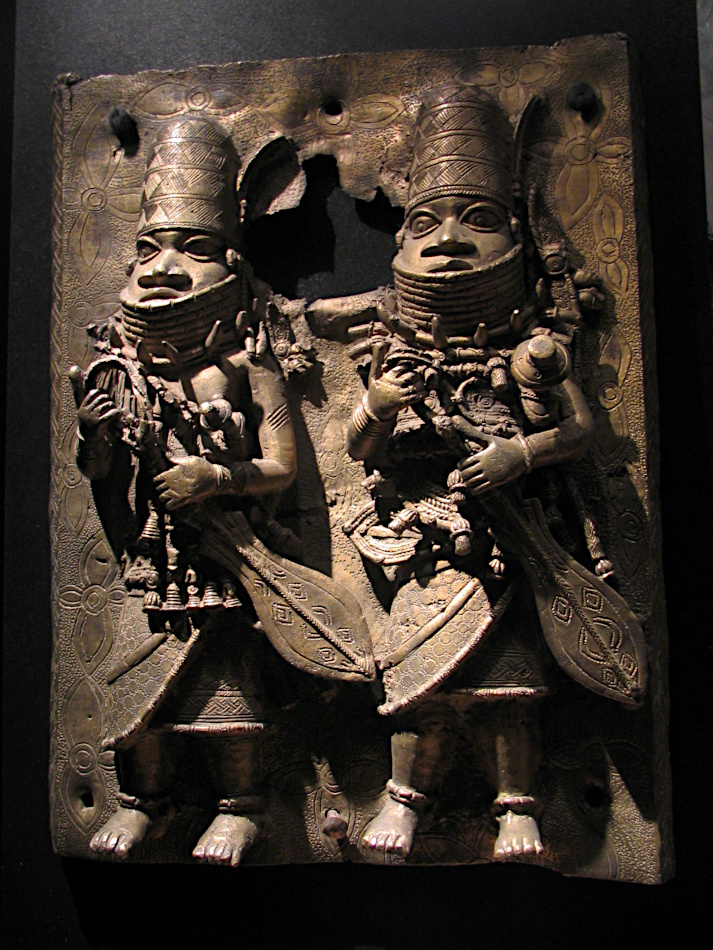 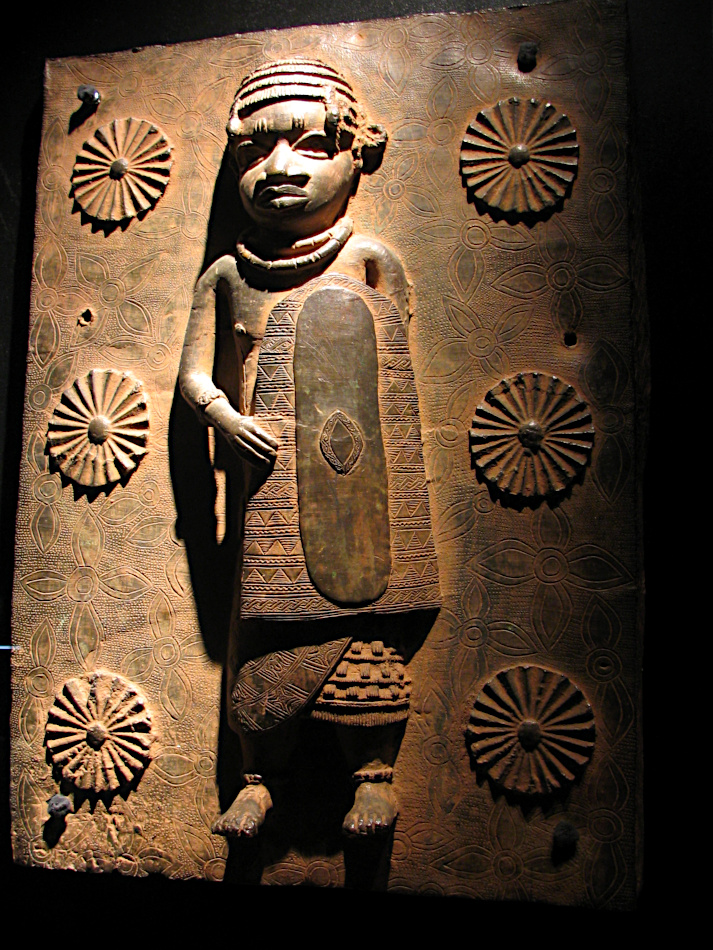 Palace guard, equipped with a shield, keeping watch over the main entrance to the royal palace. Early 17th century. 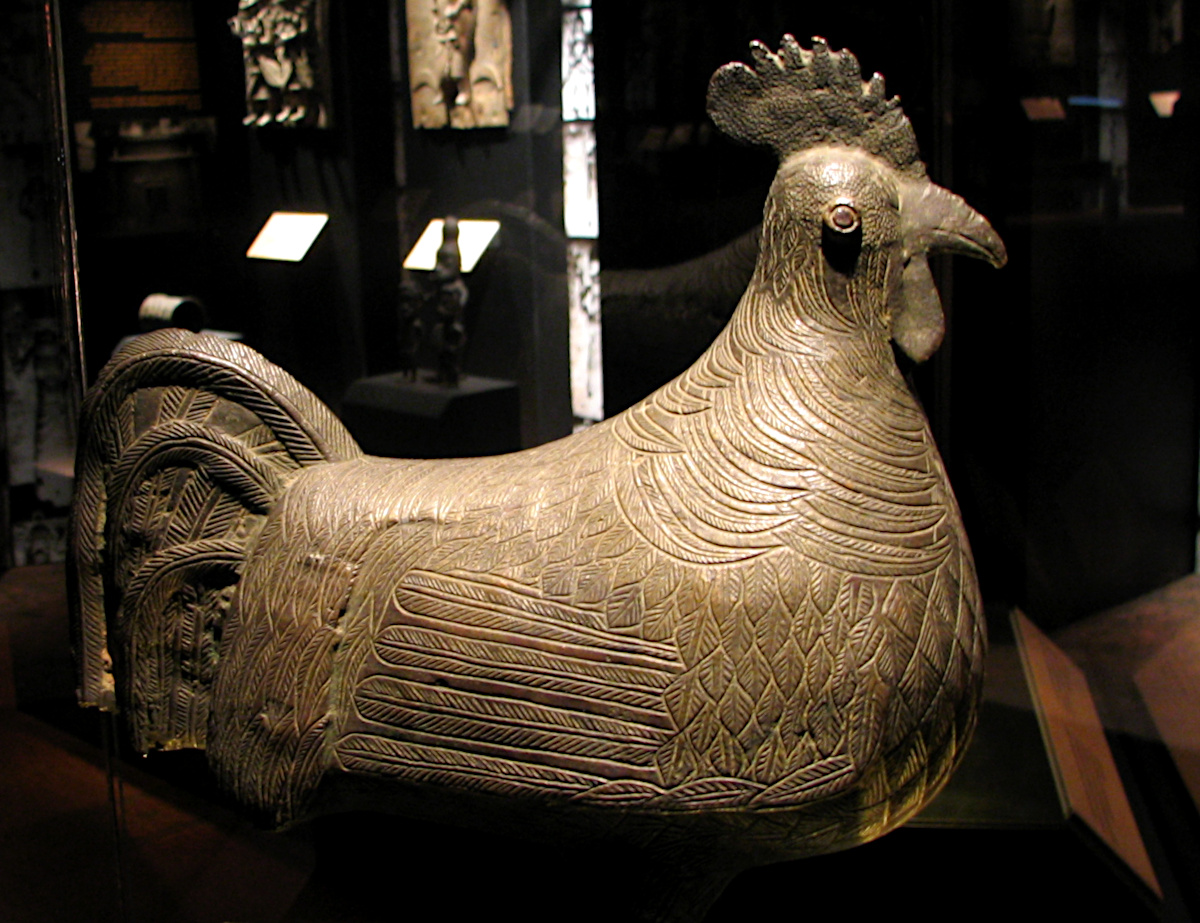 Brass roosters are placed on ancestral altars commemorating the Queen Mothers of Benin. The rooster is in court circles considered a symbol for the senior wife of the Oba. 18th century. 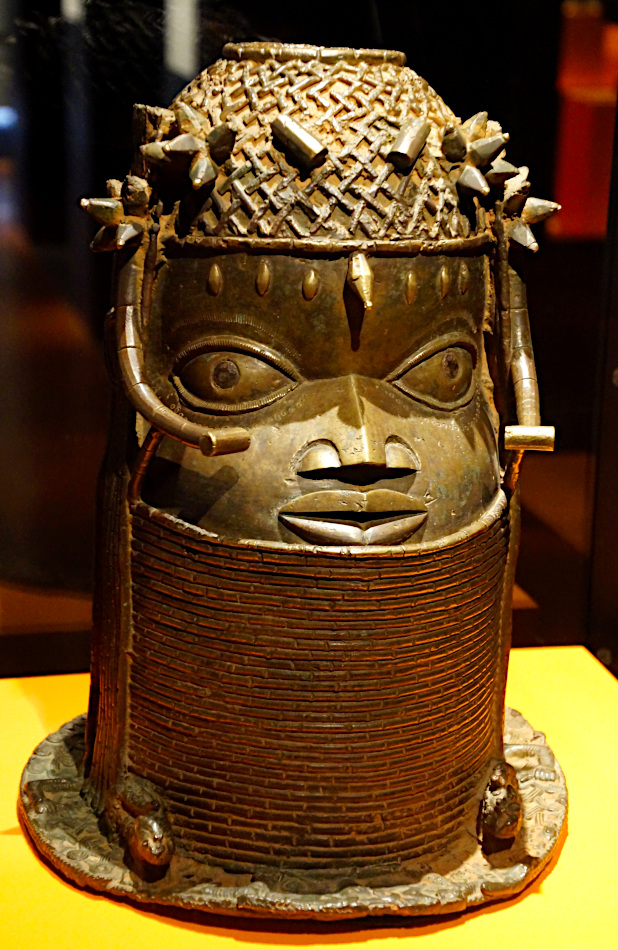 Benin: Commemorative head of an Oba 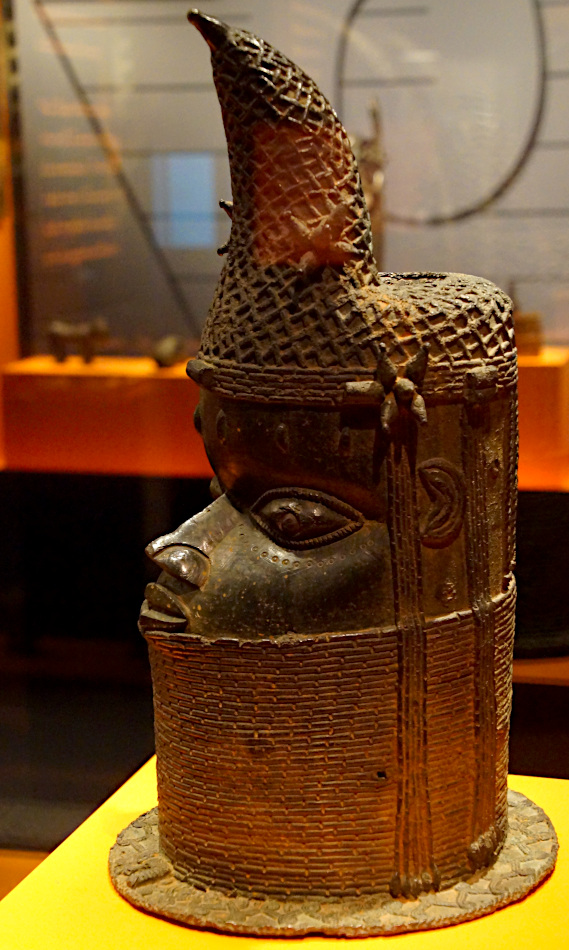 I found these brass heads (photos above) in the Benin exhibition absolutely fascinating. They are commemorative heads which were placed on a royal altar. On the left you can see Oba. The Oba of Benin is the traditional ruler and the custodian of the culture of the Edo people. The eyes are placed somewhat asymmetrically and seem to be looking in different directions, and one wonders if this is to show that nothing escapes the Oba. The pupils of the eyes are of iron. The coral collar consists of 32 rings. The head may have been fitted with wings, which these type of commemorative heads usually have.

On the right is the commemorative head of an Iyoba (Queen mother), cast in brass for an ancestral altar in the palace of the ruling Queen Mother. It dates back to the 19th century. 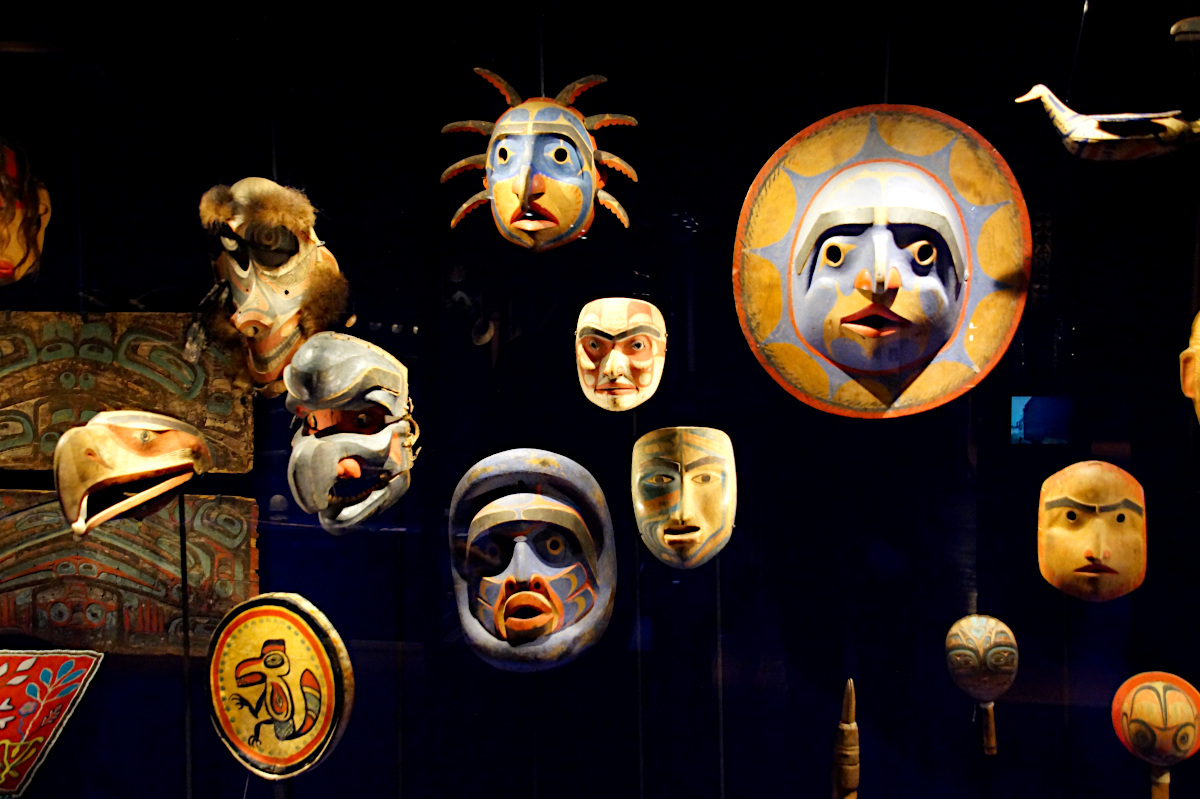 the exhibition of the indigenous people along America's northwest coast 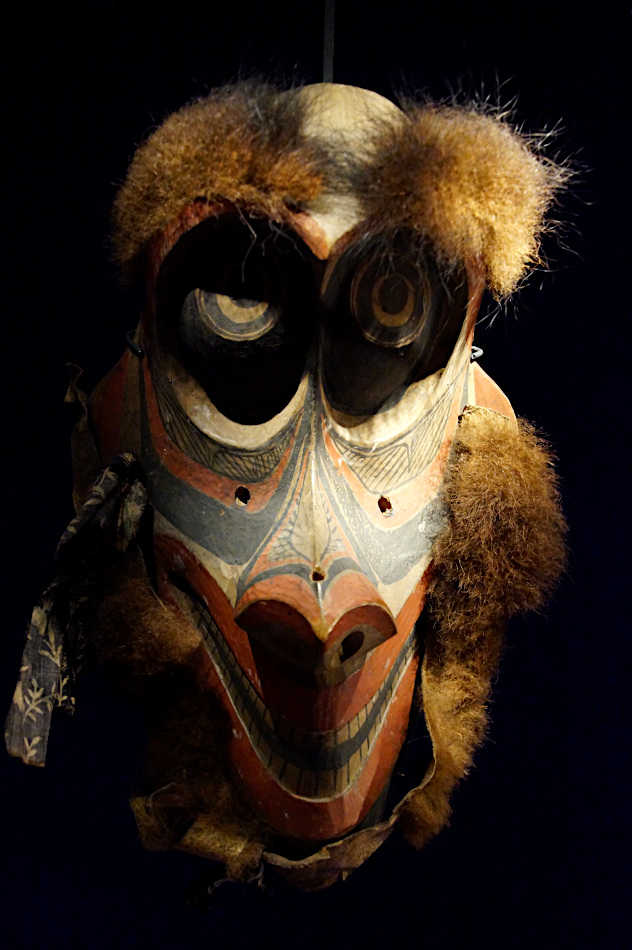 And we jump once more to a totally different continent, this time we travel to North America. A real surprise to me, and in a very positive way, was the exhibition of the indigenous people along America's northwest coast.

The rich nature of America's northwest coast produced plentyfull of food. And it this environment, people were given time to create crafts and arts of various kinds. They made blankets, canoes, boxes, spoons, masks and totem poles, which were incredibly beautiful and skilfully executed. And in this exhibition the museum shows its collections. And of course my eyes were immidiately drawn to the skillfully and full of fantasy made dance masks. (photo above)

Photo right: Large mask (40 cm) carved in wood, depicting a monkey head, with painting in red and black. It was used for festivities and originally comes from Haida Gwaii, British Columbia, Canada.

Photo below right: Is a unique and a rather macabre mask from the early 19th century, or the late 18th century. It is a 'Kallhoksua' mask and it 'tempts the cannibal to eat itself'. (and please note the look of horror I have now, eeks!). As said this mask is very unique, no similar version has been found. The nose ends in a hook and the nostrils are greatly exaggerated. This style and facial expression is typical of region of Bella Bella in British Columbia.

Photo below left: Despite the big smile of the mask, this is another creepy one and also very unusual. It is a 'Bek bek koall a nusa' and it 'attracts people to bite pieces out of their arms'. (and yes, another eeks from me, and that same look of horror!). This mask is probably the very cannibal spirit bakhbakwalanooksiwey, although not in its typical raven form. The style of the eyes is typical of kwakiutl. The two stylized skulls on top of the mask are also typical of the kwaki style. It is probably from the early 19th century or late 18th century, and in other words very old. And like the other mask also from the Bella Bella area in British Columbia. 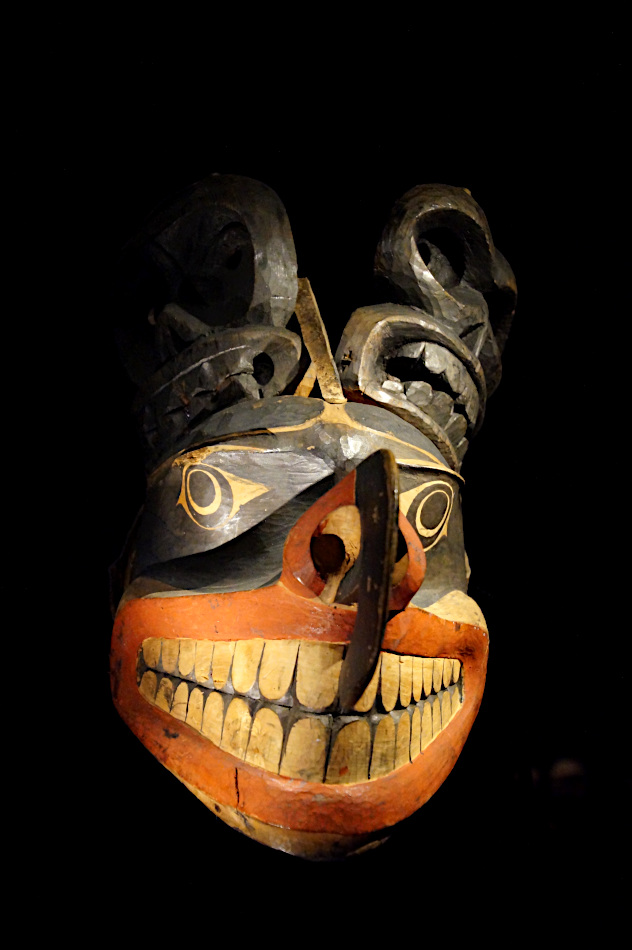 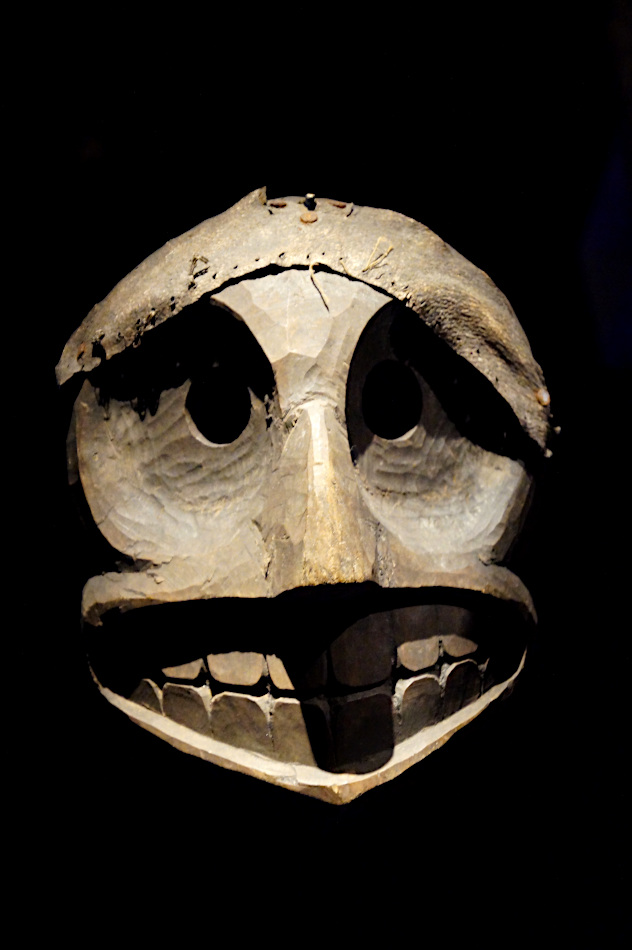 Below are some further random impressions from the Etnografiska museum 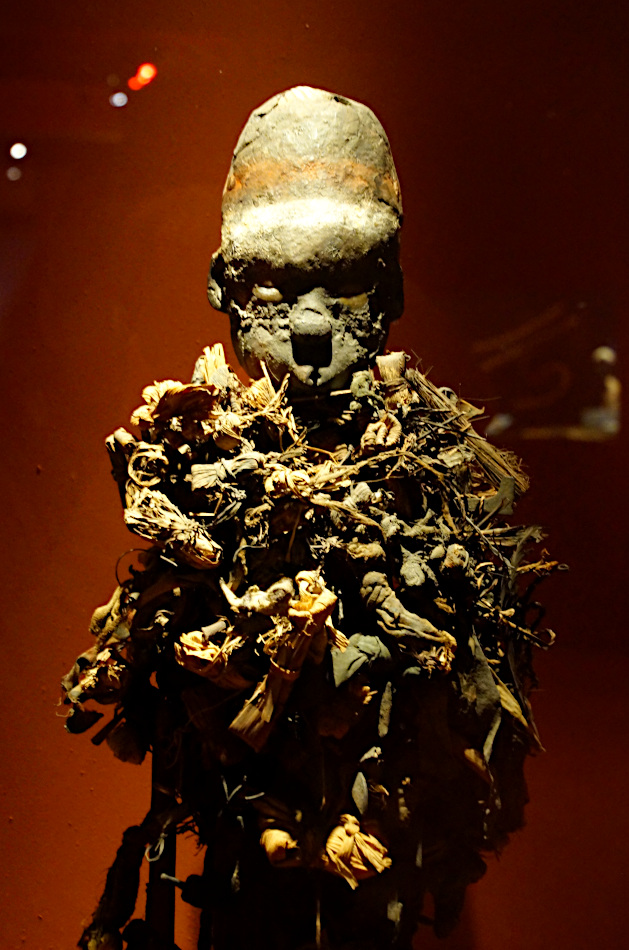 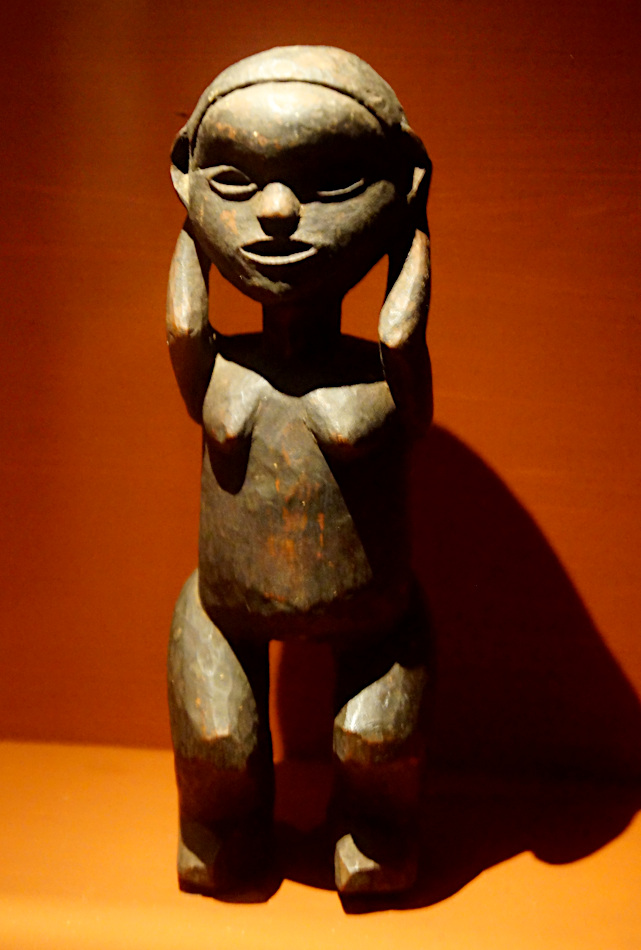 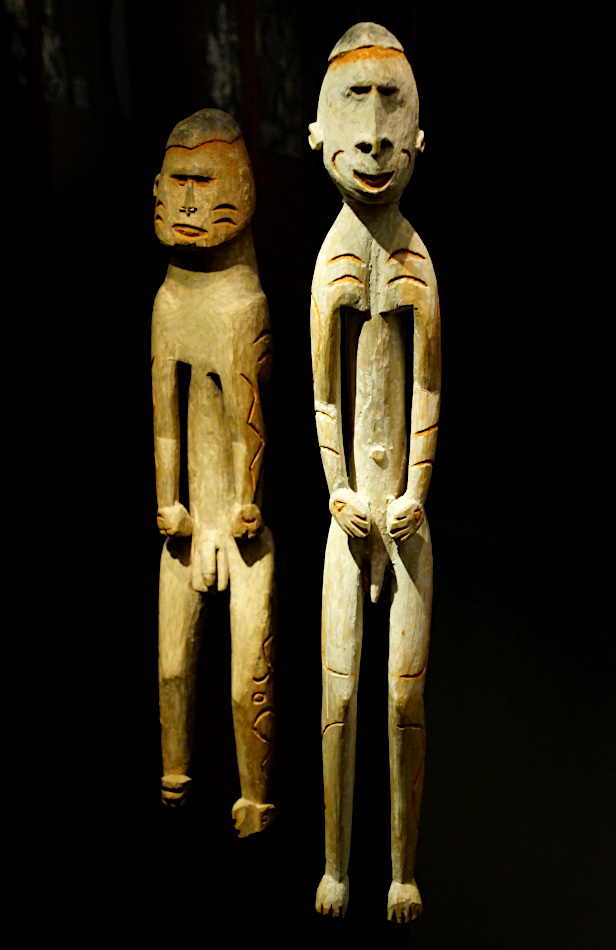 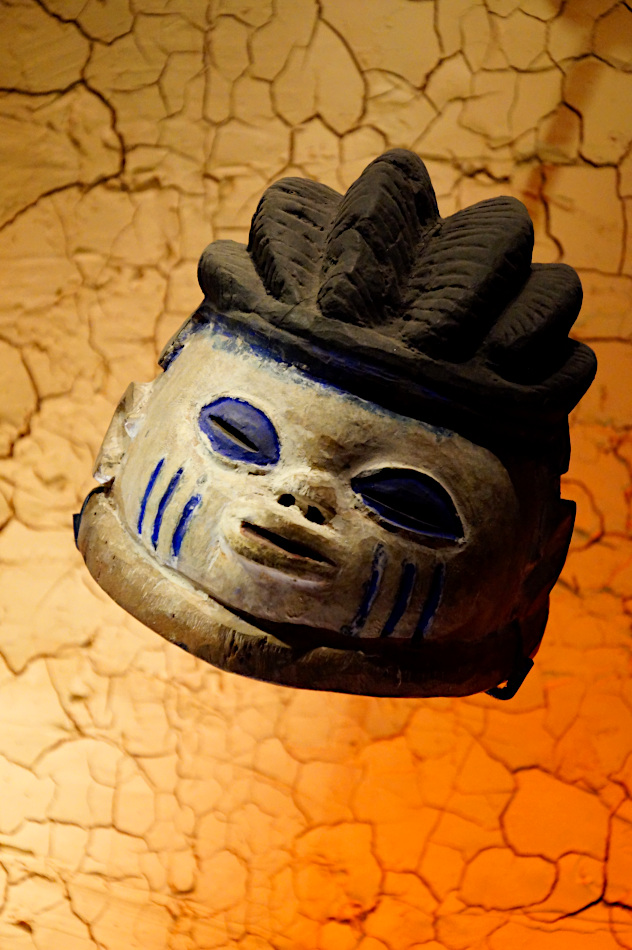 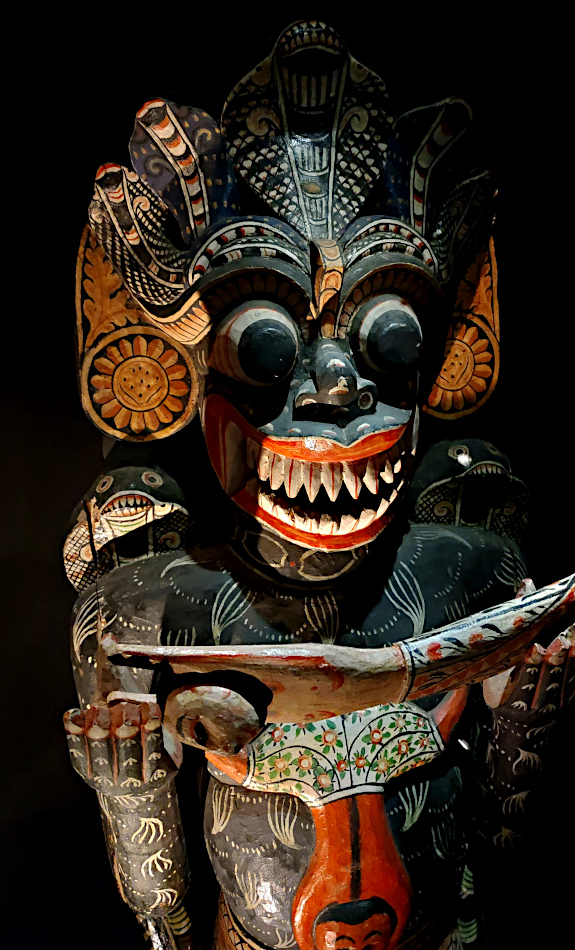 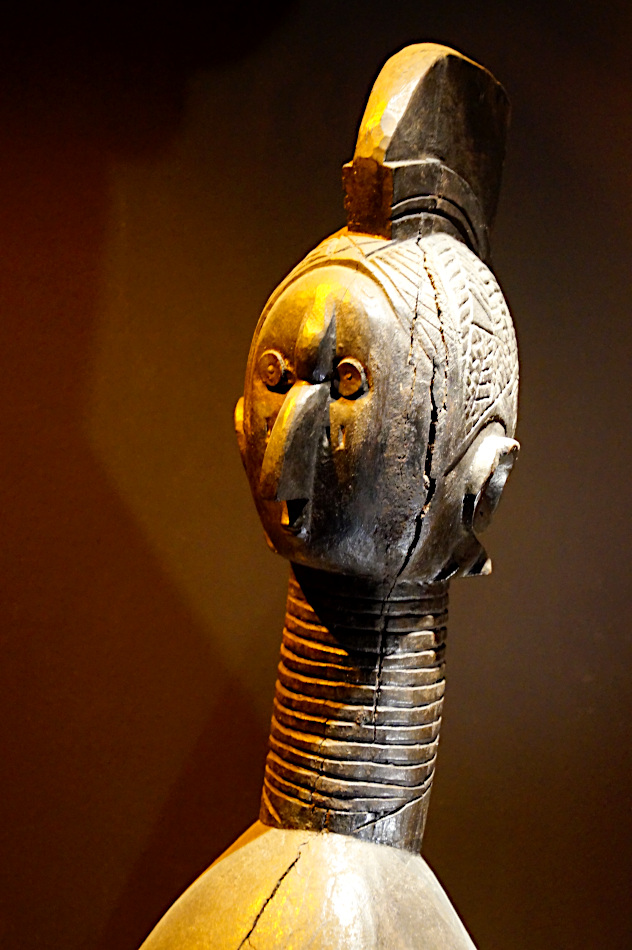 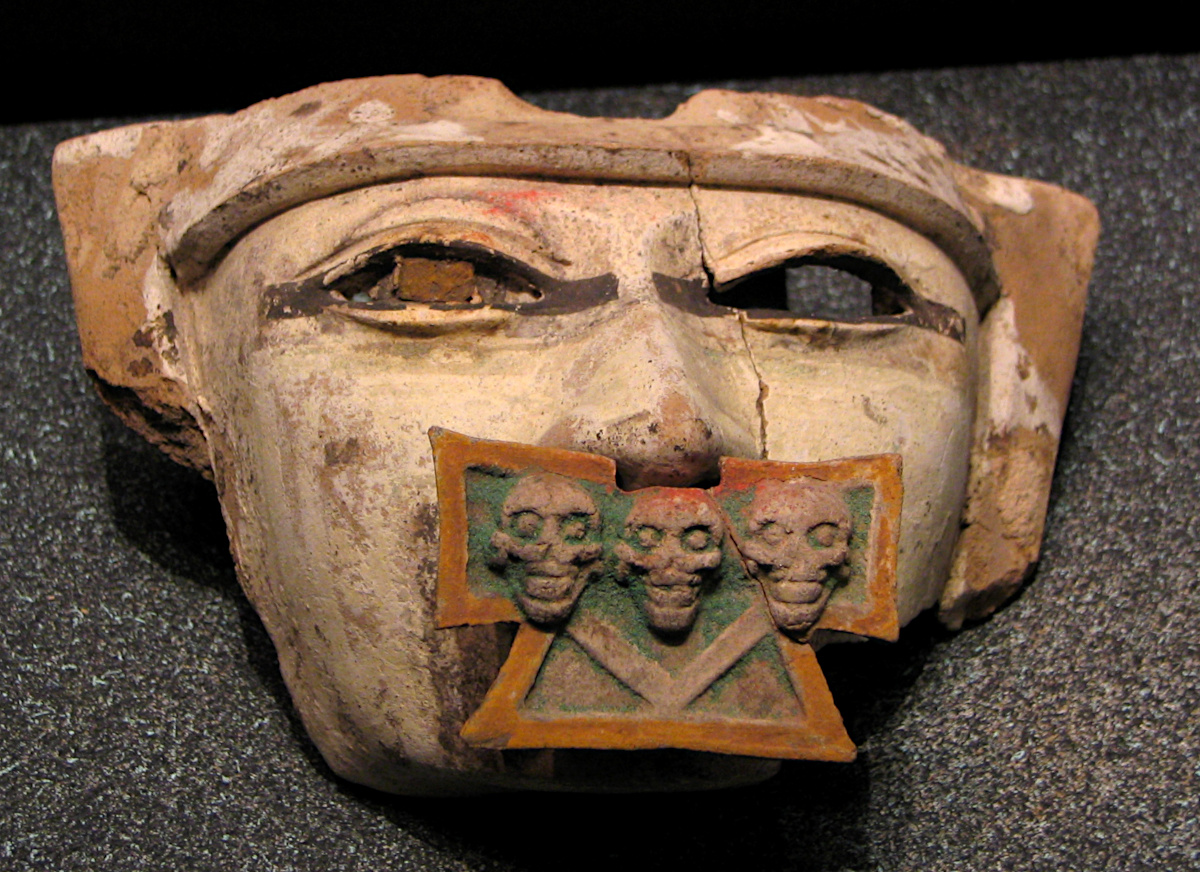 The Museum of Ethnography is beautifully situated in Museiparken (the Museum Park) at Gärdet, north Djurgården in Stockholm. The Etnografiska museet (Museum of Ethnography) is located next to the Tekniska Museet (Museum of Science and Technology) and the Sjöhistoriska museet (National Maritime Museum). This museum seems to be the smallest of the three, but there is enough to see here to keep you busy for at least an hour or probably much more.

We decided to walk to the museum from the Central Station. To be honest, it is quite a long walk! But an enjoyable one, especially on a nice sunny day, walkin along the waterside Djurgårdsbrunnsviken until you come to the Etnografiska museet. Of course you can take public transport as well, By bus: Route 69 towards Blockhusudden or Kaknästornet. Bus stop 'Museiparken'.

And as you can see, you are allowed to take photos in the museum, as long as you do not use any flash, or tripod. Taking photos isn't always the easiest however, as it is rather dark inside, and there are many lights reflecting in the displays. So bring a steady hand, and maybe some patience to find a good angle to avoid those unwanted reflections :-)

You can reach me by sending me an Email.

Or leave a comment / reaction in the box below.