In and around Stockholm, Sweden 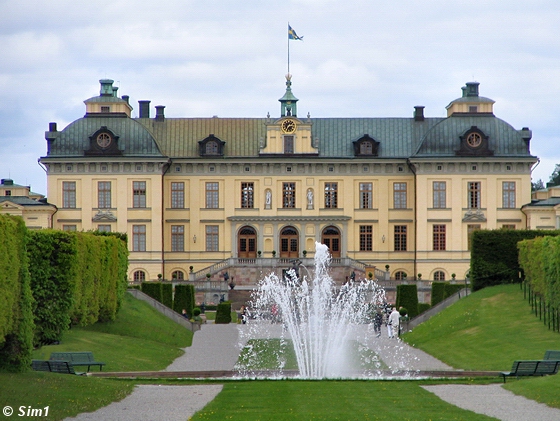 As Drottningholm is located so close to Stockholm it has become a popular site to visit. The Palace and its grounds are on the UNESCO´s World Heritage list, which probably draws in even more people. But despite being such a major attraction, I thought it was still relatively calm and nice to visit. There is quite a lot to see and do here, so let's not waste any more time.... time to explore Drottningholm! 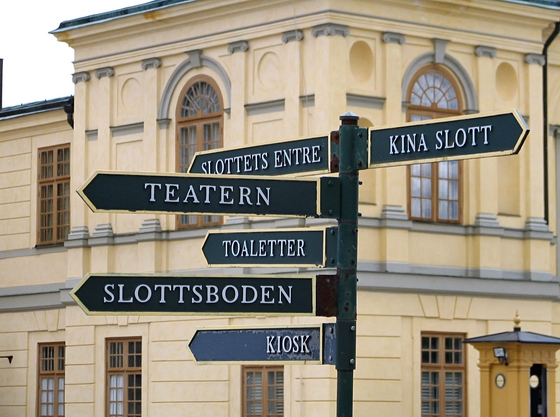 Drottningholm is not only a palace, it has lots more to offer. You can see the changing of the guards, visit one of the best preserved baroque theatres in Europe, walk through the formal gardens, be surprised by the strange looking Guards' Tent or, and this is my personal favourite, visit Kina Slott!

There are a view more things to see, like Museum De Vries and Drottningholm Palace Chapel. I personally didn't visit these, but you can find more info about them on the Royal Palaces website 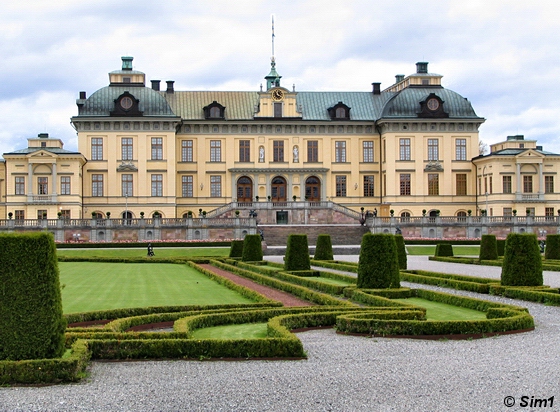 Drottningholm is often called the "Versailles of the North" and when you look at the photos you can understand why. The architect Nicodemus Tessin the Elder (and later Nicodemus Tessin the Younger, who completed the work) was clearly inspired by the famous French palace. But when you get a bit closer to the palace and walk around in the gardens, you will notice the clear differences between the two.

Undoubtedly Drottningholm is a nice palace, but it clearly misses the grandeur of Versailles. The gardens and the interiors are nothing in comparison to Versailles when it comes to decorations and details. So don't expect to see a "Versailles" in Stockholm, because then you will go home very disappointed. 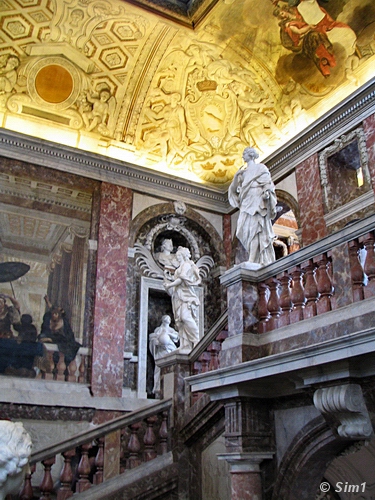 A good way to look around inside the palace is by taking a guided tour. During the summertime a guided tour is no problem, but off-season they are only available during the weekends. So take that into account when planning your visit.

In the photo you can see the entrance / stairways of the palace. 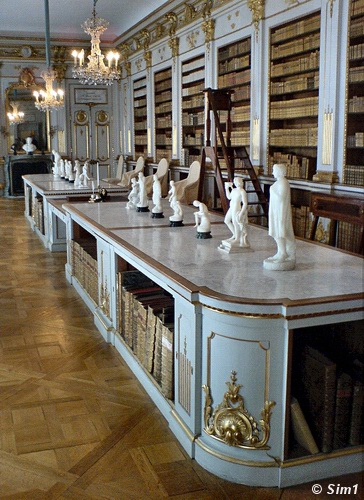 The interior of the palace is in early Baroque style of the 1660s and 1670s. Rooms not to be missed are the beautiful staircase (see previous photo), the Ehrenstrahl Drawing Room and the Hedvig Eleonora's State Bedchamber. The room I liked best of all though is the library (see photo).

The library is the creation of Princess Lovisa Ulrika of Prussia. Lovisa Ulrika had quite a few interesting collections, which made Drottningholm a popular spot for leading scientists of that time to visit. Carl von Linné (Carl Linnaeus) for example worked here, cataloging the royal collections' "natural objects". Carl von Linné is a famous biologist, and is often called is often called the "Father of Taxonomy". His system for naming, ranking, and classifying organisms is still in wide use today. 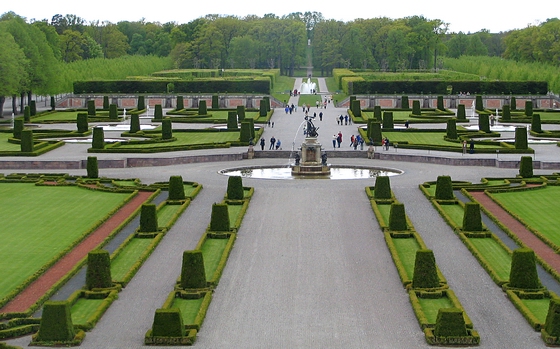 From the windows at the top of the stairs you have a good view over the formal gardens of Drottningholm. The view over the garden is actually the only place where you are allowed to take photos inside Drottningholm. These formal gardens are the oldest in the series of three garden styles at the palace. They date back to the 17th century and were laid out here by Queen Hedvig Eleonora (who also had the palace built).This formal garden is called the Baroque Garden and is directly adjoined to the Palace. The garden has very strict lines, dominated by box-hedges and stripes of crushed brick of black granite. It is divided into four different section, but they all have the same formal and strict feel to it. There is no flower in sight though! Just lawns, hedges, statues, some fountains and 'manicured' trees. For me these gardens were a huge disappointment as I had hoped for so much more. The cold 'feel' of this particular garden and the lack of a real 'highlight' is just not my cup of tea.

Beside the formal garden there are two more gardens, which in my opinion are a bit more attractive. The one surrounding the Chinese Pavilion is from the mid 18th century and it is a blend between the strict ideal garden design and a more natural kind of park. The third is a real English natural landscape garden.

As you can see the garden really disappointed me, partly due to my high expectations and memories of the formal gardens at Versailles (which I loved). The good news though is that the gardens are for free! And the English garden seems perfect for a nice stroll and as a picknick spot! There are two ponds located in this garden and some beautiful big lawns. Unfortunately I didn't have my picknick basket with me, otherwise I would have tried it out for you ;-) 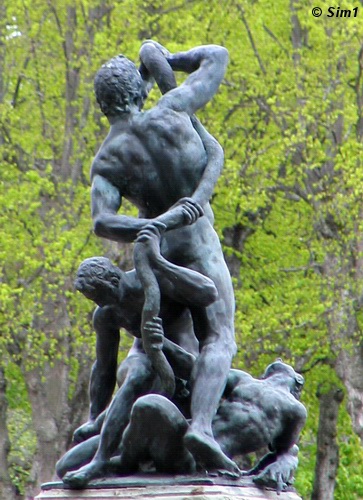 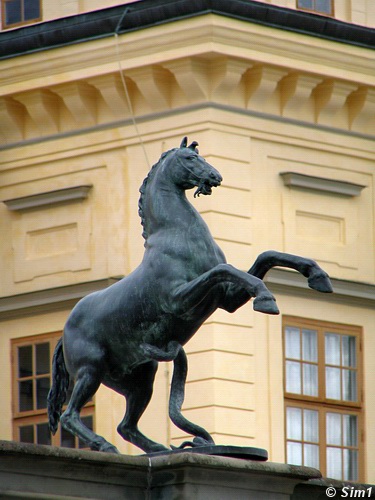 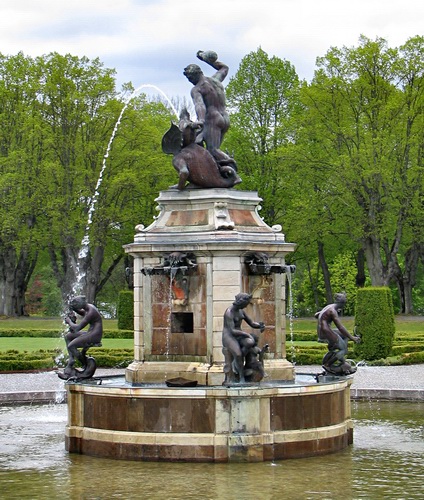 Inside the formal gardens there are quite a few statues, of which you can see one in the photo. Unfortunately I couldn't get close as most of this area was fenced off. In the centre of the "Embroidery Parterre", which is the formal garden nearest to the Palace, you can see the Hercules Fountain (photo right). This fountain has bronze figures by the sculptor Adriaen de Vries and dominates this part of the garden.

All the bronzes in the formal garden are by Dutch sculptor Adriaen de Vries (1556-1626). Today these sculptures have been replaced by modern bronze casts and the originals can be seen at the Museum De Vries. The statues were brought to Sweden as trophies of war from Prague in 1648 and also from Fredriksborg, Denmark in 1659. I really enjoyed watching the bronzes in the garden, I only wish I could have gotten a little bit closer to see them a bit more clearly. 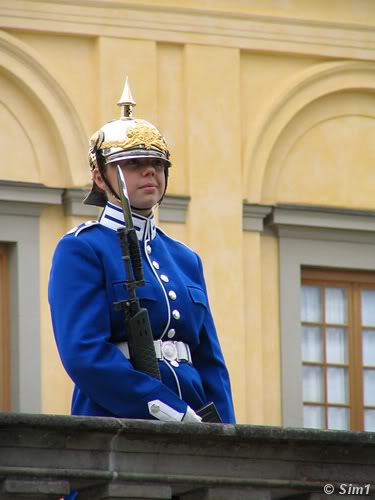 I didn't wait to watch it myself as a guided tour of the palace started at 12 as well (bad timing in my opinion to let the two start at the same time). I watched the changing of the guards in the city centre quite a few times and it is fun to see. Unlike in some other countries the guards are allowed to move, smile and talk to the general public. Maybe surprising to some, but it is also normal to have woman standing guard. Quite refreshing in my opinion :-) 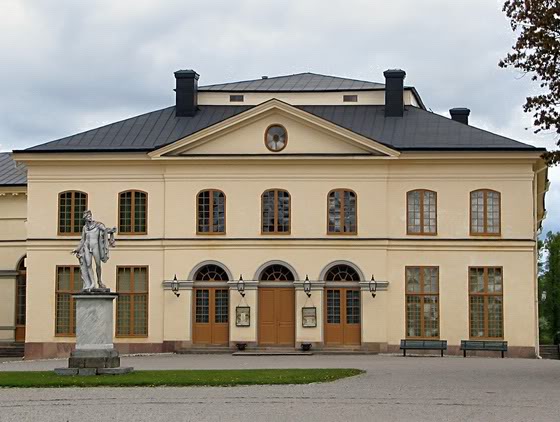 Directly beside the Palace you can see the The Drottningholm Palace Theatre, or in Swedish called "Drottningholms Slottsteater". The Slottsteater is an opera house from 1766. Nowadays it is run by a private foundation, but you can visit it and it is even in function as a real theatre! I would love to go here to watch a theatre play some day, but it is quite hard as tickets are sold out quickly.

Beside the formal garden there are two more gardens, which in my opinion are a bit more attractive. The one surrounding the Chinese Pavilion is from the mid 18th century and it is a blend between the strict ideal garden design and a more natural kind of park. The third is a real English natural landscape garden.

What makes this theatre so special is that it is still the way it used to be centuries ago. Quite a sad history caused it to be like this: The theatre was built for Gustav III by his mother in 1766. Gustav III loved the theatre and therefore was often called the Theatre King (see next tip). In 1792 he was assassinated and his grieving mother Louisa Ulrika of Prussia decided to close up the theatre at Drottningholm. The theatre had been forgotten about for many generations but in 1920s it was rediscovered. Because the theatre had not been used or touched in so many years, almost all the original equipment is still there. 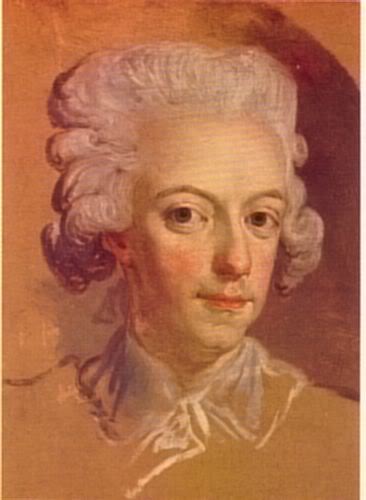 Drottningholm Theatre had its true period of greatness during the reign of Gustav III, but who was he? Gustav III (1746-1792),also called the theatre king, became king in 1771. After one year on the throne he made, with support of France, a coup d'tat to increase his power. He ruled despite his dictatorship in the name of "enlighten autocracy" and carried through many reforms. The most important was freedom of religion and the ban of torture. He also changed the law so that the number of crimes with the death penalty was decreased.

He was a big sponsor of cultural activity and built many theatres in his castles, i.e. Gripsholm and Drottningholm and also Haga Park. He started many academies like "Svenska Akademin" (now responsible for the Nobel prize in literature). He played in many theatre shows..... it is been said that he wasn't a good actor though :-)

He was assassinated by a group of people, when he was participating in a "Masquerade" at the Opera. The group was lead by Johan Anckarström who shot the king with a pistol. The king was hated by the nobility because of his reduction of their privileges and they were the "sponsor" of the murder. Gustav III died 13 days later from his wounds. Anckarström was beheaded one month later, the other in the group expelled from the country. 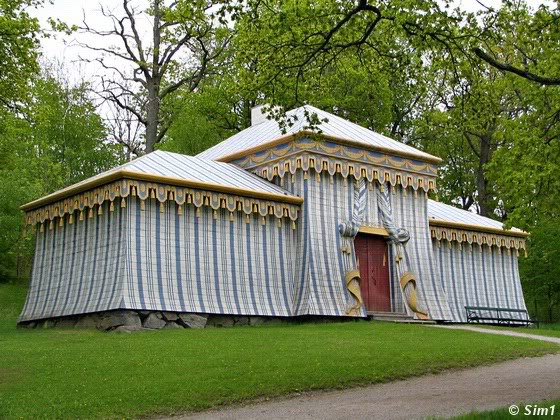 Let's move on and visit the Guards' Tent. You can't miss seeing it when walking through the garden from Drottningholm to Kina Slott (The Chinese Pavilion). This strange looking building used to be the quarters for the dragoons of Gustav III. It was built in 1781 and designed by C.F. Adelcrantz. The idea behind the building was to give it an exotic look and resemble a tent in a Turkish army camp.

Strange building you might think, but even more weird when you know that this tent building is not unique; there are actually more of these 'tents' in Stockholm! At Haga Park I saw three similar ones, build only a few years later (1787). These "tents" do make a bit more sense when you realize that they were build during the time of Gustav III, who is also called the theatre king. The tent buildings certainly have this dramatic and theaterical look to them that fits to Gustav III's love for the theatre.

If you visit at the right time of year you might even take a look inside. The Guards' Tent is open from mid June to mid August, daily 12.00 - 16.30. Inside is a little museum. Free admission. 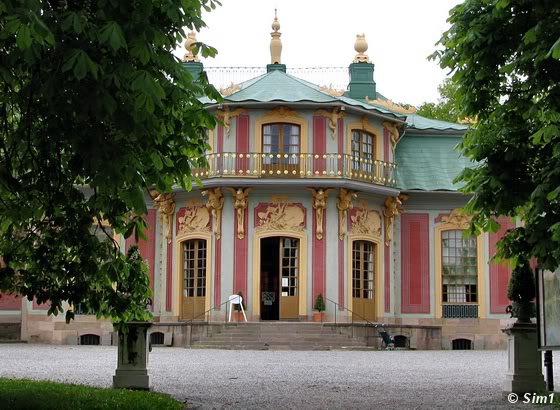