Summer 2020, and our original travel plans for this year have totally disappeared due to the Covid19 epidemic. But slowly a new travel plan developed to a destination that has been on our wishlist for quite some time: a visit to The High Coast of Sweden. A beautiful stretch of coastal landscape about 7 hours drive to the north of where we live, with a beautiful national park called Skuleskogen, and a unique area declared a UNESCO heritage site.

And one of the absolute surprises during our trip was a visit to the Barsta Chapel: from the outside quite modest, but on the inside.... wow! So unexpected and unique.

Barsta Chapel from the 1600s 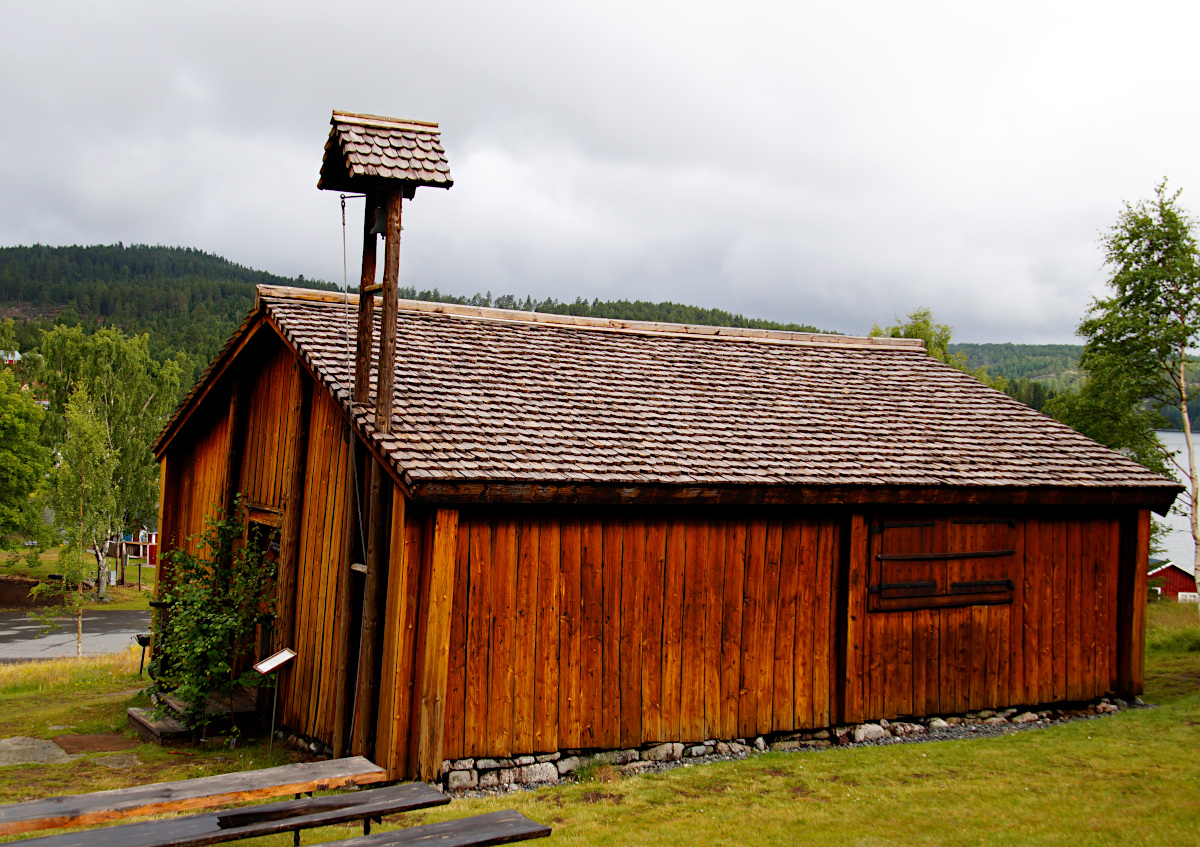 The rain is coming down softly in the fishing village of Barsta. It is a tiny village, located on a beautiful stretch of coast next to the "Rotsidan Nature Reserve". I read that there is an interesting little chapel located here, so despite the rain, we decided to head out to Barsta and have a look.

I have to admit that at first glance it is hard to grasp that this little brownish bland looking building is a chapel. And it is even more difficult to understand why this chapel is worth visiting! The only thing giving away that this is a chapel is the church bell on the side of the roof.

We hurry up the hill, trying to avoid as much of the rain as we can. But when we stand in front of the low entrance door, it is locked. Oh no, we have driven all this way for nothing?! 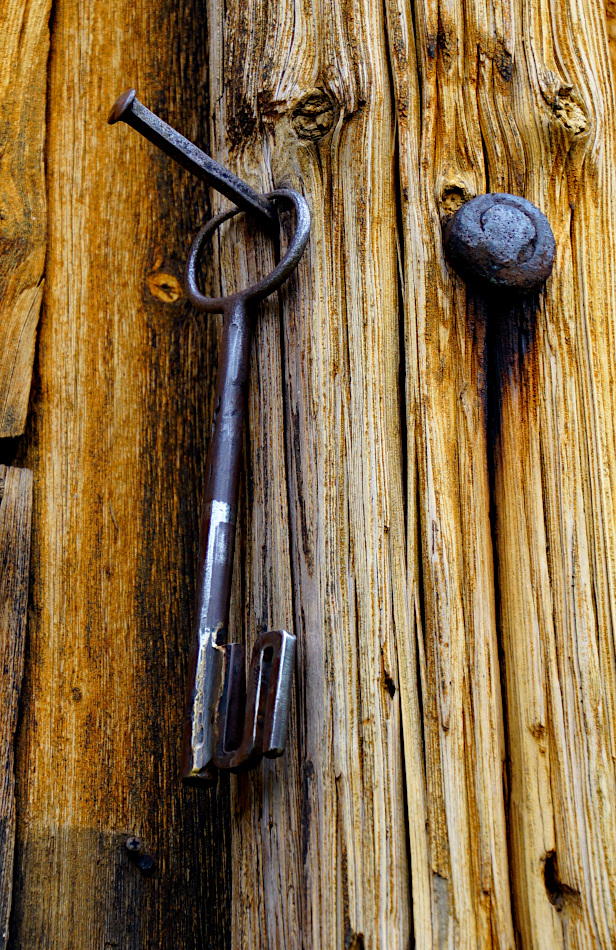 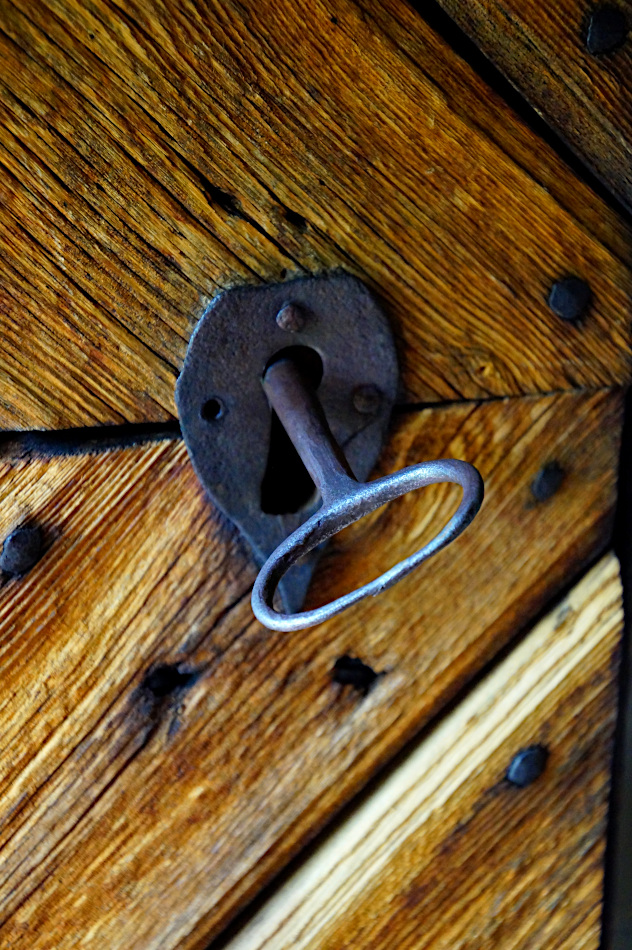 But then we suddenly notice that a large metal key is hanging on an old rough nail on the right side of the door. We turn the key in the old lock and the door opens with a creaking sound and daylight flows into the small chapel. And immediately I am thrown several hundred years back in time..... 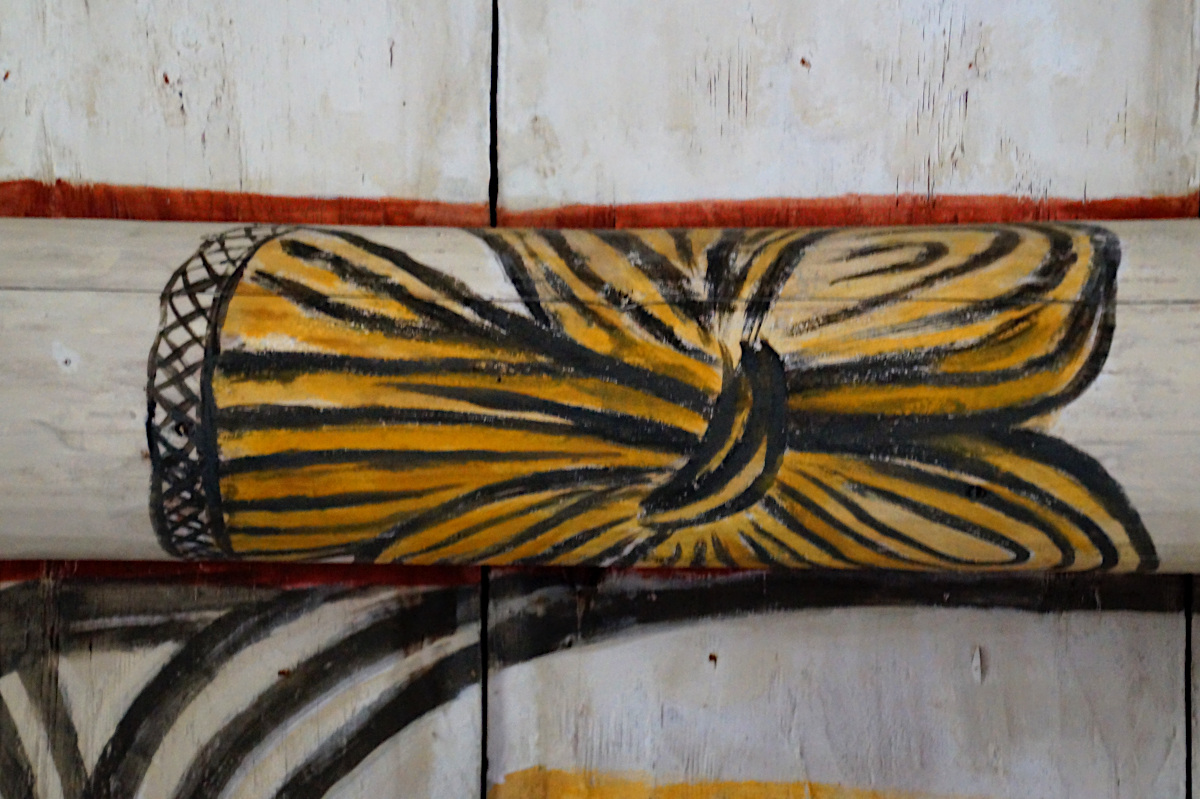 Here time has stood still since 1699. Literally nothing has changed in Barsta chapel since then, except for a couple of windows that have been replaced in the 19th century. So the chapel looks quite like how it was in the year 1699. 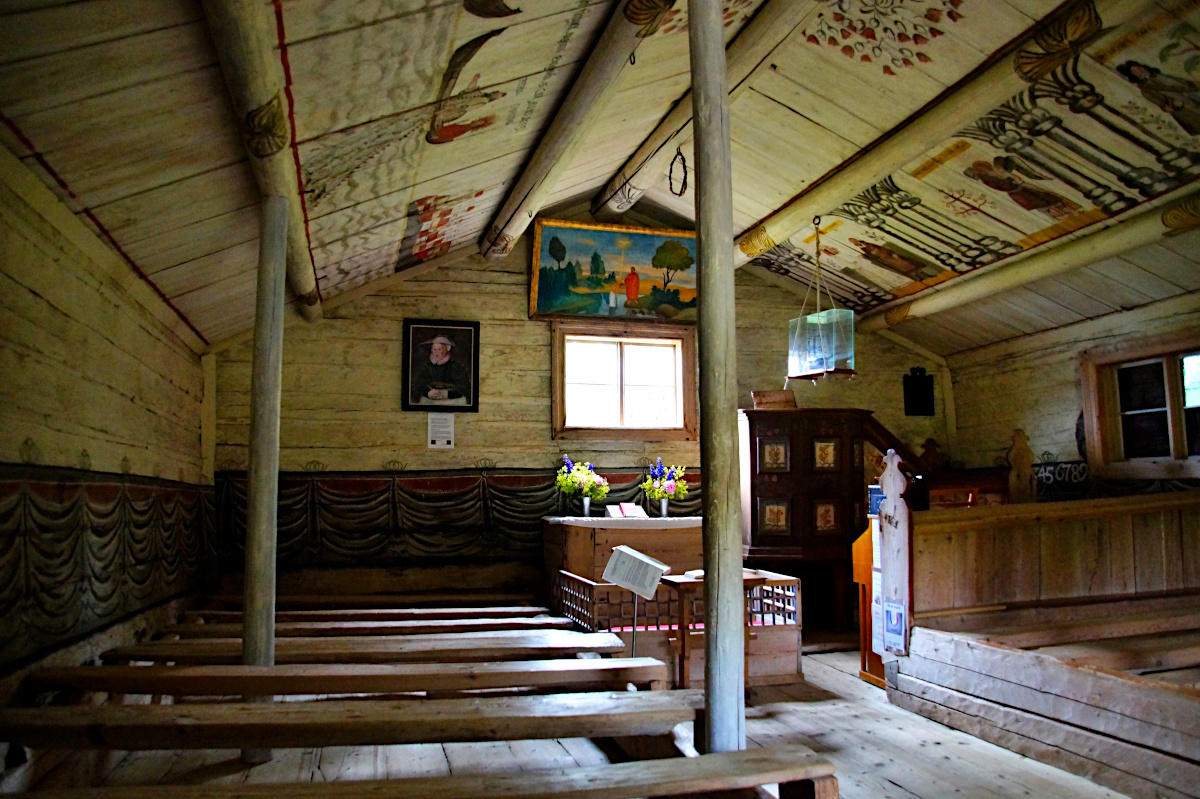 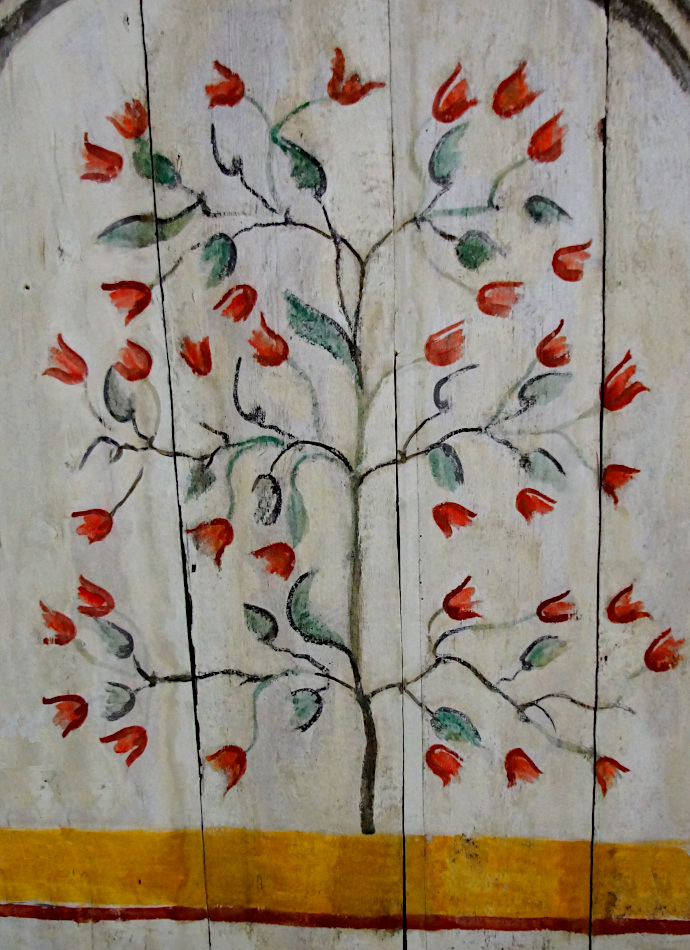 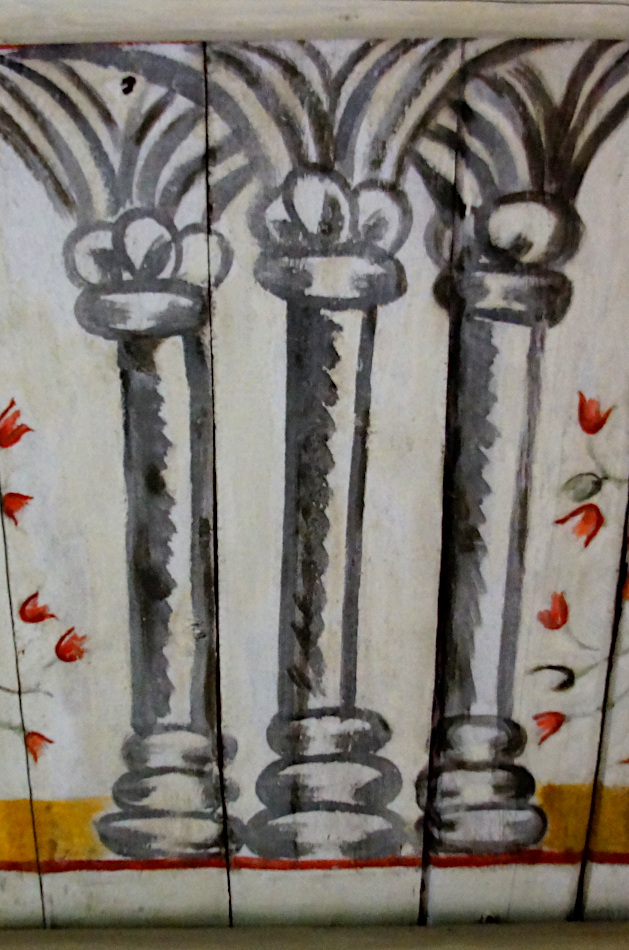 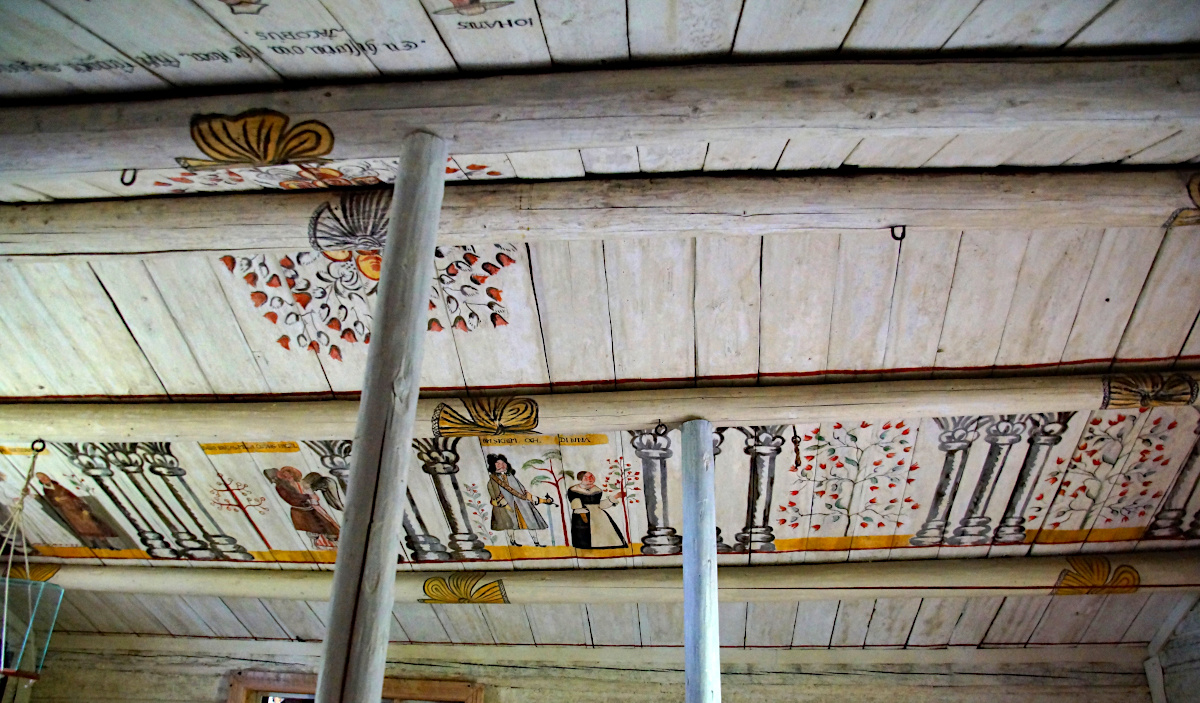 They started building the chapel in the 1650s and it was completed in 1665. It is often said that the chapel was built by fishermen from Gävle, but that's not entirely true. Barsta chapel was built mainly by the farmers in nearby villages, with some reluctant support of coastal fishermen.

During that time there was a lot of activity during the summer months in Barsta. Fisherman took their wife, children and even animals to live here. And also maids and herdsmen moved to Barsta for the summer. But during the winter it was quiet here. But the chapel was still used in winter by the fisherman, but now as storage area for their fishing tools. And even today you can see the hooks in the ceiling on which the nets were hung. 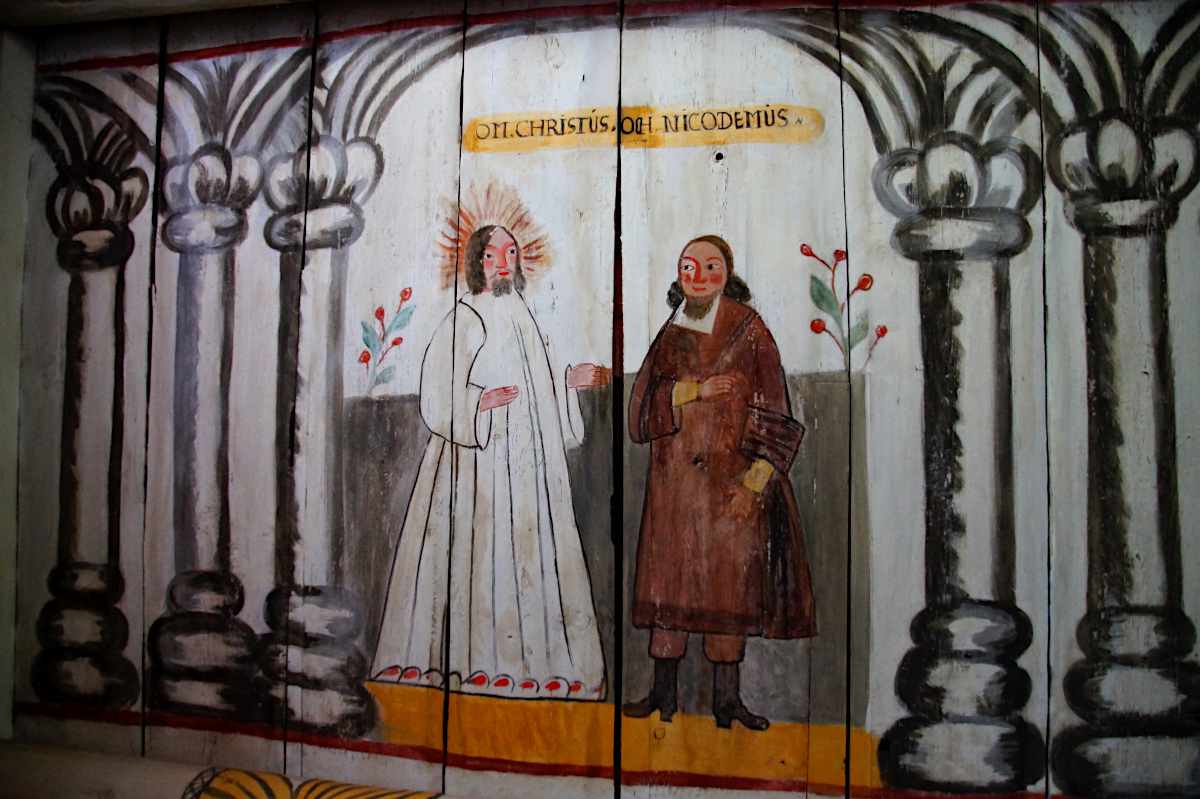 Jesus in conversation with Nicodemus

The chapel has been decorated with fascinating paintings. Among other things, we can see Christ in conversation with Nicodemus from the third chapter of the Gospel of John (photo above). These painting were made by Roland Johansson Öberg born in Sörbyn on the island of Ulvön. The paintings depict biblical scenes. And to be honest I can't call them really beautiful or artistic, but certainly unexpected, unique and fascinating! 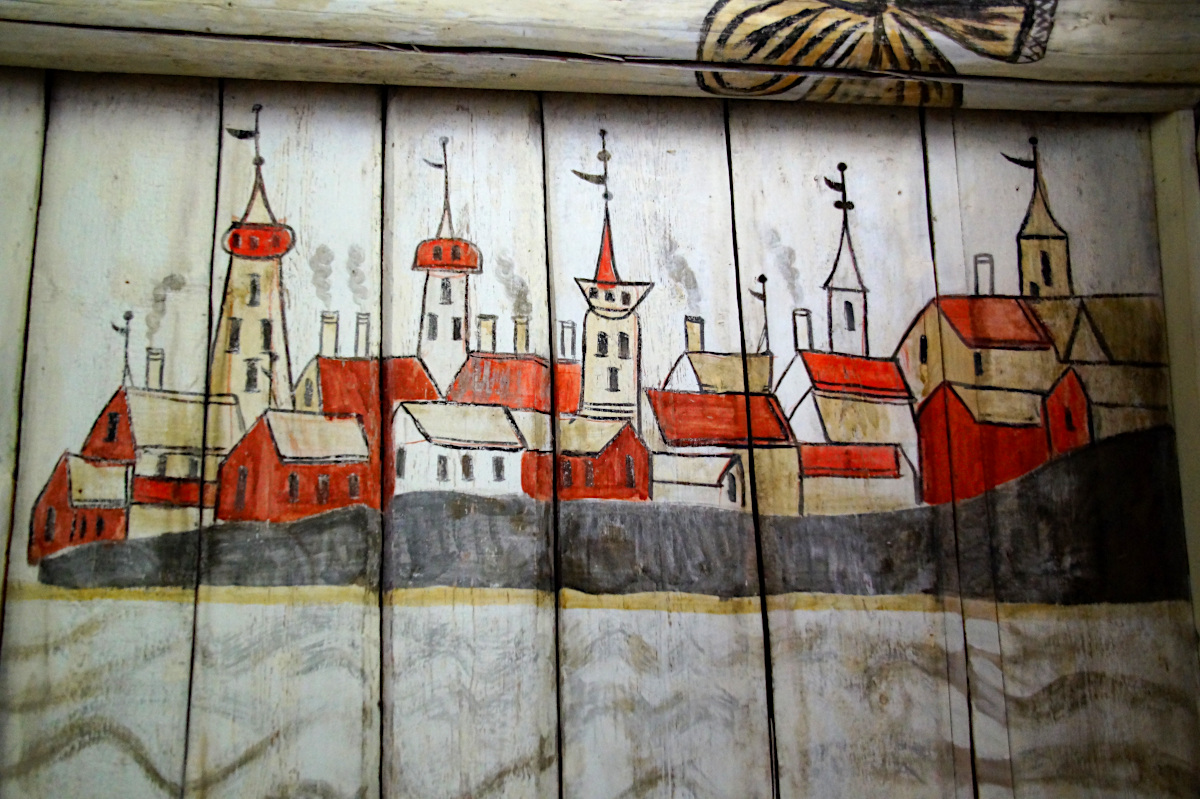 The ceiling painting located on the left side from the altar is a city built on gray stone slabs. Allegedly it depicts the city of Tiberis 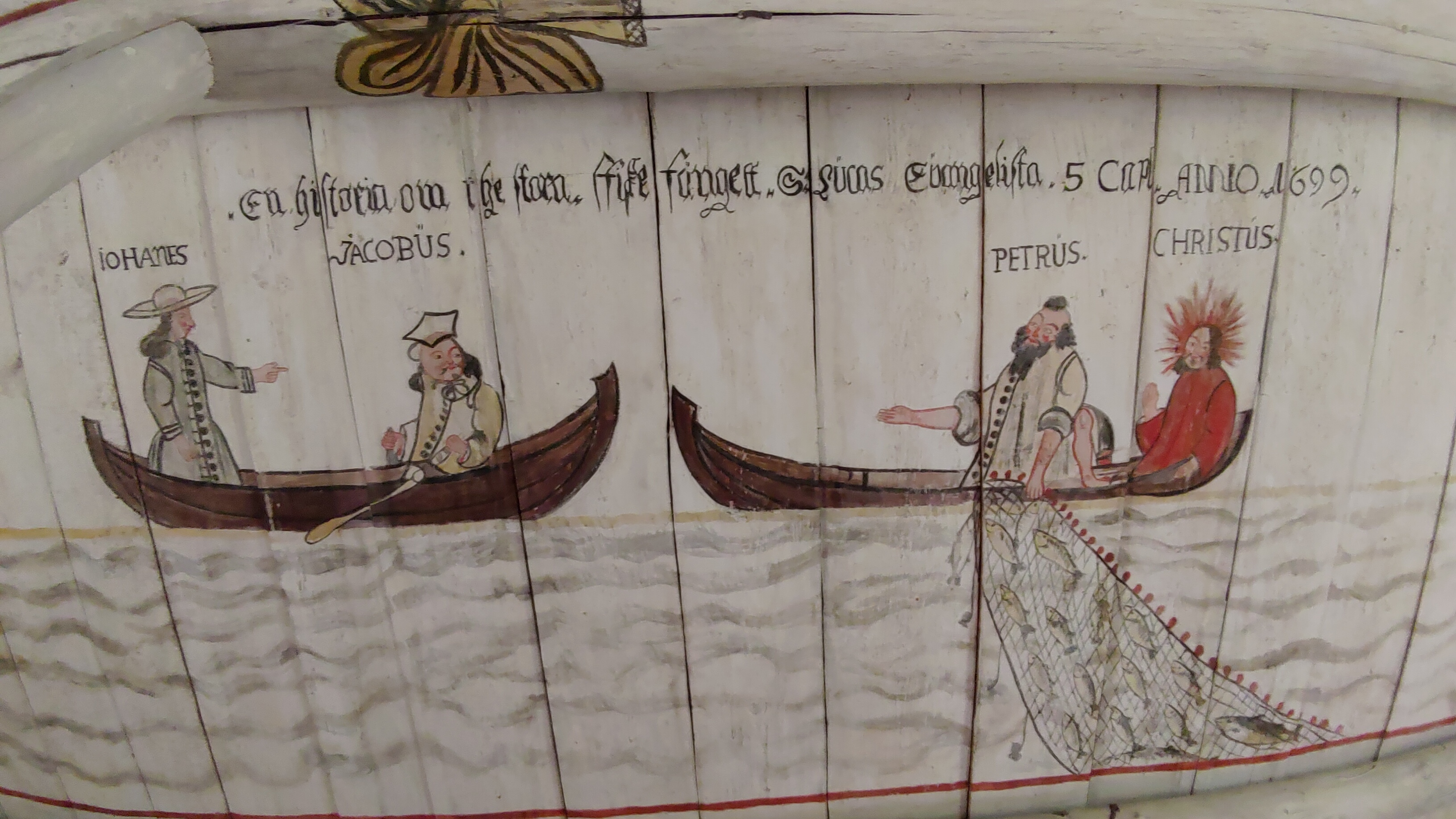 Roland Johansson Öberg was a Swedish church painter, active in the late 17th and early 18th century. Öberg was probably the son of a farmer from northern part of the island Ulvön. It is known with certainty that Öberg made paintings in two churches, but it is assumed that he made several paintings that cannot be attributed to him from an archival point of view. He made ceiling and wall paintings in this chapel in Barsta fishing village in 1699. The other one is the ceiling and wall paintings in Ulvöhamn's old chapel (on the island Ulvön, not so far from here), which he made in 1719. 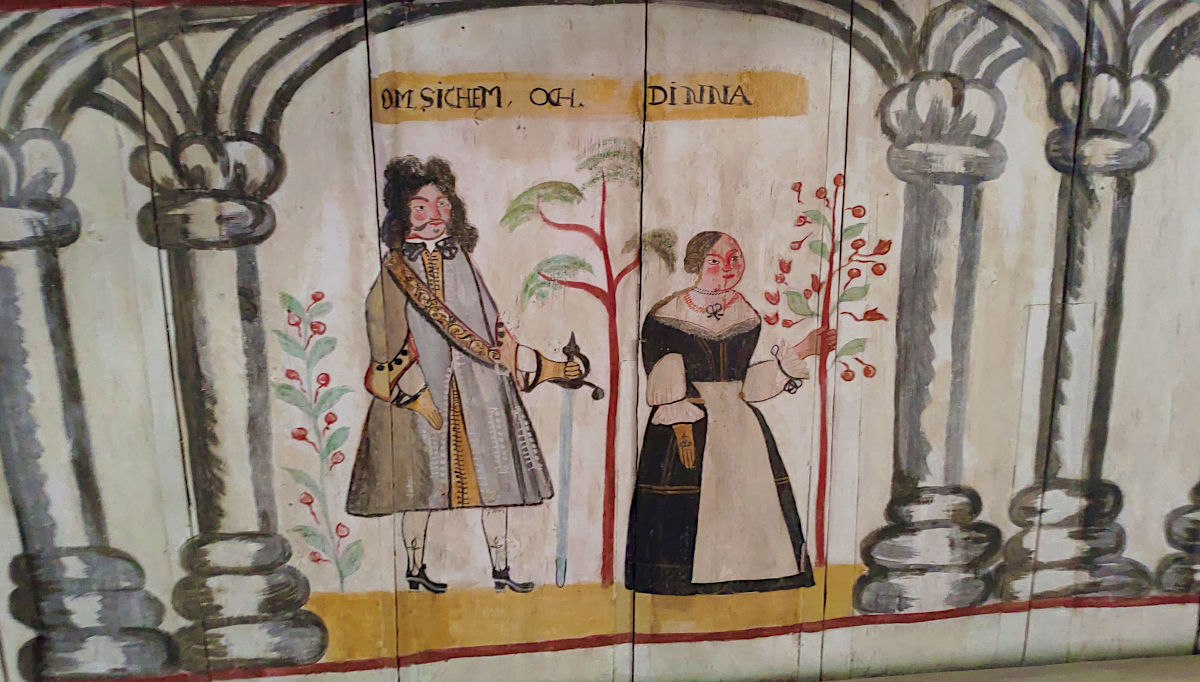 One of the fascinating ceiling painting is that of "Sichem and Dinna". In this painting you can see Sichem - son of a chief - in a long wig, gray-yellow cape, supporting one hand on a sword. On the other side of a pine-like tree stands Dinna, dressed in a long dress, white blouse and a white apron, holding a berry tree. The motif is taken from Genesis 34 chapter. 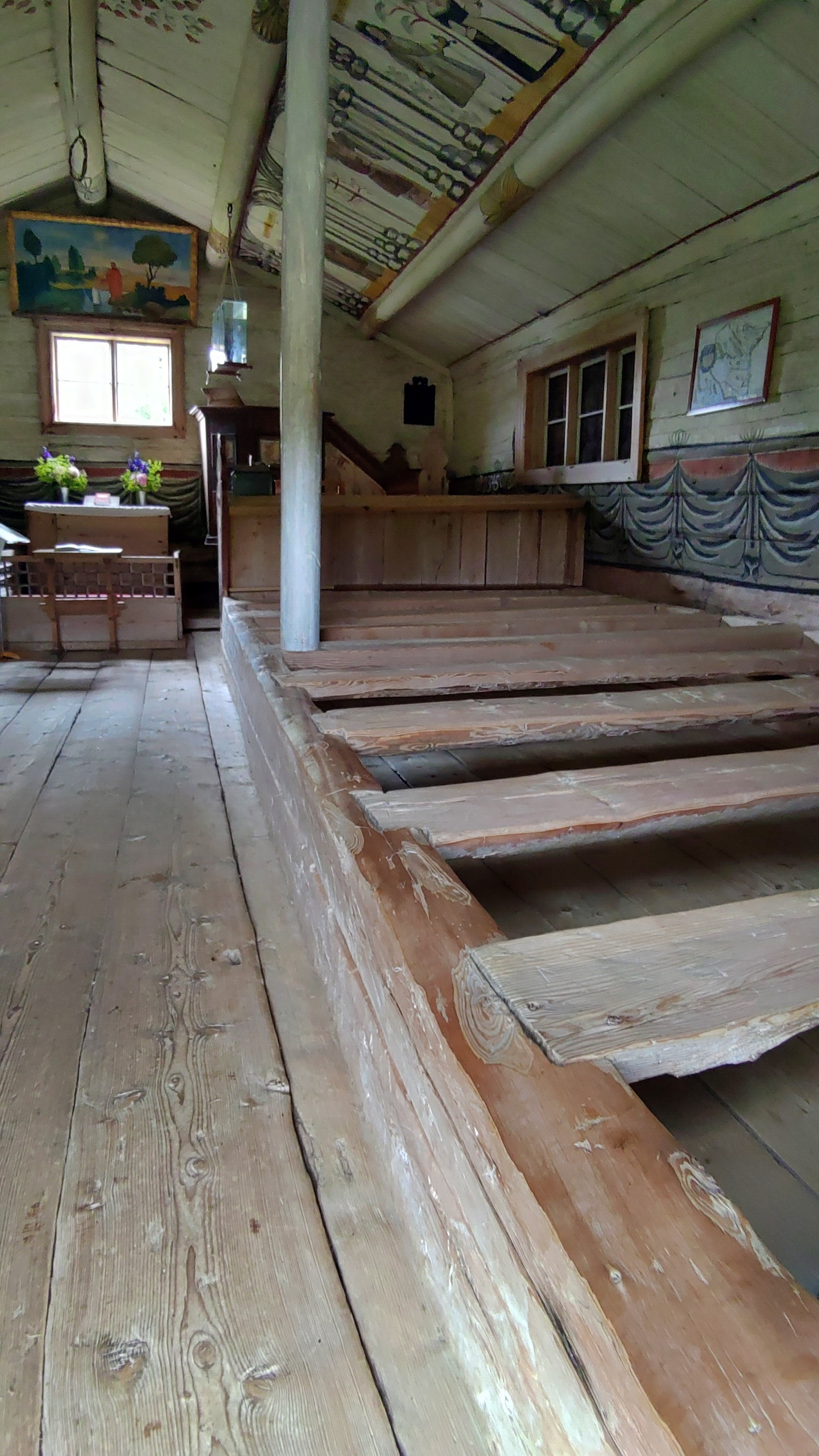 benches on the men's side 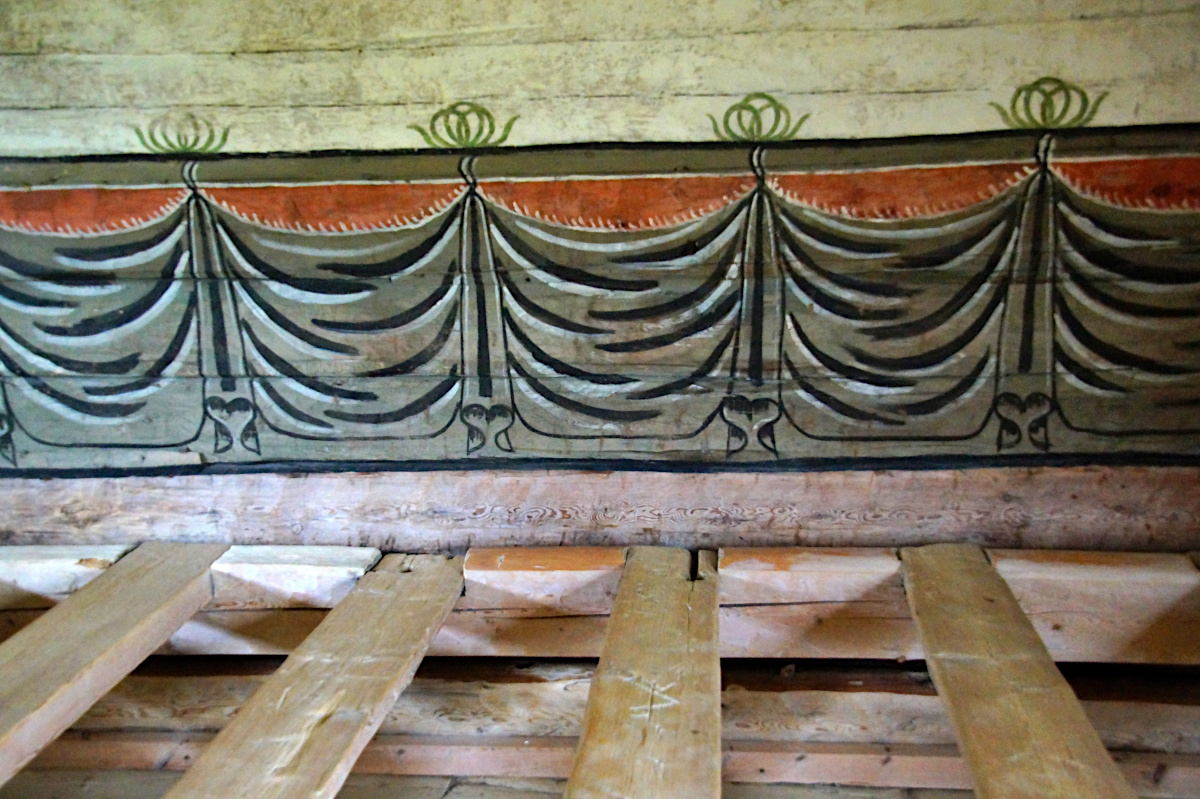 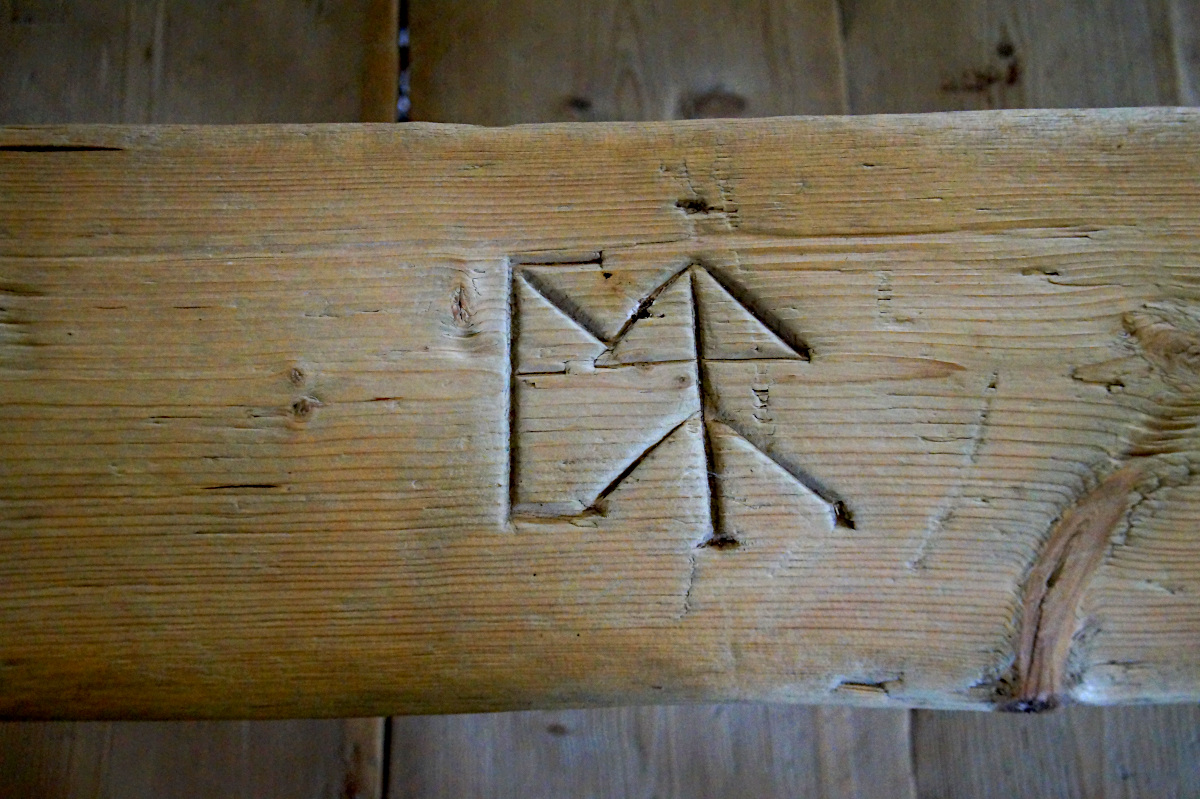 engraving in the wooden benches

The benches in the chapel are really unique. The old rustic wooden benches do not have any back-rests, and I don't think I have seen that before. And although they look rough, they are quite smooth to the touch. But when you look a bit closer you will start to notice some even more interesting details and differences between all these benches.

When you close at the photo below, you will notice that the end of the benches on the left side of the chapel are lower; they are only one log in height. There sat the women. This was done to make it easier for the women to step over the ends with all their skirts. The good manners did not allow the ladies to lift the skirt when they would take a seat. On the right side, the benches are timbered at bench height. There sat the men. And if you look even more closely at the photo below you can even spot another interesting difference: the benches at the very front of the chapel, on the left side, are actually lower benches. This is where the children used to sit, facing the parents.

Another striking detail are the marks that are engraved in the wooden benches (photo right above). You can find them on both the men's side and the women's side. Many had their given places in the chapel that they sat on each time. 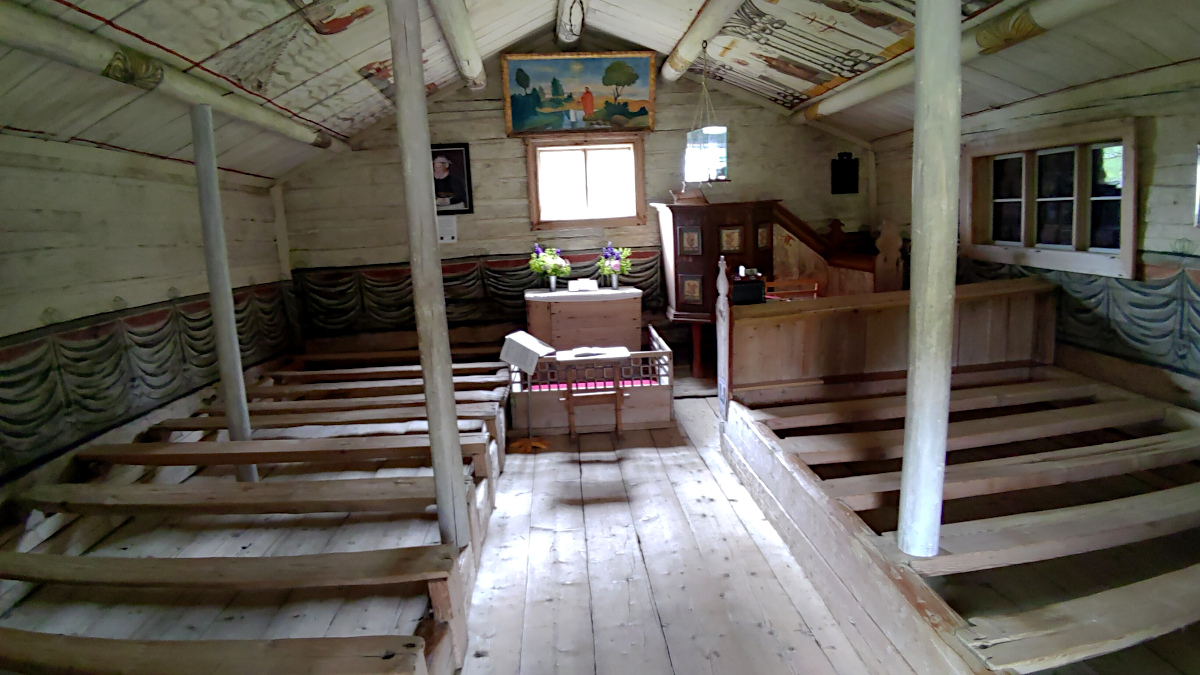 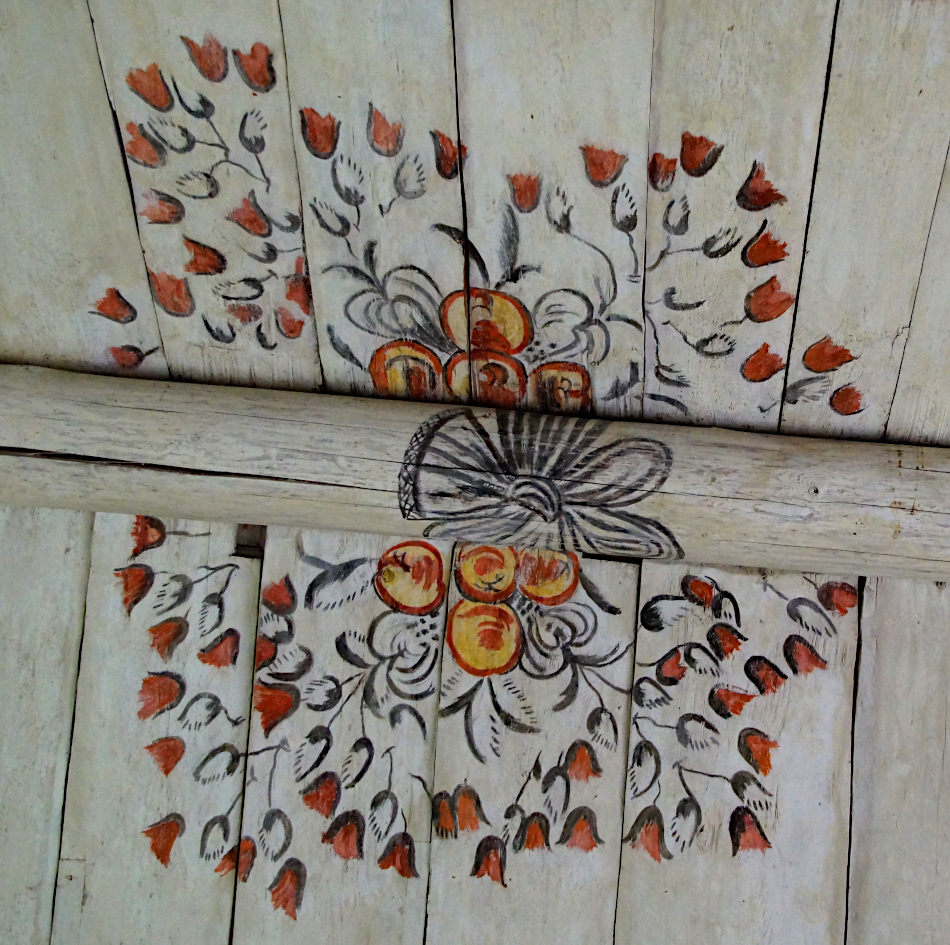 looking up to the ceiling 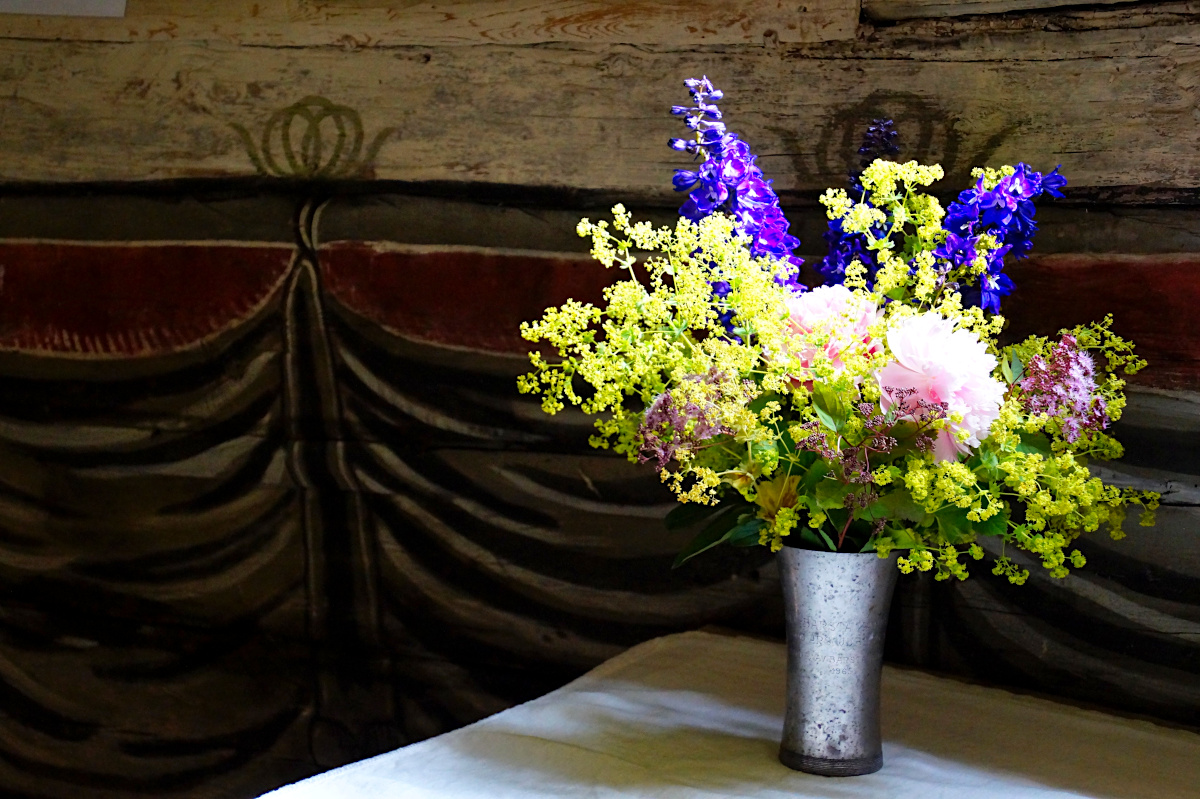 The families in Barsta take turns to make sure that there are fresh flowers on the altar on a weekly basis. 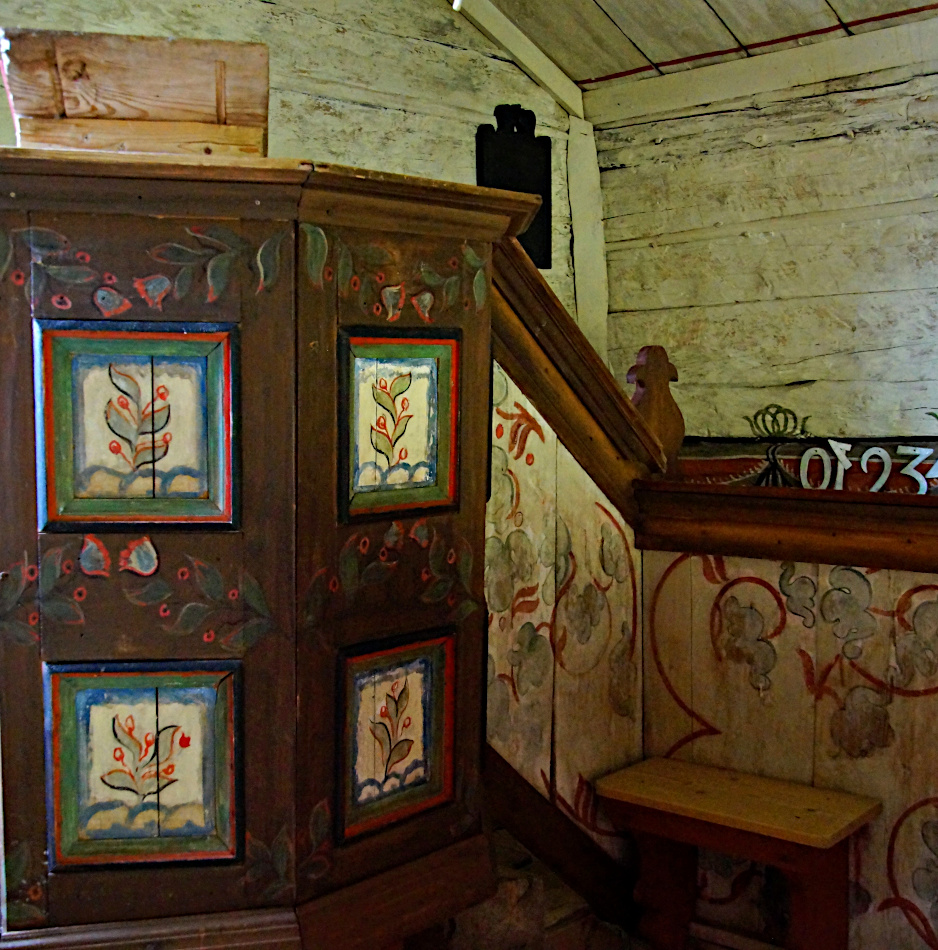 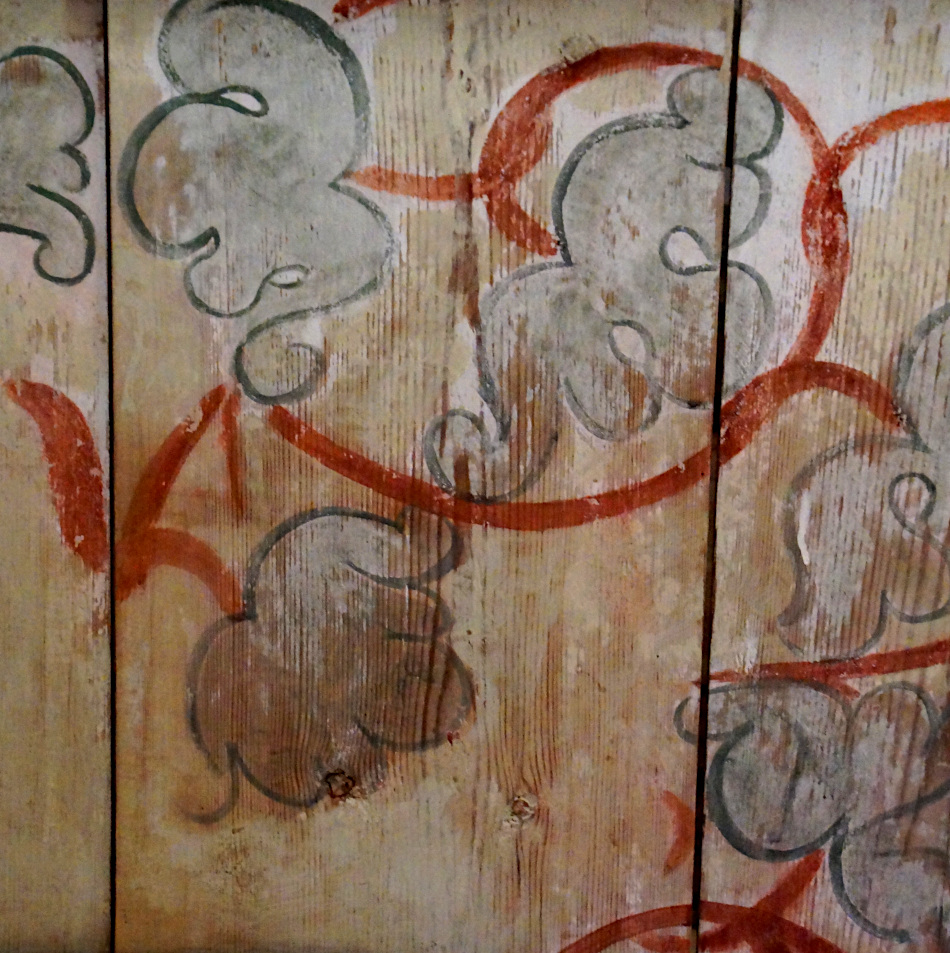 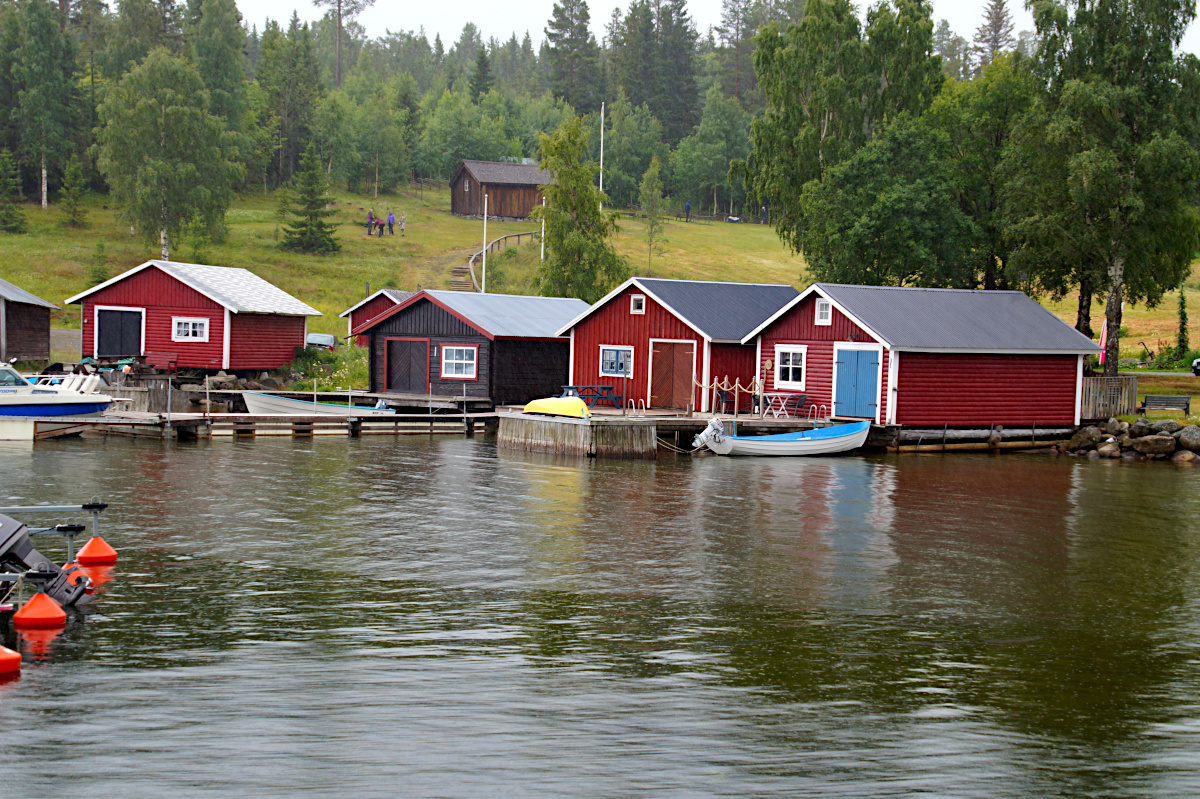 The boat houses in the harbour of Barsta, and in the very background you can see a small brown building, which is the chapel

The history of the village of Barsta goes way back and it was mentioned in a tax document in the year 1418 when it was called "Bärastadhum". From the chapel you have a view of the village with the road that runs along Barstaberget (135m high) down to the sea and the harbor with all the fishing huts and the large Barstaön which gives the bay its protected location. In the photo above you can see the boat houses in Barsta and behind it, on the slope of the hill, the Chapel of Barsta. 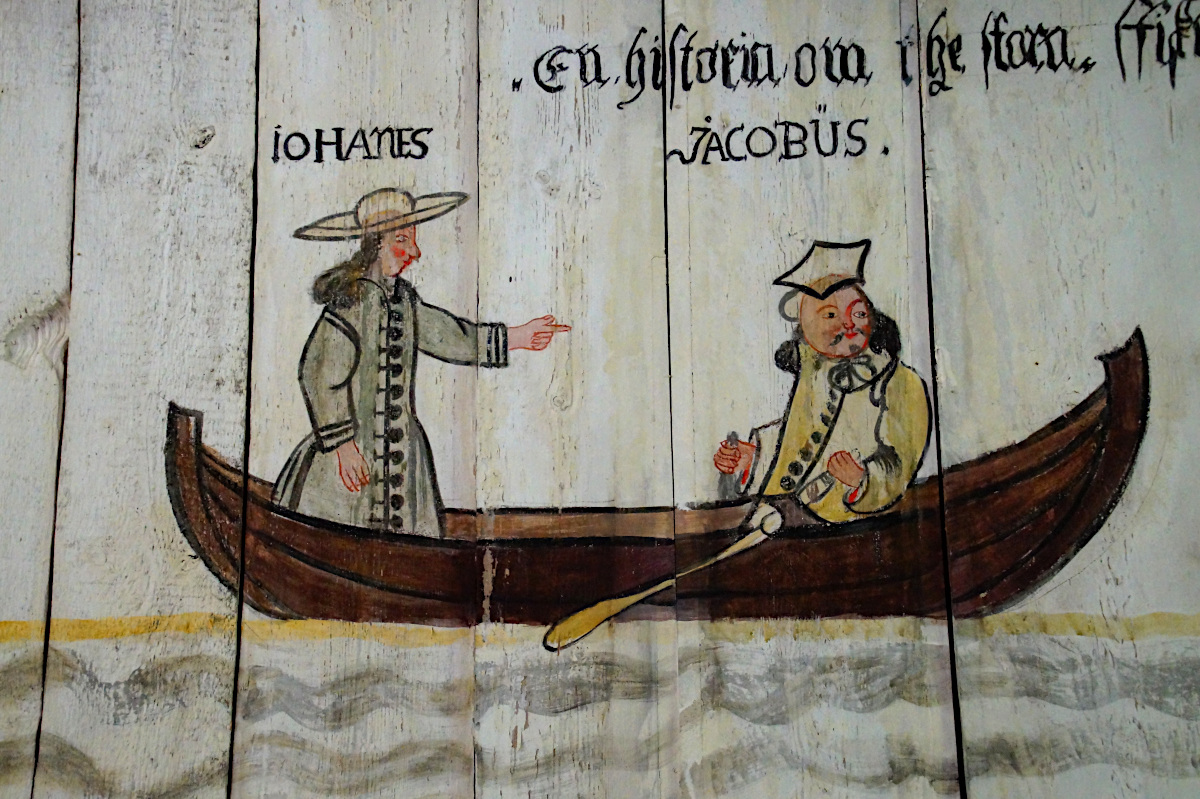 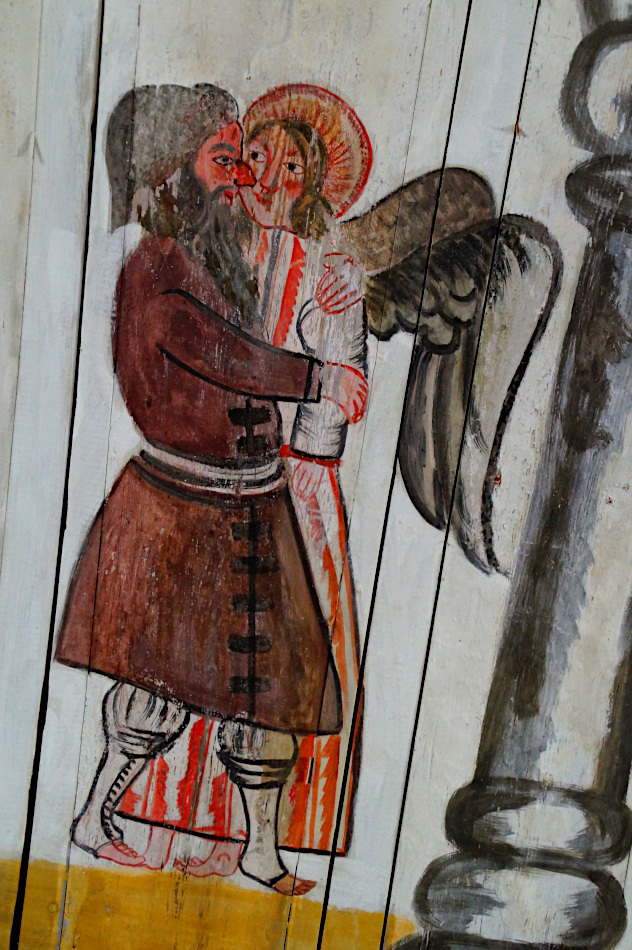 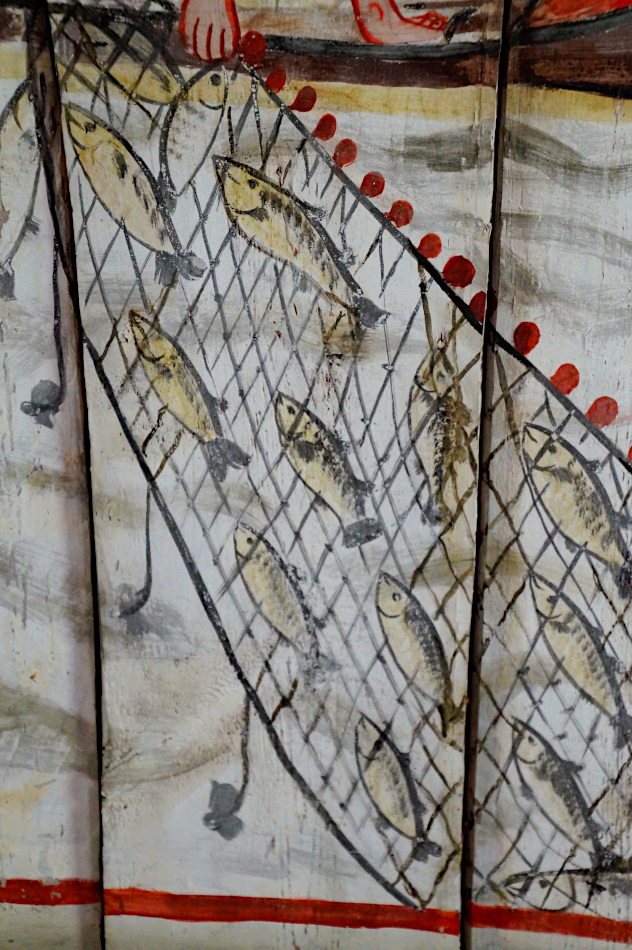 A rainy day made us go here, and I am so happy that I did! One of the most fascinating chapels I have ever seen, absolutely worth a visit.