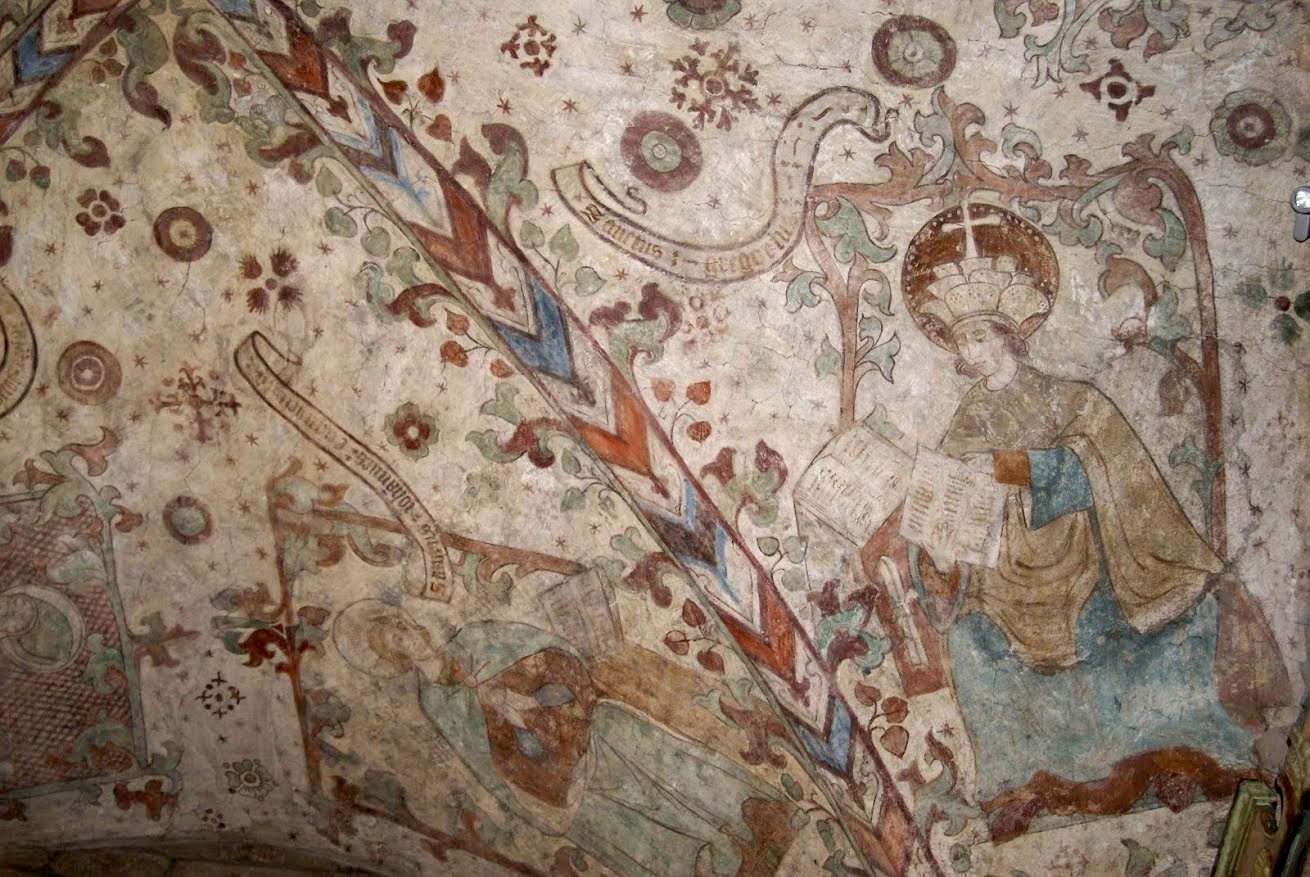 When I drive through the Big Lakes area of Sweden, I often try to make a stop at one of the many historical sites in this part of Sweden. And on this day in July, returning from a vacation on the West Coast, we made a stop at Husaby kykra (Husaby Church). This is one of Sweden's more known churches, and absolutely worth a visit in my opinion! The triple turret tower looks very impressive. And the inside of the church has a lot of interesting historical details, like the hagioscope (lepars window), the 'ambo', and of course the ceiling paintings from the 1300s.

The first church that was built in this spot was probably a 'stave church'. In the early 1100s, the stone tower was added at the western end of the stave church. A little later, in the same century, the long house with absid choir was built of tufted sandstone and in a Romanesque style.

Below you can find a photo impression of my visit to Husaby Church. And as usual, all the photos in the collage are clickable, so you can view the larger photo if you like.

Husaby church is located south east of Kinnekulle and is mostly known for being the place where Olof Skötkonung (Swedens first truly Christian King), was baptized (in a sacred well, just east of Church).

Olof had a Kings Farm near Husaby, which he donated to the first bishop's seat in Sweden. He ruled from the 990s until his death in 1022 and is usually said to be the first king ruling both Svealand and Götaland. 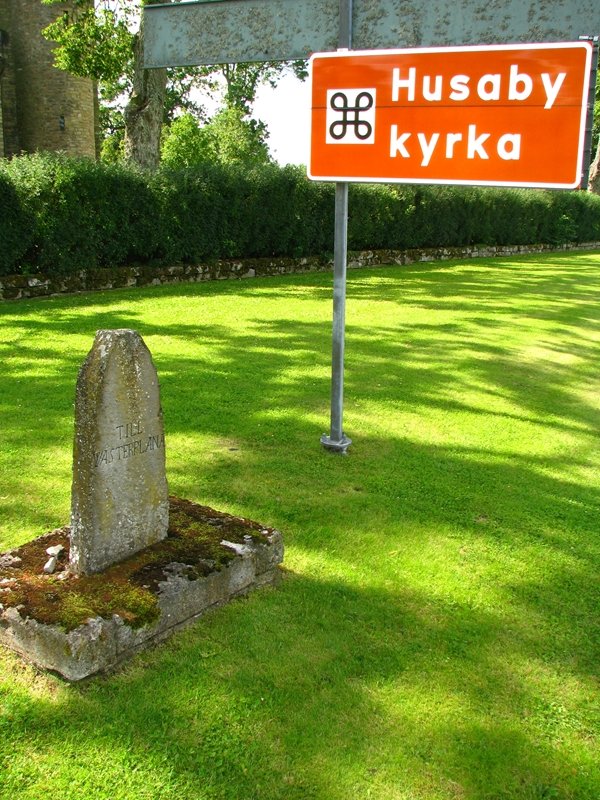 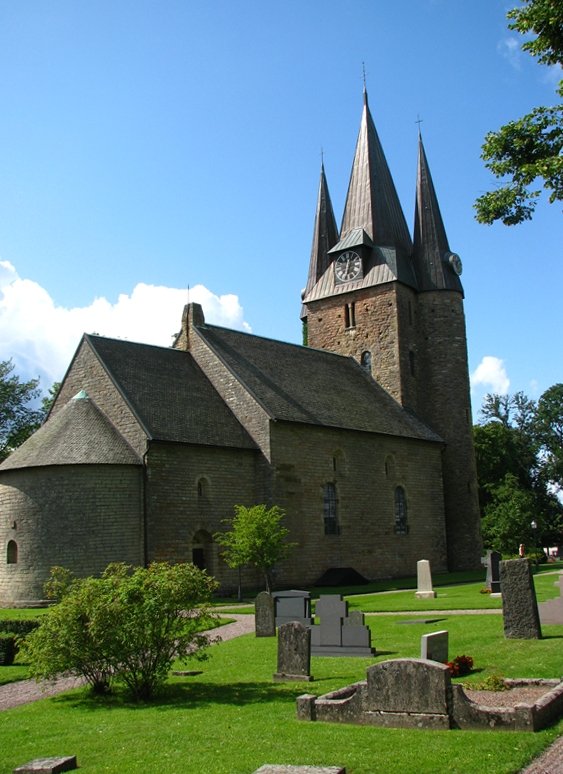 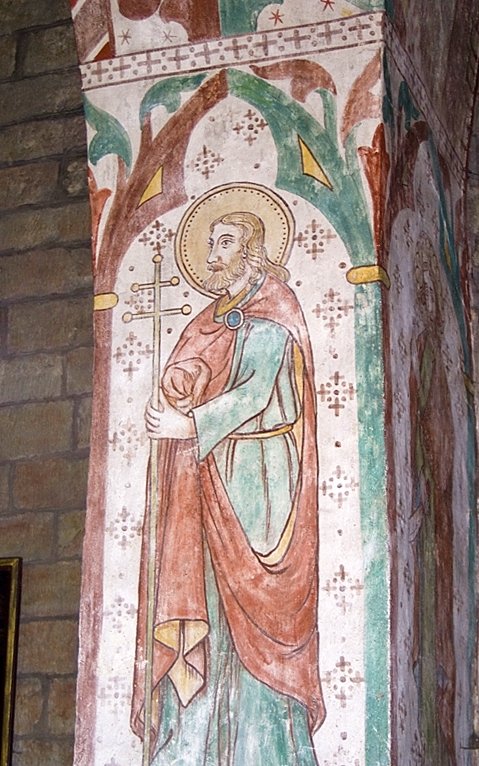 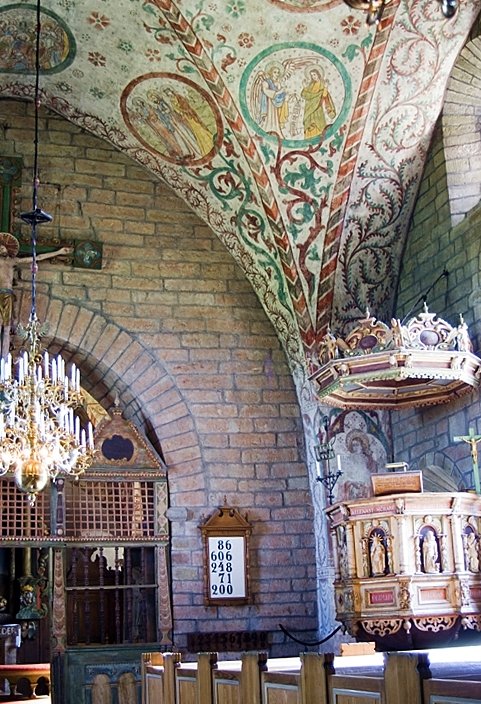 The tower (photo right) is really impressive, and its architecture is rare for Sweden. The tower has a rectangular center that is flanked by two fragile round towers; inspired by Karolingian architecure.
It originally functioned as a defence tower. And yes, it looks more like a defence tower than a church tower! 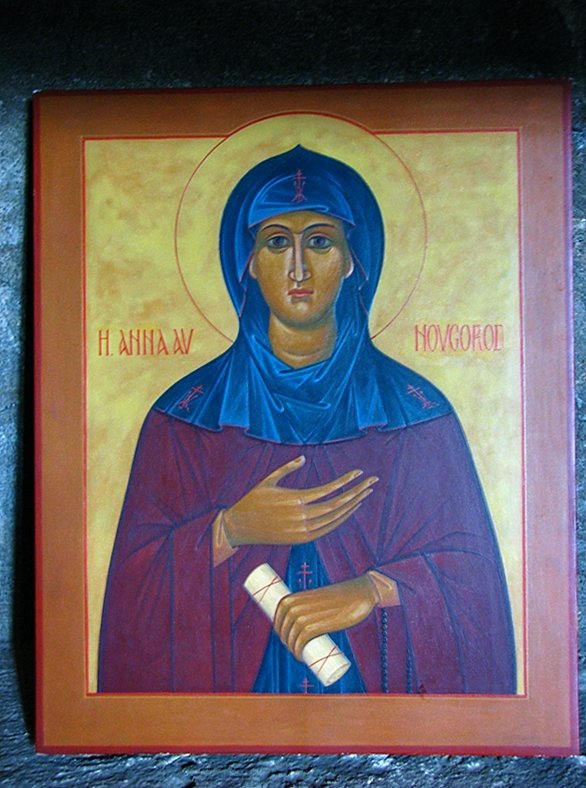 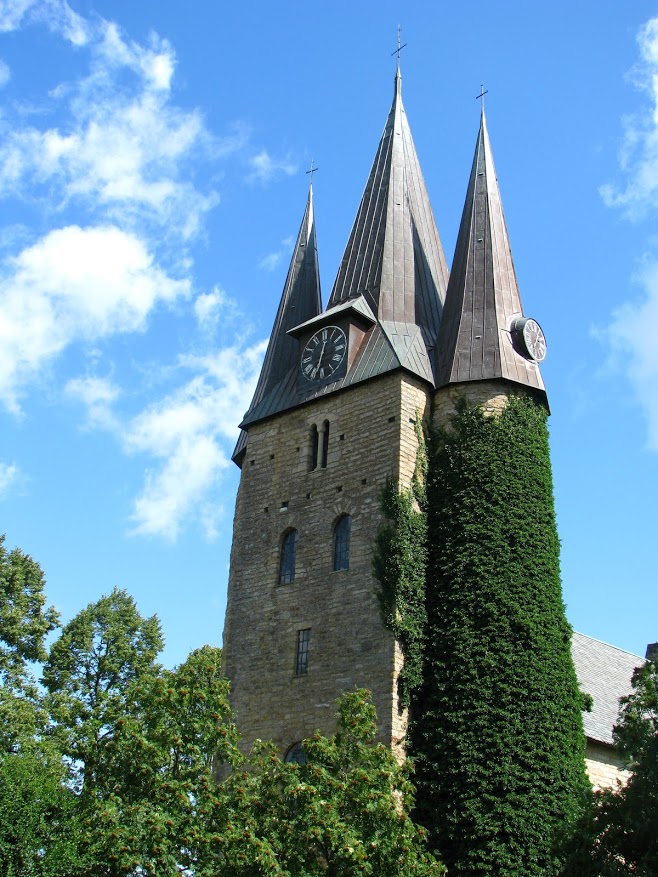 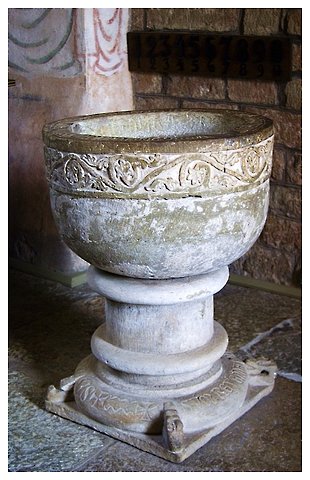 Baptismal from the 13th century 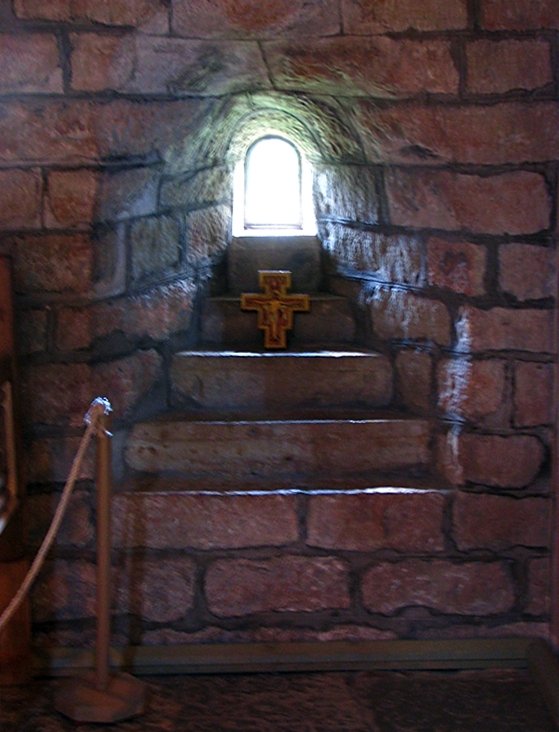 One of the unusual things in Husaby church is the small window that can be seen on the south side of the choir (photo to the left).

This is a hagioscope (leper window) from the Middle Ages, preserved in the south wall of the choir. One theory is that this is a "communion window" so you could get the sacraments when not allowed into the church.

Photo below shows the Choir Screen. A Choir Screen is a masonry or other boundary between the Choir and parish rooms (for example, long houses) in a church. Choir screens in Sweden and Finland have often gates and are adorned by pyramids, as is the case in the Husaby church. 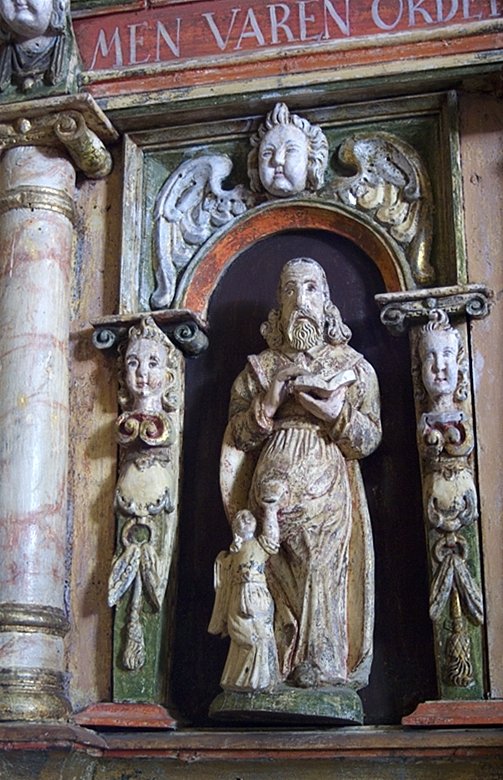 Detail of the pulpit from 1671 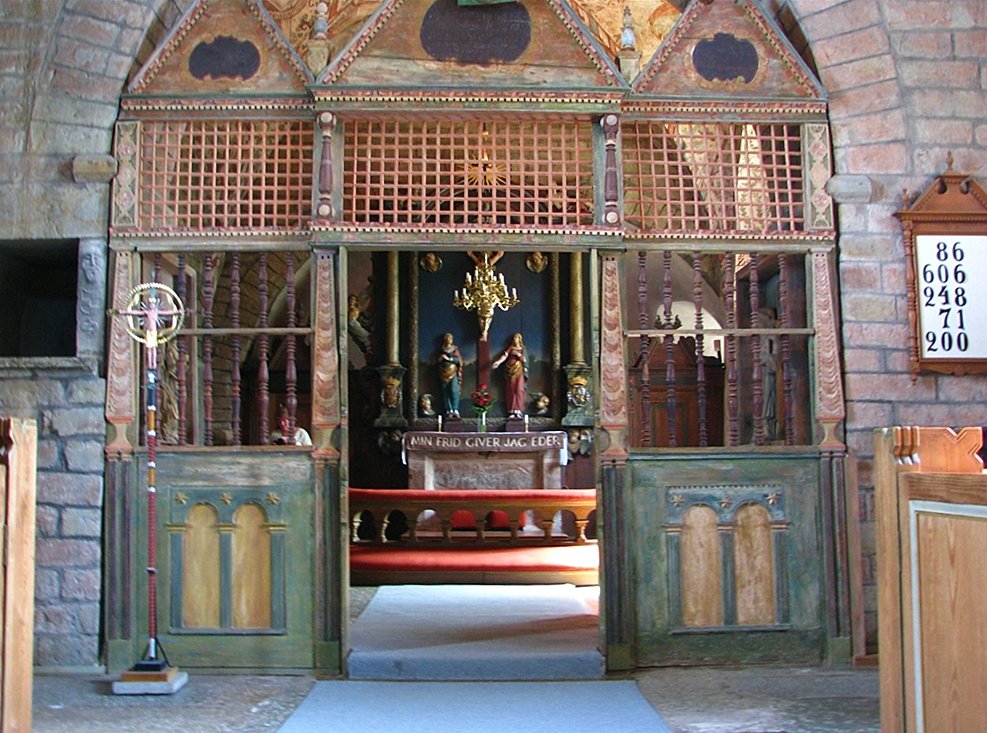 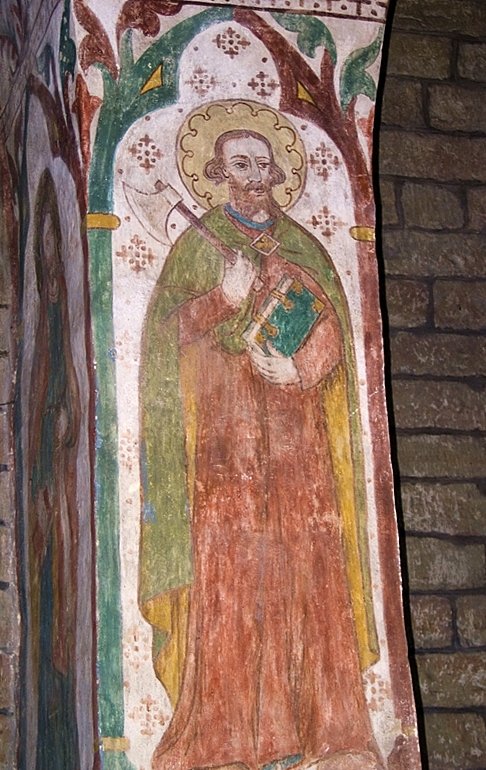 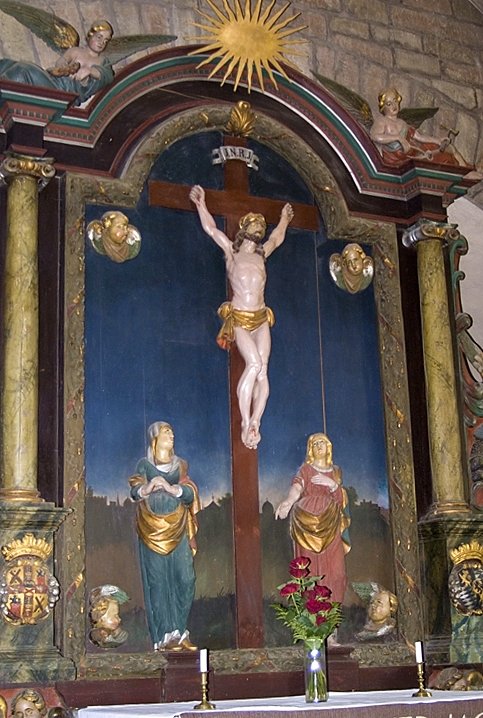 Altar from 1300. The altar board is donated by Magnus Gabriel de la Gardie 1671 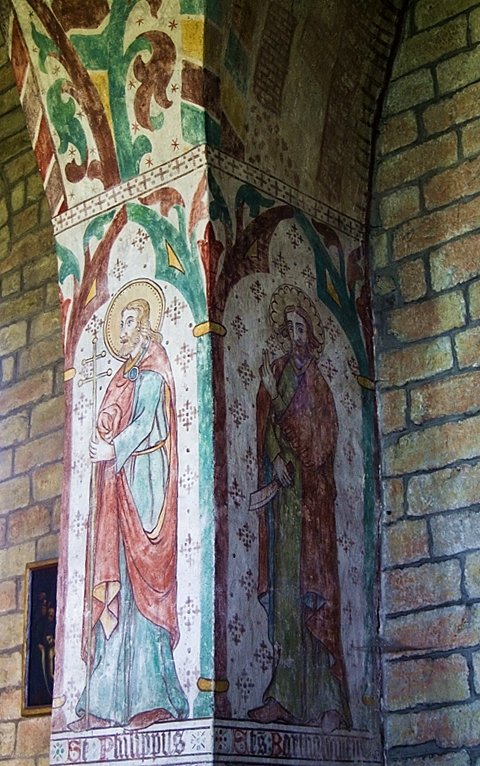 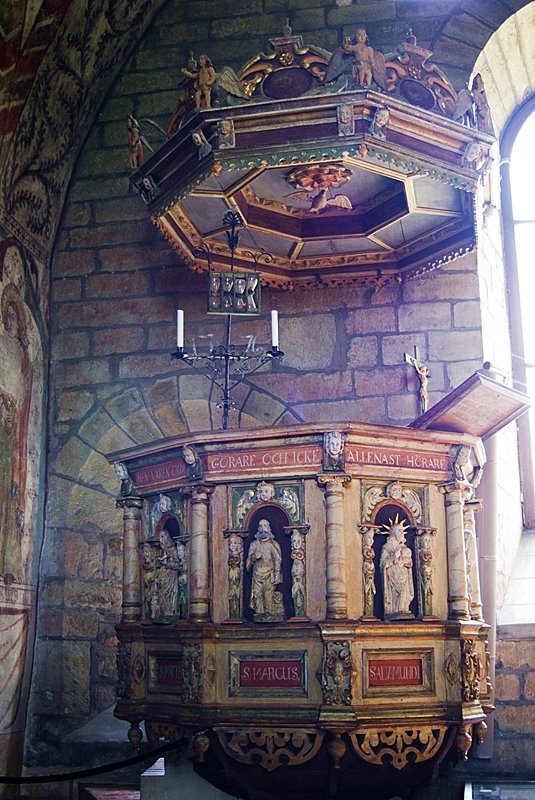 The present pulpit is from 1671 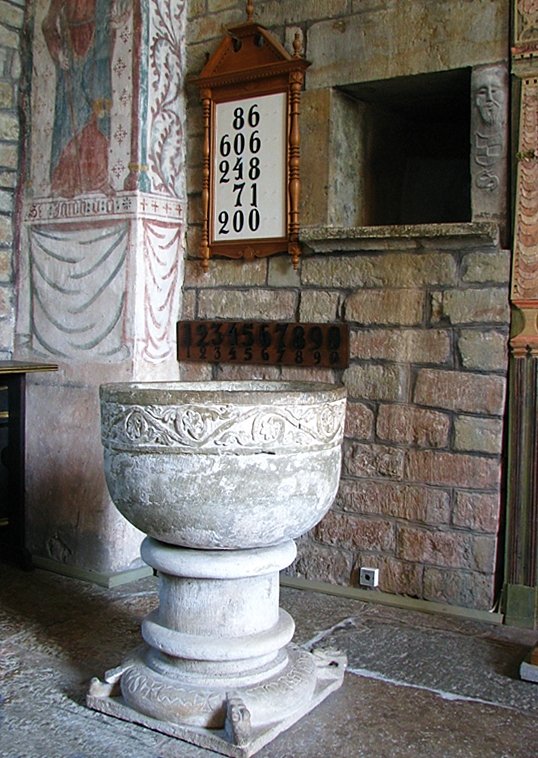 Preaching in Swedish was rare during the Middle Ages. Those held were performed in a so-called 'ambo'. In Husaby there is one such. In the photo to the left (above the baptismal) you can see the 'ambo'.

The ambo is nothing more than an opening in one corrugated wall, facing the longhouse. Here stood the priest and spoke to the people. In front of him, in the opening itself, there was a stone plate with an inscription in Latin. 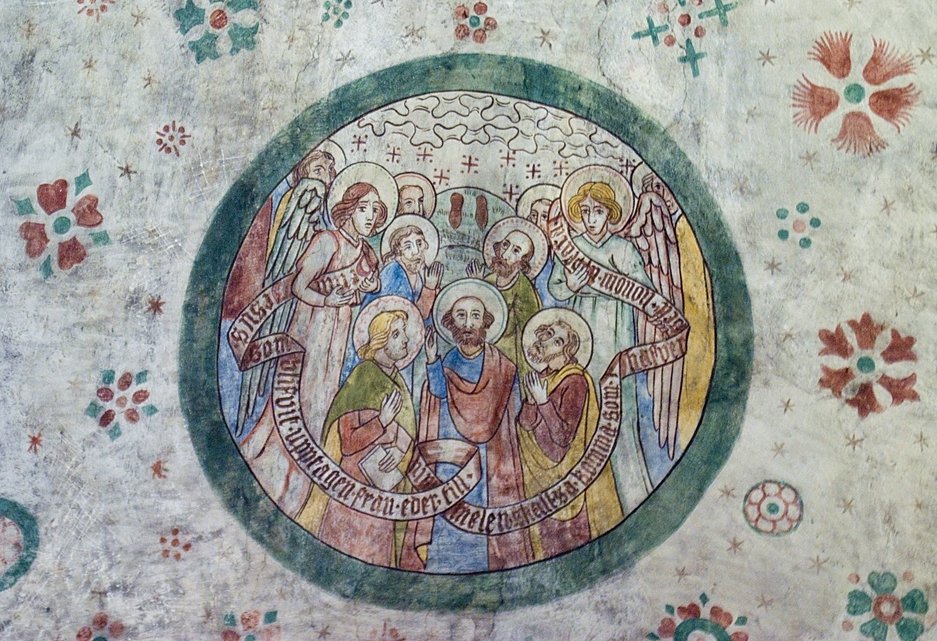 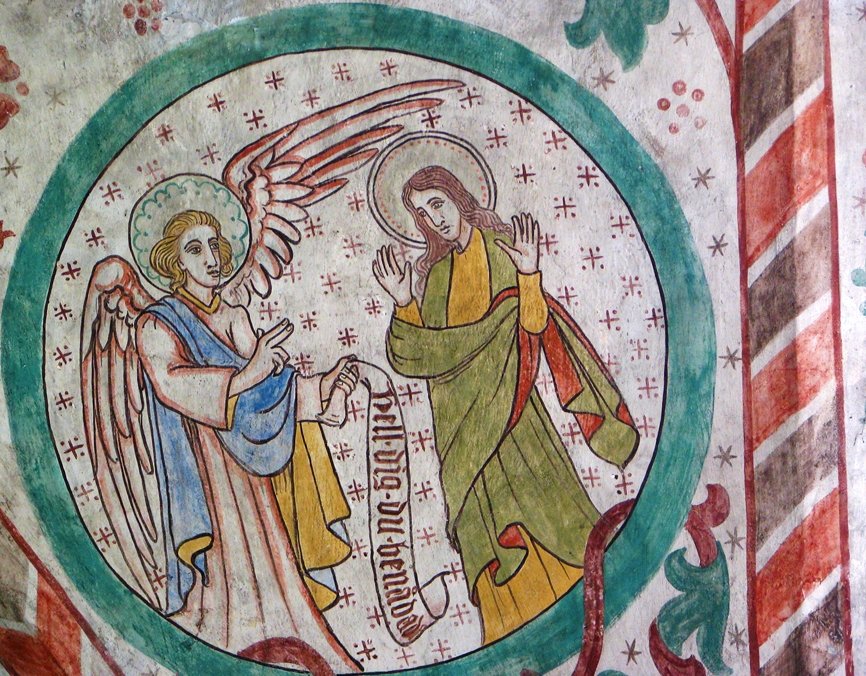 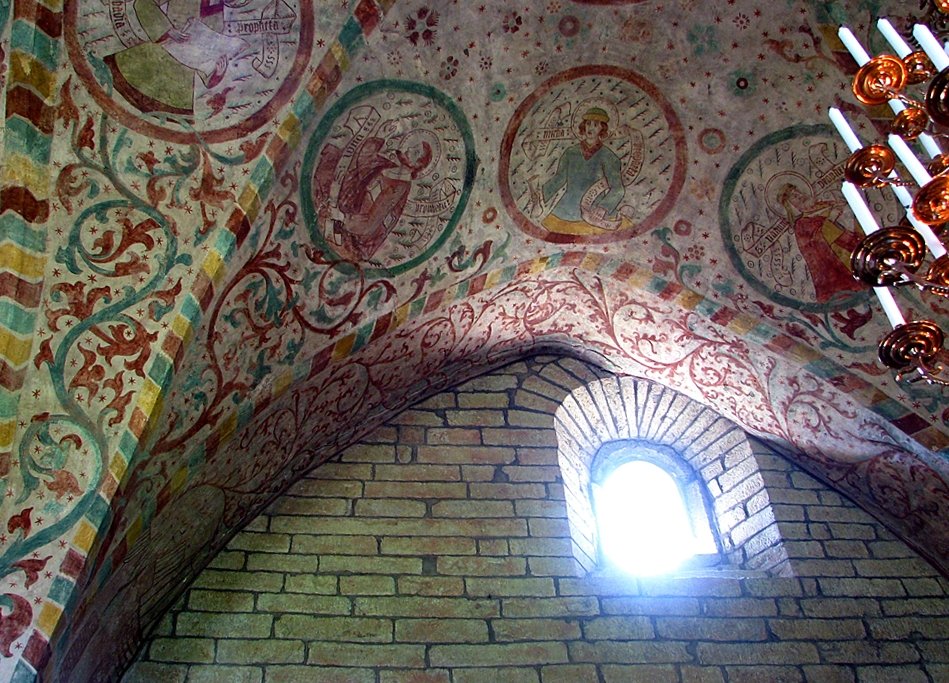 Really interesting for me where the paintings on the ceilings. The painting in the church are actually from 2 different time periods.

The church vault was built in the 1300s and decorated with paintings. Unfortunately these were whitewashed in the 1700s. During a major restoration in 1901 the original paintings were uncovered, but very badly damaged and could not be restored. So instead they painted pictures of Jesus' life and these can be seen in the churches longhouse (photos above).

If you look at the photos below you can clearly see a difference in style. These paintings are located in the Choir where the orginal paintings of the 1300s are still visable. 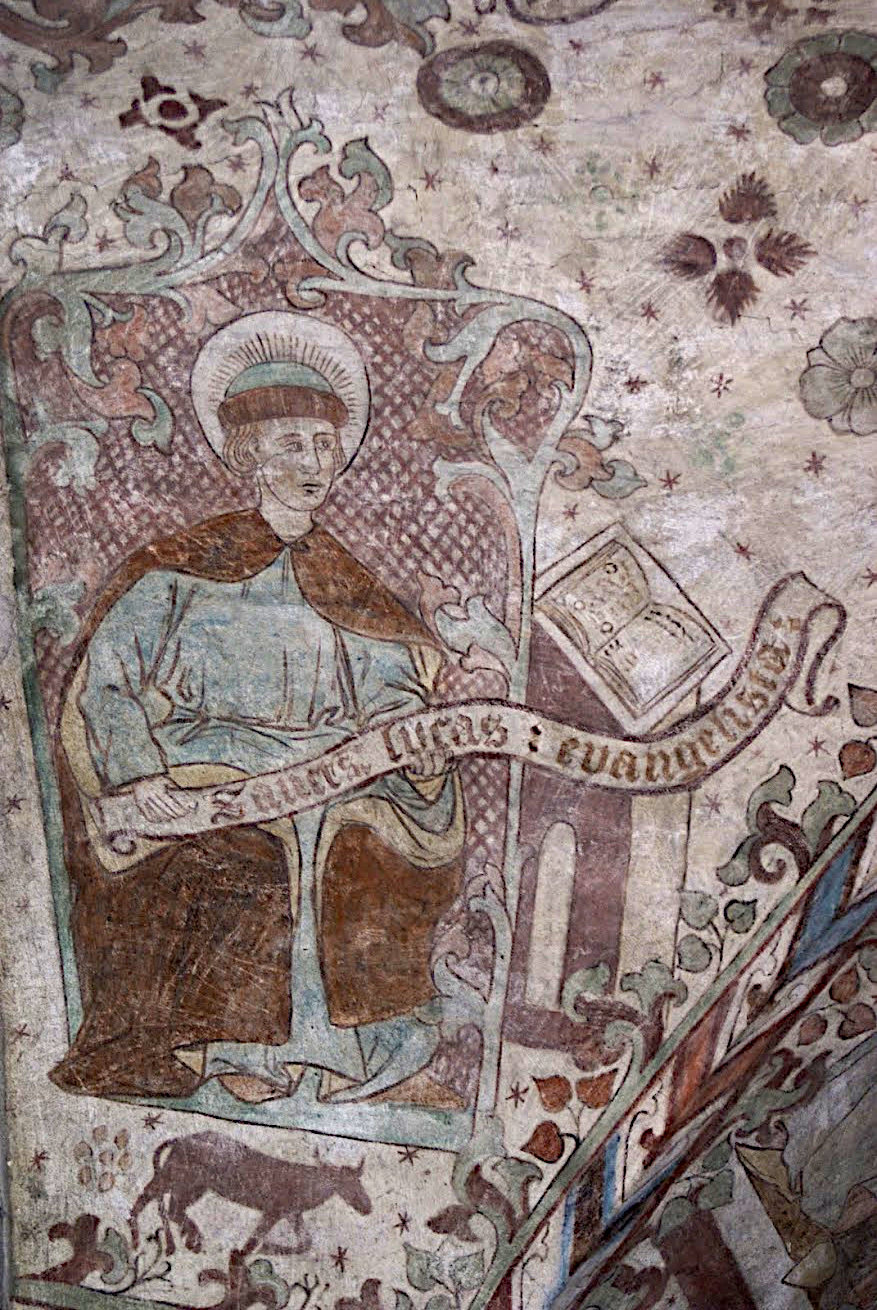 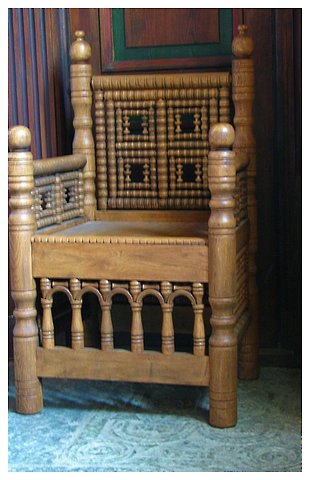 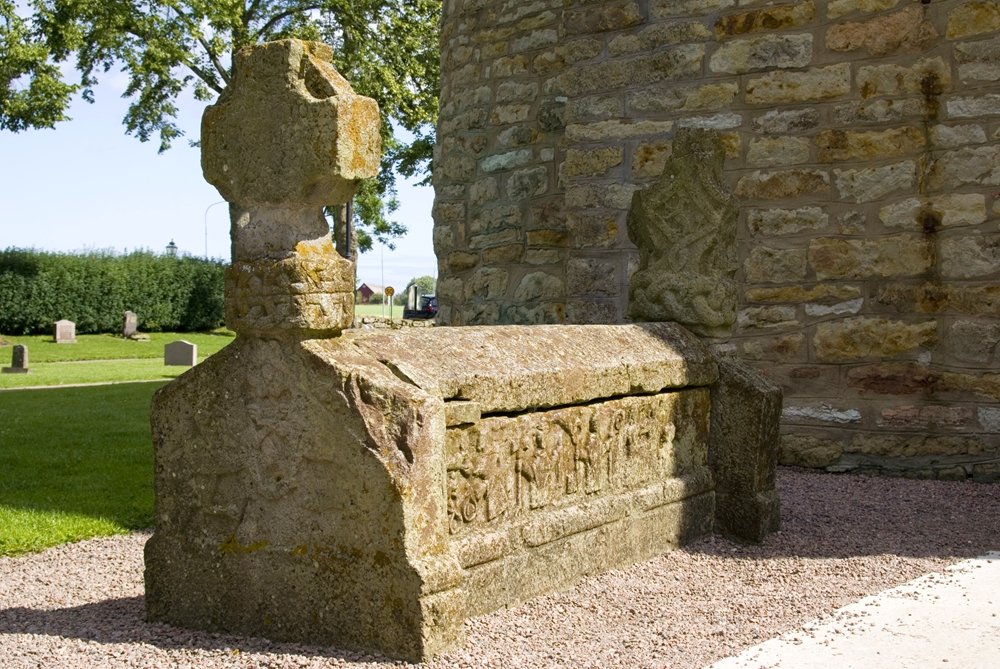 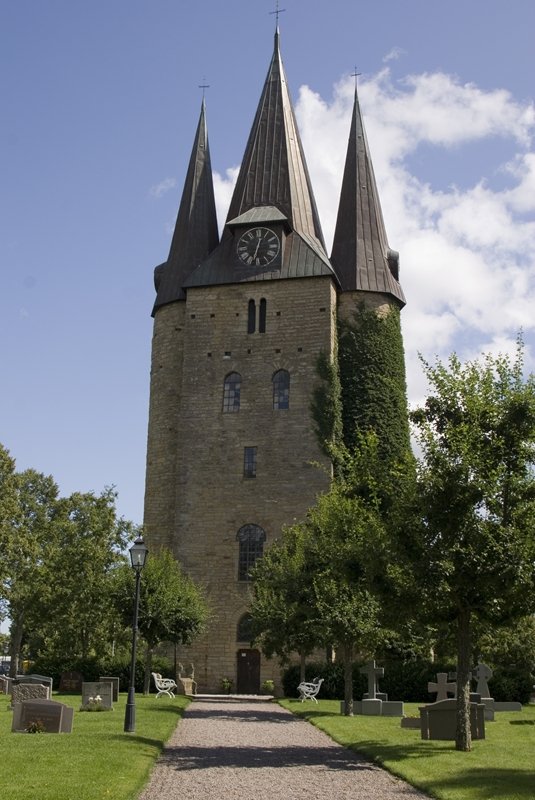 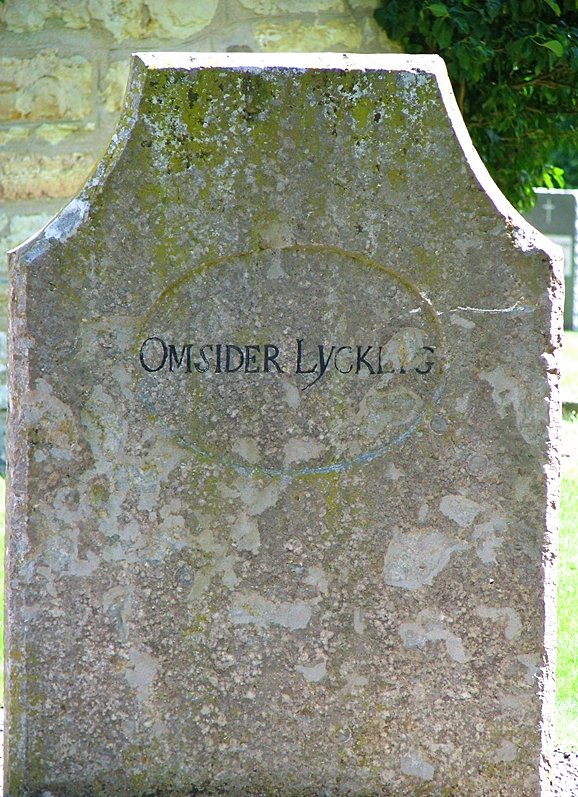 The two tombs in the form of two large stone coffins, outside the entrance is said to belong to Olof Skötkonung and Queen Estrid.

The inscription on one of them says: Finally Happy 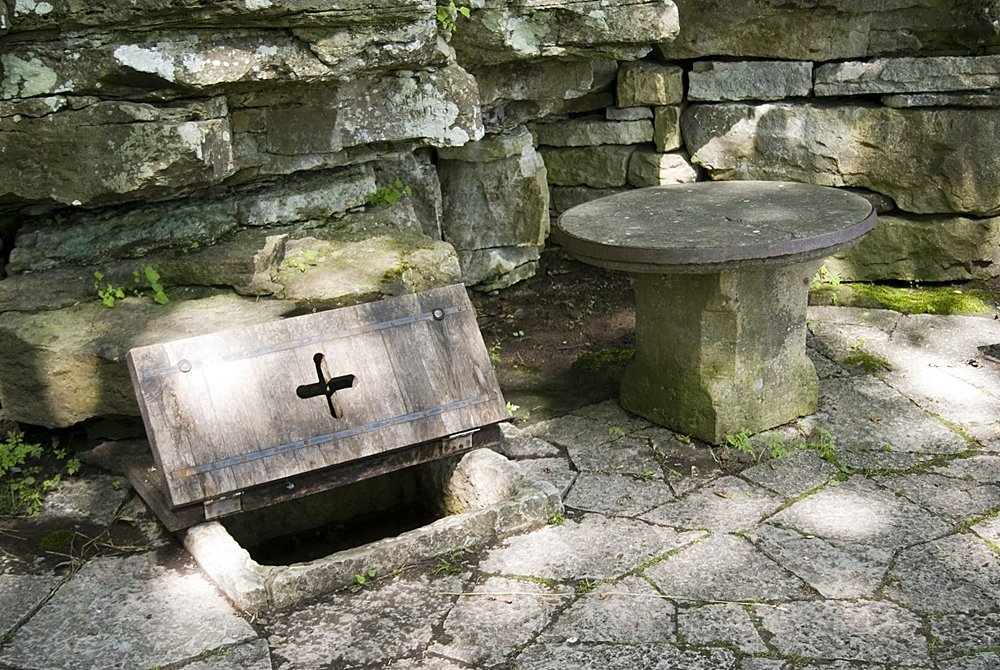