This is as far I guess that you can get off the beaten path. Well, at least it is a very good attempt to do so! These are two tiny, tiny villages located on the edge of the Penada-Gerês National Park in Northern Portugal.

I got a tip about these villages from tourist office inside the National Park, after mentioning that I would like to visit some really off the beaten paths places. And he was spot on with his tip, as I thoroughly enjoyed my visit. It is so off-the beaten path that it might be tough to find it on your map 😉 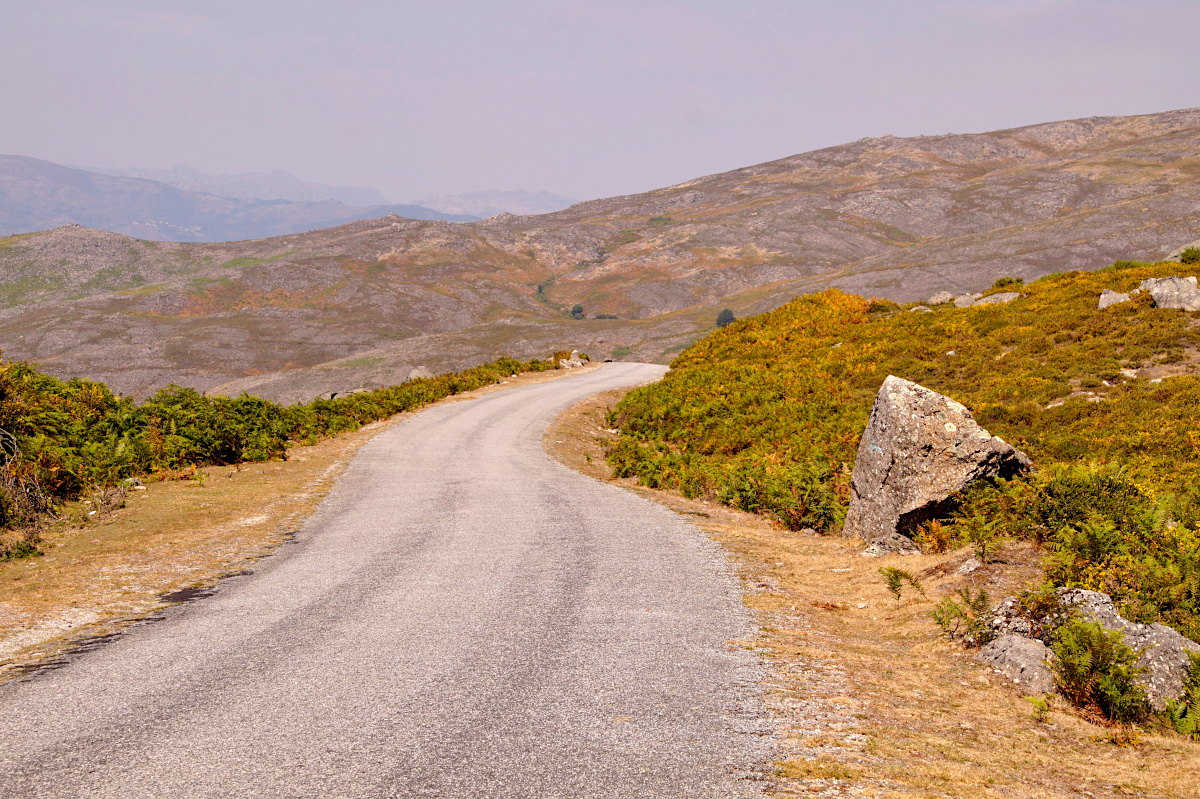 It is a very hot day in late August and we are driving the narrow and winding road, with curves and more curves, through the Peneda-Gerês National Park. Today we are heading towards the old village of 'Branda da Aveleira'; an off the beaten path destination, in the middle of the mountains, surrounded by beautiful landscapes.

The sky is hazy today as quite a few wildfires are ongoing in the area, giving it an eery feeling, and which is also a touch worrying. The drive is slow, not only due to the winding roads, but also because of the magnificent landscape that we are driving through, which is grabbing our attention with each corner that we turn. 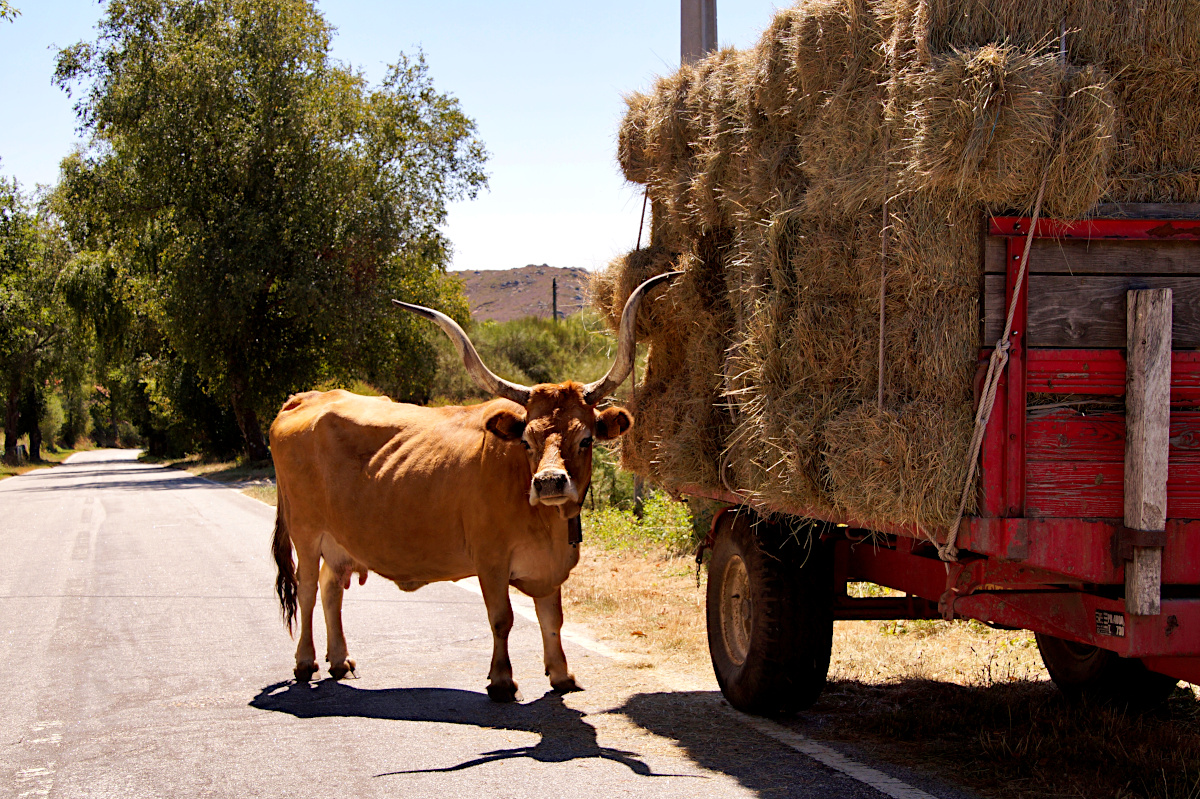 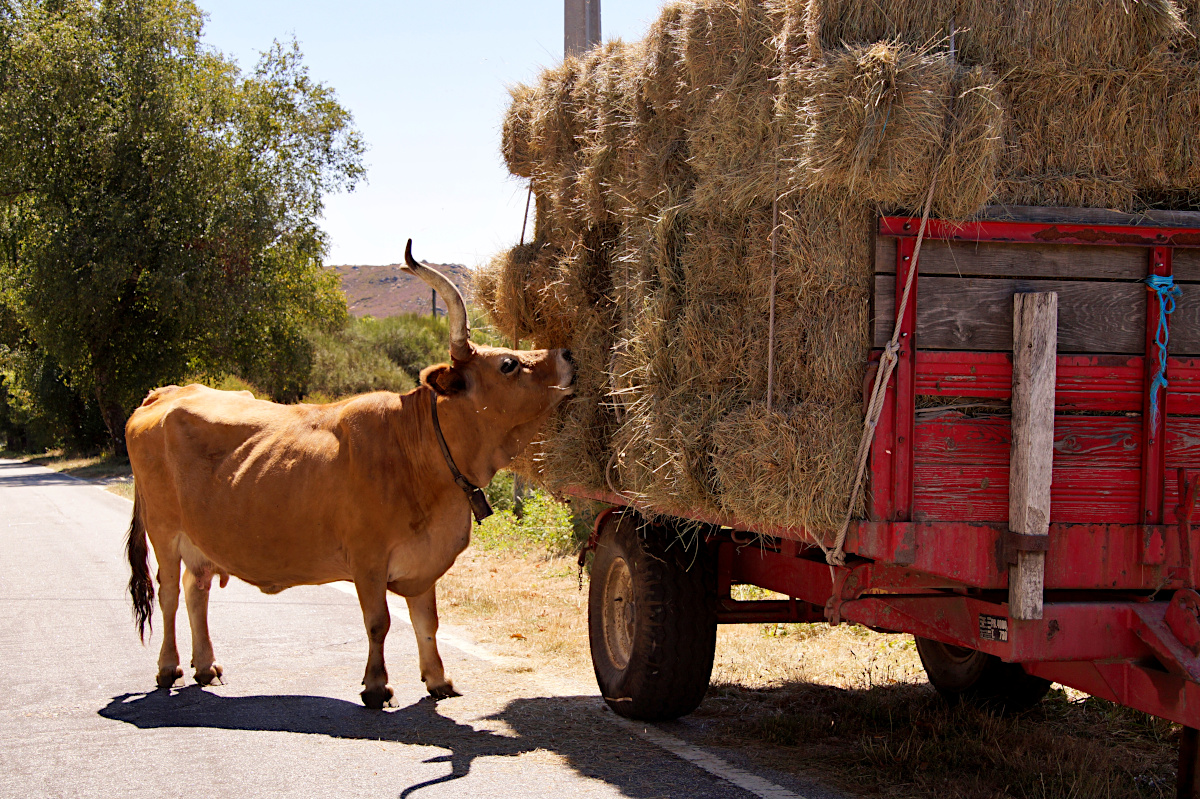 We see grazing herds of Cachena breed cows on our way, with their characteristic light brown colour and long horns. The Cachena sometimes force us to stop the car, like this one for example, as it blocks the road to enjoy a snack of hay. But sometimes the Cachena cows just claim the road as their territory for no obvious reason, and sometimes just because they feel like crossing over to the other side of the road where the pasture looks better. 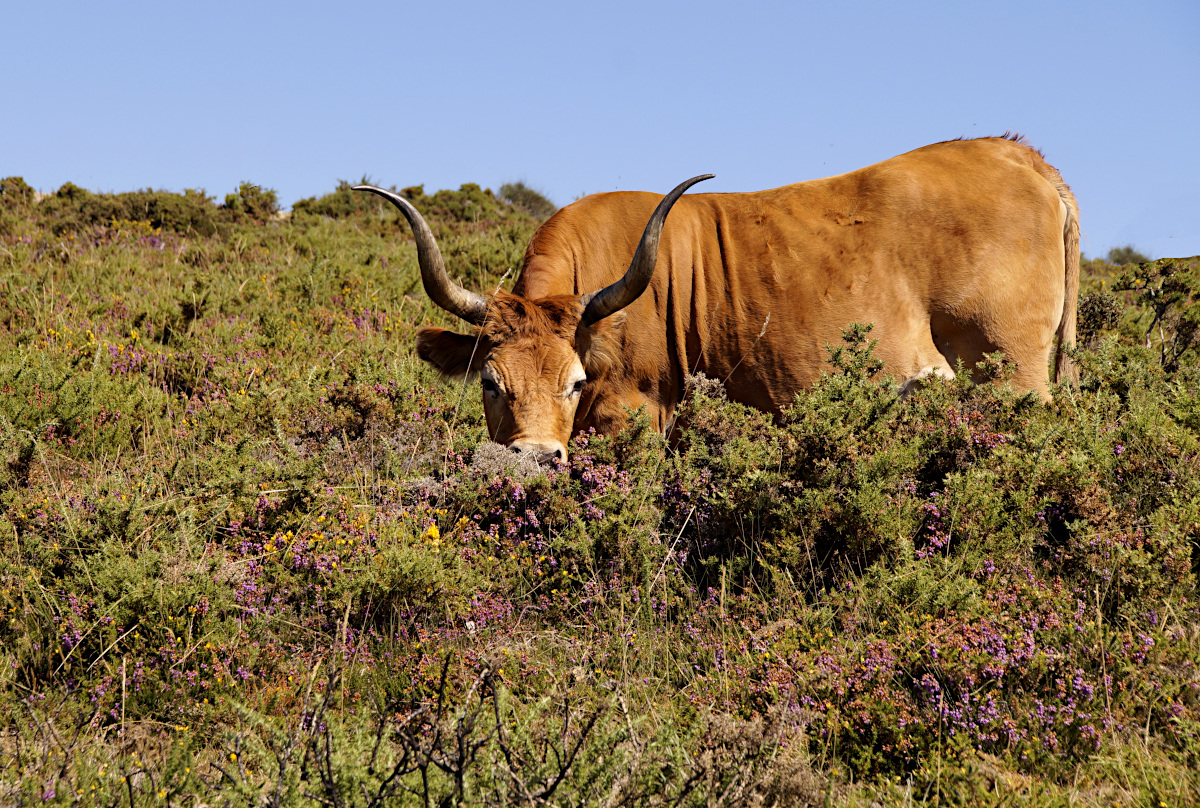 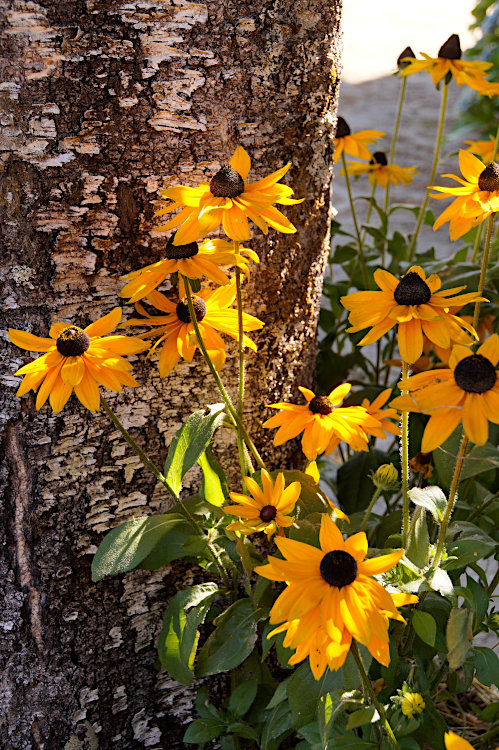 We turn of road 503, just outside of the national park, and the views in front of us are gorgous: we are surrounded by the mountains Serra da Peneda, at a height of 1100 meters. And as soon as we arrive at the village, we are thrown back in time, far, far back in time.

On the north-western side of the Peneda-Gerês National Park, on the slopes of the Serra da Peneda, time seems to have stood still for the past 800 years in these two tiny villages of Branda da Aveleira and Branda de Santo António.

I am instantly embraced by a unique feeling of calm and tranquility when stroling leisurely around in this place, a village that is lost in time and forgotten by many. An emotion of peace and quiet overtakes me, of leaving the hectic life behind, of just being, here and now.

What originally was planned as a short stop on route, turned into a long leasurely walk. We took our time to sit down and reflect for a while: appreciate the stillness, and listen to the silence. I was so glad that we did. We were here for only a few hours, but I could have stayed here so much longer. Lost in time, but found peace and tranquility. 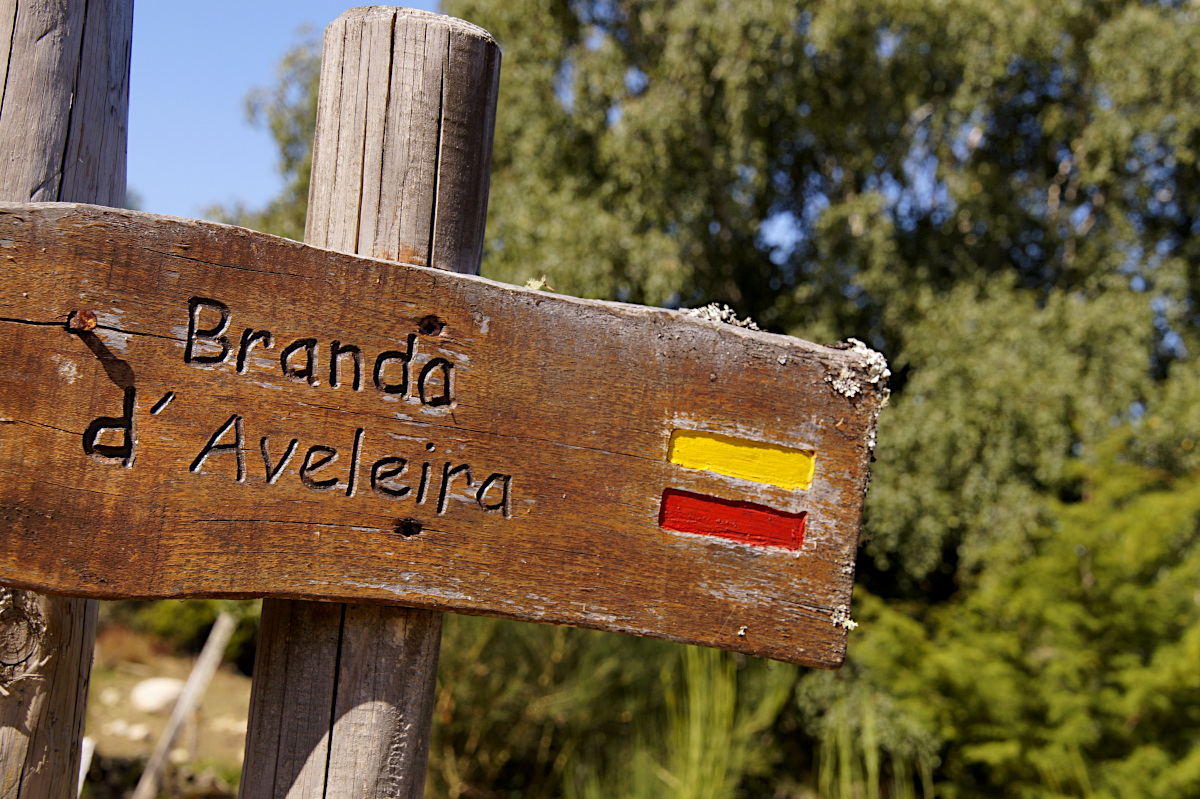 The first village we visit is called Branda d'Aveleira. This is the one closest to the National Park and I guess also the one that is the most known one of the two. While we cross the bridge into the village we pause a minute to enjoy the babbling sound of the river and I soak in the enjoyable surroundings during this warm sunny summers day.

The village of Branda da Aveleira has been used since the 12th century, and it is the home to a typical style of houses from the region called 'cardenhas'. These cardenhas are so unusual and unique looking, definately not something I have seen before! Although it remotely reminds me of the 'trulli' in the town of Alberobello in the south of Italy; a traditional Apulian dry stone hut with a conical roof. 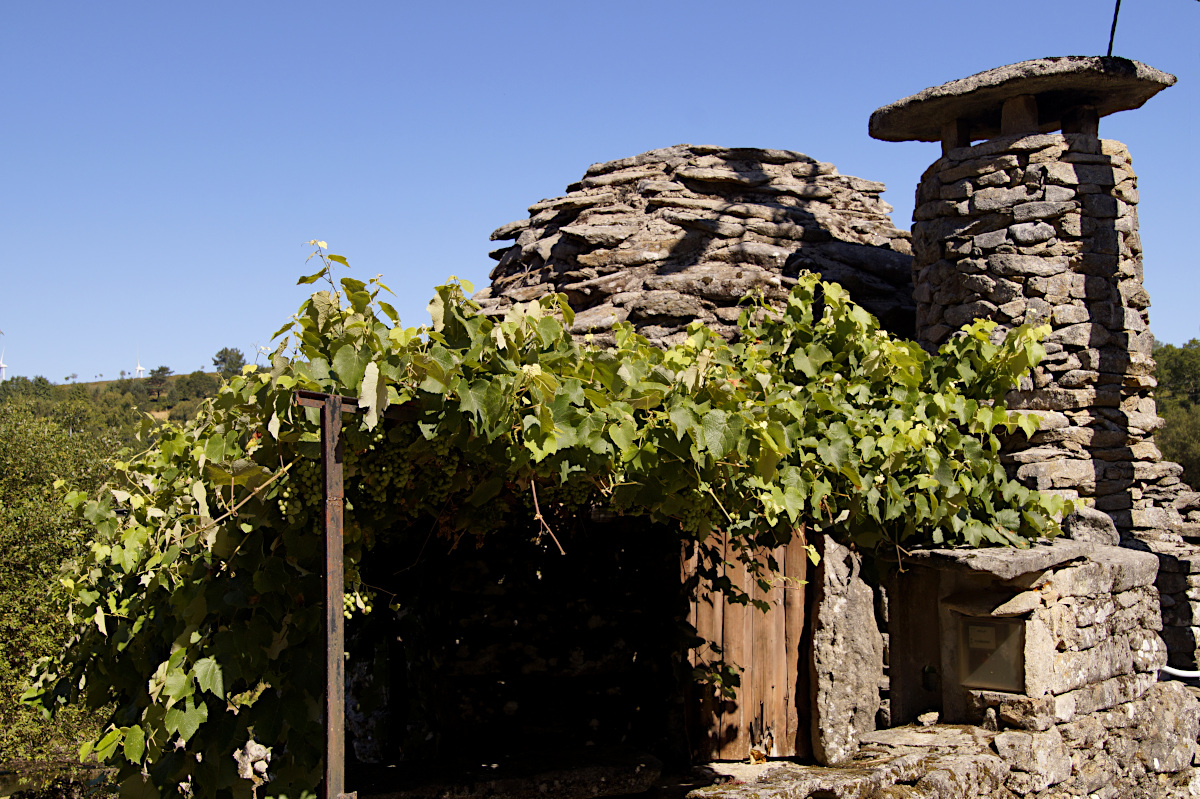 In the photo above you can see one of these cardenhas overgrown by vines. "Cardenhas are small rustic stone houses where shepherds used to sleep during the summer months. But this is not the only cardenha here; there is a significant number of these cardenhas, some of them well preserved, others abandoned and some that have been adapted to residential houses. 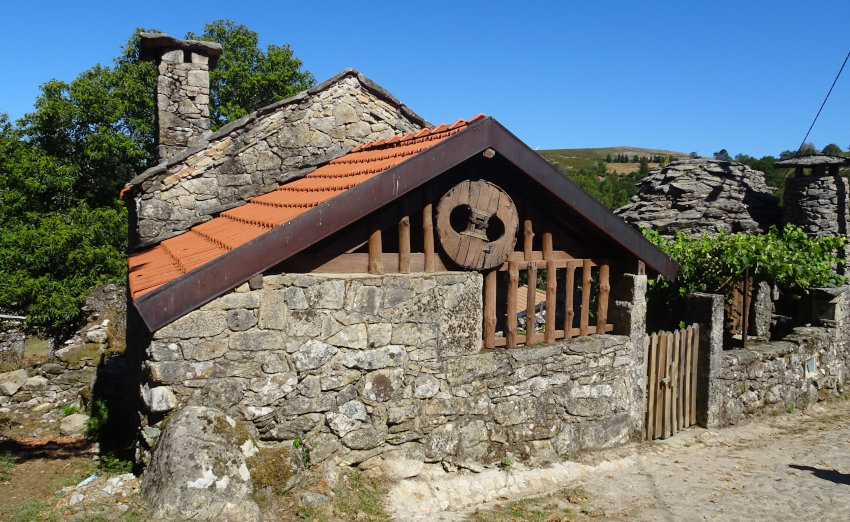 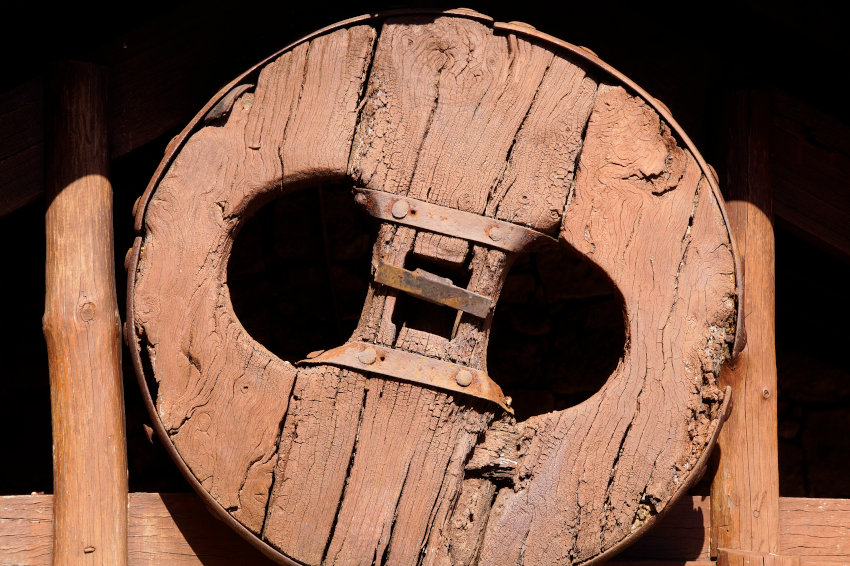 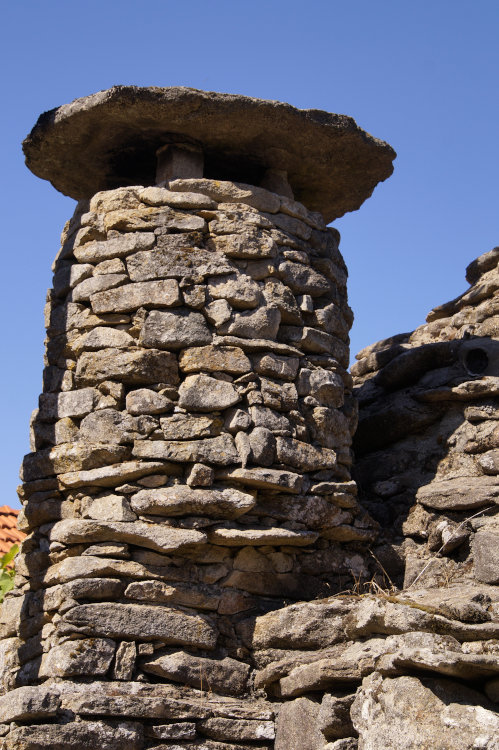 I loved walking through its narrow alleys, and along the granite walled paths and soaking in the atmosphere and seeing those rustic and typical build houses and chimneys. Today the village has few people and there are very few shepherds. The village actually came to be almost abandoned in the 1970s.

One would have thought these villages would be more popular with tourists, with their unique houses and located so close to the National Park. But this is not the case at all. There is actually no one here on this sunny day, just us. There are no shops here, no restaurants, no nothing. Here, in the middle of the mountain's grandeur, peace, tranquility and silence prevail. And I truly hope this place will stay the same for centuries to come. 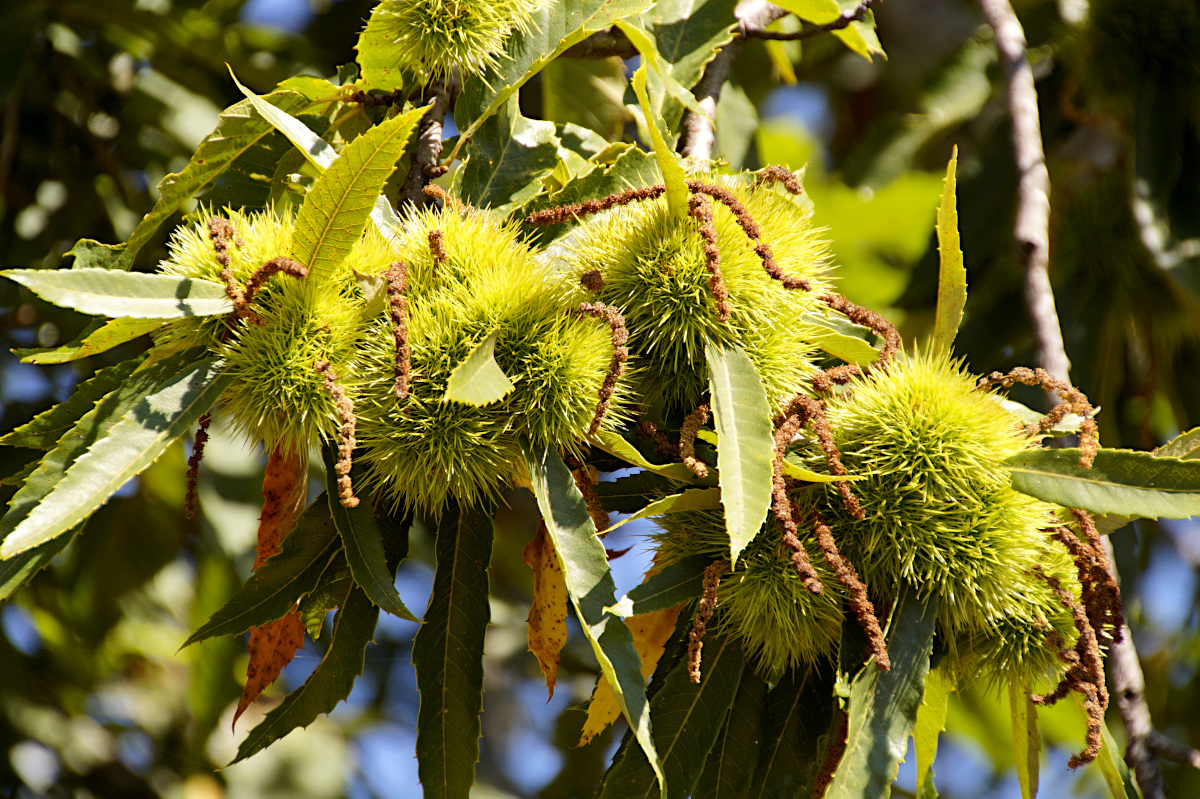 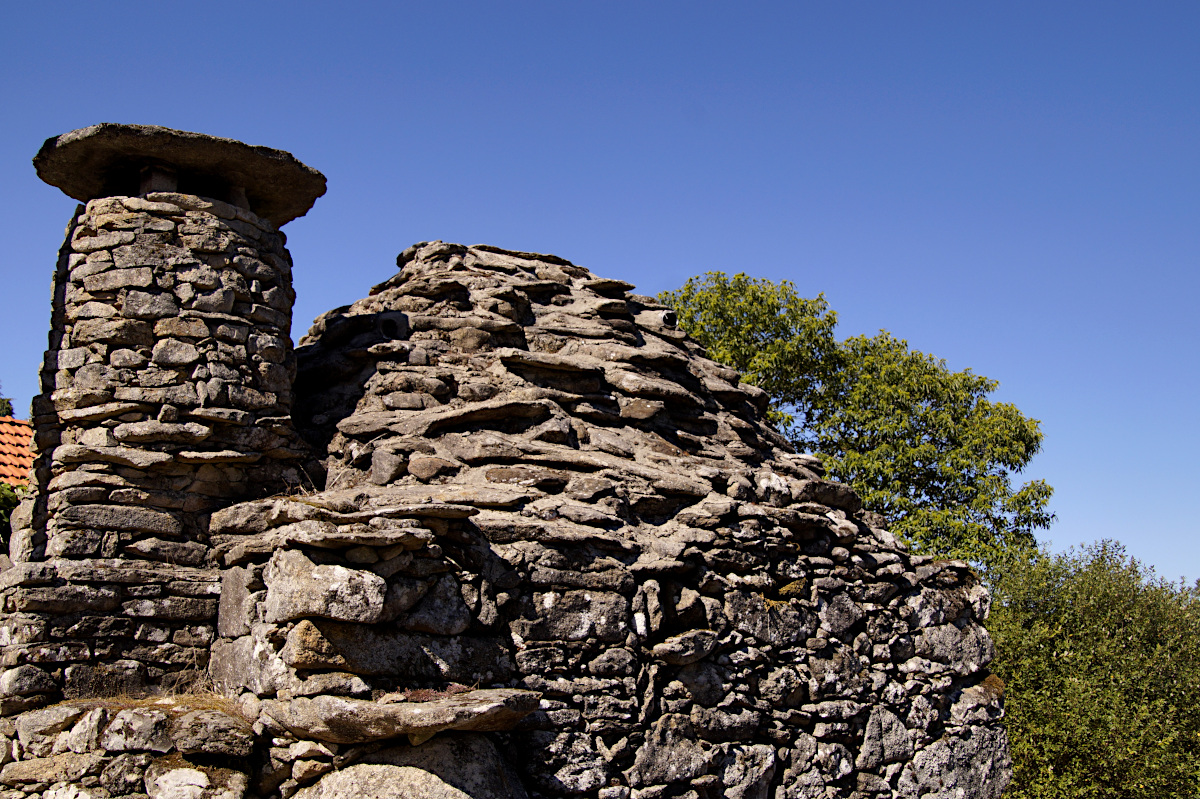 Brandas, are small mountain villages, on the high part of the mountain, which were used during the summer months by shepherds (brandeiros) in search of greener pastures for cattle. Here they had their little shelters: "cardenhas".

This is part of a tradition that was usual throughout many parts of the world; also called "transhumance": a type of pastoralism or nomadism. I think it is easiest to explain as a seasonal movement of livestock between fixed summer and winter pastures. In mountain regions, like here, it is a form of "vertical transhumance": a move between higher pastures in summer and lower valleys in winter. The herders have a permanent home, typically in valleys. Generally only the herds travel, with a certain number of people necessary to tend them, while the main population stays at the base. 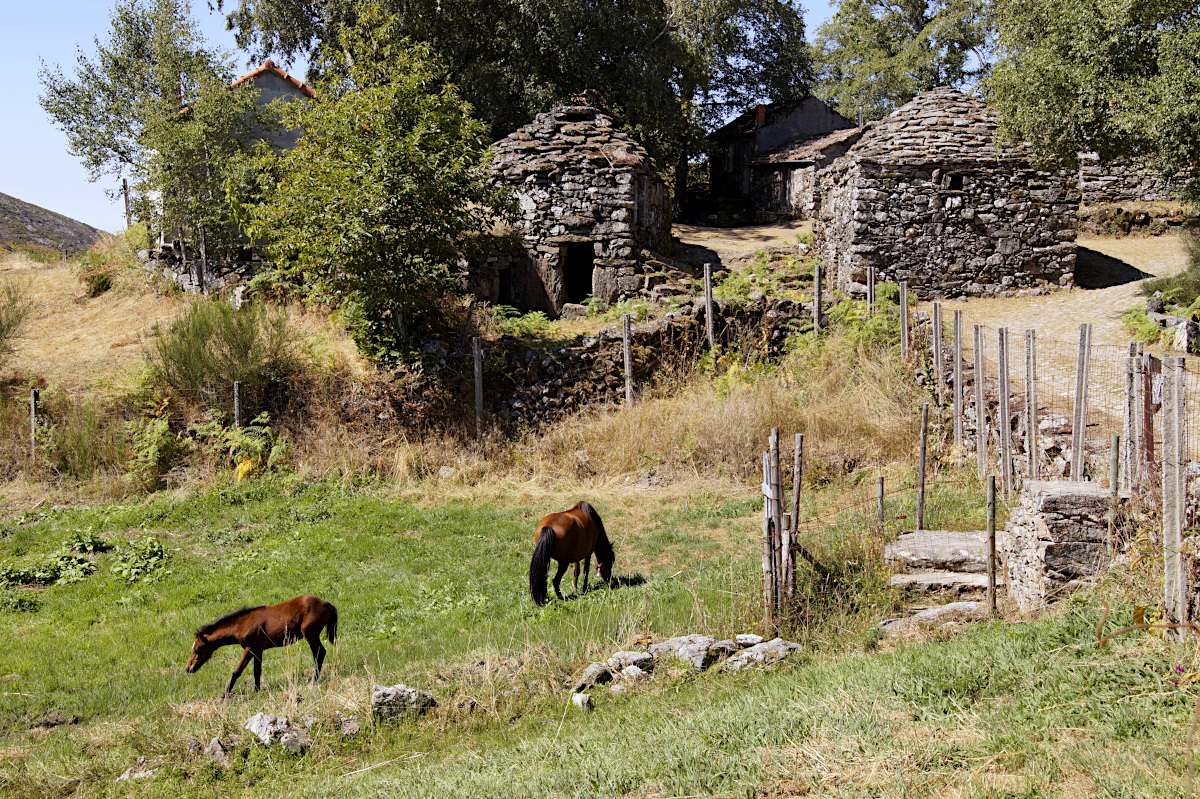 After having lingered around "Branda da Aveleira", we take a short drive to the second village, called "Branda de Santo António". And much to our surprise we are greeted by a group of semi-wild horses called "Garrano" on the edge of the village. Most Garrano horses live in the wild in northern Portugal, particularly here in Peneda-Gerês National Park. Until recently they were on the verge of extinction, today the Garrano is a protected breed.

This second village is, if that even is possible, even more rustic and tranquile than the first. 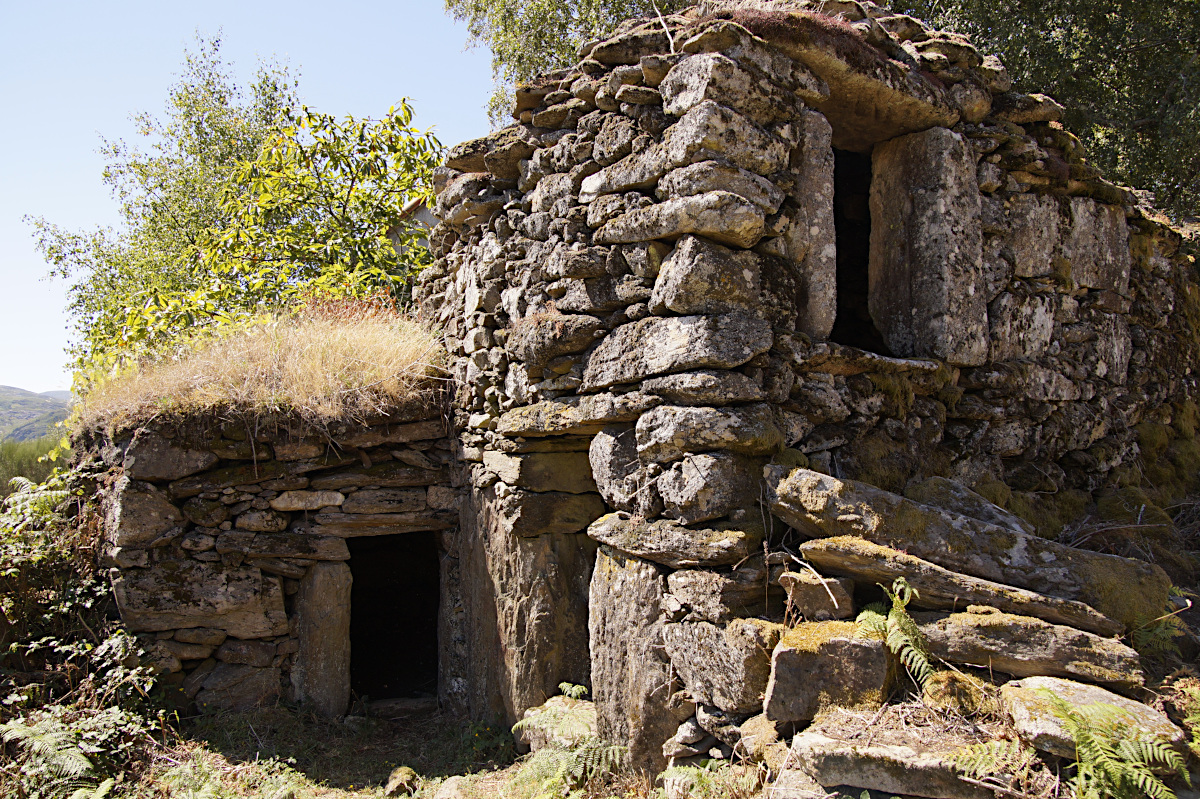 Branda de Santo António is another small village lost in the middle of the mountains. Considered by some as a village from the time of "Asterix and Obelix" and, by others, as the Portuguese Hobbit village, referring to the Lord of the Ring. I got associations also to the Smurfs. And looking at the photo below, it is quite understandably why. But, in reality, this village is yet another of the many brandos existing in Alto Minho. 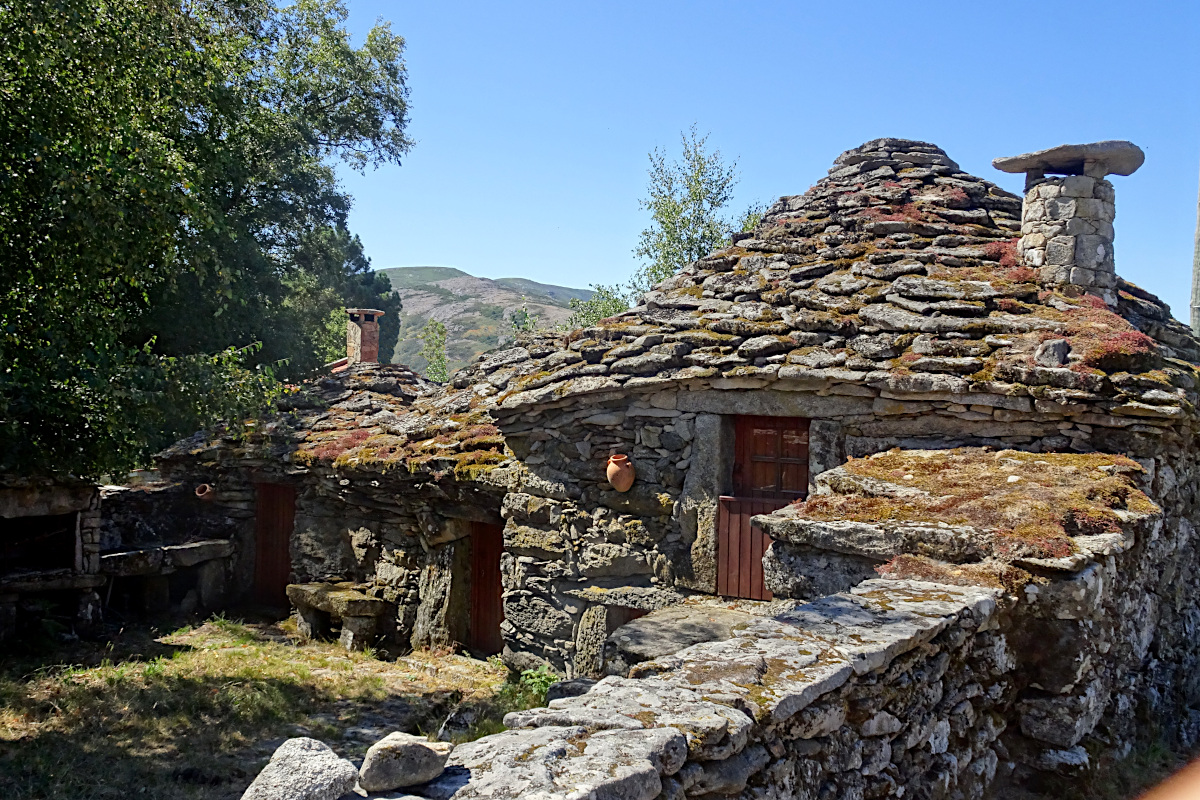 Cardenhas, small granite shelters, are crude and rudimentary constructions. Its architecture is very basic, possibly dating back to the 9th century. However, its construction is more complex than it may at first appear. The walls are made of dry stone masonry (without mortar), and the doorways and windows are formed by slate slabs. The cover of these cardenhas is made up of a false dome, built in overlapping rows of shale and covered by earth, where vegetation grew which helped to make it waterproof. There are cardenhas with one or two floors.Those with only one floor were intended to shelter livestock and the two-story buildings served as shelter for the brandeiro on the upper floor and for cattle on the lower one. Having the cattle on the lower floor helps to keep the upper floor warm. 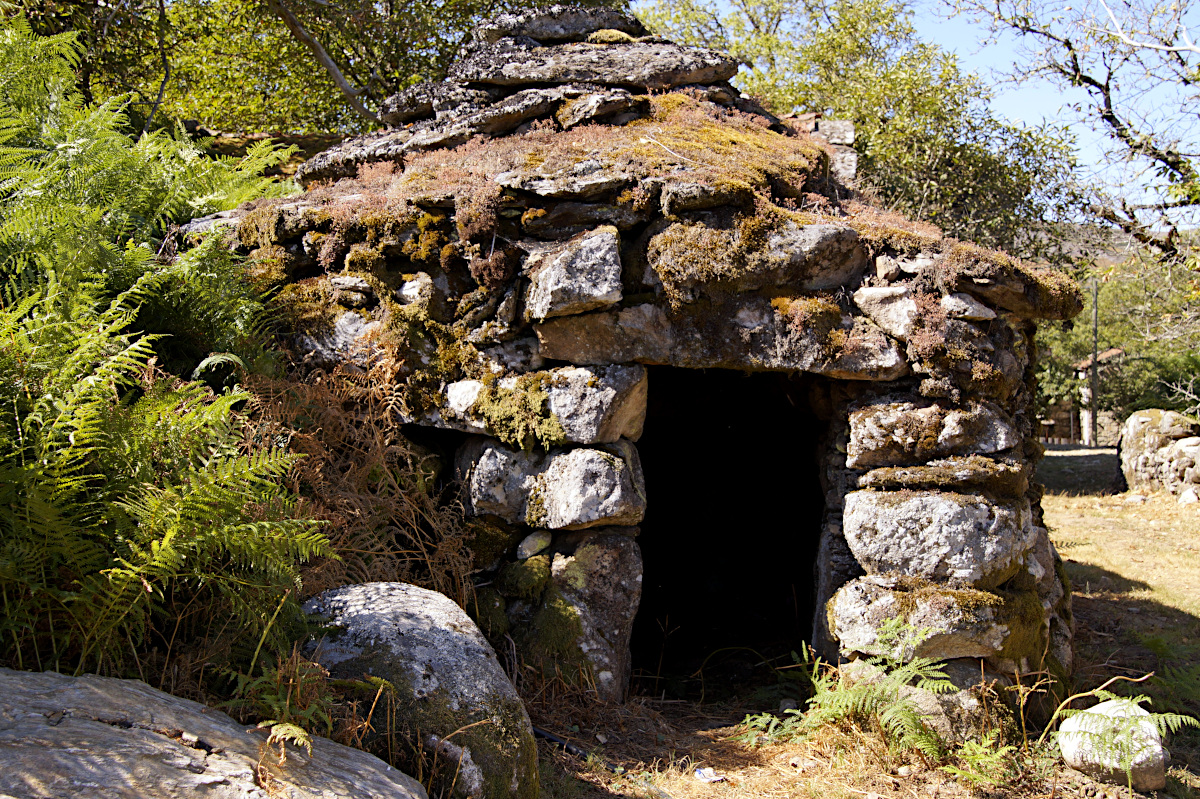 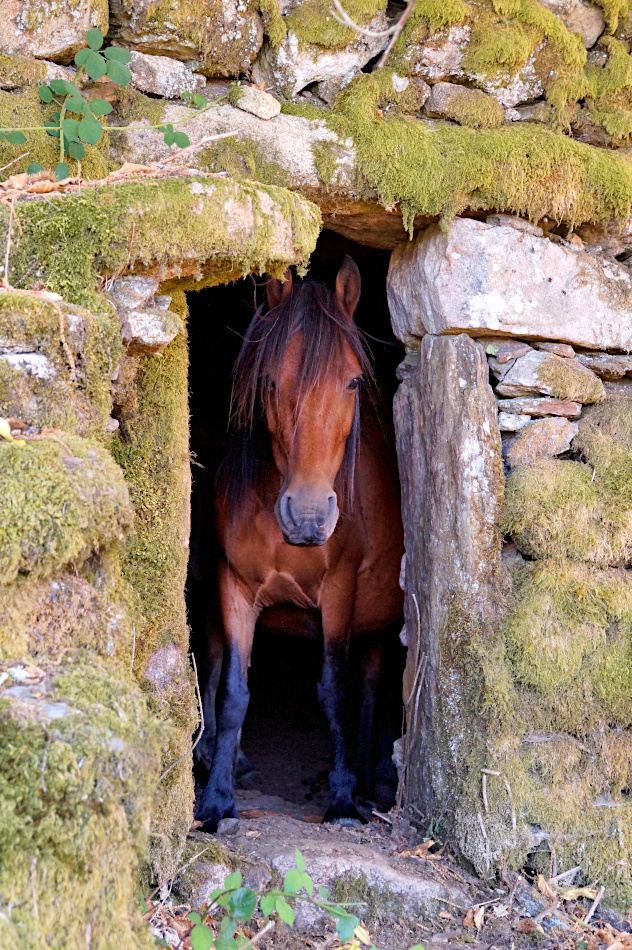 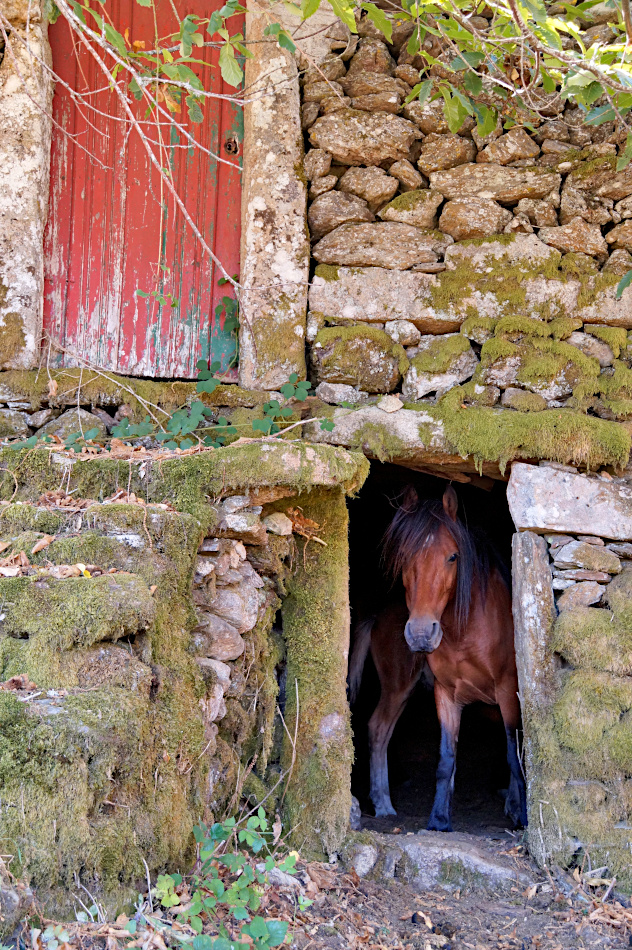 Walking through the village, we suddenly noticed that one of the dwellings was not empty. The semi-wild Garrano horses were taking shelter against the intense heat of the afternoon sun. If you look closely you can see that there is a foal hiding behind the mother. The mother curiously came outside to see who was "visiting" her home.

We didn't want to disturb them too much so we kept a distance from the dwelling and left them in peace and continued our pleasant strole through the village. The Garrano is a breed native to the north of the Iberian Peninsula and which was considered by the European Union in 1994 to be an endangered breed. 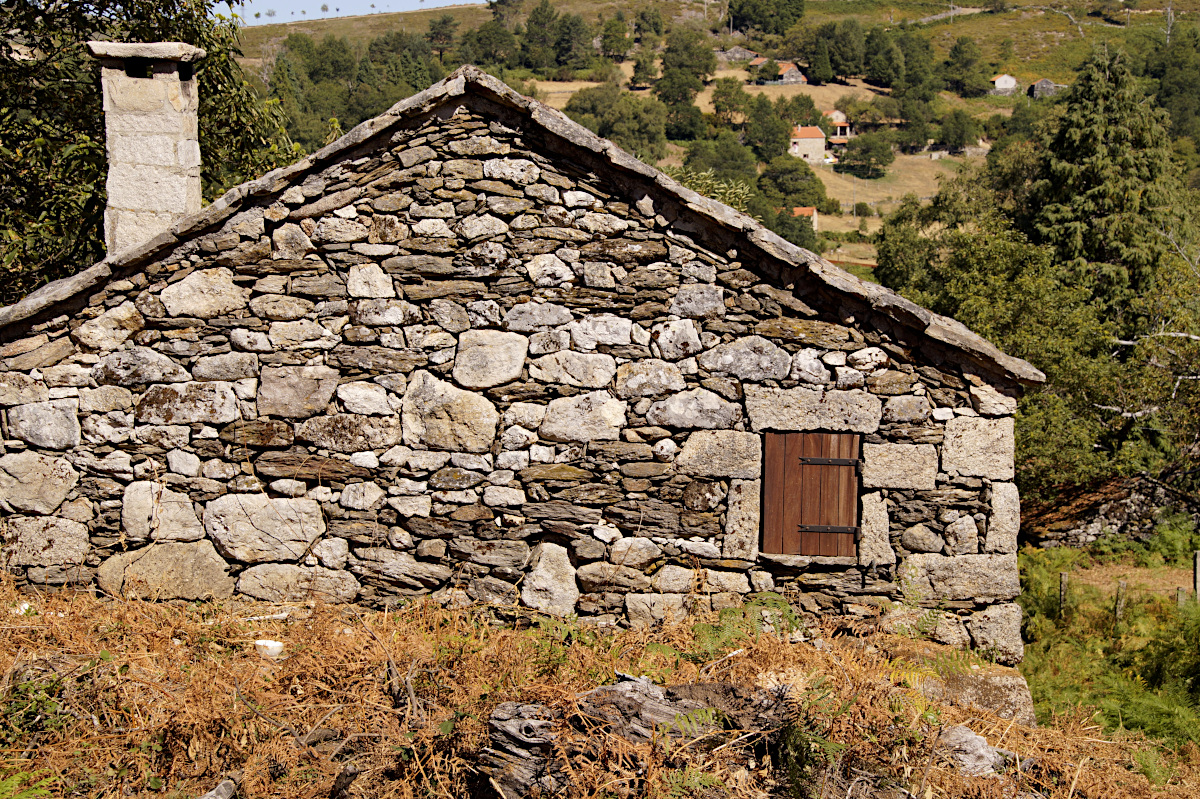 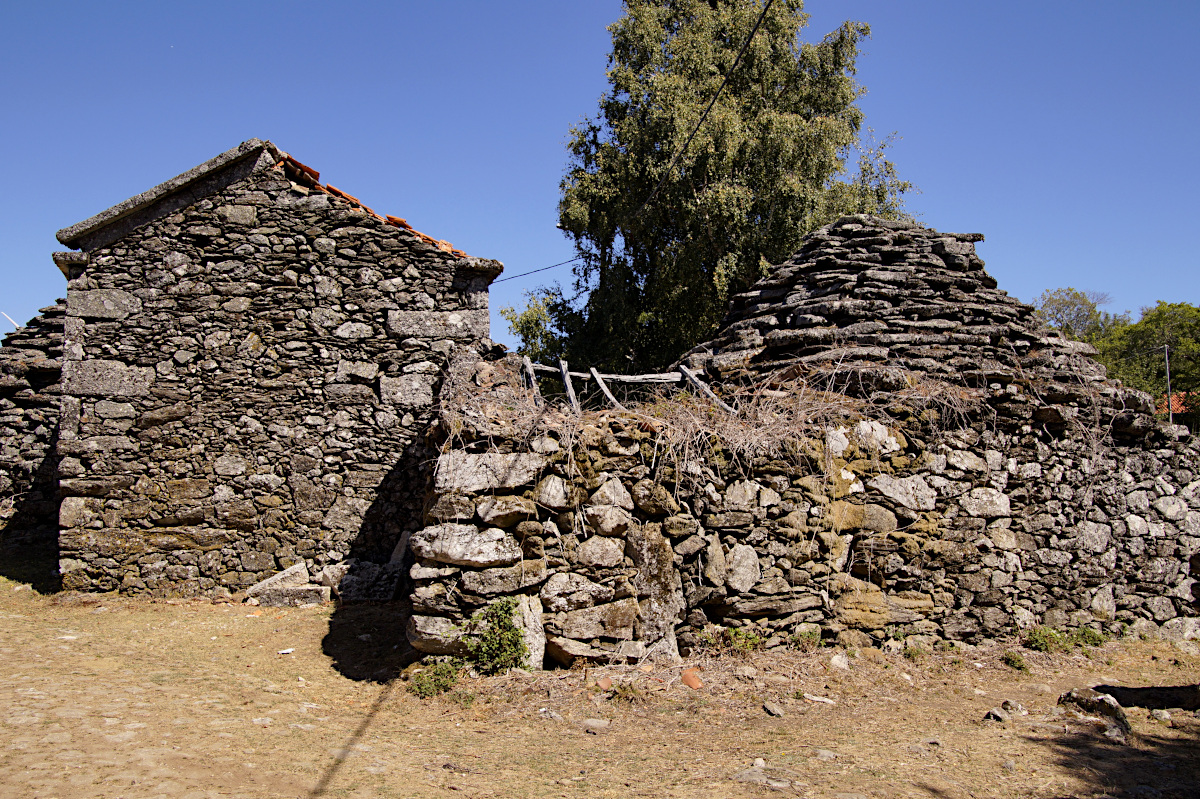 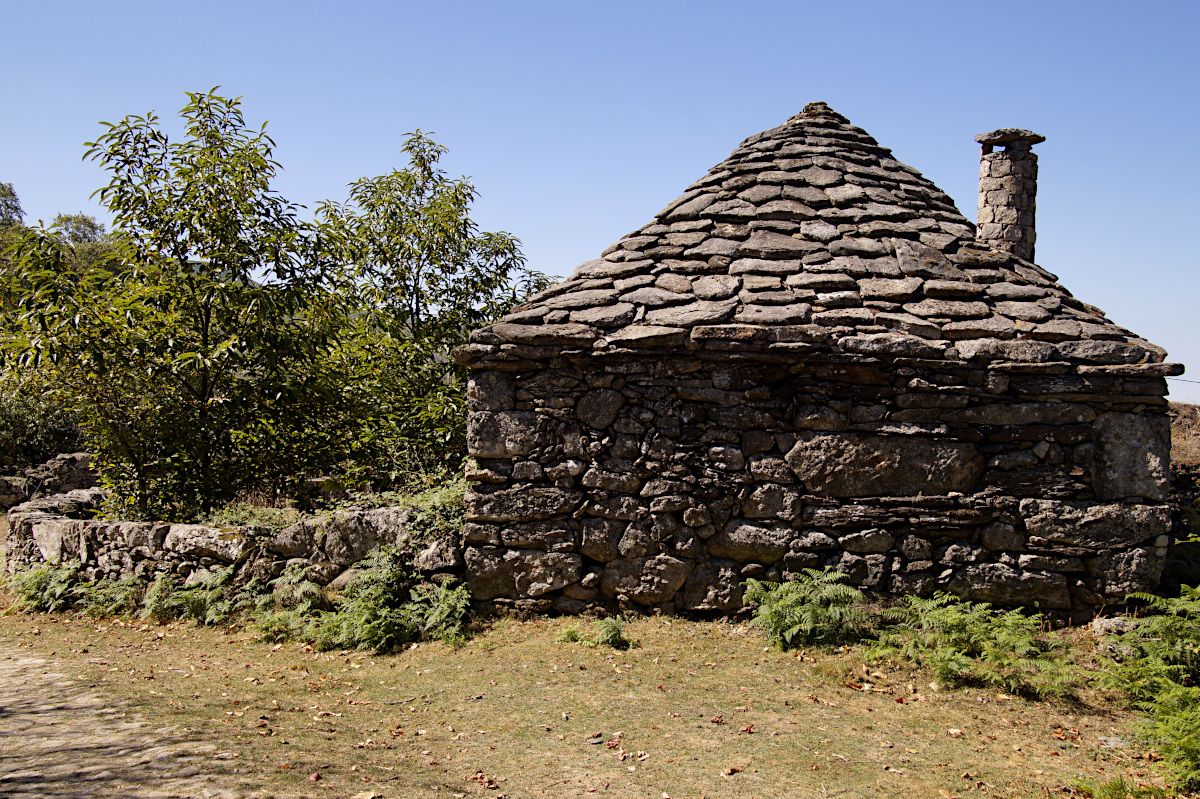 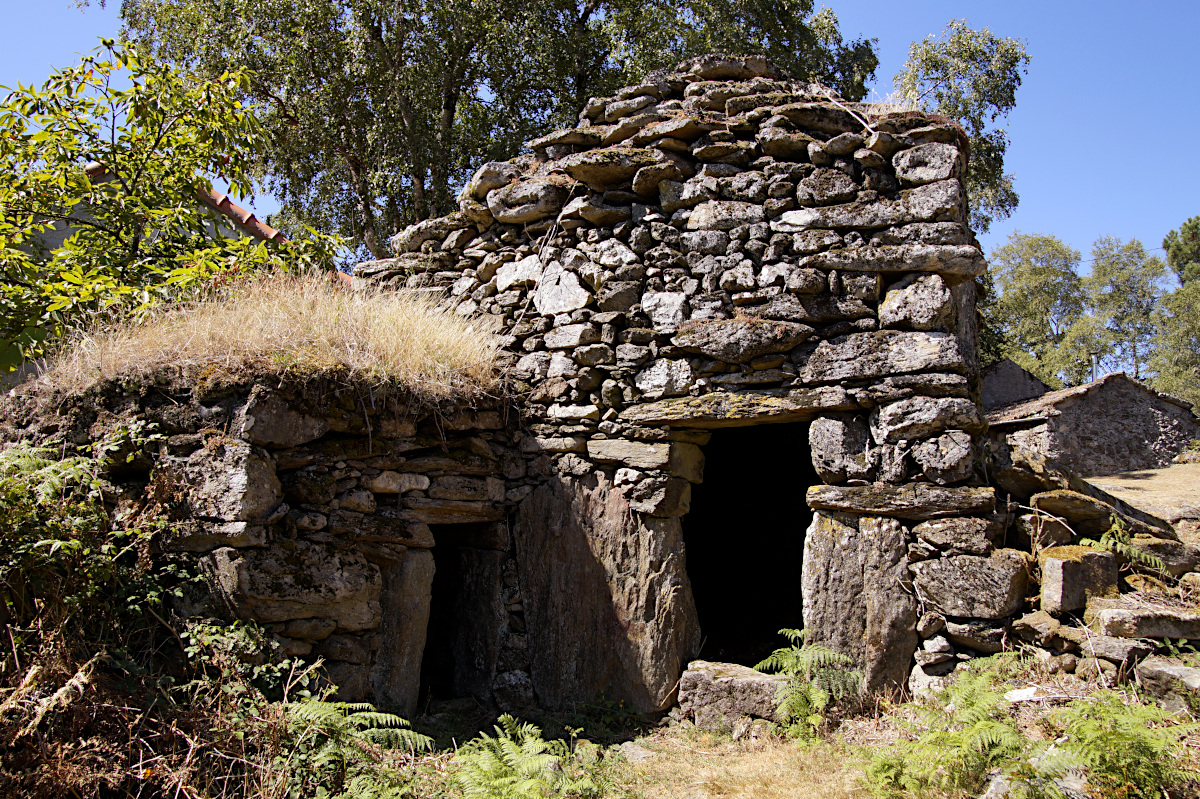 There are actually quite an impressive number of dwellings remaining in Branda de Santo António, although some were quite dilapidated, but nevertheless fascinating to see.

It is a hot day today, but one can imagine how cold it is during winter and spring in this area, with the mountain peaks remaining covered with snow for long periods of time. This has forced the inhabitants of this area to adjust their particular way of life. Tradition was that every year in May, since at least the 12th century, the brandeiros (shepards) of Freguesia de Gave go up to the mountains with their cattle to graze. The cattle were mainly sheep, horses and goats. By definition, Branda is a place where time is spent during the summer, when the weather conditions are more 'brandas' (soft) as opposed to wintertime when the weather is tough and the shepherds return to their homes in the village. According to tradition, the brandeiros remained on the mountain during the summer but some of them would come down to the village to attend the Sunday mass and bring some food to the Branda. 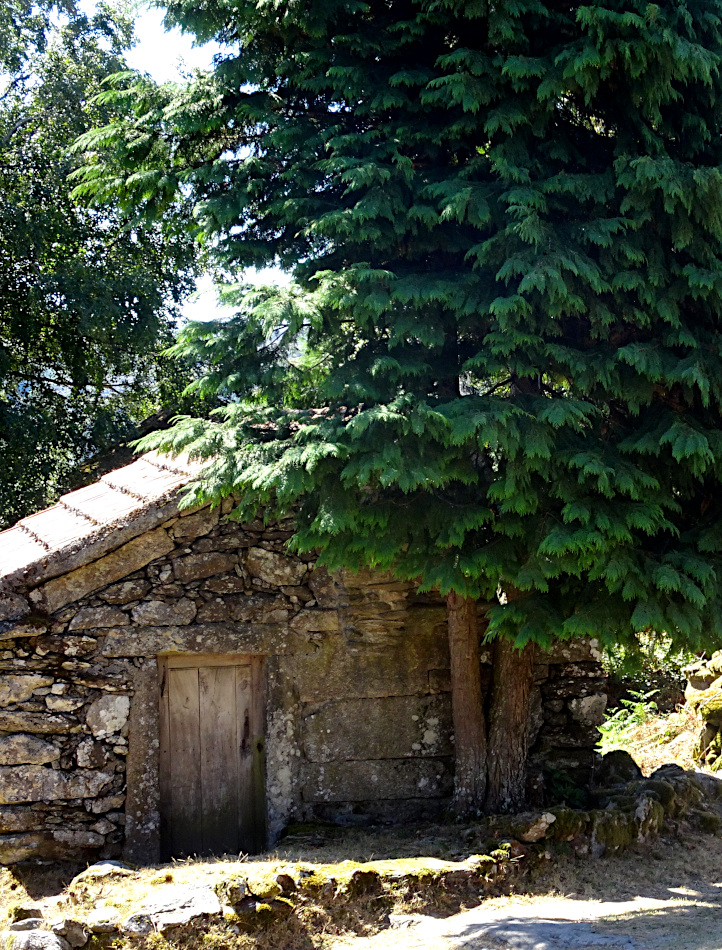 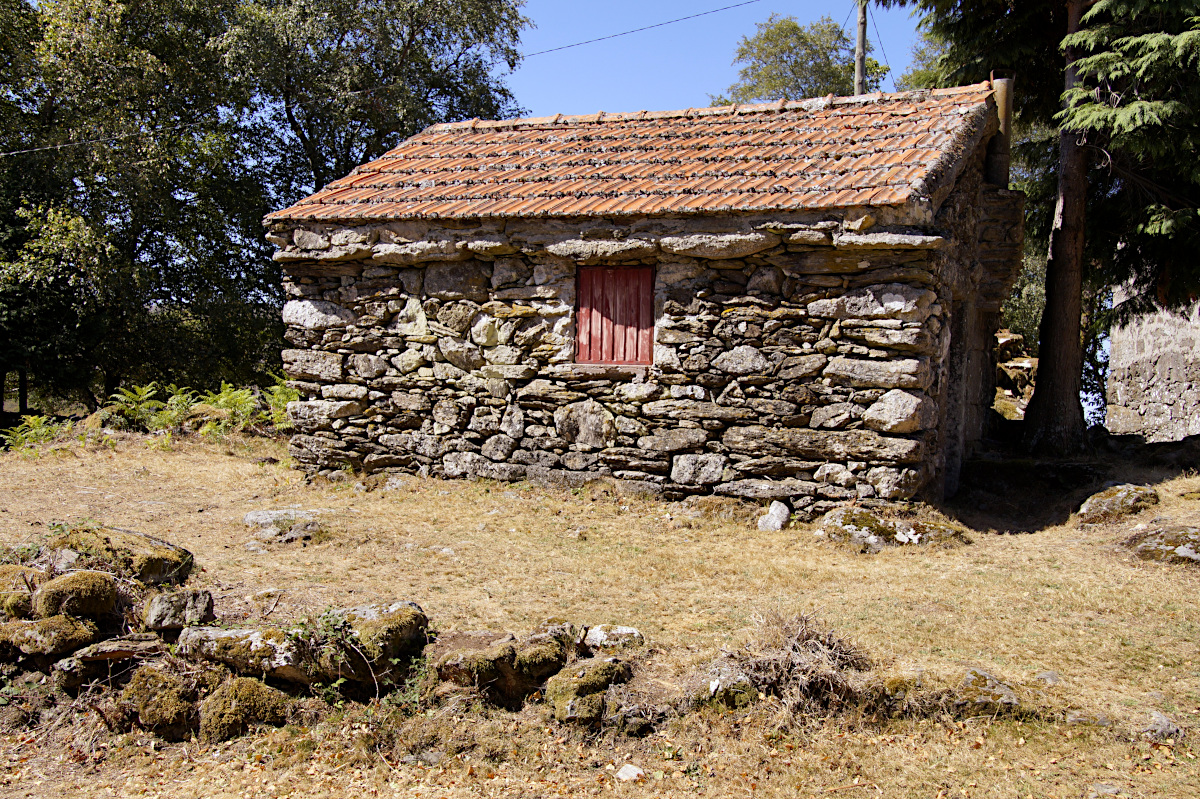 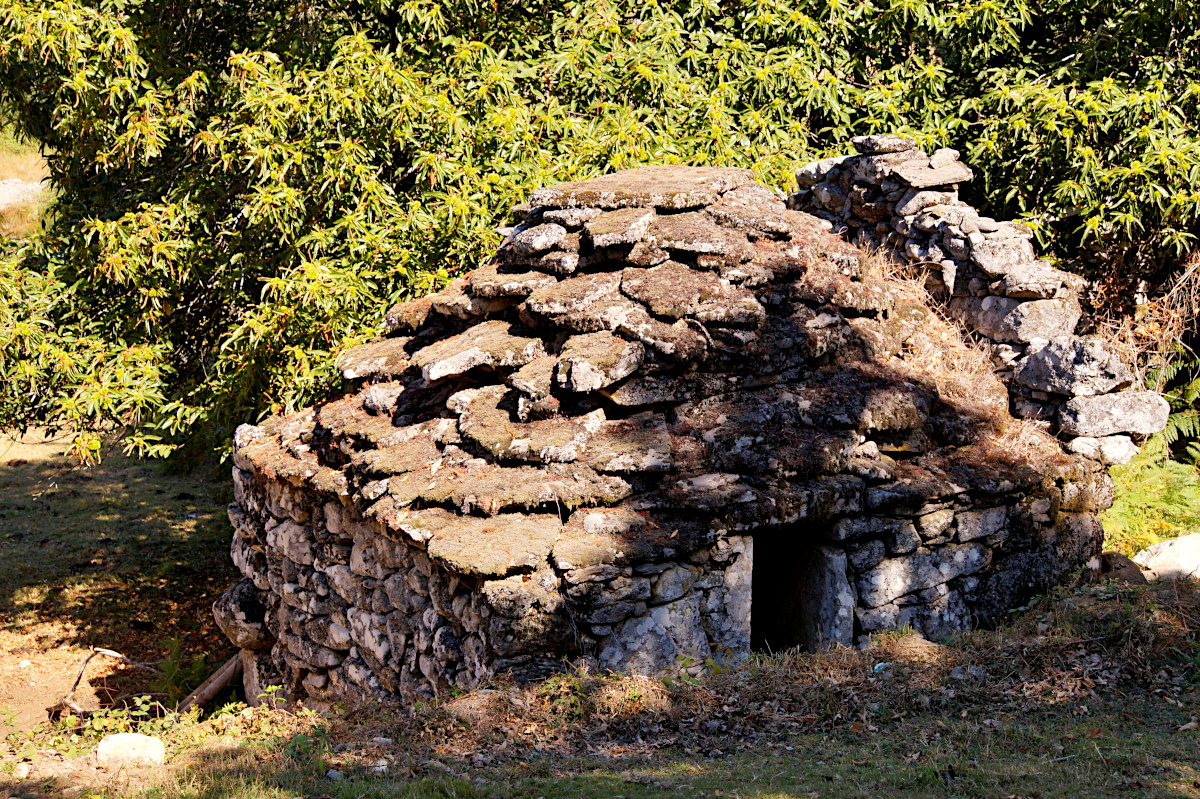 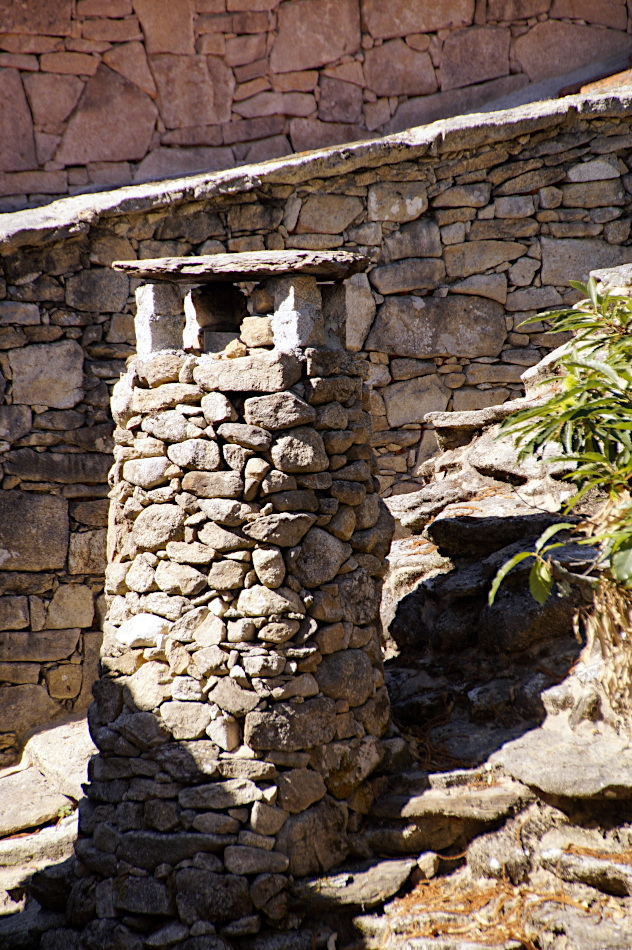 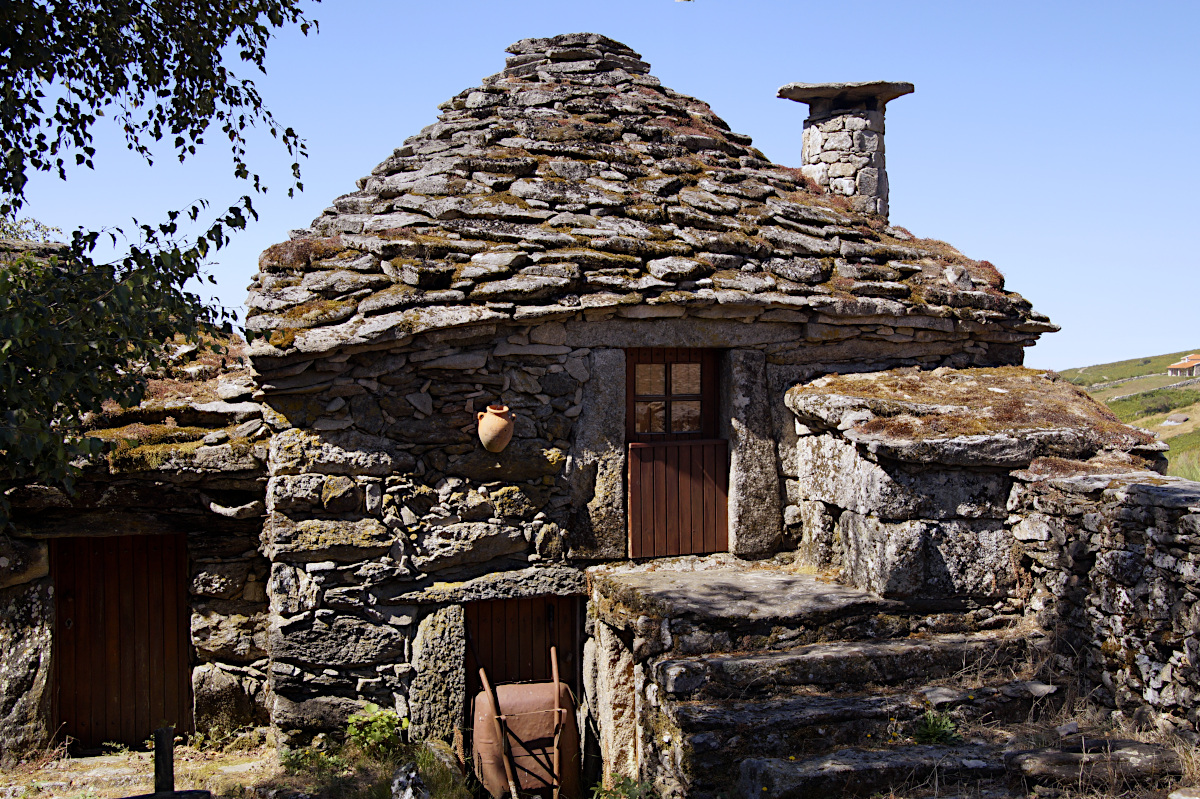 The brandos: A place that has stopped in time. It is a magical place, full of charm. Here time passes slowly.
And although maybe not a 'tourist destination' fit for all, I really loved it!