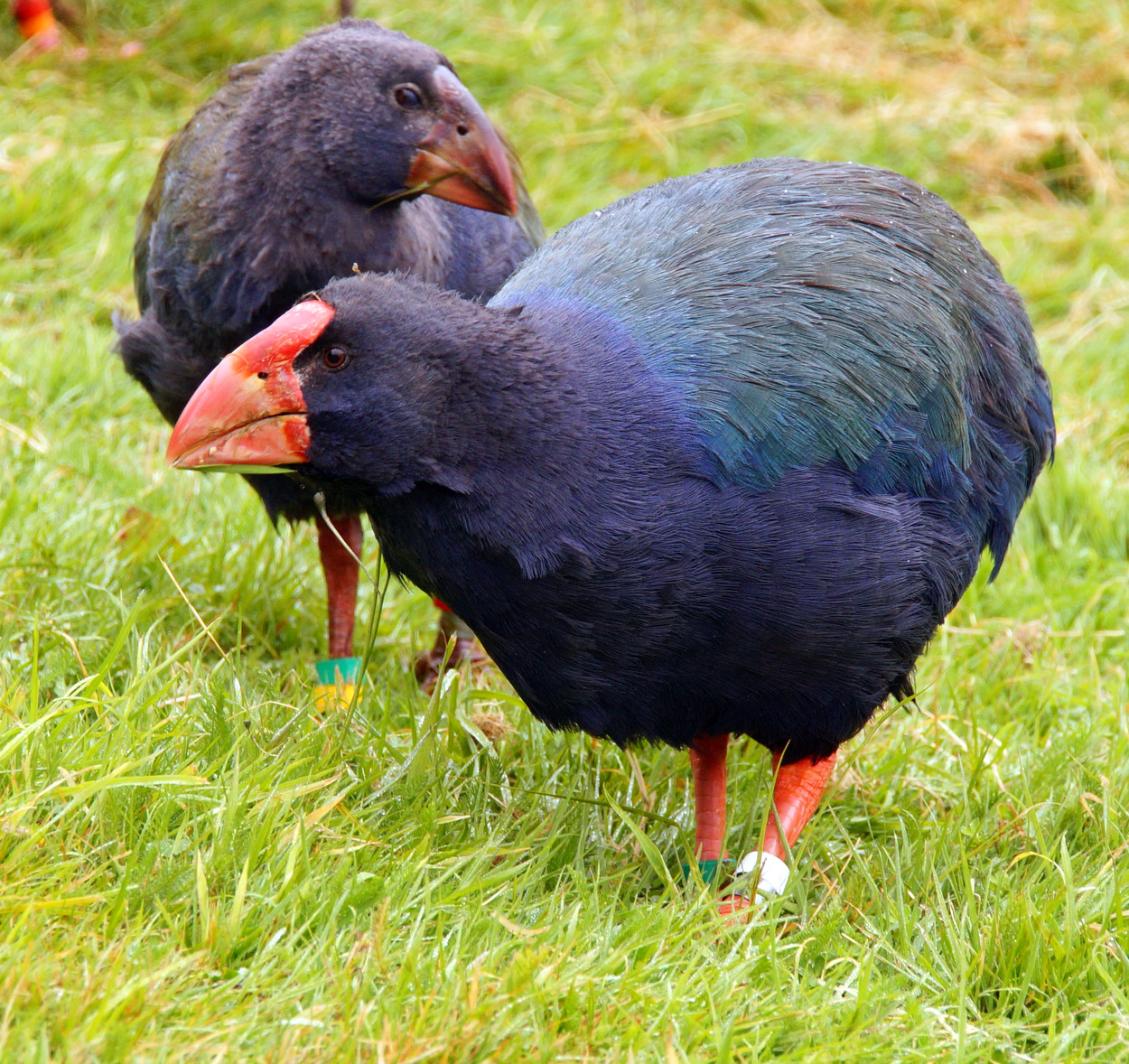 Ever heard of the Takahe? A mystic bird that cannot fly, is bright in colours, and looking almost prehistoric? We are about to discover more about this bird at the Takahe Bird Sanctuary. 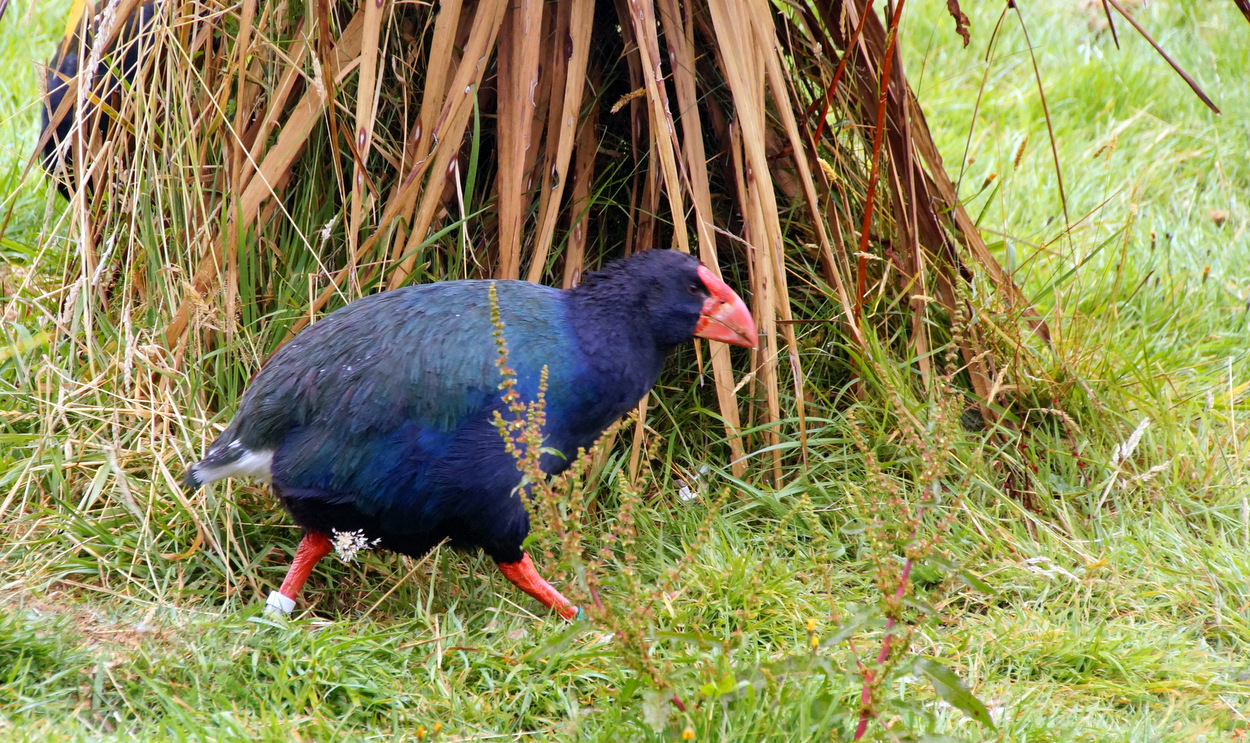 It is early morning and we are packing up to leave the Fjordlands and Te Anau. We had two fantastic sunny days here, totally against the odds, as this area is known for its number of rainy days. And today is such a day, with a little drizzle hanging in the air.

But we are not totally ready to leave Te Anau yet; there is one final destination in the Fjordlands on the agenda, and that is a visit to the Te Anau Bird Sanctuary. A visit I have been looking forward to quite a bit, for here you can see a bird that was previously thought to be extinct: The Takahē. A mystic bird that cannot fly, is bright in colours, and looking almost prehistoric. And a bit of rain is not going to stop me from seeing this rare bird-species.

The best time to visit the sanctuary is during the morning, when the birds are being fed, and you can see them up close. Feeding time is 9:30 according to the website (during winter an hour later), and we managed to be here well on time. The parking lot is almost empty, and when walking into the bird sanctuary it didn't look all that impressive. I am getting slightly nervous; hopefully I will be able to see these birds that speak so much to the imagination. 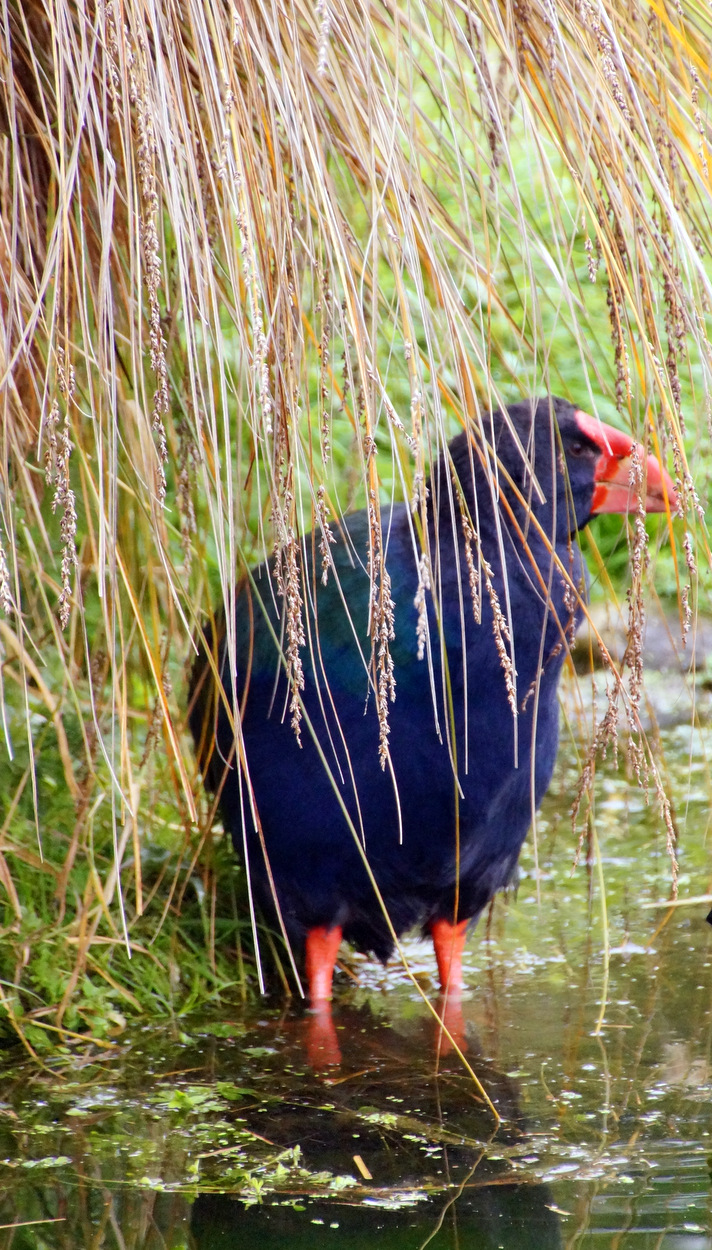 The Takahē bird, or more specific called the "South Island Takahē" (Phorphyrio Hochstetteri), was thought to be extinct after the last four known specimens were taken in 1898. Luckily this bird was rediscovered in 1948 after a carefully planned search effort by Geoffrey Orbell.

This nearly extinct species is still very much endangered; nowadays there are only approx. 340 Takahē birds alive in the world. And seeing three of them together was quite special!

The Takahē is the largest rail in the world, and indigenous to New Zealand. A male weighs about 2,7 kg, and a female, which is slightly smaller, weighs 2,3 kg. In height it is around 50 cm and length 63 cm.

I have to admit that after coming back from my trip, I have been reading a lot more about this almost extinct bird. And stories of saving this bird for the next generation go between hope and despair. There are some success stories, and the number of Takahē have increased. But finding a place where the Takahē can live and prosper is tough. It's natural habitat is alpine grasslands, where it eats grass, shoots and insects. But the introduction of red deer (Cervus elaphus) represent a severe competition for food, while the stoats (Mustela erminea) take a role as predators.

The last wild population of approximately 130 Takahē is in the in the alpine grasslands of the Murchison Mountains, close to where we are now. 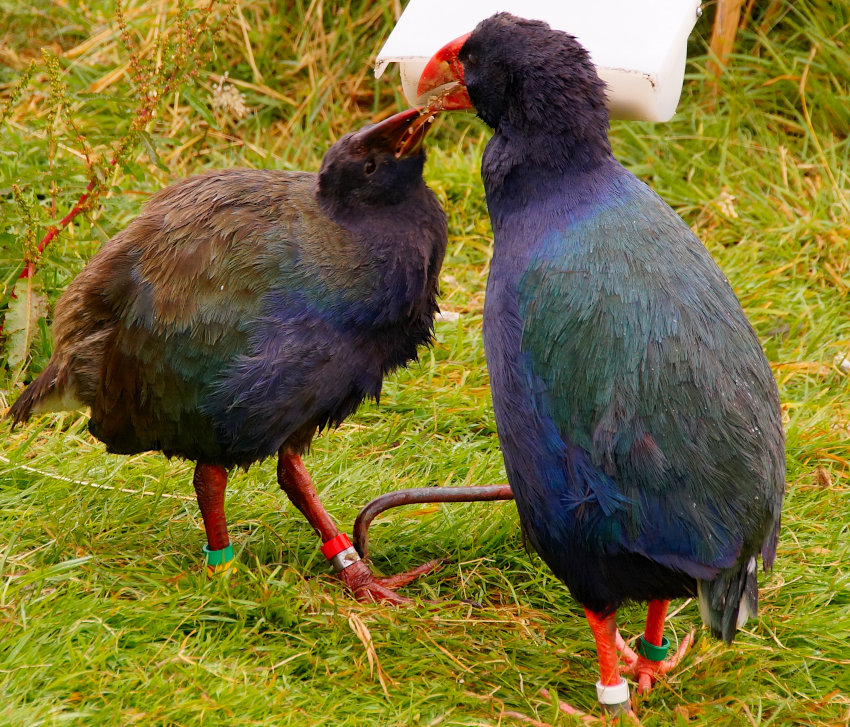 Together with the guide, and a handfull of other visitors, we went into the enclosure where the Takahē live. At once the birds came out of their hiding and rushed to the feeding area. The Takahē were so close to me that I could almost touch them!

Feeding time was a real fun experience. The two adults ate from the feeder, opening the feeder with their very strong beak. The young however was fed through regurgitation (clearly seen in the photo above).
The adult on the right is called "Tumbles". Tumbles was raised from an egg collected from a wild nest in the Murchison Mountains. Tumbles got his name because of the way he tumbled around with excitement at feeding time :-) They say he is still first to the feeder nowadays, but doesn't tumble anymore as he used to. And well, he was first on the day we were there during feeding time! And also the one least camera shy, as most photos I took there are actually of Tumbles.

The young you see in the photo is not a chick of Tumbles, as the pair of Takahē in the sanctuary cannot have chicks of their own. But Tumbles is a great foster parent!
The egg is from another Takahe couple (that are a pair for live). In the attempt to increase the number of Takahē birds, they put the eggs of breeding Takahe couples with foster parents (that are not breeding). The breeding pair will lay new eggs, which increases the number of eggs and Takahē birds per year. Although the foster parents are not breeding, they do have great parental instincts and take care of the new young as it would have been their own.

We took some short videos during our visit, and above you can see a short section of the feeding procedure. On the left is the female called "Kawa", in the middle the young "Ehara" and on the right the male "Tumbles".

Takahē birds at Te Anau Bird Sanctuary. In front is "Tumbles" and behind the young "Ehara"

In the photo above you can clearly see the prehistoric look of the bird, with its strong impressive red beak, small round eyes, and strong red legs. The feathers are really beautiful in colour, they range from an iridescent dark blue head, neck and breast, to peacock blue shoulders and turquoise and olive green wings and back. And yes, they do have wings, but small ones, and only use them to display during courtship or as a show of aggression. These birds cannot fly.

You can see the young bird called "Ehara" in the back. The beak of the young is less vibrant in colour, and is more brownish. But the colour of the feathers is the main difference between and adult and a young, as young birds mainly have pale brown plumage. This young seemed almost fully grown however, and was showing half of the adult colouring.

In front is "Tumbles" and behind the young "Ehara". And by now you probably wonder how I can see so quickly who is who. Well, I don't really. The young is easily distinquished from the adults. But seeing the difference between the two adults isn't that easy, other than the slight difference in size. The trick to use is to look at their legs. Every known Takahē is uniquely identified by two rings around each leg. The combination of colours makes them identifiable and able to be tracked. 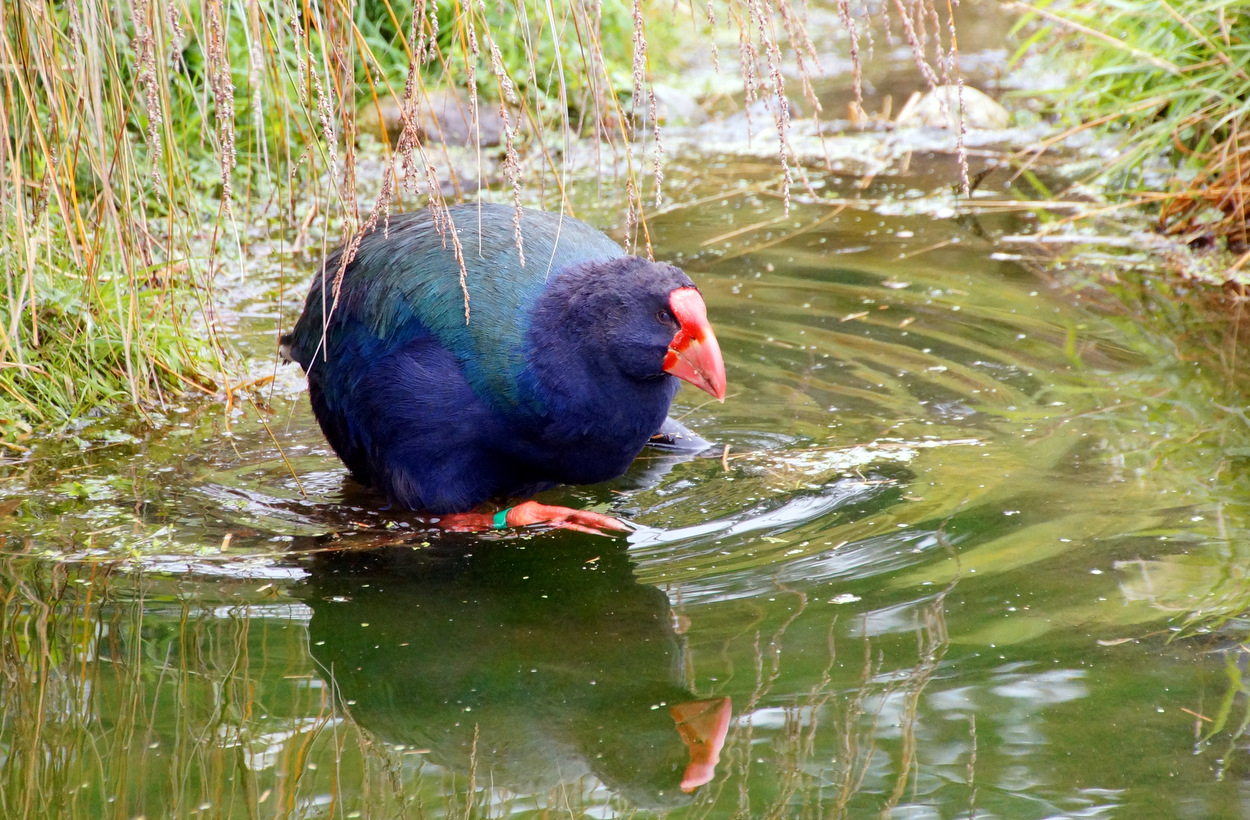 From the feeding area the birds went to the little pond / swamp area. They really looked natural in this environment. But this was also the sign that the "show" was over. It was time for us to say goodbye and leave the enclosure with the Takahē. There was no hurry though, we got some time to take some last photos of these mystic birds before we slowly left the enclosure.

But "feeding time" wasn't really over yet! Outside the enclosure a number of wild ducks were eagerly waiting for us. They knew that our friendly guide had spared some food for them and she feeded them some seeds while we walked from one aviary to another. The ducks were friendly and patiently waggling behind and beside us, happily quacking in agreement, and hoping for some left-overs. It was so cute to see! 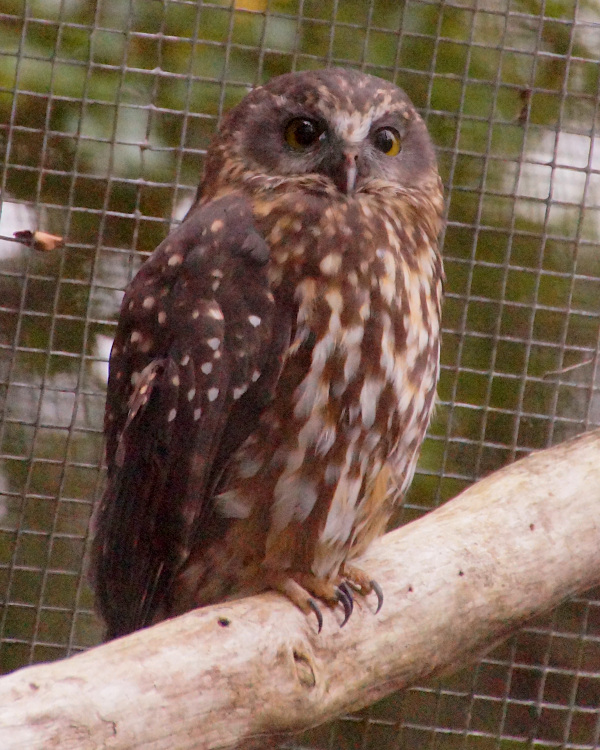 Besides the Takahe birds, there are several other birds in the sanctuary. Above you can see the Morepork (also called the Ruru or Tasmanian spotted owl); New Zealands only surviving native owl. If you are lucky enough you might be able to spot this little owl in the wild. Best chances are during dusk, when it begins its nightly hunt for insects, lizards, moths, beetles, spiders, small birds, and rodents. Unfortunately so far we have seen one in the wild, and I actually don't expect to do so during the remainder of our trip. So being able to see one at the sanctuary was a great alternative.
The Morepork is a small brown owl found throughout New Zealand and Tasmania. This Morepork was named Ngakau Nui (Big Heart) and lives in the Sanctuary due to an injured wing and would not survive in the wild.

Aside from the Takahē, all other birds are here as they have been hurt or need support in some other way. The injured birds are rehailitated and if possible, released back into the wild. 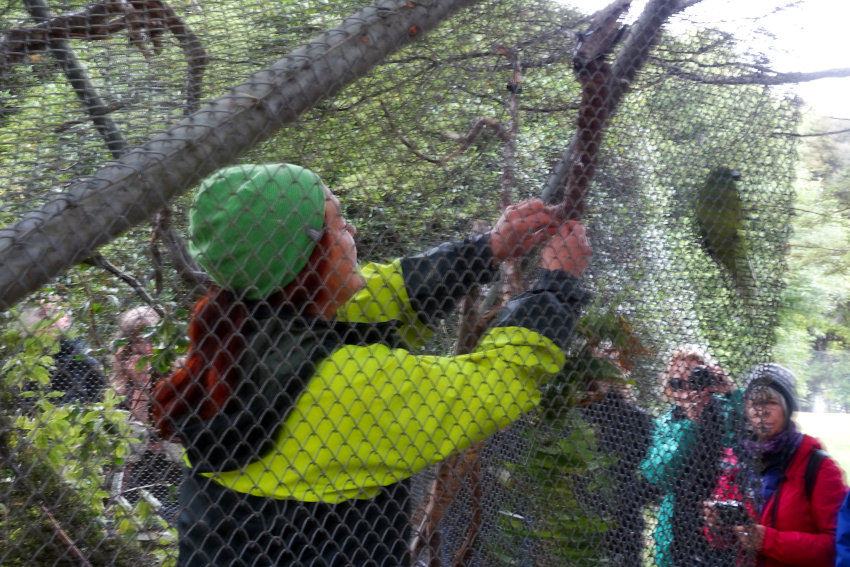 Te Anau Bird Sanctuary, guide in the aviary with the native parakeets

In the photo above you can see our guide in the aviary with the native parakeets. She was so patient with the birds, feeding them, while being bit in the ears of a parakeet (Ouch!), and still be able to smile and explain so much of the native birds that are being taken care of at the sanctuary :-) It was a really great tour of 45 minutes, and during this time I got great respect of the challenges these birds face in the wild and for the work the people do at the sanctuary. The entry is free of charge, and sanctuary is completely financed by donations, not an easy thing to do!

It is time for us to leave and wave goodbye to Te Anau Bird Sanctuary and all its inhabitants. But not before leaving a good donation for all the great work they do here. I hope it will help in a tiny way for this good cause and the the protection of the Takahē.

Driving towards the north 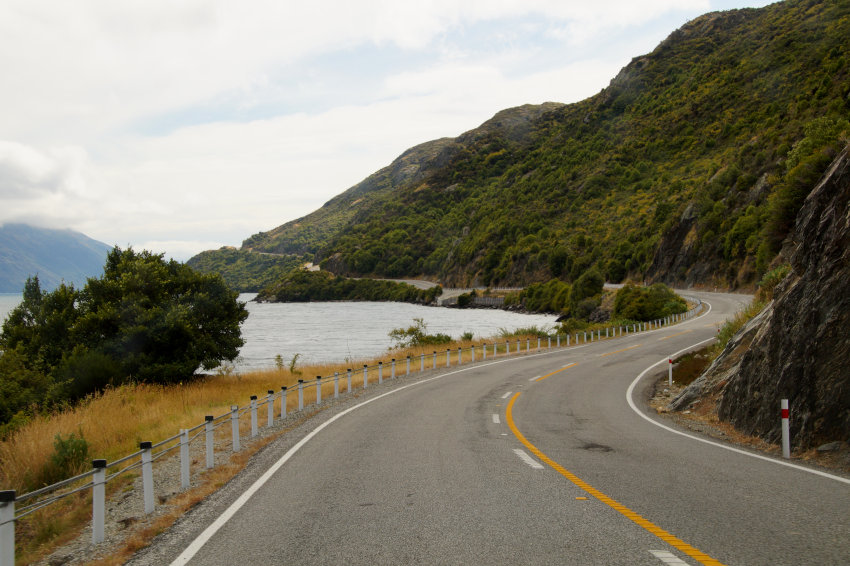 On the way to Wanaka town, Road is named Devils Staircase

From the birds sanctuary in Te Anau we had a 3 hour drive towards the north ahead of us, to the town of Wanaka. The day started of cloudy with some rain, but by the time we got around half way through our drive, we started to see some clear blue sky and we had great views from the curvy road, also known as the "Devils Staircase". 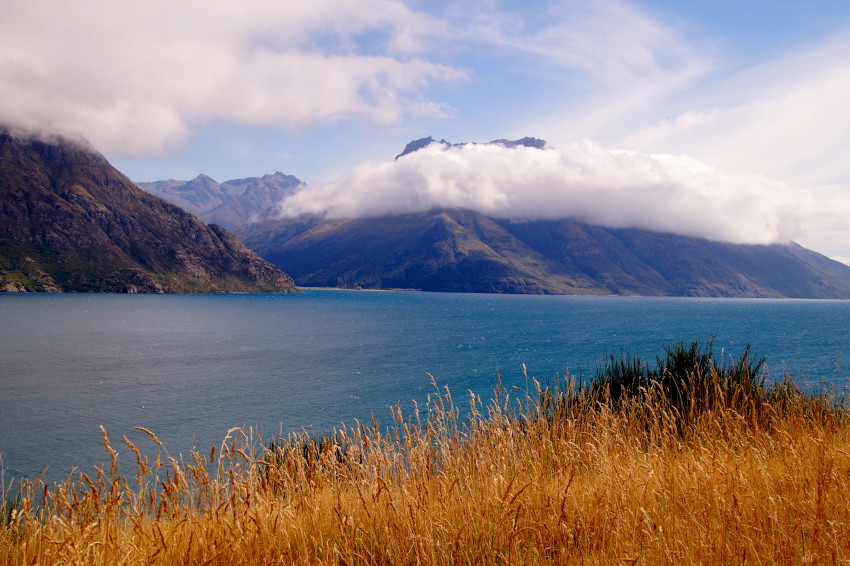 The contrast of the colours, of the clear blue colour of Lake Wakatipu against the golden yellow of the grasses, all framed by low hanging clouds that are clinging to the mountain tops was quite amazing. 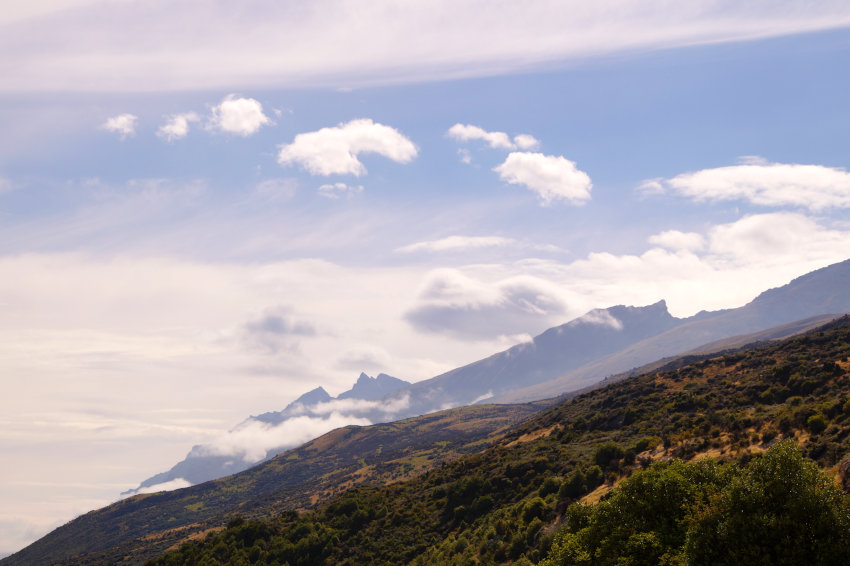 The light around the lake was strange and mesmerizing at the same time, no matter in which direction we looked. Needless to say that we took many stops on this stretch of road to take in the beautiful views and ever changing and fascinating skies. 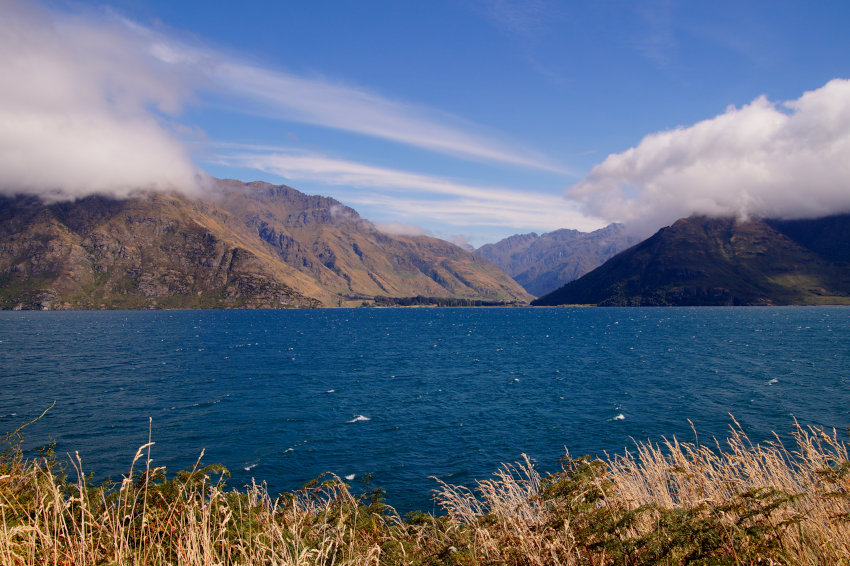 The further we drove along this stretch of road, the clearer the sky seem to become. 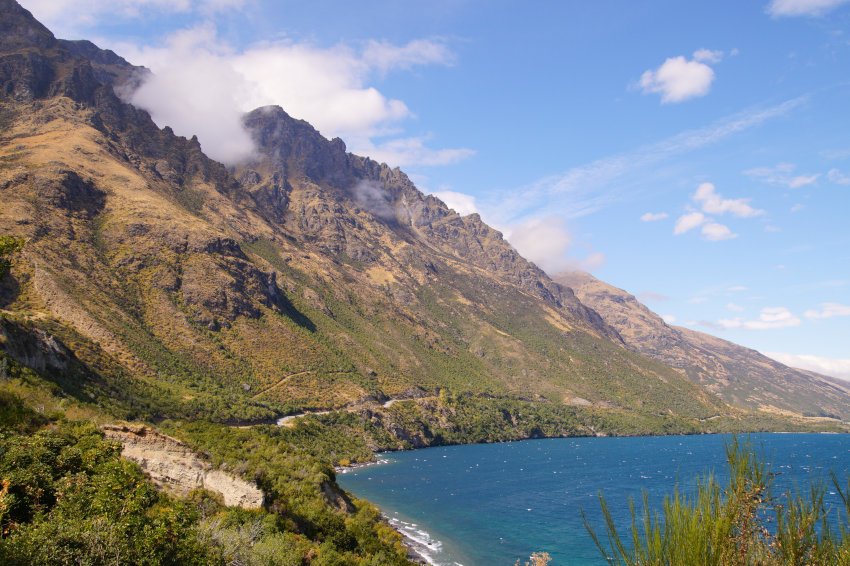 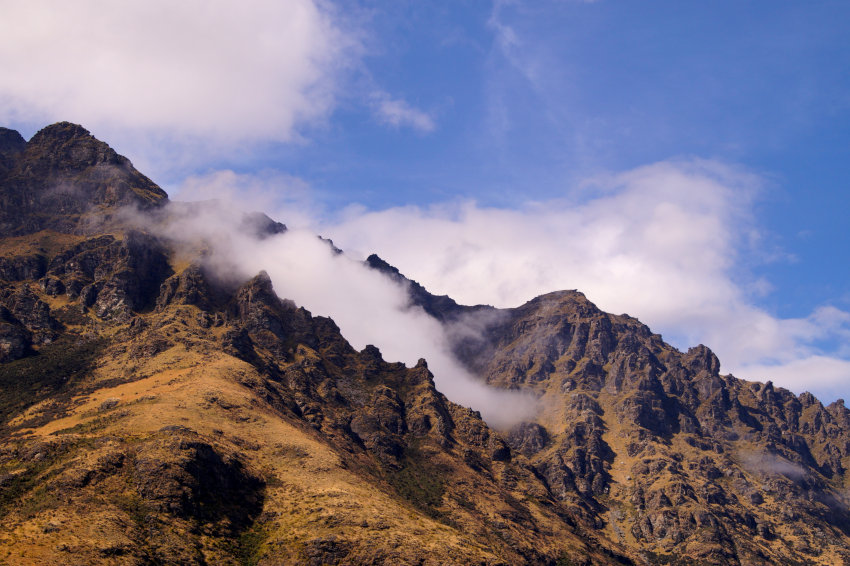 Our next stop on our way north is the historic town of Arrowtown, located just north of the city of Queenstown. But I'll write more about that part ot the trip another time on a sparate page.